Bespoked - The UK Handmade Bicycle Show moved from Bristol to Harrogate this year.

The Covid-19 pandemic didn’t just delay Bespoked, as it did other bike shows. It also saw the permanent closure of its habitual venue, Brunel’s Old Station in Bristol. So the rescheduled tenth edition took place instead at the Harrogate Convention Centre, 200 miles north.

The focus of Bespoked #10, although it included the usual displays from kit and component manufacturers, was the same as it’s always been: custom-built frames; ideas made metal; smooth fillets and artisan paint finishes; inquisitive customers. This year was a little different, and not only because there were no award presentations. The elephant in the room? The pandemic.

Custom builders benefitted to an extent from the same lockdown boom as the rest of the bike industry. “Last year was a very good year for us because the demand for bikes for very high,” Robert Wade from Swallow Bespoke told me. “Moving on from that, though, the pandemic is causing immense problems with the supply chain.” 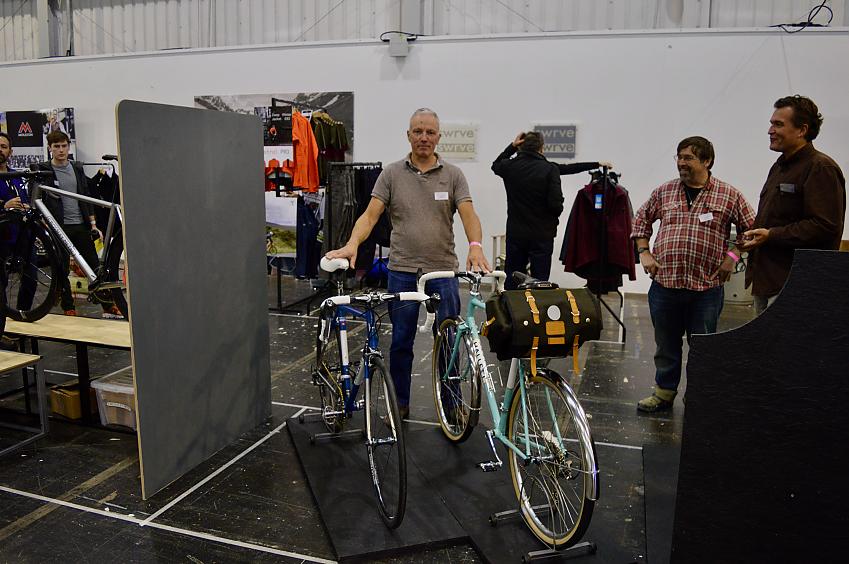 “It’s mostly components,” said Cycle’s own Richard Hallett of Hallet Handbuilt Cycles. “Even things like tyres. Continental, the last time I spoke to the importers, had almost no 700x25, 28 or 32C tyres. Madison, the Shimano importers: most groupsets there’s at least one component missing. So you can’t put whole bikes together. I’m saying to people, ‘I can only really build frames and forks until further notice.’”

It’s simple things like: there’s no derailleurs in the country, not that I can find. None of the distributors have got derailleurs. What do you do?

“The issue’s been with components, especially drivetrains,” Pi Manson of Clandestine confirmed. “It’s been a nightmare, and it’s got steadily worse.
It’s simple things like: there’s no derailleurs in the country, not that I can find. None of the distributors have got derailleurs. What do you do?”

The saving grace for framebuilders is that tubing supplies haven’t been as badly hit. Reynolds is based in the UK, Columbus in Italy, so the problem of shipping containers stuck in the Far East hasn’t stopped frames being built. “I’ve had plentiful supplies of tubing, brass, and gas,” said Pi Manson. “Because it’s just me [in the workshop], I’ve be able to work throughout the whole thing.”

Duncan Crossley of Crossley Metal said he was in a similar position. “It hasn’t affected me greatly because I’m a one-man band, and although my order book’s full I’m very slow, and I work from home.”

The bikes on display at Harrogate were influenced to a degree by the drought in derailleurs and other groupset parts. One of Richard Hallett’s bikes featured down tube shifters. “I built it up as a Rinko bike”, he said, “in case the petrol shortage meant I had to bring the bike to the show by train.” Both Pi Manson and Duncan Crossley were showing bikes with German-made Rohloff hub gears. And the Ironbridge 1779 that caught my attention on the Swallow Bespoke stand had a Pinion bottom bracket gear.

“We’d developed a Pinion-drive bike anyway,” said Robert Wade, “but the great thing about that is that it’s made in Europe in small quantities, and they can deliver within a reasonable space of time.”

He was effusive about the Pinion, as you might expect. “There’s little in the way of friction because it’s such high quality,” he said. “If this gearbox retailed separately you’re looking at £1,900. You get a lot of quality engineering for that. There’s very little maintenance to do and it will go on for thousands and thousands of kilometres.”

‘Jim’s full-custom tourer’ on the Clandestine stand had a Rohloff because the customer, Jim, wanted to reuse a set of 29+ wheels he already had in a new build, so he had the internally-geared hub. Clandestine had a derailleur model on show as well, but that was built before the pandemic.

The upright tourer on the Crossley Metal stand had a Rohloff hub because the customer “is a Rohloff guy,” Duncan Crossley said. “He’s got two or three Thorns with Rohloff hubs. But he wanted to have something specially made with a low step-over. He’s an elderly gentleman with short legs and a bad back.”

One of the pleasures of Bespoked compared to other bike shows is the range of bikes of show. There aren’t the same commercial pressures towards conformity. When a bike is being built for one particular person, it can follow a very different set of design parameters.

Case in point: Clandestine’s Jim’s full-custom tourer. “Jim has really specific ideas of what he wants from a touring bike,” said Pi Manson. “He likes longtails for how they ride, because they position you right in between the wheels. I’ve been calling this a midtail. The extra length of the chainstays means it’s really comfortable.”

Other features include: a built-in rear rack, capable of carrying any load Jim can stuff into his custom panniers;  a truss fork designed to accommodate a Carradice saddlebag; custom cranks with a BMX axle that’s easy to maintain with minimal tools; and a custom quill stem that puts the handlebar up high.

“That’s a fundamental focus of Clandestine and the work that I produce,” said Pi Manson, “to position people, normal people who aren’t racing triathlons, in positions that are comfy, and that they can ride long distances or day after day. And not have problems with their backs or necks or knees. So much of that, for me, involves getting the bars up higher.” 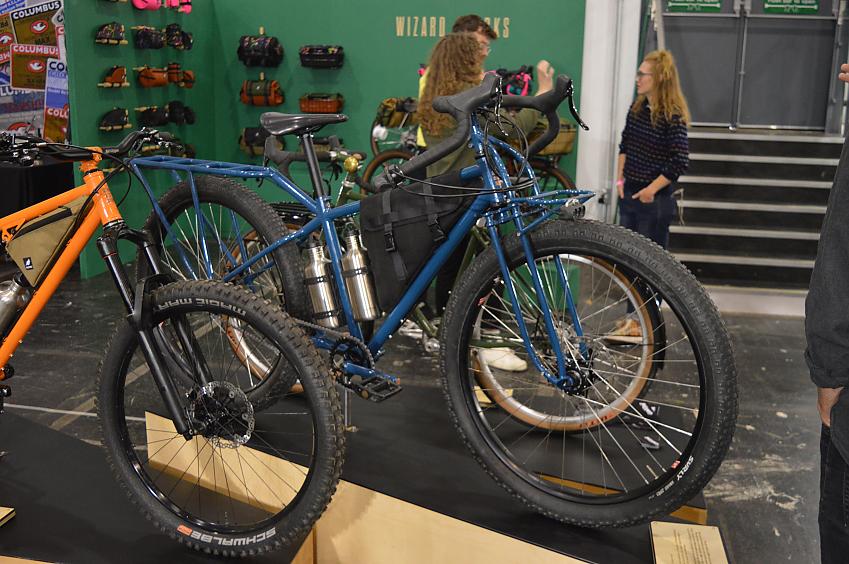 Crossley Metal’s touring bike also featured a handlebar high enough to give slammed-stem racers vertigo. Why? It was what the customer wanted and needed. “He’s got a very upright position,” said Duncan Crossley. “I’ve been doing a few bikes with tall head tubes lately. It’s an aesthetic challenge to make that balance. With this extra strengthening tube, it fills the space quite nicely. On his other bikes, he’s got six inches of stacked spacers, and a special angle stem.” 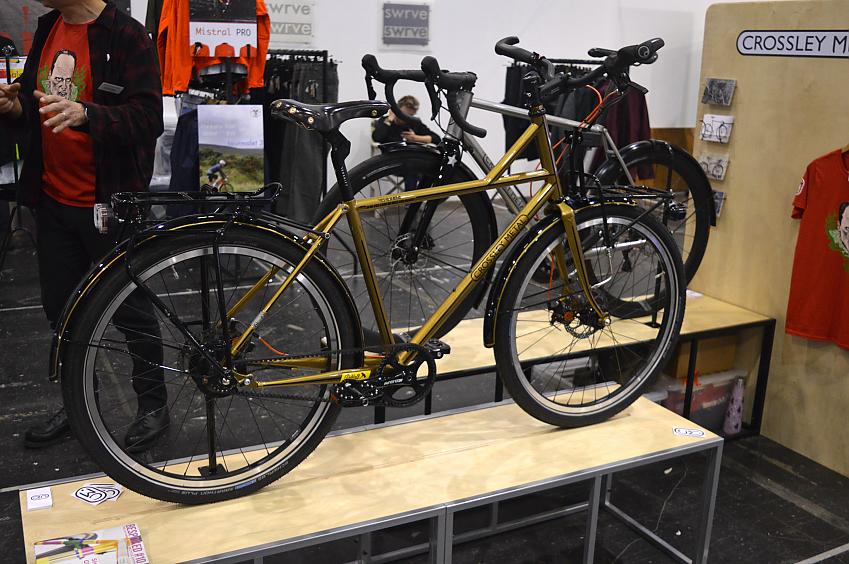 People buy custom bikes for lots of different reasons. One common denominator, however, is that the bike must fit – and fit well. “We’ve had a lot of customers who have come to us who have had a bike fit, bought a big manufacturer’s bike, and then come to us to get refitted because the fitting is wrong for them,” said Robert Wade.

Function is only part of the equation, of course. Few people would invest in a bespoke bike if it didn’t also pay attention to form. Who wants a custom bike that isn’t, on some level, elegant? Sometimes that’s the only driver. More often it’s a mix, as Duncan Crossley acknowledged: “I see my goal as to take somebody with a long list of requirements, and maybe a challenging body type as far as the aesthetics of the bike go. How do I make this customer’s bike beautiful and also fit?” 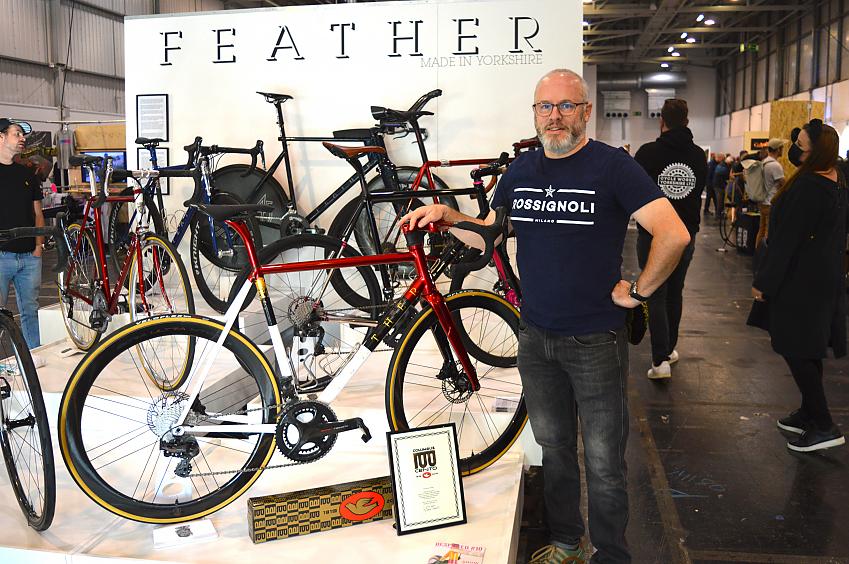 The next Bespoked takes place from 14-16 October 2022 at the Lee Valley Velodrome in London.