Shona Black with her tandem

Tandems had a starring role at the recent Paralympics where Team GB’s cyclists enjoyed huge success. But you don’t have to be an athlete to be an everyday hero: find out why people across the UK are taking to a bicycle made for two with Cycling UK groups and how you can join them

Exercise and the social aspect of riding with others are two good reasons to join a tandem group. But for Shona Black of the Vie Velo club, the appeal is plain and simple: fun!

“I love it, it just gives me a sense of freedom… I feel like it's a pity my pilot can't see me when we're cycling as I've always got a huge grin on my face.”

Shona, who is 57 and has a visual impairment, rides regularly with the club, which is based in Edinburgh and the Lothians.  As well as the pleasure of being outdoors, hearing birds singing and feeling the wind in her face, Shona appreciates the health and fitness benefits of cycling.

“I’ve always done lots of walking, whether that's just walking the dog or hill walking, so that’s kept me fit. When I’m cycling I’m unusual as I love the hills, unlike most pilots who dread them. I think: ‘Let's go, yeah!’”

The coronavirus crisis put the brakes on Shona being able to cycle as group rides were cancelled for several months during the lockdown period in 2020. She described how the club adapted to allow members to continue riding together.

“When we were allowed to restart, we put procedures in place to limit contact with others and we also tried to keep people in 'bubbles' as much as possible.”

Having the support of fellow club members helped some of the group, especially those who live alone, to cope better with the isolation caused by the lockdown.

“Before things were opened up a little, being in the club definitely helped some people get through the whole situation. The social side of Vie Velo is important and a big part of it. It's just nice to chat with like-minded people: you go out cycling and you have a nice coffee and a chat and then you know you are back on the road again.”

You don't have to be a superhuman or amazing cyclist – there are two of you after all!

Shona also found that restarting the group rides gave her a huge boost in terms of wellbeing.

“I was finding it really hard not being able to cycle at all as you can't socially distance on a tandem.

“When we were able to get back outside again, it made such a huge difference for me personally and was so good for my mental health.”

Although Shona is very fit, she emphasised that Vie Velo and other tandem groups are inclusive and open to people of all fitness levels and abilities.

“I feel that one thing that might put people off coming forward is thinking, ‘Well I'm not fit enough, I don't think I could do that,’ but you don't have to be a superhuman or an amazing cyclist – there are two of you after all! We need people of all shapes and sizes to match with the other rider on the tandem and we particularly need women pilots at the moment.

“You must be able to ride but communication is the most important thing as the pilot has to tell the stoker when things are happening, like bumps or hills.”

One advantage of being on the back on the tandem, according to Shona, is the ability to mentally relax and just enjoy the experience.

“I can relax because I don't have to think about anything other than moving my legs with no steering to worry about, I’m just pedalling.” 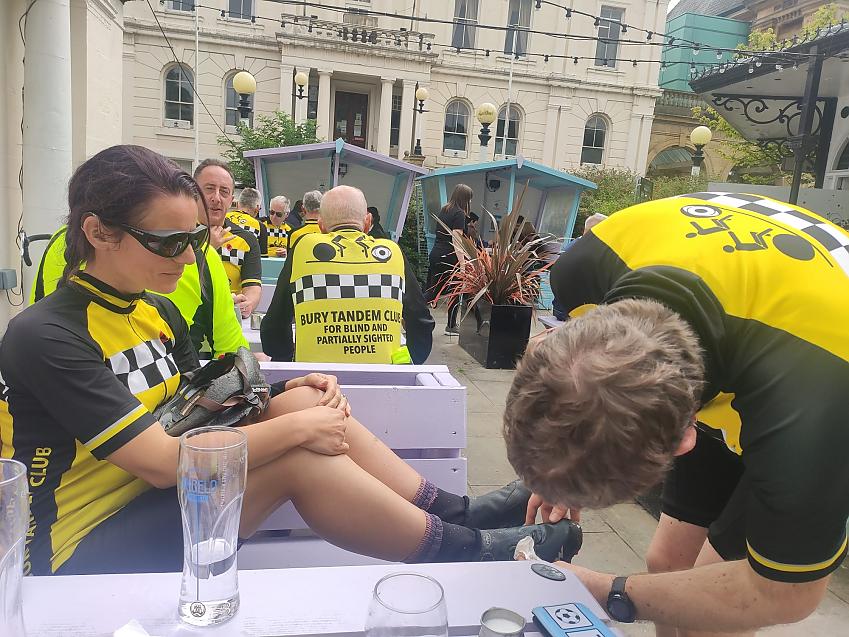 Rashid Khan also discovered the ability to mentally switch off when riding on the back of a tandem with Bury Tandem Club.

“I feel I can just zone out on the back of the tandem as I don't have to worry about too much apart from pedalling. I know it may sound strange but occasionally I use tandem cycling as a form of meditation, focusing on breathing and calm, relaxing thoughts.”

Positive experiences like this are particularly important to Rashid, 41, to help manage his serious mental health condition.

His introduction to tandems got off to an unpromising start, on a cold and wet evening in January 2019. Attending a workshop when hailstones started bouncing off the roof, his cousin Wasim questioned why he was there.

Rashid’s reply summed up his motivation for taking part: “I don't know about you but I'm here to relive my lost childhood!"

Having cycled as a child, Rashid felt that his freedom had been lost when he had to stop riding due to deteriorating vision just before starting secondary school. Until that night in Bury, he had not cycled for 28 years.

He said: “That rainy, cold, windy Wednesday evening was like revisiting my childhood but even better because as a child I had never cycled on the road.”

Despite initial anxiety about riding behind a stranger who was responsible for both of their safety, he soon relaxed and started to enjoy what was around him: the smells and noise of the rain bouncing on the ground; the lights from cars and street lights.

“I was absolutely mesmerised!”

Rashid went on to take part in more group rides, enjoying the camaraderie of riding together and the fitness and other benefits of cycling.

“I want to say thank you very much to Bury Tandem Club and everybody associated with it for making my life a lot better both physically and mentally, and also making me healthier and fitter in the process.

“Cycling is a natural anti-depressant and I encourage anyone to give it a go”. 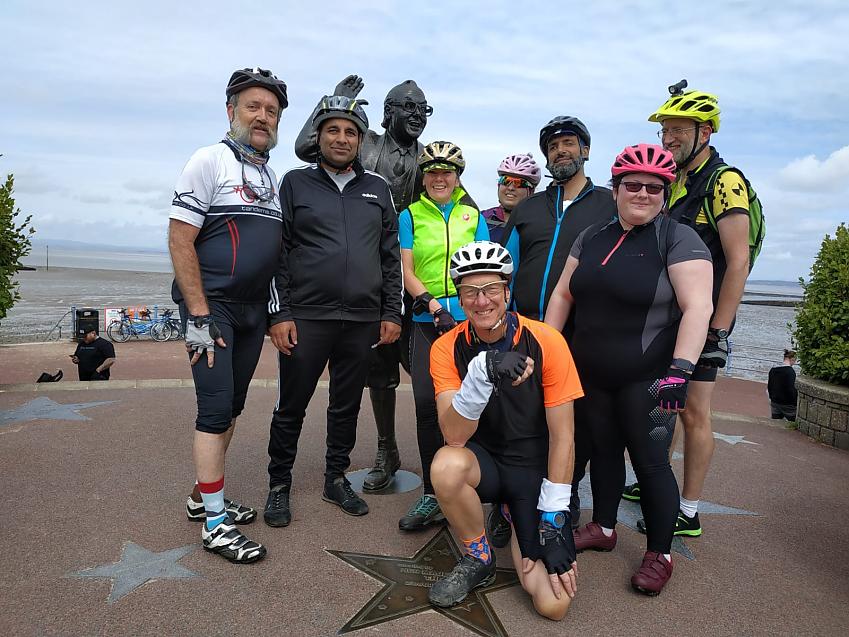 A little further east, Judith Broug was excited about showing off her newly acquired tandem along with her partner on the hills of Yorkshire. That was until she discovered Tandem Trekkers, a local charity cycling club for sighted and visually impaired people which convinced her to expand her horizons and give it a go as a volunteer pilot.

Despite initial fears that she might not be fast or fit enough, Judith, 44, was welcomed to an induction event where she was paired with a visually impaired rider.

She soon learned that the most important aspects of piloting a tandem are the ability to cycle confidently, spare time, a sense of humour and… serious waterproof gear.

“These stokers are hardcore! Enthusiasm knows no bounds in this cycling club, and rides are that important that a downpour won't stop this lot; I've not yet discovered what will!”

Judith was proud to receive her “pilot’s licence” as she was approved as a pilot with the club.

On her first full ride the following week, she loved the experience of spending time with a fellow cycling enthusiast. But her enjoyment of the ride came with the added opportunity to gain a new perspective of how a visually impaired person experiences cycling.

“What makes it unique is to hear about people's sight-loss journeys and the importance of the Trekkers to them. Equally special is the incredible trust people place in you – that touches me greatly.”

Judith is getting to the stage where pointing out puddles or guiding her stoker through a doorway becomes second nature but admits that she still has some way to go.

“I still make mistakes but all this is met with laughter and I am learning with the help of my stokers!”

She sums up the sense of togetherness that cycling brings to her club:

“It's nice to think, perhaps, that for a brief moment, there are no barriers to sharing something that gives such pleasure... at least that's what I think happens.”

And Judith would encourage anyone interested to give it a try.

“This club is diverse and welcoming with the focus on sharing and I like to think I have made some new friends.

“I hope others feel inspired to share their passion this way as it will enrich your life and make you think about how different the world can be if you don’t have full vision.

“You don't need a tandem; you just need the willingness to try something totally different and you can show off to everyone about the fact you're a pilot too!”

More information below on volunteering for the groups mentioned in this article:

Cycling UK is also promoting volunteer pilot opportunities in many areas of Scotland and on Merseyside.

Find other Cycling UK volunteering roles in your area by looking at the latest opportunities.