My favourite ride: Abergavenny and the Three Peaks

A dramatic climb...but rest assured it’s not all uphill! The Tyla, aka the ‘back way’ up the Blorenge mountain.
By jackthurston
Friday, 8 April 2016

My favourite ride: Abergavenny and the Three Peaks

Cycling journalist and author Jack Thurston shares one of his favourites from his latest book of great rides: ‘Lost Lanes Wales’. This ride, close to Jack’s home, is a deceptively laid-back circuit from Abergavenny, Wales’s self-proclaimed capital of cycling, with an optional sting in the tail.

Every year since 1963, fleet-footed fell runners and hardy hill walkers have beaten a path to Abergavenny for the Three Peaks Trial, a mountain marathon to the tops of the Sugarloaf, the Skirrid and the Blorenge, the three hills that lend the town its somewhat alpine atmosphere. This ride takes in the same three peaks, although only summits of one of them, and there’s even a bail-out option for those who dislike climbing.

Setting off from Abergavenny the road heads uphill past Maindiff Court, a country house where Adolph Hitler’s deputy Rudolf Hess was held during the Second World War. Apparently he was a keen rambler and spent long hours exploring the area, at complete liberty from his captors.

The first hill on the menu is the stark, shattered sandstone ridge of the Skirrid – the Holy Mountain, St Michael’s Mount or, to give it its proper Welsh name, Ysgyryd Fawr. Legends abound: some say the mountain got its distinctive shape when it was rent in two at the moment of Christ’s crucifixion; others that the devil caused the landslide by stamping his foot; or that it’s Jack o’Kent’s heel print from when he leaped across from the Sugarloaf. In medieval times people made pilgrimage here, and during the Reformation Catholics held clandestine masses in the ruined chapel on the summit.

It’s not possible to ride to the top, so the route skirts the hill’s western flank before descending to cross the River Gavenny at Llanvihangel Crucorney and begin the climb towards the Sugarloaf.

Sometimes the best bike rides are not the ones that follow the most direct route from A to B, but those that take the long way around on the lanes less travelled. 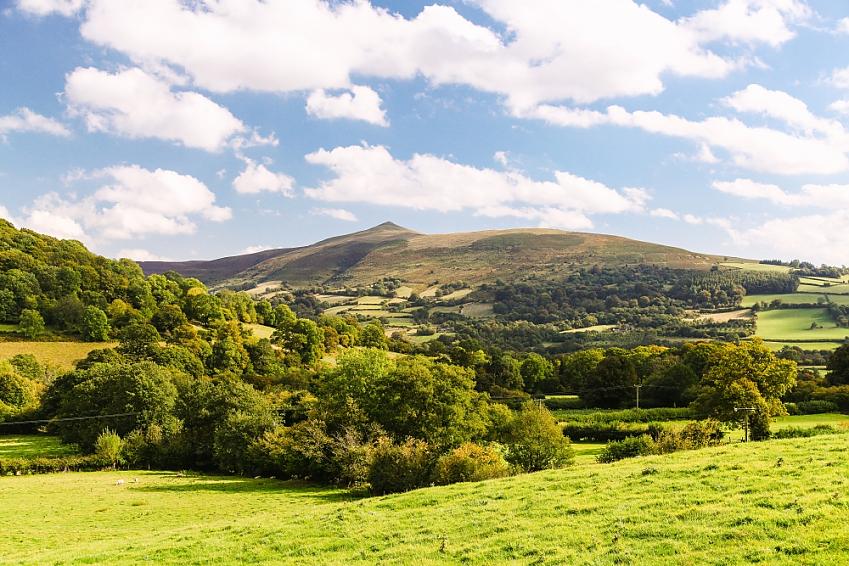 The iconic Sugarloaf mountain, a firm favourite among mountain bikers.

The summit of the Sugarloaf is firmly mountain bike territory so this touring route is more of a circumnavigation. A miniature Fujiyama, the Sugarloaf is a good-looking mountain from any direction, but the view from the north is especially impressive in late summer, when its flanks are a purple haze of heather. There’s an optional short but steep climb to Patrishow where a perfect little church, a hermit’s grotto and holy well perch overlooking the valley of the Grwyne Fawr, one of the long streams that drain from the Black Mountains into the Usk.

Sometimes the best bike rides are not the ones that follow the most direct route from A to B, but those that take the long way around on the lanes less travelled.

In this spirit, a scenic detour up the Grwyne Fechan is more than justified as it may be the loveliest little valley in the Black Mountains. The narrow lane winds up the valley and romantics will want to carry on up to the top to explore the ruin of a grand Georgian house known as the Hermitage. Its grandeur is quite out of place at the top of a remote Welsh valley. It’s said to have been built by John Macnamara, a wealthy gambler and infamous libertine, to house his mistress in splendid isolation.

The descent is through Llanbedr and Llangenny and halfway between the two villages is a secret swimming spot. It’s off to the left of the lane – leave the bikes at the top and follow the public footpath down a steep, wooded bank and across a stone packhorse bridge, then turn left to find a small beach beside the meadow. Beware, as even in high summer the water is bracing (Pic left: Jack enjoying a 'refreshing' dip).

Past Llangenny, it’s a fast descent to the A40 at Glangrwyney. The road to Gilwern crosses the Usk on a rickety box girder bridge that looks like it’s been dropped in from a Bobbie Gentry lyric, and the derelict paper mill, half hidden in the trees on the banks of the Usk, adds to the Southern Gothic vibe.

After skirting around Gilwern, the route negotiates the Heads of the Valleys Road, the big physical barrier in this part of the Usk valley, taking a path beneath it. Climbing through Govilon the route crosses the disused Heads of the Valleys railway line and this is the bail-out point for anyone who doesn’t fancy the leg-busting ascent of the third peak, the Blorenge mountain, that lies ahead. Just follow the railway path (National Cycle Route 46) to Llanfoist and Abergavenny.

Else, continue up the lane, enjoying the ever expanding horizon on the climb out of the trees. In the world of cycling, the most famous climb on the Blorenge is the Tumble, up its northern face. This quiet, little known western ascent is known locally as the Tyla (pronounced Tiller).

On the way up, the narrow lane rounds Gilwern Hill, climbing high above the Clydach Gorge and through an eerie landscape of overgrown spoil heaps from the ironworks that once devoured the hillside. The road passes through the remains of Pwll Du, a village of mineworkers and quarrymen that was abandoned in 1963, its residents moved down the hill to Govilon. Beneath the surface is the Ogof Draenen, at 41 miles the second longest cave system in Britain and a magnet to potholers. Across the B4246 the road rises to crest the mountain by a pair of radio transmitters, from where it’s a long, eye-watering descent down the eastern side of the mountain, through beech woods and farmland to Llanfoist and back to Abergavenny.

All words and pictures are copyright Jack Thurston.

All words and pictures are copyright Jack Thurston.

A short cycle ride in the Dulas Valley, Wales View

Across Wales in winter View