Laura Laker getting a few miles in for her training to ride a Century (Photographer: Michael Jones)
By LauraLaker
Thursday, 28 July 2016

Cycling your first century is a milestone for anyone. So cycling your third should be easy, right? Cycling journalist Laura Laker gives her views on how best to prepare for a long distance ride

Cycling your first 100 miles is a landmark for anyone. Don’t be put off, though - although it is, needless to say, a long way to cycle and requires a bit of preparation - if you organise yourself and put in the work, it feels like one heck of an achievement once you’ve done it (it feels like an achievement if you finish it and don’t put in the work, but that way’s harder).

The Prudential RideLondon 100 sportive will be my second Century. It’s the third I’ve trained for, to varying degrees (last year’s RideLondon event was cut short by 15 miles), and is probably the Century I feel most prepared going into, having learned a thing or two on previous attempts.

Having finished last year feeling strong, and having learned from my mistakes, I wanted to do better this time, so, I harnessed my love of scheduling, and made a plan.

After weeks of preparation, three weeks before the big event, it finally started paying off and I had a breakthrough: 50 miles into a ride to Cambridge, I got pretty fast. Well, fast for me.

Pedalling along those flat, sweeping roads, with 15 miles left to go I felt, briefly, invincible, riding at possibly the fastest speed I’ve ever cycled on the flat. I was so overjoyed at my newfound strength I found myself whispering “yes, yes, yes” out loud.

I had the creeping suspicion that those weeks of preparation were finally paying off.

So what have I learned? How do you set about preparing for a long ride?

Everything starts with a plan. Generally, getting in three rides per week is a good rule – and this is manageable if you do one long weekend ride and two shorter ones in the week. More details in a bit.

The key thing for me, in terms of sticking to the goal, was putting those three weekly rides into my calendar at the planning stage – the type and duration of the ride (see the table), and the day of each week I’d do it. This may not float your boat, but I had a separate colour on the calendar for my training programme, that I could refer to easily as I went. Having yoga there every Monday, and my three rides during the week, somehow made it non-negotiable.

Your training doesn't have to preclude other weekend plans, and it can be quite fun to ride in new areas, if you can get hold of a bike, or bring your own. I managed to be quite creative in fitting training rides into other weekend plans, including cycling to a friend's wedding outside Bristol, with a pre-prepared crumple-proof dress stuffed in one pannier. In week three I went to the Hay on Wye literary festival with some friends, hired a bike locally and sneaked in a 44 mile ride before heading home.

Start from where you are

Start according to your fitness level and build up. It goes without saying – you’ll avoid injury and, by steadily increasing the training load, allow your body to adapt each time you step it up. Make the rides challenging, push yourself; last year I pottered up and down the canal for weeks, not really pushing myself, partly excused by a weak ankle I couldn’t put much pressure on, but injury aside, if you extend yourself, and push your limits, the training is much more effective.

Start early. Eight to ten weeks is a good run-in period for a Century - but remember you’ll need to keep training up until the event, so make the plan achievable, and factor in fun and rest time.

Move during the off-days. After my successful Cambridge ride, the next weekend’s long ride was a grinding, moral-sapping slow affair on stiff legs as I’d done nothing physical for three days. Do yoga, walk, dance – anything to keep moving. Doing something non-linear, that uses different muscles, will help you balance out those long hours in the saddle doing the same movement, and help support you on the bike.

Now to the rides themselves, which I broke into three categories:

The bulk of your training. Though you’ll most likely do the long ride on a weekend, it can be done any day of the week, so long as you do it. Start with a couple of hours’ riding, or more if you’re fitter, and build up by 5-10 miles each week, to around 85 miles. Do these rides at a steady pace, around 70-75% of your maximum heart rate, equating to a moderate effort, somewhere between where you can hold a conversation (70%), and the point at which you can only manage shorter sentences.

I mapped out my own routes, and joined a local club, which was sociable, helped me ride faster and accustomed me to riding in a group.

This shorter weekday spin will help you beef up your weekly mileage gradually and get you used to riding faster, for increasingly longer periods of time. Start with an hour or so’s ride, and increase by 15 minutes each week until two weeks before the event, when you’ll start to taper. Ride at 80-85% of your maximal heartrate, i.e. at lactic threshold, as if you’re riding with someone faster than you, for 15 to 30 minutes, with 15 minutes’ easy pedalling to recover.

In all honesty this was probably the ride I was least strict about keeping to, and probably should have taken more seriously, as this type of training is one of the most effective in building endurance fitness.

This, for me, is the game changer, though perhaps the least intuitive, given a Century is an endurance event. This weekly ride will increase your lactate threshold, i.e. the point at which your muscles start screaming to stop, so you can ride faster without it hurting.

I can’t recommend spinning (static cycling) enough. It’s hard, and you may not like it at the time – or me for suggesting you do it – but by heck it works. Spinning is the cycling equivalent of High Intensity Interval Training (HIIT), a series of short, maximal or near-maximal efforts of 30-90 seconds, interspersed with brief rest periods of roughly double that time.

The great thing about static cycling is you can control these efforts. If you’ve got a turbo trainer at home, and know what you’re doing, save yourself some money. If not, and it’s within your budget, having someone yell at you in a class to pedal harder, directing your efforts, and fellow sufferers to race against, is properly motivational. Don’t overdo these sessions – though they pay off, too much training in this zone can cause exhaustion.

All my speed rides were the same duration, because they were spinning classes. If you’re out on the road, you can start from an hour’s fast ride, build up to an hour and a half in 15 minute increments, then taper down by 15 minutes in each of the two weeks before the event.

Training is placing your body under stress, and resting allows it to adapt. The increase in exercise will make you tired, and while this is also a sign you’re pushing yourself and getting fitter, listen to your body; if you need to back off, it will tell you. 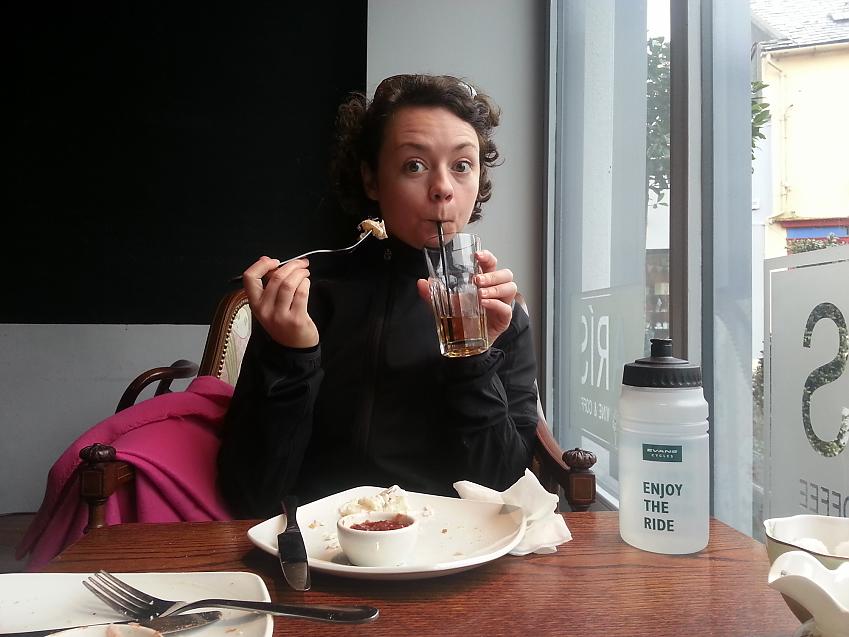 As with all physical activity, your body is the engine, and it’s only as good as the fuel you put into it. It goes without saying you should eat a balanced diet, limit your intake of processed foods and refined sugars, and eat plenty of fruit and veg to fight those free radicals from long hours in the saddle. Lean protein such as chicken, fish or pulses, will help build and repair the muscle you’re training. Stay well hydrated, too, but avoid having too many sugary drinks as these add unnecessary, nutrient-poor calories, as well as being bad for your teeth.

During the ride, people go for a variety of fuelling options to replenish carbohydrates, from lo-fi, but perfectly effective, jam sandwiches, to specialised but pricier gels, to jelly babies. Use your training rides to learn what works for you.

After an hour or so, intersperse water with something to replace lost salts; isotonic sports drinks, or dispersible tabs, will hydrate you more effectively, and improve your performance.

Post-ride, consume some protein within 30 minutes of stopping exercising; that’s the golden window within which your body is primed to fast-track muscle repairs and it will aid your recovery. I had a soy protein shake, mixed with pineapple juice; again, find what works for you.

Taper. Reduce the intensity and duration of training in the last two weeks before the event, to leave you fresh on the big day, but remember to keep moving to avoid stiffness.
Bonus tip: I got myself realigned by an osteopath a couple of weeks before the ride, to straighten out my tight back. I’d highly recommend this.

Although 100 miles is a long way, and it’s a challenge, it should hopefully be fun, too. Remember to enjoy the big ride, smile, and keep pedalling and, if you’re doing the RideLondon 100, savour the traffic-free roads, the encouraging crowds cheering you on, and the camaraderie of the other riders. It’s an experience you won’t forget! In a good way. 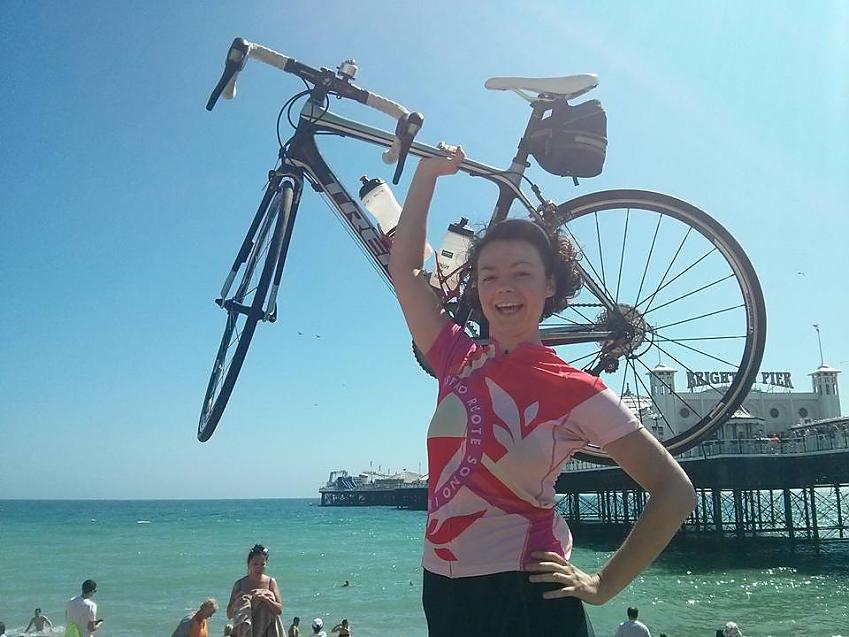 Laura Laker is a freelance cycling journalist who believes far more everyday journeys should be accessible by bike - and not just for the quick and the brave. She has written for numerous cycling and non-cycling titles, from the Guardian to Good Housekeeping, to road.cc and BikeBiz, as well as making the odd TV appearance on Sky News and elsewhere, advocating funding and infrastructure for cycling. She is happiest pootling through the countryside, but is most commonly seen cycling around London - and most of the time enjoying it. Twitter: @Lakerlikes

I’m glad I had: A comfortable bike that fits me, and weeks of preparation behind me

Next time I would: Do more of my training rides at a higher pace; I got lazy on some of these and took the easy, leisurely ride option.

Further info: The public ballot for RideLondon 100 2017 opens on 8 August, or you can sign up with one of the charities offering places on the ride, in exchange for fundraising for you. Cycling UK is among these charities. You can find out more at: www.prudentialridelondon.co.uk/events/100/entries

Charity rides: Advice for cycling from London to Paris View

Spinning along on the Windmill Rides in Essex View
Cycling UK continues to support the UK to cycle
This remains true during this difficult period with the ongoing threat of coronavirus Covid-19
Read our latest advice on cycling
Join Cycling UK to help us change lives and communities through cycling
Membership gives you peace of mind insurance, discounts in cycle shops, rides & routes
Join now