The climb out of Allenheads
By Rob Ainsley
Saturday, 1 December 2018

C2C veteran Rob Ainsley profiles the six Sustrans routes across Northern England, plus another for mountain bikers and some do-it-yourself options.

There’s an elegance and simplicity about a coast-to-coast, an essence of cycle touring. Inland termini don’t have the same defining sense of embarkation and arrival.

It’s quintessential Britain too: a slice across everything between the endpoints, from sociable market town to wilderness. And it’s a zero-sum altitude game that takes you over mountains but finishes back at sea-level.

Up at the thorax of England, Irish and North Seas are only 80 miles apart. A coast-to-coast jaunt packs scenery, adventure and sheer fun into one long weekend – and can be as easy or challenging as you like.

There are six ‘official’ coast-to-coasts: ones signposted, and patchworked with cycle paths and facilities, under the auspices of Sustrans. Each takes three to four days.

A sort of bicycle parallel to Alfred Wainwright’s celebrated coast-to-coast walking route, which helped establish the whole side-to-side cult, this too takes you through a pattern-book of North English landscapes (coast, Lakes, vales, Pennines, post-industrial, coast). Created in 1994, it’s England’s most popular leisure cycle route, with 12–15,000 doing it every year, especially charity groups.

It’s the best all-purpose coast-to-coast: a challenge, but well-supported and achievable by the averagely fit, and good for mixed-experience groups. The middle third is fairly tough, with steep road climbs up to Hartside (580m; you’ll be grateful of the summit café) and outside Nenthead (609m, the highest point on the National Cycle Network). The last third, as reward, is all off-road (mostly rail-trail) and gently downhill with, usually, a big fat tailwind.

Sturdy tourers, hybrids, or touring-friendly MTBs cope easily. Road alternatives for the handful of roughish tracks exist for audax-style riders, though they may prefer simply plotting their own fast, tarmac route.

Rider camaraderie is great, and the route generates stories. On one of my C2Cs, I lost a roll of film from my rucksack off-road up Hartside. Another rider found it next day, developed it, and sent a photo of what he guessed was the owner to a bike magazine. Someone recognised me, and I got my photos back!

Tim Woodcock’s off-road-cycled equivalent of Wainwright’s traverse was featured in the April/May 2010 issue of Cycle. It’s a tough route: four days to a week over some testing terrain with 10,000m of climbing.

This needs experienced, fit MTBers with strong machines, and rucksacks with basic survival stuff in addition to a change of clothes, spares and tools, water and food: the weather changes up in the fells can catch anyone out.

I preferred walking the Wainwright to doing it this way – I want to watch the scenery, not the singletrack – but for adrenaline junkies, this is the most thrilling way to cross Britain. Order the information pack or find out more about it online at www.mbruk.co.uk or www.sustransshop.co.uk.

Conceived as a ‘return C2C’, the western quarter amiably skirts the north Lakes to Carlisle, while the eastern quarter lies in pleasant, if not always remarkable, rolling countryside roads outside Newcastle.

The main interest is the highly scenic middle half, in the remote woods round Kielder Water, by (and occasionally the other side of) the Scottish border. There’s a few miles of stony forest tracks and, at one point, rough singletrack. Without an MTB you’ll be pushing some stretches here. (There’s a roundabout tarmac alternative.)

Think of this as a good excuse to visit isolated, friendly Northumberland. Spend an extra day or two exploring the forest tracks that circumnavigate Kielder Water with MTB or hybrid. (And perhaps, as we did, pubs in villages such as Bellingham...)

There’s less wall than you might expect for this route, which links sites and ways known to the Pict-busting Roman emperor (so wall-huggers may want to detour).

From curious Ravenglass and its Roman remains, a coastal wiggle reaches the now-invisible start of the wall at Bowness, amid marshy flats. Near Lanercost, the wall finally appears in its lumpy grandeur for several miles. The most awesome wall sections, the last, are around Once Brewed hostel. After characterful Hexham and its fine abbey, lanes and rail-trails (and a bridge curio at Ovingham) take you into lively Newcastle.

It’s not that hilly, certainly far less strenuous or spectacular than the C2C, and any tourer or road bike can handle it fine. Rush this and it’ll seem dull – it’s best enjoyed at leisure by explorers of history, psychogeography, and teashop towns.

Way of the Roses

This mostly-road route only started in 2010, but it’s already the second most popular coast-to-coast. It starts with a smile, at the Eric Morecambe statue on his namesake town’s huge promenade. Flat rail-trail through Lancaster and over the Lune Valley soon vaults up through sheepy hills into North Yorkshire’s dales: lots of feisty climbs – the lane out of Settle tested my breakfast – and epic scenery.

Until Ripon, that is, when everything flatlines. From here through historic York, and over to bucket ’n’ spade Bridlington, it’s uneventful stuff, apart from a gem of a wold outside Pocklington.

But despite the dull eastern third, it’s very recommendable, thanks to the range of camera-hungry scenery, calendar-shot villages and towns, and Yorkshire quirks en route (Brimham Rocks, Ripon’s hornblower, Devil’s Arrows, Rudston Monolith...). Especially for experienced road tourers, who’ll relish the ups and downs, take in the sights, and treat the flat finish as a fast home straight. It’s good for cycle-camping, too, though I nearly froze solid doing so in April! 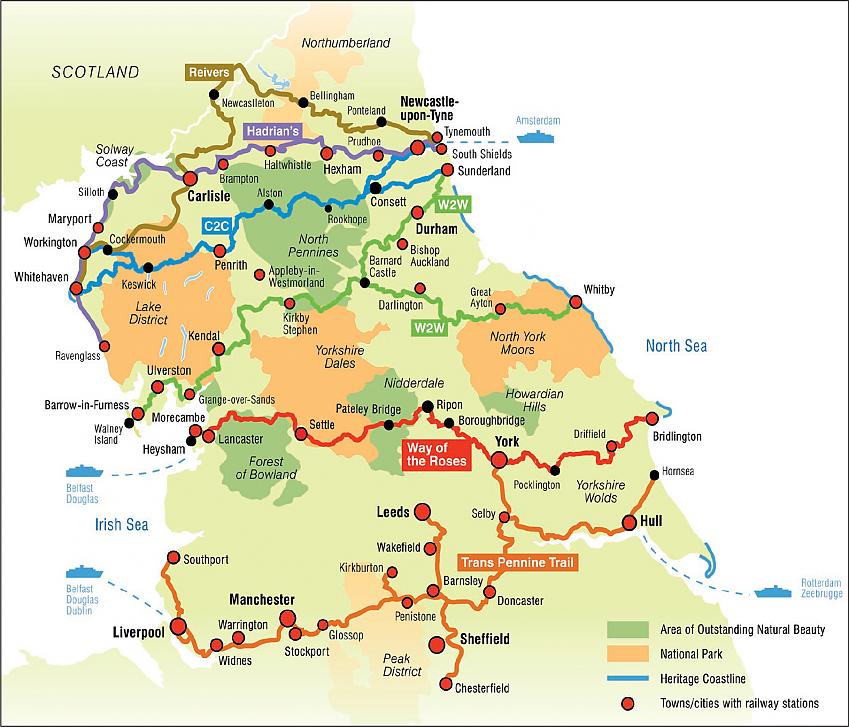 The easiest and most traffic-free of the lot: a patchwork of rail-trails, waterside paths and lanes that rarely require your bottom chainring. There’s a stony track at the very top, where a mile or two of bridleway takes you over Woodhead Pass; but you could do most of the TPT on a shopper, or indeed handcycle or trike (much is designed to take wheelchairs).

However, while some sections are delightful – west of Penistone, for instance – as a coast-to-coast it’s less than the sum of its parts. Day-riding families on MTBs, or multi-ability groups, will come away happy; experienced tourers doing the lot, less so. And from Doncaster to Hornsea, frankly, it’s boring; I had more interesting experiences finishing instead at Spurn Point, one of England’s strangest cycle rides. (Hornsea’s better for fish and chips, though.)

Walney to Wear and Whitby (W2W)

More strenuous than the C2C, this mostly lanes-and-quiet-roads route climaxes at the iconic Pennines pub the Tan Hill Inn, Britain’s highest. In between, Barrow offers quirky, free camping thanks to the King of Piel Island, and there are pleasantly scenic market towns such as Stan Laurel’s Ulverston; while options at the eastern end offer you a skirt of the Moors into Whitby, or a finish via Durham into Sunderland (where sabotaged signposts make maps a good idea).

For the seasoned tourer who’s done the C2C and is looking for the next challenge, the W2W is it.

The fabulous scenery – weather permitting! – that gets even better as you go east from Kirkby Stephen comes at a cost in hill climbs, but for the seasoned tourer who’s done the C2C and is looking for the next challenge, this is just the thing.

Other Sustrans coast-to-coasts are available: Devon’s (Plymouth to Ilfracombe, 70 of its 100 miles being off-road) is a delight, with lots of well-surfaced rail-trail. The long final traffic-free descent into Ilfracombe is a real highlight.

But, in the spirit of Wainwright, why not devise your own route? My own best coast-to-coast experience was a spontaneous, on-road, nose-following tour from Ravenglass to Ravenscar, north of Scarborough, last March: three utterly blissful days of Lakes, Dales and Moors.

Similarly, Barmouth to [Great] Yarmouth, linked by five days of cheap Travelodge rooms (£12 a night in January!), took me across a quietly satisfying slice of Wales and middle England. And Barrow to Jarrow – from officially England’s most working-class town to the home of the Marches – mixed awesome scenery with everyday northern culture.

You can hardly go wrong in Britain. There’s a whole world between virtually any two shores. And we all know the best way to explore it...

This was first published in the December 2012 / January 2013 edition of CTC's Cycle magazine.

Coast-to-coasts are generally done west-to-east because of the prevailing westerly wind. But during easterlies, or for return-trips, you can easily reverse them. With decent weather and care they’re doable all year, and their endpoints (except Hornsea) are accessible by train.

Getting to the start/finish

All train-accessible, but bike spaces limited: book well ahead. Transfer minibus services can take you, friends and bikes from Newcastle to Workington/Whitehaven or to and from the endpoints from bases elsewhere (e.g. www.sherpavan.com).

When to do it

Long slog up Hartside; rough track out of Rookhope.

Aberdeen to Ardnamurchan – A Coast to Coast Off-road Cycle View

Great Rides: West to East 1000km across the UK View