Great Rides: West to East 1000km across the UK

Oban seen from the ferry as the group headed east.
By NeilWheadon
Friday, 29 November 2019

Great Rides: West to East 1000km across the UK

Like the E2E and C2C, W2E – West to East – is another great British cycle ride. Cycling UK member Neil Wheadon took up the challenge with six companions.

The email sold me immediately: “Do you fancy joining six others on a cycle ride from the most westerly point of the British mainland to the most easterly?” Ardnamurchan lighthouse in Scotland to Lowestoft in Suffolk is a thousand kilometres, cutting a diagonal across Britain. The route would pass through two National Parks, two Areas of Outstanding Natural Beauty, and cross the Pennines.

So it was that one September morning some time later, seven of us stood with our bikes at Ardnamurchan Point. Pleasingly, there was a sign announcing its ‘most westerly’ location.

I’d met three of my companions before on CTC Cycling Holidays. On those holidays, I’m used to riding 50 miles a day. This trip would see some days closer to 80. As we pedalled to the ferry that would take us back to Mull, I had doubts as to how I’d fare. But we got off to a fine start, not racing away from the ferry but eating cake next to Tobermory’s picture-perfect harbour.

Since W2E is a mainland ride, a purist might omit ferries and islands. We were happy to take them where they improved the journey. Much work has been done building and signing cycle routes in Argyll and Bute, and our reward for following Sustrans Route 78 out of Oban was a glorious road past grazing Highland cattle with hardly a car in sight.

The hardest part of this trip was to link up accommodation that could house all seven of us but was also cheap enough to please the thriftiest pocket. An independent hostel was our goal for the first day’s riding. The road along the loch approaching it was beautifully surfaced, yet its steep ups and downs will live long in my memory.

The hostel provided us with a lakeside view, which we shared with a group of rugby players being pep-talked for a tournament the next day. For us, the following day involved another ferry so we were on a tight schedule. “It’ll be fine,” I told myself as we hared down the A83 towards Tarbert. Fortunately the ride was flat and fast, with only a small climb from Kennacraig over to Claonaig, and we made it in plenty of time for the crossing to Arran. We were joined by lots of racing cyclists on this sunny Sunday; they were doing a circuit of the island.

We visited Brodick Castle on Arran, confirming that it matches its picture on the Scottish £20 note. Then we caught our final ferry to Ardrossan, north of Ayr. It was another 24 miles to our Travelodge destination… We followed the 1:25k mapping on my Garmin into the city centre, switching from the Sustrans route to something more direct as the sun began to set. From Ayr, we struck south-east towards Dumfries, passing the old open-cast coalfields around Dalmellington, then enjoying open moorland to Carsphairn.

John McAdam of tarmac roads frame is buried here but we couldn't find his headstone. Maybe a few traffic cones would help? Moorland became farmland as we approached Dumfries and our hostel in the woods. There we enjoyed an evening meal of macaroni cheese and salad so plentiful that we filled our Tupperware boxes and dined on it the next night as well. 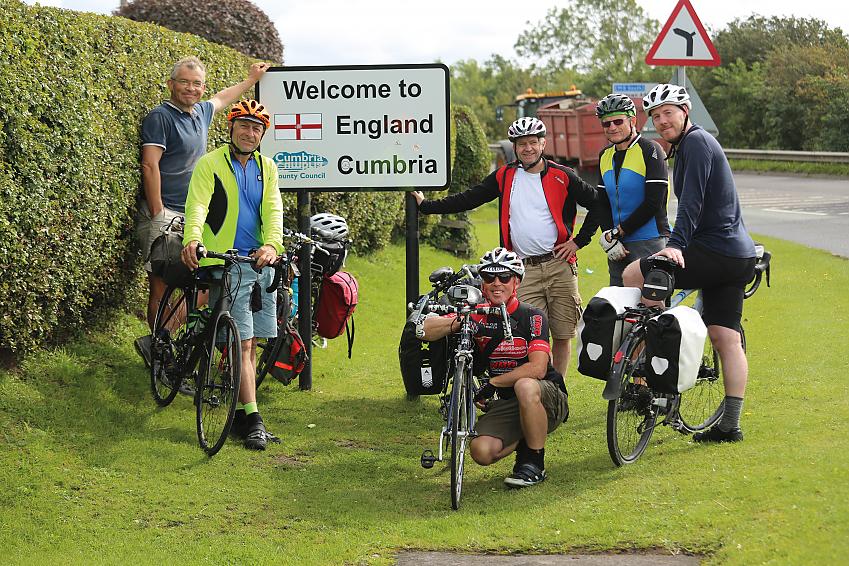 Neil and friends at Gretna Green

At Gretna Green, where the wedding industry has replaced agriculture in keeping the border in business, we bade farewell to Scotland. We took the A6071 towards Bampton and the head of the Eden Valley.

It’s probably my favourite place to cycle in the whole of England, and the ride south to Dufton didn’t disappoint. The Pennines loomed close on our left and there were glorious views of the Lakeland fells to our right.

From the YHA at Dufton, we set off for a former YHA at Osmotherly. Between the two were the climbs and descents of the Yorkshire Dales. We were in luck, however, with a 20mph westerly tailwind. We split up for this leg of the trip: the others went over Tan Hill, home to the highest pub in England, while I chose the Cumbria Cycleway and an easier climb via Kirkby Stephen.

At one point, on a road decorated with coloured bikes, it felt like I was back at the Semaine Federale, France’s big cycle touring festival. The Tour of Britain had been through the day before, so the locals had dressed up their town.

The roads were also at their best. I was treated to pristine, newly-laid tarmac all through Swaledale. It had been laid for pro cyclists riding the World Championships there a couple of weeks later. Silky smooth cycling and great views around Thwaite and Reeth made this leg a very special day on the bike. The tailwind was so favourable that I caught the others by Richmond, and even had time for a spot of tourism at the military museum.

One of us had a bag of flour, so we feasted on pancakes at Osmotherly, carboloading for the steep, sheep-dotted hills of the North York Moors. I love hills – but at a certain pace. I was left far behind until we regrouped at Helmsley. From there, quiet lanes took us to Malton, which has reinvented itself as ‘Yorkshire’s food capital’. Our coffee and cake in the converted, glass-paned market building was certainly good.

Having done a lot of climbing already that day, I wasn’t over the moon at the suggestion we cross the rolling Yorkshire Wolds. Yet the view from our final Wolds climb is one I will never forget, and the sinuous descent through small villages and into Beverley, which has a huge minster, made me wonder why it’s taken me 54 years to ride here.

Our long day finished in Hull, in the old town at a wonderful independent hostel housed in a former theatre.

Coasting to the finish

The East Coast was uncharted territory for me; I’m originally from Devon. But it was great. We crossed the huge Humber Bridge into Lincolnshire. The Lincolnshire Wolds came and went, and we found ourselves in the flatland of the Fens, surrounded by endless fields of leek and asparagus. We stopped briefly at the RAF Flight Museum at Coningsby to admire Spitfires and an enormous Lancaster Bomber.

There were many cycle routes throughout this trip, and a real belter took us into Boston alongside a river. Boston has the highest medieval tower in the UK, as well as a windmill, and a Premier Inn, which is where we stayed. The town has a diverse community, so it seemed only right that we eat at a Polish family restaurant. A schnitzel the size of a dinner plate, plus dumplings, filled us and our Tupperware.

Our next leg was less than 60 miles. This gave us time to visit Boston’s tower, where we paid a pound for a block of Lego to help build a model in aid of the tower’s renovation. So far 34,001 bricks have been bought, leaving 65,999 to go.

Our last day took us east towards Lowestoft and our goal. Although it was flat, we had 70 miles to cover and a train deadline of 15:30. For our final 20 miles, we were guided by Mike, a local cyclist. He dropped us off on the breakwater cyclepath, where we gathered at the plinth marking the UK mainland’s most easterly point.

Conditions: Tarmac all the way, apart from a couple of short paths. We had mostly sunny days but be prepared for any weather.

I’m glad I had: A spare tyre – used twice between bike shops. Tupperware for leftovers.

Next time I would: Take twice as long!

I’d recommend staying at Tobermory SYHA the night before starting. You can then take the early ferry to Kilchoan, ride the six miles each way to Ardnamurchan lighthouse, and catch the ferry back to Tobermory.

I managed to get to the start and back from the finish entirely by bicycle and public transport.

I cycled into Bath, caught a train to London, then took the superb Caledonian Sleeper to Fort William.

You can travel from Fort William to Oban by train but I cycled this – it’s 79km (49 miles) on Sustrans Route 78.

From Oban, I caught the ferry to Craignure, then cycled the remaining 34km (21 miles) to Tobermory. Returning from the finish was simpler: there are regular trains from Lowestoft.

The limiting factor for a group wasn’t so much transport but the availability of cheap accommodation in the appropriate places, particularly in the Dumfries area.

The End to End The ultimate ride across Britain, from Land’s End to John o’ Groats. Various route options and distances.

Wales End to End See beautiful mountains and wildlife in this ride across Wales. Cardiff to Holyhead is 400km.

Sea to Sea The most popular 225km C2C route is Whitehaven to Newcastle across the Lake District and the Pennines.