Laurence taking to the Devon trails on his Jurassic Roller Coaster
By Anonymous
Thursday, 26 May 2016

Cycling journalist Laurence McJannet has embarked on an off-road adventure to bike and wild camp his way along 30 of Britain’s most beautiful off-road trails and ancient trackways. In this exclusive extract from his book 'Bikepacking' he shares a roller coaster of a route along the Jurassic Coast in Devon, close to his family home in Sidmouth where his children first saw the Tour of Great Britain.

Perhaps one of the most defining aspects of our small island is its coastline. Given that we are never further than 115km from the sea in Britain, it's easy to see why so many of us are drawn to it. Our island's 17,000-plus kilometres of coastline offers infinite variety, and bikepacking off-road gives you the opportunity to discover its richness and beauty in a way like no other.

Perhaps this is why, when looking to explore south Devon by bike, I almost subconsciously turned my wheels towards the Jurassic Coast and Sidmouth. I have ridden the Wessex Ridgeway before, which winds its way from Tollard Royal in Dorset to the handsome seaside town and World Heritage Site, Lyme Regis. But for a point-to-point ride it can be tricky, as both end points are far removed from rail connections.

I sketched out a loop that reached close to Honiton – once famous for its pottery and lace production, and now which now boasts London and Exeter rail connections – and swept down to the promenade in Sidmouth, its cycling heritage bolstered of late by the visit of the Tour of Britain, which has rolled out twice along its wide coastal road in recent years. Although the A-road that would take me from Honiton to the northernmost point of the ride can be fairly busy with midday traffic, it's just a half dozen kilometres, mostly labouring uphill, until I would reach the exposed crossroads at Putts Corner and the beginnings of a coastal micro-adventure. 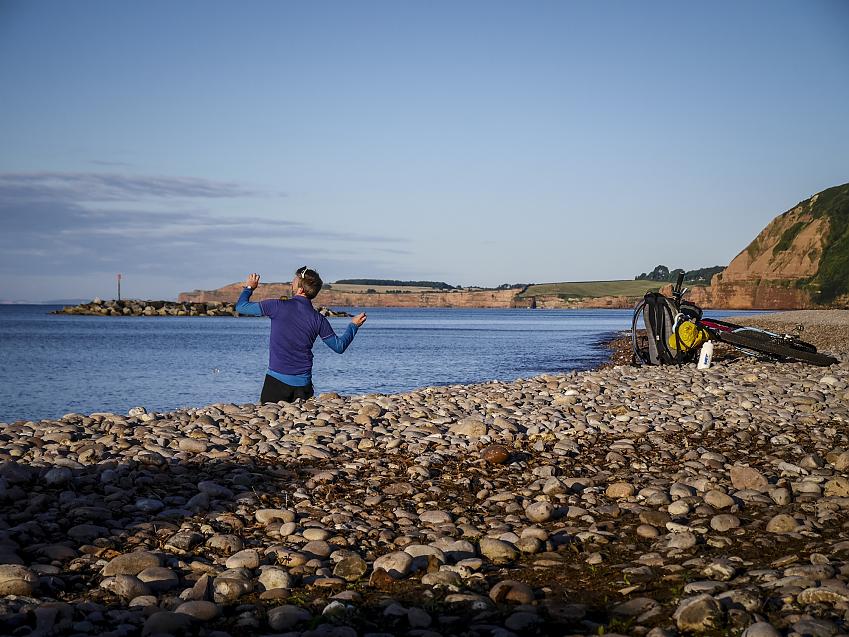 Sending pebbles back from whence they came in Sidmouth

The Hare and Hounds, a large and lovely traditional pub in Sidbury, is steeped in folklore. In the 17th century it was a popular haunt for poachers and smugglers, while legend says the large stone outside dances at night when it hears the bells of Sidbury Church and rolls down the valley to drink at the River Sid. I was pleased to see it was looking suitably stationary as I rolled up on my bike. It was a little too early in the day to sample one of nearby Ottery St Mary's fine ales (I'm sure many a local has seen the stone move after one too many of these potent brews!), so I continued on, eager to explore this part of east Devon's Area of Outstanding Natural Beauty.

It is easy to see why this glorious landscape has been given this designation, and riding through Farway Castle – not a castle at all but the site of a Bronze Age barrow cemetery – the grassy depressions were wispy with mist, and the rolling hills of conifers hushed and still. The dry, dusty bridleway guided me past an old airfield and up to the ridgeline of Harcombe Hill, from where I caught glimpses of the settlements to which the River Sid has imparted its name: thatched roofs giving the village of Sidbury a rattan-like texture from here; the busy junction at Sidford beyond that; the now gleaming white-washed walls of Sidmouth further still.

Dropping down from Harcombe Hill, and still blessed with a continuous chain of bridleways, the sea glimmered beyond the canvas colony of Salcombe Regis' campsite. A short leg along the main road took me into quiet lanes that form part of the cycleway down to the coast. All signs of traffic disappeared as the lanes lead me into the Byes, a beautiful green corridor flanked by meadows and the treelined outskirts of the town that follows the course of the River Sid from Sidford to the sea. Only the final stretch from the old Toll House took me back onto the road, splashing through the ford that surprisingly came up to my wheel hubs, before riding past a huge marquee erected for the town's renowned annual folk festival and down to the RNLI lifeboat launch.

As soon as I left the Byes behind I could smell the sea air and all my senses were stimulated as the promenade opened up before me. My ears rang with the noise of gulls, the rhythmic wax and wane of the waves over the pebbles, the throng of holidaymakers and locals alike. I headed down past the upturned rowing boats to a more secluded spot, favoured more by the odd dog-walker than hordes of day-trippers, kicked off my shoes and waded in, instantly vivified by the chill, choppy water. I looked back at my abandoned bike on the stony shore, remembering how only last year over in neighbouring Seaton violent storms had ripped the pebbles clean off the beach, leaving nothing but barren sandy stretches and battered beach huts – only to return the pebbles to their rightful place over the following weeks.

The sun was starting to hang heavy over Sidmouth͛s striking sandstone cliffs, so I dried off for a while on the shore before locking my bike up and exploring the town by foot. At the end of my sojourn, as the promenade began to empty and families retreated into their seafront hotels, I noticed a shallow-looking bay protected by a crescent of red cliff. On the top of one perched a café, closed at that hour, surrounded by formal gardens.

I was awake before dawn and sat contentedly staring out to sea, thinking how rarely we routine-ruled creatures get to see the sun rise, particularly over a scene such as the one that greeted me." 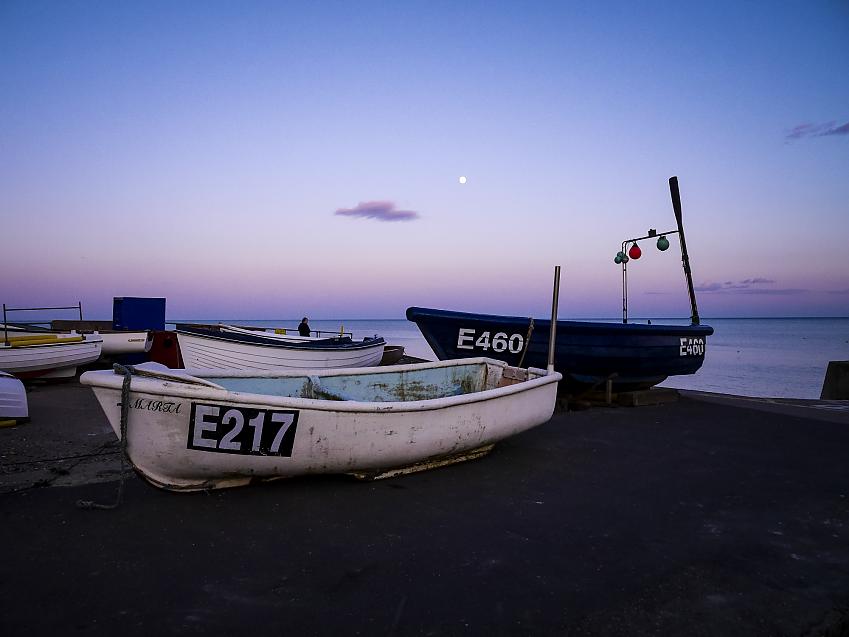 Bivvying down on the beach has its perks...

With my morning coffee guaranteed I retrieved my bike and made my way across the pebbles, past what I later discovered to be a rocky outcrop called Chit Rocks, to my bed for the night on Tortoiseshell Rocks. I found a spot well back from the high tide mark, but far enough away from the soft sandstone cliff defaced by decades of gouged graffiti to give me a worry-free night's sleep – the eroding cliff face along the Jurassic Coast, all the way from Orcombe Point near Exmouth to Old Harry's Rocks near Swanage in Dorset, has been responsible not only for bringing down roads and houses but also for the deaths of a number of people climbing, rock pooling or relaxing in their shadow.

Fashioning a makeshift windbreak from my tarp and bike frame I set up camp, making a small driftwood fire in a sheltered pebble basin, needing nothing more than a stove-cooked packet soup and a few nips of whisky from my hipflask to help me settle down for the night. I was far enough away from the town for its nocturnal activities not to disturb me, and let the soporific murmuring of the sea and a serene star-filled sky send me to sleep.

I was awake before dawn and sat contentedly staring out to sea, thinking how rarely we routine-ruled creatures get to see the sun rise, particularly over a scene such as the one that greeted me. As the first rays of sun glinted off the morning's mirror-calm sea, my desire for caffeine gradually over-rode that for daydreaming, and I gathered my things and made for the café on the cliff. It was a good choice for an early morning mocha, as it's on the NCN's route 2, which runs from Dover to St Austell, but for me would serve just as the southern-most tip of my ride. 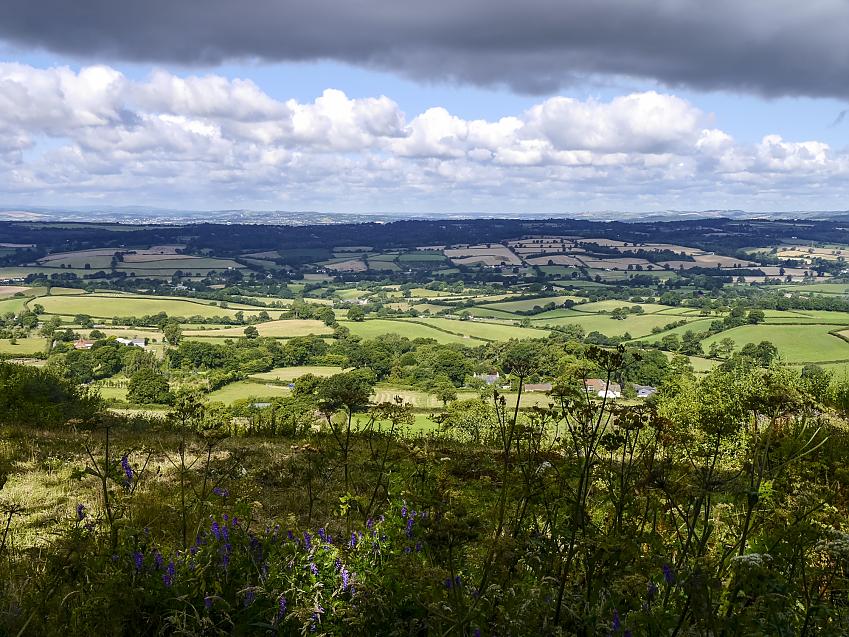 One of the many spectacular views along this ride

Given that it runs up to Peak Hill I shouldn't have been surprised at the alarming gradient I had to cope with almost immediately. The reward for my exertions lay in the dappled sunlit corridors of Mutter's Moor and Bulverton Hill. I'm always sceptical when off-road routes pass through golf courses, but the fairways up here were among the most scenic I have ever encountered, snaking down through valley and vale toward the sea. In fact I began to miss their expansive vistas when I happened upon a dense, overgrown bridleway at Bulverton that was barely wider than my handlebars in places and left me nursing a collection of scratches and stings on every limb.

The old railway line through Harpford wood promised to be more spacious, however, and I was surprised to learn it is another NCN route (no.248), given how much it feels that nature is reclaiming the trail here. There's a deep, partially obscured gulley on one side and the surface is a mixture of mud and mulch, though of course, given its heritage, it is flat and uncomplicated. Before it reached the village of Tipton St John I peeled off and headed up a paved track which climbed steadily to the base of Beacon Hill, where a bridleway pointed me diagonally back over fields to a quiet country road leading into Ottery St Mary.

This small Devon town is the birthplace of the Romantic poet Samuel Taylor Coleridge, and is home to a unique flaming tar barrel procession which has become the centrepiece of the town's November carnival. It is believed the tradition stems from the lighting of barrels of pitch to warn of the invading Armada. I was a few months early for this incendiary experience, and unfortunately too late for Ottery's enchantingly titled Pixie Day in June, where children dress up and re-enact ancient folklore.

As I climbed out on bridleways and lanes up Westgate Hill towards Bellview Plantation, I could see the church of St Mary, a scaled-down version of Exeter Cathedral, standing squat in the heart of Ottery. I found myself pondering over the many tales I'd heard – of pirates and pixies, witches and smugglers – and wondered why this place is so alive with folk tradition. The 'Witches Stone', otherwise known as the 'Rolling Stone of Gittisham Common', loomed large before me as I wound up back at Putts Corner and the Hare and Hound. My only decision before heading back down Gittisham Hill to Honiton was whether to sample ales of the Otter or Branscombe breweries before I left. Better try both, I decided, leaning my bike against the Witches Stone. 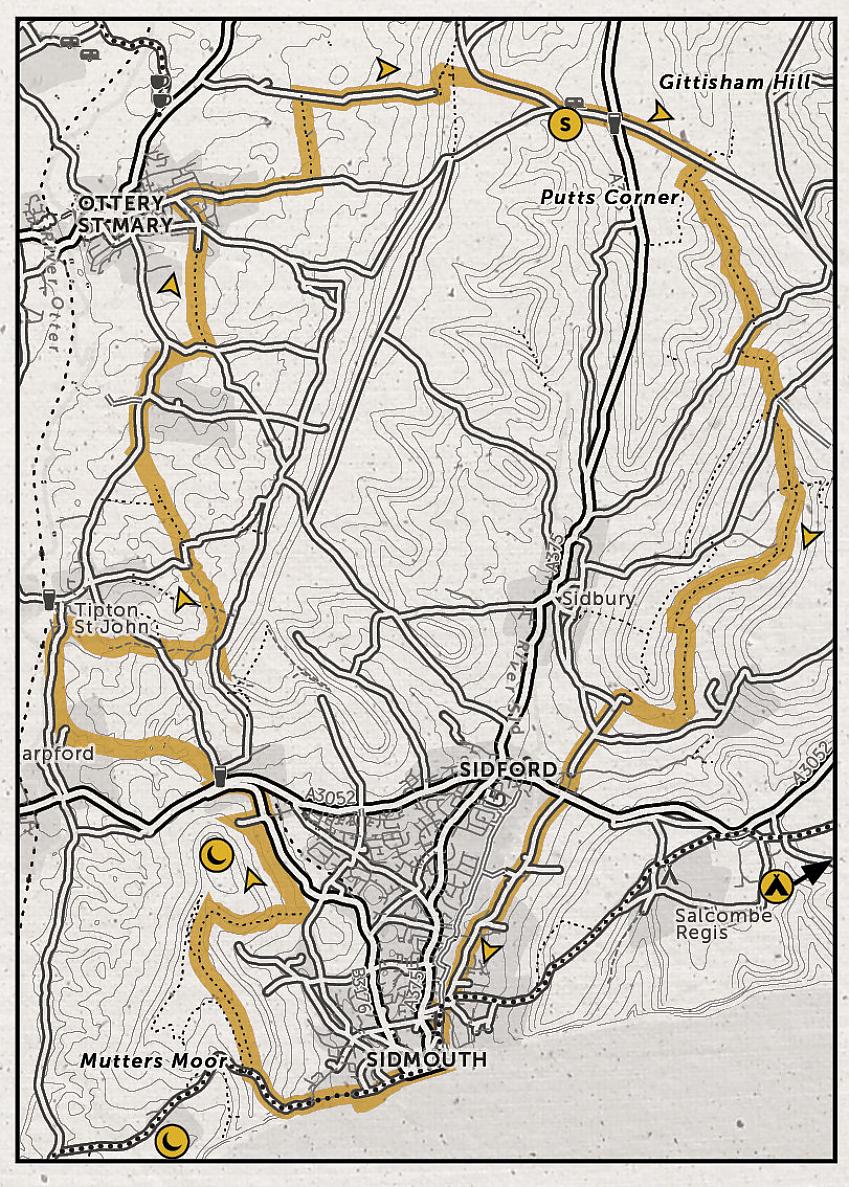 All words and pictures are copyright Laurence McJannet

​"Bikepacking: Mountain Bike Camping Adventures on the Wild Trails of Britain" by Laurence McJannet (£16.99, Wild Things Publishing) and at all good books shops.

For 30% off and free P+P visit www.wildthingspublishing.com and enter the code "CUK" at the checkout.