The pandemic may be a stick in the spokes for foreign cycling plans, but there are plenty of great rides in the UK. Dominic Bliss offers suggestions in Wales

With its lockdowns and travel restrictions, 2020 will long be remembered as the year of the staycation. And who knows? Perhaps 2021 will follow suit? While we may not be allowed to ride our bikes abroad where we’d like next year, there are benefits to staying in Wales.

Granted, the weather doesn’t always play ball, but you can’t deny that our countryside offers some astoundingly beautiful biking opportunities, whether you choose to stay on the road or venture off it. There’s the added bonus that, by travelling in Wales, you’re cutting down enormously on your carbon footprint and saving yourself money in the process.

Of course, domestic travel restrictions are as tough to predict as international ones. Next year we may still be cycling in groups of six. Whatever the rules, there are countless routes for roadies, touring cyclists, gravel bikers and mountain bikers to enjoy, whatever their level of expertise and fitness. Here are some suggestions for all types of trails in Wales.

Wales boasts some of the UK’s finest mountain bike centres and – when you reach the middle of the principality – some gloriously traffic-free roads. Mid-Wales is also home to this cycle and walking path alongside the Mawddach Estuary. It once featured in the Julia Bradbury BBC TV series Railway Walks.

The well-surfaced track follows the final section of a former railway line that originally linked Barmouth with Ruabon, in North Wales, and the West Midlands beyond. Between 1869 and 1965 it brought holidaymakers to the coast. But as part of the Beeching cuts in the 1960s, it was deemed surplus to requirements. The railway’s loss was the cyclist’s gain. 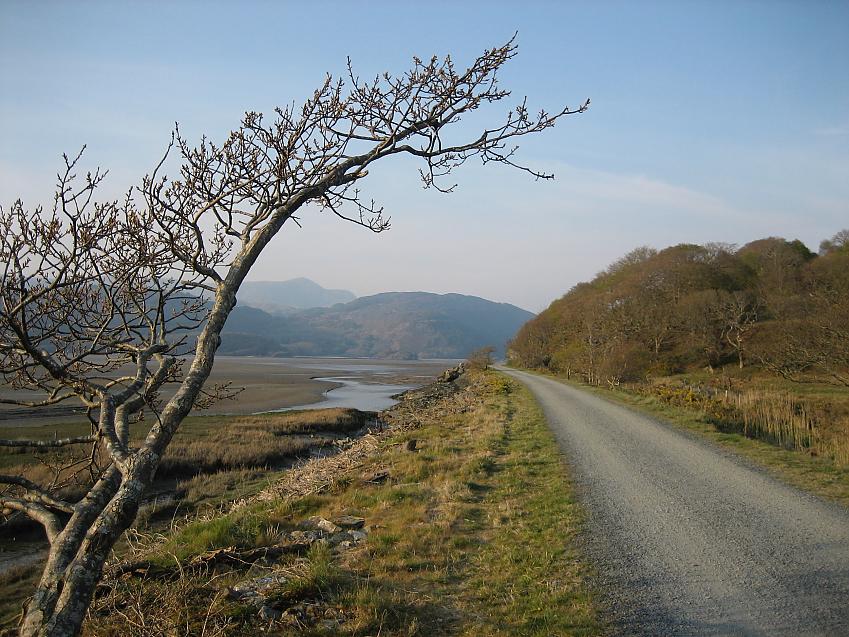 Mountain backdrop to a flat route

Suitable even for beginners, it starts in the market town of Dolgellau, in the car park next to the bridge, and gently winds along the southern edge of the estuary, mostly flat and clearly marked the entire way. But thanks to the amazing views south towards Cadair Idris, you’ll at least get a psychological sense of the steep ground surrounding you.

Eventually you approach the mouth of the estuary and turn right over Barmouth railway bridge. Here is the only section that beginners or youngsters might find tricky as the route follows the A496 into Barmouth town, but fortunately only for 300 metres.

The best rail trail in Wales?

“The Mawddach Trail is easily one of the most spectacular railway walks that Britain has to offer,” says the trail website. “There are stunning views across to Diffwys and the Rhinogs, and up the estuary to Y Garn and the Arans beyond Dolgellau. Pretty much the whole of the estuary is listed as a site of special scientific interest. There are two RSPB reserves (Taicynhaeaf and Arthog), and a whole host of historical sites to ponder over as you make your way through this beautiful landscape.”

Julia Bradbury describes the route well in the BBC episode of Railway Walks dedicated to the trail. She starts by heading west out of Dolgellau, following the river and the bypass towards the head of the Mawddach estuary. “From here the old railway makes its own path, across the reed bed and floodplains to meet the River Mawddach at Penmaenpool Bridge,” she says. “Now the river really begins to look like an estuary. The railway path hugs the south banks as it follows the corridor through the Welsh hills. Then there’s a long curve as trains once reached the bustling Barmouth Junction, the final landmark before the stunning approach to Barmouth itself. Barmouth Bridge may be man-made, but what finer way could there be to reach the Welsh west coast?”

Once you’ve reached this coast, perhaps you’ll have plenty of energy left to turn around and head the 9.5 miles back to Dolgellau.

Margam Park, near Port Talbot in South Wales, is the starting point for one of Wales’s best know sportives, the Dragon Ride. Since it’s an open-road sportive you can, of course, ride it at any time of year. The organisers offer four routes;
the longest, at 185 miles, is called the Dragon Devil which takes in several peaks above 500 metres in the Brecon Beacons. Total ascent? 4,396 metres.

This behemoth of a trail stretches 100-odd miles from Knighton, on the English border, all the way to Dovey Junction, near Wales’s west coast, taking in the remote hills and moorlands of mid-Wales, on country lanes, moorland tracks, and dirt trails.

Back in the saddle

Like other travel businesses, CTC Cycling Holidays had to cancel many trips in 2020 due to coronavirus. But our volunteer-led company has worked hard and is optimistic about holidays in 2021, with many more planned in the UK.

CTC Cycling Holidays is unique in being run by volunteers. They design and run cycling trips for everyone from beginners to adventurous travellers – in the UK, Europe, and worldwide. We’re looking to recruit more volunteers to help run our trips.

Your expenses are covered when leading rides. Please advise us on your ride or tour leading experience, but training is provided.

Weekender: Crossing the Dragon’s Back View

On my bike: Rob Penn View

Tales of the Trails: Q&A View

Cycling the lanes of the Vale of Glamorgan under threat View

How to improve transport cycling in Wales View