For young children on their own bikes, rail trails make great days out. Author of the Lost Lanes series of cycling books, Jack Thurston and family cycled the Taff Trail from Pontypridd to Cardiff

With children (aged eight and six) now big enough to ride their own bikes but not old enough to ride big hills or on busy roads, it can be tricky to find a route with that feeling of making a substantial journey while keeping them safe and sound. The 18-mile section of the Taff Trail between Pontypridd and Cardiff seemed like an obvious choice.

Our day ride began at Lido Ponty, the National Lido of Wales. Reopened in 2015, it has a unusual blend of 1920s’ Arts and Crafts and 1930s’ Art Deco stylings, painstakingly restored from dereliction. We set out of the town on a fine cycleway beside the river, then joined an old railway line.

The coal, iron, and steel industries that once defined the South Wales Valleys have left the area a legacy of disused railways, viaducts and tunnels, many of which have been converted to greenways for traffic-free cycling and walking. These make for good utility routes, and are great for children and new cyclists to gain confidence. As touring routes they can be a little repetitive, and you’re often hidden away from the wider landscape in a tunnel of trees. 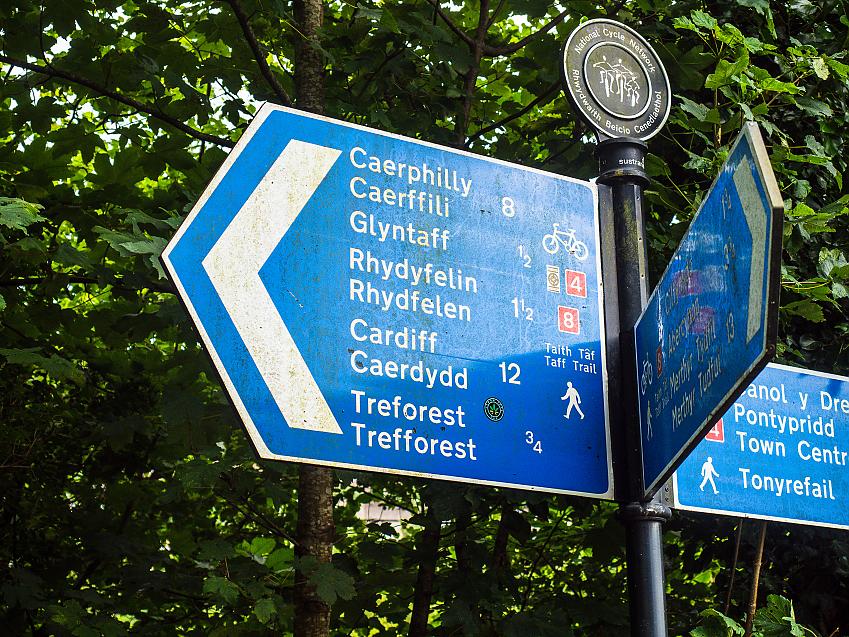 Our railway path came to an end at Taff’s Well. From here to Tongwynlais was the only part of the ride where road danger was an issue. The route uses some narrow shared-use footpaths beside busy dual carriageways, and a tricky crossing of a fast slip road from the A470 dual carriageway. The alternative is an unsurfaced two-mile cycleway between Nantgarw and Castell Coch, the fairytale castle built by the Earl of Bute, whose family made a fortune from coal mining and who played a central role in the development of Cardiff. For mountain bikers this is a better option but I thought the children might struggle on it.

Through Tongwynlais, we were required to ride for 500m or so on the A4054, a fairly busy road that is narrowed by parked cars. For the rest of the ride we were back on traffic-free paths or very low traffic roads, but this short section is a reminder that a route is only as good as its weakest link.

We entered Cardiff’s suburban outskirts along the string of nature reserves and parkland that fringe the river. We spotted heron, red kites and sparrowhawks, and passed several well-used wild swimming spots. At Radyr we stopped to see the two 10m long Archimedes screw turbines, which can generate 400kW of clean, green electricity from the power of the river. A little further on is the Melingriffith water pump, built around 1795 to supply water to a nearby canal. Restored to working order, it is one of just seven such devices in the world. 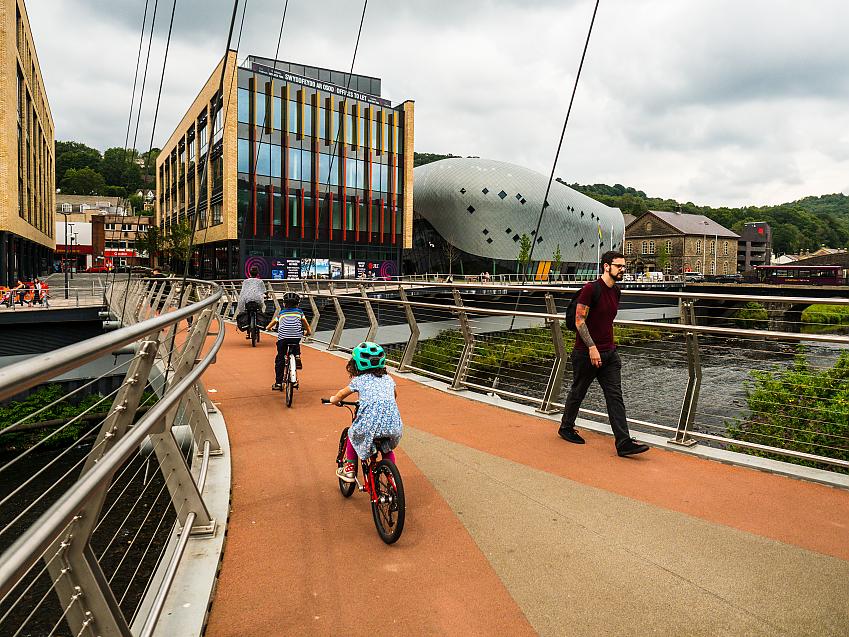 From Llandaff onwards there were many more people on the Trail, including lots of other families with young children – a sure sign of a successful traffic-free route. In Pontcanna Fields we saw side-by-side tandem quadricycles from Pedal Power, the Cardiff charity which maintains a fleet of specially adapted trikes and bikes for children and adults with disabilities.

One really good aspect of this section of the Trail was the absence of the kind of barriers installed by over-zealous local authorities to keep motor scooters from using paths reserved for walkers and cyclists. While a nuisance for people on standard bikes, these barriers are a disaster for those with non-standard cycles such as tricycles, tandems, handcycles, recumbents and cargo bikes, as well as users of wheelchairs and mobility scooters. The removal of barriers along our route has been a boon for people like Cardiff resident Julian Pitt and his disabled son, who ride a Hase Pino, a semi-recumbent tandem.

“The Pino has wide bars, a wide stand, and is longer than a regular bike,” he told me. “It’s also heavy, so can’t easily be lifted over obstacles. So restrictions at top or bottom are hard, as are kissing gate type arrangements. It’s a big improvement on a few years ago, though there are still some barriers around Cardiff, such as on the Ely Trail.” 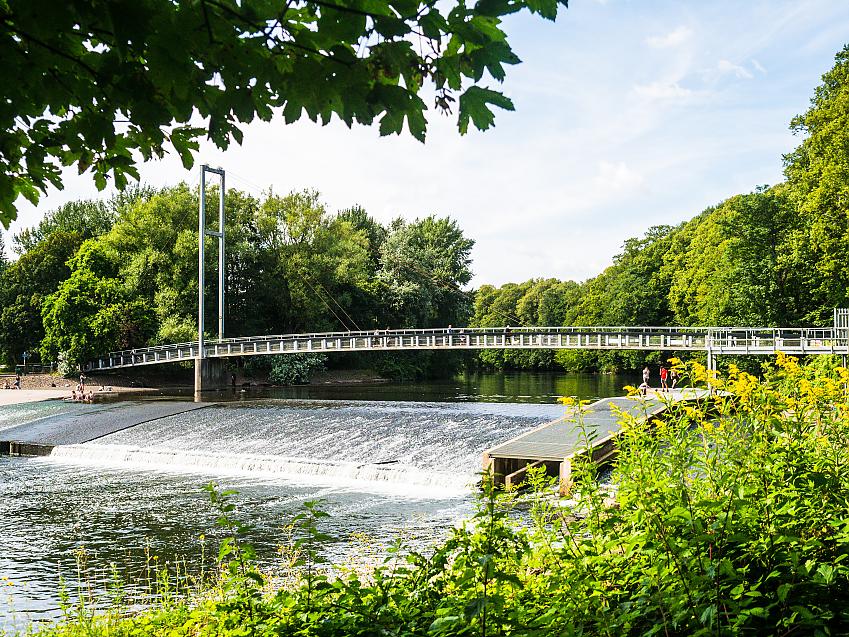 In a few places it felt like the Taff Trail had become a victim of its own success: it was so congested with pedestrians and other cyclists that we had to get off and walk. Cardiff City Council has proposed improvements, including widening the path through Hailey Park and upgrading the Blackweir Bridge.

Gwenda Owen, a longtime Cardiff cyclist and Cycling UK’s engagement officer for Wales, welcomes these improvements but notes: “There has always been the problem of how to get around the rest of the city and, for those who don’t live near the Trail, how to reach it. Cardiff Council are now showing the level of ambition that has the potential to get many more people on bikes and to enable families not to have to drive their bikes to cycle somewhere they feel safe.”

The Welsh Government has increased its annual spending on cycling and walking from £5m five years ago to £75m this year. The results are patchy but in places like Cardiff, where there is a council that is prepared to think big, a transformation is underway. I was intrigued to ride along Grangetown’s experimental ‘bicycle street’, one part of an innovative drainage and public realm scheme that uses attractive kerbside ‘rain gardens’ to reduce the volume of stormwater entering the sewers.

For the last few miles we followed the Cardiff Bay Trail, a 4.5-mile circular cycling and walking route that took us past the iconic red brick Pierhead Building and the sleek, glass-fronted building that houses Senedd Cymru (the Welsh Parliament). Our journey ended at the Cardiff Bay Barrage with a view out to sea and a real sense of achievement for the children at having ridden all day, and seen so much along the way. 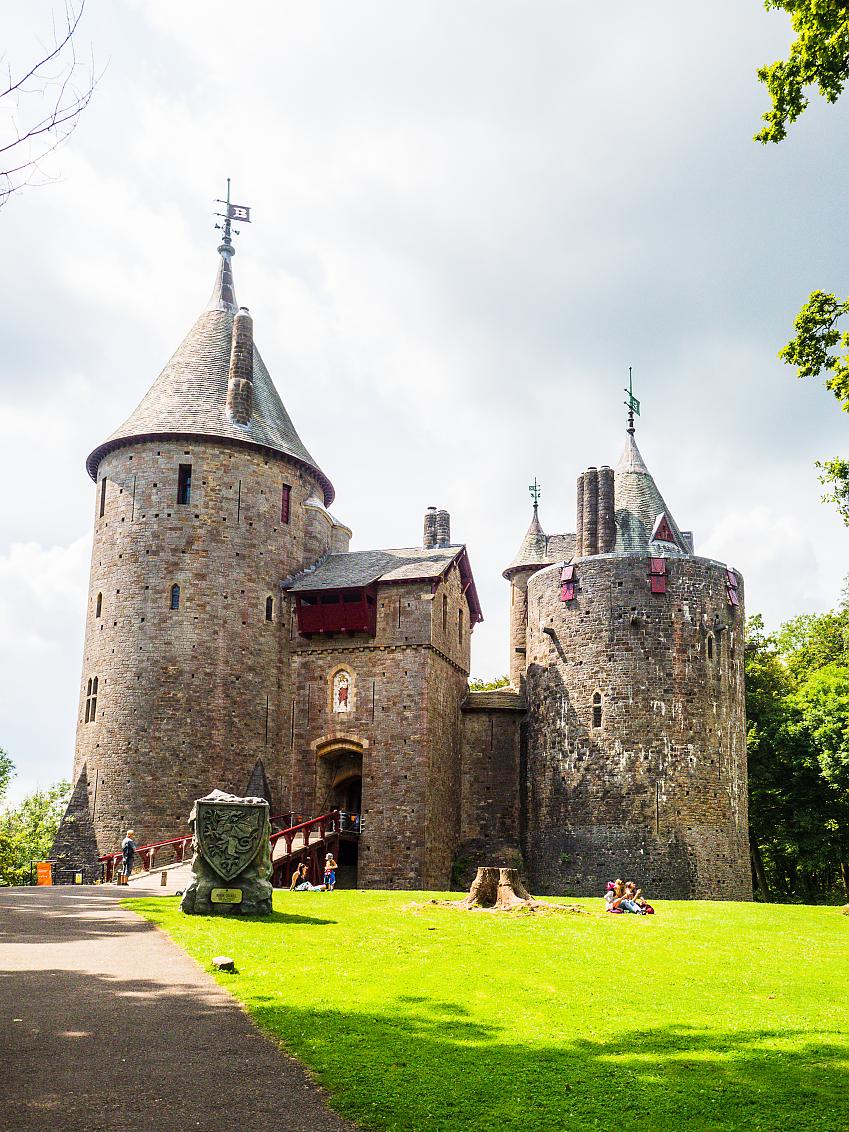 Do it yourself: Riding north

North of Pontypridd the Taff Trail continues to Merthyr Tydfil and up into the Brecon Beacons. Beyond Merthyr the scenery gets wilder and there are both tarmac and gravel options. For a route of around 65 miles, with direct train return to Cardiff, continue to Talybont-on-Usk and take Sustrans’s waymarked and mostly traffic-free ‘Across the Beacons’ route east to Abergavenny. Alternatively, from Merthyr Tydfil take the Heads of the Valleys cycle route (NCR 46) to Abergavenny via the dramatic Clydach Gorge.

Maps/guides: cycle. travel website to generate a GPS track for navigation, but signage was good all the way.

I’m glad I had…plenty of snacks for the kids.

Next time I would…stay over in Cardiff for some more sightseeing and to ride the Cardiff Bay Trail in full.