Last April, David Cope and his friend Colin took a train-assisted ride through the Welsh valleys

For much of the last year, Colin and I have trundled around familiar routes through the Vale of Glamorgan, starting and finishing at our homes in Llantwit Major. It’s got us out and about but had become a little monotonous. So last Good Friday, with the weather sunny and breezy, we decided to venture further afield and try some of the National Cycle Network routes that South Wales has to offer.

We loaded our bikes onto the early train to Bridgend. Our route was the Ogmore Valley Trail, NCN Route 883, a former railway that transported the coal mined in Nantymoel down the valley to Porthcawl on the coast. The gently rising track passes through Ogmore Vale and Wyndham, once thriving mining communities, before finishing in Nantymoel at the top of the valley.

The climb from there up to Bwlch-y-Clawdd (450m) was achieved with much more of an effort from Colin on his hybrid than from me on my e-bike. At the summit we were greeted by a gusting icy wind, spectacular views down to Treorchy, and the welcome sight of a refreshment van in the lay-by! 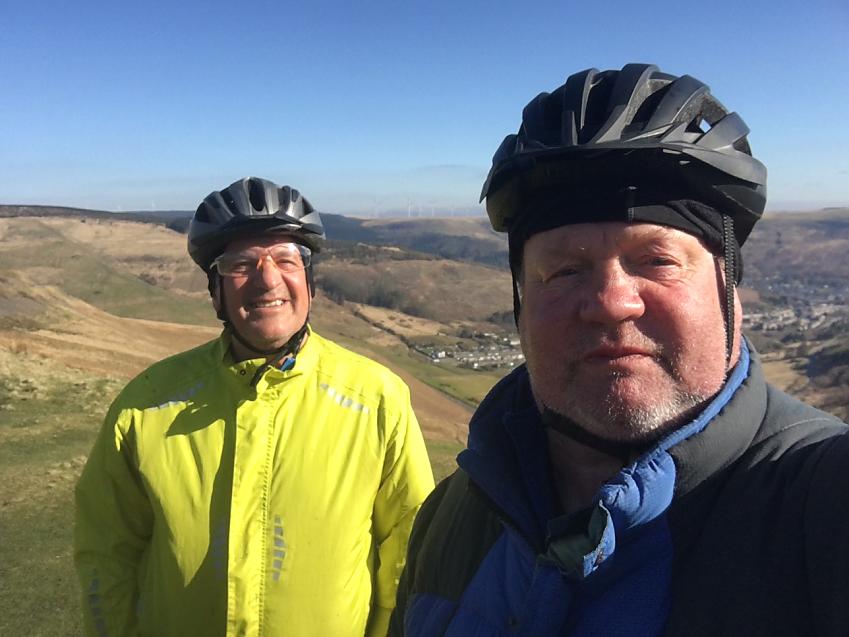 Cold spring sunshine at the top of Bwlch-y-Clawdd

Refuelled with tea and Welsh cake, we continued along the A4107 towards Port Talbot and down into the Afan Valley. This descent must be one of the best rides in Wales: fast and smooth, with Alpine-like turns.

We joined NCN 887, the Afan Valley Route, at Cymmer. We glided along the well-maintained cycle track, freewheeling down through woodlands and the former mining communities of Pontryhdyfen (birthplace of Richard Burton) and Cwmafan.

In bustling Port Talbot we searched for NCN 4, which would take us back to Bridgend via Margam. After an unintended detour to Aberavon beach, we found our bearings and headed east past the imposing structures of the steelworks. We completed our journey back to Llantwit Major on a route we had come to know and love during lockdown: NCN 88.