Neil has been volunteering at Give it a Spin Live!@New Scene in Cheshire for many years and feels that helping at the centre has boosted his confidence and helped keep him physically active.
After losing his mum in 1988, and following a few incidents whilst cycling on the road, Neil started to lose confidence and had some difficulty in social situations. Then a support worker, who knew Neil liked cycling, suggested that he attend the inclusive cycling sessions at Give it a Spin Live!@New Scene.
At first he didn’t think it was for him but now he loves helping the riders and getting them on the bikes. He’s always thought that the centre is a peaceful and safe environment where you can keep an eye on what the riders are doing.
Neil explains, “[my support worker] knew I was interested in cycling and being safe and knowledgeable about cycling in the correct manner.”
Neil loves being part of the scheme and feels he can come along to the centre and ride the bikes in safety to rebuild his cycling confidence, while getting some exercise and remaining physically active. Since he started volunteering, he has lost over two stone in weight!
Steve - the previous coordinator of Give it a Spin Live!@New Scene - and the team at Cycling Projects encouraged Neil to take part in lots of training courses, which he has completed enthusiastically. As his passion is the safety of the participants, his training has included a cycle maintenance course so that he can make sure that all the cycles are fit for use.

It is fantastic working with people that have learning disabilities and different abilities. It boosts my morale, it really does.

Neil, volunteer at Give it a Spin Live!@New Scene

After all his hard work at the centre, Cycling Projects gave him an award, which was presented by the Mayor, for volunteering over 100 hours.
Neil says, “It is fantastic working with people that have learning disabilities and different abilities, and working with the carers, as well as keeping in contact with bosses and volunteers.”
Neil comes to the cycling sessions every week no matter the weather. He feels that both he and the riders get real enjoyment and benefit from the cycling centre, not just increased physical activity. He says, “It boosts my morale, it really does.” 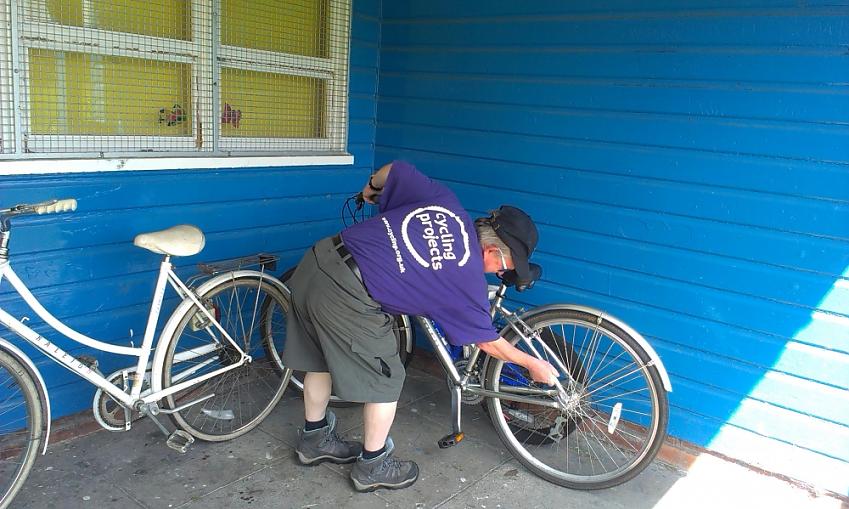 Above: Neil checks the adapted bikes before the session starts
Talking about the riders who attend the cycling sessions, Neil says, “They’re having a good laugh, I can see it in their faces. They give me a cuddle and shake hands. The people enjoy themselves – if they’re not happy I’d be surprised. If [the centre] wasn’t here it would be devastating for the people cycling. I would be very sad and so would the others. It is about cycling and seeing other people - they feel that I am a kind and genuine person to be with and I feel that I can help. The people don’t just cycle, some leave and some go off for walks - they also enjoy chatting. It’s great that it allows them to let off steam.”
Neil not only volunteers at the sessions but he is also an active member of the Friends of Give it a Spin Live!@New Scene, which includes helping out with fundraising and other development activity.
Give it a Spin Live!@New Scene is one of over 40 Cycling UK-accredited clubs in the UK that are part of the National Inclusive Cycling Network - a partnership between Cycling UK and Cycling Projects, and is funded through the Big Lottery Fund.
Case study by Jayne Rodgers
Inclusive Cycling     inclusive cycling     Cycling UK in England     Local cycling projects     Inclusive Cycling Network
Sponsored Advert
Sponsored Advert
Sponsored Advert
Sponsored Advert
Sponsored Advert
Sponsored Advert
Cycling UK continues to support the UK to cycle
This remains true during this difficult period with the ongoing threat of coronavirus Covid-19
Read our latest advice on cycling
Join Cycling UK to help us change lives and communities through cycling
Membership gives you peace of mind insurance, discounts in cycle shops, rides & routes
Join now