What was your New Year’s resolution – get out on your bike more, snack less, spend more time with family?

Have you kept to your resolution so far?

Everyone knows that sticking to promises you make to yourself on New Year’s Day is hard, not because the ideas aren’t well intentioned but because change is difficult.

As creatures of habit, it’s a serious challenge to alter our daily activities and choices, even when we are really motivated.

It’s hard enough changing your own habits or lifestyle but imagine trying to change society’s.

Many people don’t grasp the need for change. Even when they do understand the seriousness of the situation, stubbornly don’t want to change.

As a society we are addicted to the car – in Scotland 50% of short journeys (between 1-2km) are taken by car and 66% of all car journeys are made alone.

As part of its strategy to tackle the climate emergency, the Scottish Government has now set out a plan to change our driving behaviour.

Transport Scotland has published a route map to achieve a 20 per cent reduction in car kilometres by 2030.

The target was a commitment in the Scottish Government’s Climate Change Plan update which was published in December 2020.

It was set because transport has been lagging far behind other sectors in cutting climate emissions – remaining virtually unchanged for the past 30 years.

In Glasgow last year, we joined with others to successfully call for COP26 to recognise the role cycling as a solution to cutting transport emissions rather than just focussing on electric car technology.

Our future must be one with fewer cars, not just newer electric cars on the road.

Sadly, over the years, councils have drifted into accepting roads and public spaces being designed for motor vehicles.

As a result, many of our neighbourhoods are dominated by cars rather than being attractive places for people to live, walk and cycle.

The majority of people given a free choice between riding a bike on roads that feel dangerous or jumping in the car, will go for the car. To change behaviour, policymakers need to make [this] option less attractive

The route map contains over 30 actions which Government hopes will create the change needed to meet its target.

It’s disappointing not to see any big new policies – all the interventions in the plan, as far as I am aware, are existing commitments.

There are plenty of great ‘carrots’ but it’s a shame not to see more ‘sticks’ in the document.

The phrase ‘carrot and stick’ is a metaphor for reward and punishment used to induce a desired behaviour, and comes from the image of a donkey being urged to move forward by using a carrot (reward) or a stick (punishment).

Governments don’t like to use sticks, especially in the transport sector where historically politicians haven’t wanted to take away people’s freedom to drive.

Given a free choice between a small, bruised, discoloured apple and a large slice of cake dripping with cream (replace with treat of your choice), most people would opt for the cake.

Similarly, the majority of people given a free choice between riding a bike on roads that feel dangerous or jumping in the car, will go for the car.

To change behaviour, policymakers need to make the cream cake option less attractive – for car use this means using policy levers to create effective sticks, such as to restrict where or when you can drive and park, make driving a more expensive or slower option, take road space away from cars and parking, or halt new road building.

The flip side is the need for juicier carrots to provide realistic and attractive alternatives to using the car. For example, better and faster public transport, more joined up and higher quality cycle lanes, or high-speed internet to make it easier to work from home.

Thankfully, the route map has an excellent list of actions to encourage cycling – these ‘carrots’ now need proper investment and political focus so they can grow and flourish.

Transport Scotland is clear that this is not a 'one size fits all' plan.

For example, there will be more onus on city dwellers to reduce their car use than people in rural locations where there are fewer alternatives.

However, everyone can play a part, even people who live and work in rural areas.

Cycling UK’s Shift project, funded by Transport Scotland, is helping people to make the switch away from cars to cycling for short everyday journeys.

In the small town of Strathaven in rural South Lanarkshire, Shift has provided funding to enable Climate Action Strathaven and three local shops to trial e-cargo bike deliveries and thereby reduce the number of business journeys by car or van around the town.

So far, the small businesses have reaped the rewards with a quicker, more practical, and more popular service than traditional car or van deliveries.

The project hopes to inspire other local shops and businesses to adopt the e-cargo bike delivery service and grow the fleet. 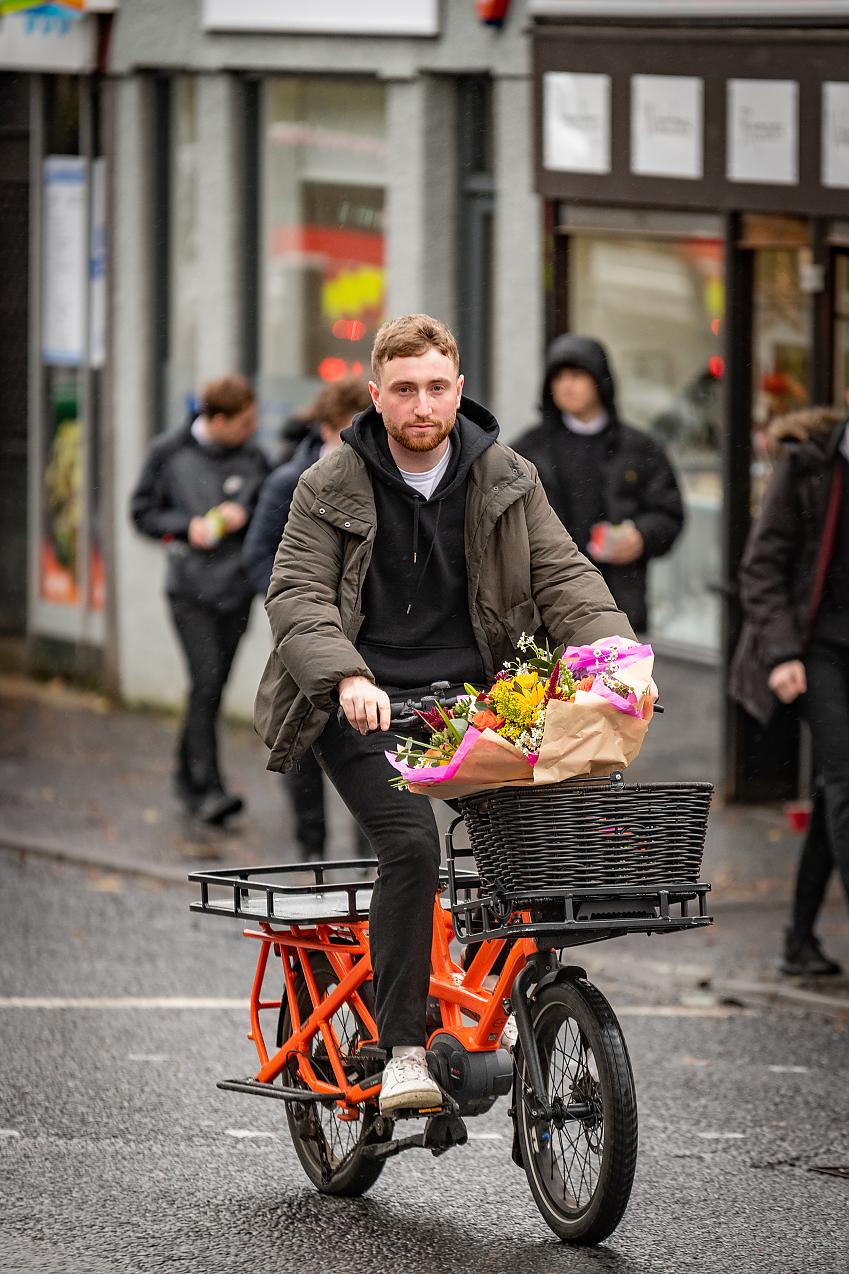 Have your say on road traffic reduction

You can provide your thoughts on the route map to the Transport Scotland through their consultation.

In addition to the arguments above, we shared more reaction and analysis in a detailed Twitter thread.

Over the coming months and years there will also be other opportunities to tell Government to keep investing in the carrots and to introduce more sticks.

Scotland is leading the way, but Wales is also looking at reducing road traffic in light of the climate emergency. The Welsh Government has called a halt to most new trunk road building schemes and none will go ahead until they have been assessed by the newly established Roads Review Panel.

The panel will look at whether they are in line with the Welsh Government’s Transport Strategy, which aims to deliver on its climate change commitments and safeguard future generations.

The Scottish Government has resolved (not a NY resolution!) to cut car traffic – it’s now time to use both carrots and sticks to wean society off its car addiction.

Has the Scottish Government delivered for cycling? View

How you can encourage more children to cycle View