As a new government formed south of the border, Nicola Sturgeon was outlining her new Programme for Government. Cycling UK campaigns and policy manager for Scotland Jim Densham looks at what the new set of priorities means for cycling and active travel

This week the Scottish Government published its Programme for Government (PfG) 2022-23 – the priorities for its work over the next year – and, understandably, this year it was heavily influenced by the cost of living crisis.

Last year’s PfG 2021-22 saw an unprecedented level of commitment towards cycling and we were, therefore, eager to see how government would follow that up this year.

We recently published a status report on last year’s PfG, assessing what progress government had made over the past year to meet its own commitments on cycling and sustainable travel.

Our assessment, one year on, was that positive progress has been made in a majority of areas, but work is still desperately needed in a few key areas.

In its new plan, the Scottish Government doesn’t go as far for cycling as it did last year, with no new standout promises.

After the big noise made for cycling last year this is the difficult second album for government: not able to live up to expectations.

Sadly, the PfG fails to inspire, instead taking a steady-as-you-go approach that largely reiterates some existing commitments, promising to get them done this year.

This doesn’t mean these commitments aren’t important or that last year’s big commitments have been ditched.

First Minister Nicola Sturgeon explains in her introductory piece that the PfG “builds on ambitious, long-term commitments made in the Bute House Agreement and restates our commitment to the importance of delivering on our ambitions for the climate” including “continuing our record investment in active travel”.

To make sure children and adults can cycle safely and lower their transport costs, Government must do everything in its power to fulfil all the commitments in its programme for this year and make good progress on the long-term priorities, too

There’s one concise bullet-pointed paragraph at the end of page 21 of the PfG focused on active travel, but it is chock full of policies.

‘Deliver record investment in active travel’ – we can expect another big boost to funding in the autumn Budget ahead of the promised £320m in 2024/25.

Ahead of the budget we will be calling for at least £235m to be spent on active travel in 2023/24, in order to put Scotland on a straight-line trajectory towards spending 10% of the transport budget on active travel (at least £320m) the following year.

‘Multi year funding’ – a welcome new addition which will help the long-term viability and delivery of projects which help people to ride a bike.

In our 2021 election manifesto we called for government to “produce an active travel network ‘blueprint’ for Scotland”.

It’s essential and urgent that national and local government sit down together and plan a network rather than the current piecemeal approach to getting shovels in the ground and creating our much-needed cycle lanes.

‘Access to bikes through schemes such as the Scotland Cycle Repair Scheme 2…’ – this scheme is run by Cycling UK and has a great record of working with local businesses to provide £50 worth of free bike repairs to those who need them most.

‘...and free bikes for school‑age children who are unable to afford one’ – a project at the pilot stage which is due to be rolled out nationally.

Disappointingly, the PfG makes no mention that Government would prioritise action on Active Freeways or Safe to School initiatives this year.

In our status report we gave a red ‘no progress’ rating against both of these policies, so no mention of either is very worrying.

Two further paragraphs in the PfG also commit to action in the next year which could enable people to cycle.

‘Roll out our national strategy for expanding 20 mph zones, with more roads and areas reducing their speed limits to 20 mph’ – a plan for delivering 20mph zones is urgently needed as Government has committed to “roll out 20 mph speed limits on appropriate roads in built‑up areas by 2025”.

‘Agree a New Deal between the Scottish Government and local government’ – the PfG outlines that among a number of issues, this work will support ‘tackling the climate emergency’, including delivering ‘active travel goals’.

This suggests a new approach to local and national government working together to deliver routes for cycling, walking and wheeling.

In our election manifestos of 2022 we called on local authorities to deliver the safe cycling infrastructure we need and to streamline processes to make this happen with the urgency needed to address the climate emergency. 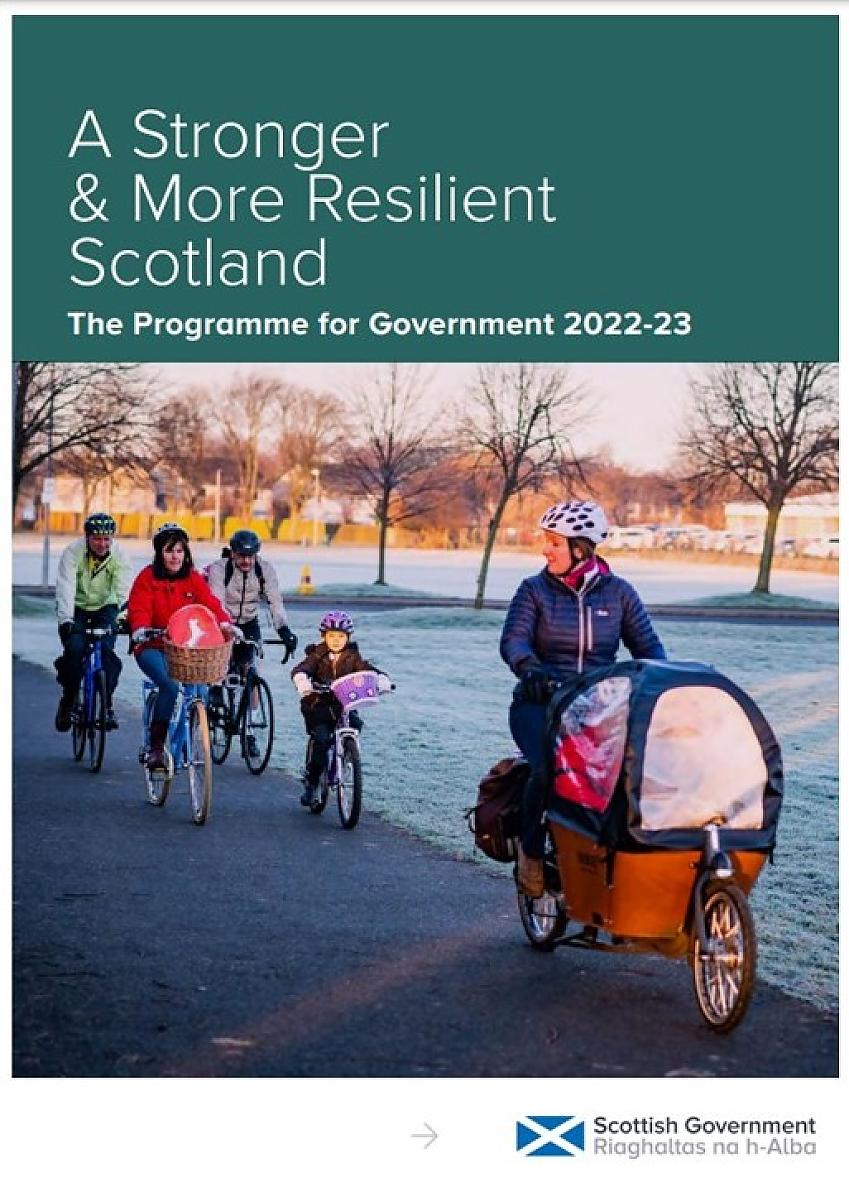 Front cover of the Programme for Government

As the First Minister stood up in the Scottish Parliament to make her speech, the PfG document appeared on the Government website and the most notable thing was that the cover featured a group of people on bikes.

A bit of detective work showed that the picture is of parents and children in the Corstorphine Bike Bus in Edinburgh.

Clearly, in any government document the words and their meaning are key, but cover pictures usually demonstrate a desired outcome.

Kids being able to cycle to school and ensuring the roads are safe for them to be independent, healthy and active must be a priority in Scotland.

Enabling people to ride a bike isn’t just about getting from A to B – it’s also about improving health and wellbeing, reducing transport poverty, supporting climate goals and so much more.

Getting on a bike instead of using the car can also help the people of Scotland cope with the cost of living – so a solution to the main theme of the PfG.

However, to make sure children and adults can cycle safely and lower their transport costs, Government must do everything in its power to fulfil all the commitments in its programme for this year and make good progress on the long-term priorities, too.

Has the Scottish Government delivered for cycling? View

What did Cycling UK's campaigns achieve in 2021? View