Why cycling can be especially beneficial for women

Female cyclists can enjoy so many benefits
By Julie Rand
Friday, 28 April 2017

Why cycling can be especially beneficial for women

Many articles, conferences and blogs discuss the barriers to more women cycling but very few stress the reasons WHY it is a particularly good activity for females.

The latest (2017) Physical Inactivity Report from the British Heart Foundation says: “the Government recommends that adults undertake at least 150 minutes of moderate intensity physical activity a week and strength activities on at least two days a week”.

It then goes on to say that, overall, women are 36% more likely to be classified physically inactive than men, equating to around 11.8 million women across the UK who are insufficiently active, compared with 8.3 million men. Public Health England statistics say that 26.8% of adult women were obese in 2015.

Cycling regularly would be a great way for those women to build some physical activity into their lives, thus improving their overall health and fitness. In the Netherlands, more women than men cycle, showing that cycling per se is an activity women can do when the conditions are right.

But apart from improving their fitness, as well as potentially reducing rates of cancer, heart disease and diabetes, what other health benefits can regular cycling bring to women in particular?

According to an article in Everyday Health: “By nature, women face a triple threat of risk factors when it comes to arthritis: biology, genetic predisposition, and hormones. Unfortunately, a lot of women have added a fourth risk factor to the mix - obesity." (More than three-quarters of women aged 45 and over are obese in England. Health Survey for England 2014).  The article goes on to say: "Overall, women have osteoarthritis, the most common form of arthritis, at much higher rates than men.”

Cycling could reduce the risk of osteoarthritis by helping to reduce weight - steady cycling can burn approximately 300 calories per hour - and it is also a non-load bearing activity, so many people can do it, regardless of age, infirmity or other conditions.

The body stops moving because you decide to stop moving. Everybody's system works better when they ride.

“Cycling is gentle on your joints and helps preserve cartilage. That's especially advantageous for women who suffer from muscle strain, foot problems, knee troubles, back pain or impact-related injuries caused by running, jogging or walking,” explains Dr Callahan, Medical Director of the Women's Sports Medical Center at the Hospital for Special Surgery in New York City.

Ninety-year-old Lan Yin Tsai takes part in a 160-mile bike ride every year, having been a cyclist for nearly 50 years. She says: “The body stops moving because you decide to stop moving. Everybody's system works better when they ride.”

Alleviates the symptoms of other common female conditions

Women obviously differ from men in having to cope with the physical and psychological symptoms caused by having menstrual periods and going through pregnancy, childbirth and the menopause. Many of the unpleasant side effects of these can be helped by regular non-load bearing exercise such as cycling, which can often be fitted into a daily routine.

But it’s not only physical health that cycling can improve. According to the Mental Health Foundation: “in England, women are more likely than men to have a common mental health problem and are almost twice as likely to be diagnosed with anxiety disorders".

Riding, whether on or off-road, may not be able on its own to cure these conditions, but it is a life-enhancing activity. Cycling provides the chance to literally expand one’s horizons, to feel the wind in one’s hair, to breathe fresh air and to experience ‘mindfulness’ by looking at an inspiring view, rather than a computer or phone screen version of ‘reality’. For younger women especially, who nowadays are under pressure to feel good about themselves because of their looks rather than through doing anything active such as cycling, riding a bike is an easily accessible activity that can reinforce a sense of self-worth and pride in using their bodies to achieve something, rather than simply as a channel for the admiration of others.

It also offers the opportunity to enjoy some quality ‘me time’, away from domestic duties (which are still done largely by women), and can help reduce stress, anxiety and depression as the adrenalin and endorphins that cycling generates provide a natural high, at least in the short-term.

Cycling can also be a social activity, which again is beneficial to women’s mental health. Hannah, an attendee at a Cycling UK-supported women’s cycling group in Manchester called Lady Pedal says: “As a result of participating, I have a supportive group of proactive female friends, something which I often lack in social circles.”

Rides of Way Cycling UK’s Off-Road Report 2017 found that 91% of the people who responded to a survey into off-road cycling said that it was very or fairly important for their mental health but 15% of women, as opposed to 12% of men, said the social side was their main motivation to go mountain biking, suggesting that more women value the chance to engage in social contact over the technical demands of the activity (14% of women, compared to 26% of men, cited the technical challenge as their main motivation).

However, those who DO enjoy the technical aspects of off-road riding report an improvement in other aspects of their lives as their self-esteem and confidence blossoms.

So I started to get fit and, as my fitness level grew, so did my confidence.

Personality Processes and Individual Differences, a study by Wiebke Bleidorn, PhD from the University of California, published in the Journal of Personality and Social Psychology in 2015, found that across all 48 nations surveyed, women consistently report having less confidence than men. Trying new challenges, whether it’s attempting a technical trail feature, a long-distance tour or even just riding a bike again after many years can be enormous confidence boosters for women of all ages.

Café worker Alicia, who had wanted to learn to cycle for 30 years, was taught to ride a bike when in her 50s in order to be able to keep up with her grandchildren. After not being allowed to ride as a child, she said, on mastering the skill: “I am very happy – you have changed my life!”

Cycling UK member Linda Edge, also a relative novice, went on a 10-mile ride with her local Cycling UK group before embarking on her lifetime dream of riding from Scotland to Italy. She said: “So I started to get fit and, as my fitness level grew, so did my confidence.”

Another Lady Pedal member noted that at a recent gathering where they sketched bicycles: “An interesting discussion about our favourite bodily sensation inspired a renewed love of cycling in a number of the group. Women enjoy the feeling of wind, rain and sunshine on their skin and in their hair. One woman echoed a consensus that feeling powerful, especially standing up and ‘absolutely going for it’ was a great sensation.

"The meditative rhythm of breathing and pedalling was noted, as was the sensation of being out of breath. One woman mentioned the lovely feeling of weightlessness you experience when on your bike. And everyone agreed it’s a great place to think! I personally love feeling the wind through the hairs on my legs! A great reason not to shave your pins if ever there was one! We all agreed that a child-like sense of abandonment and freedom was something very special about cycling (and drawing!).”

We all agreed that a child-like sense of abandonment and freedom was something very special about cycling.

New mountain biker Trudi Louise says: “A year ago today I started mountain biking. Since then I have overcome so many fears on the trails, taken the bike down some steep drops, got air on the bike and got fitter but most of all, the good friends that I have found that have made this whole experience even better. I have never looked back and riding has enriched my life with some pretty amazing times, helped me through some rough patches in my life, kept me sane, kept me going and made me stronger! I have even got a road bike, too!!” 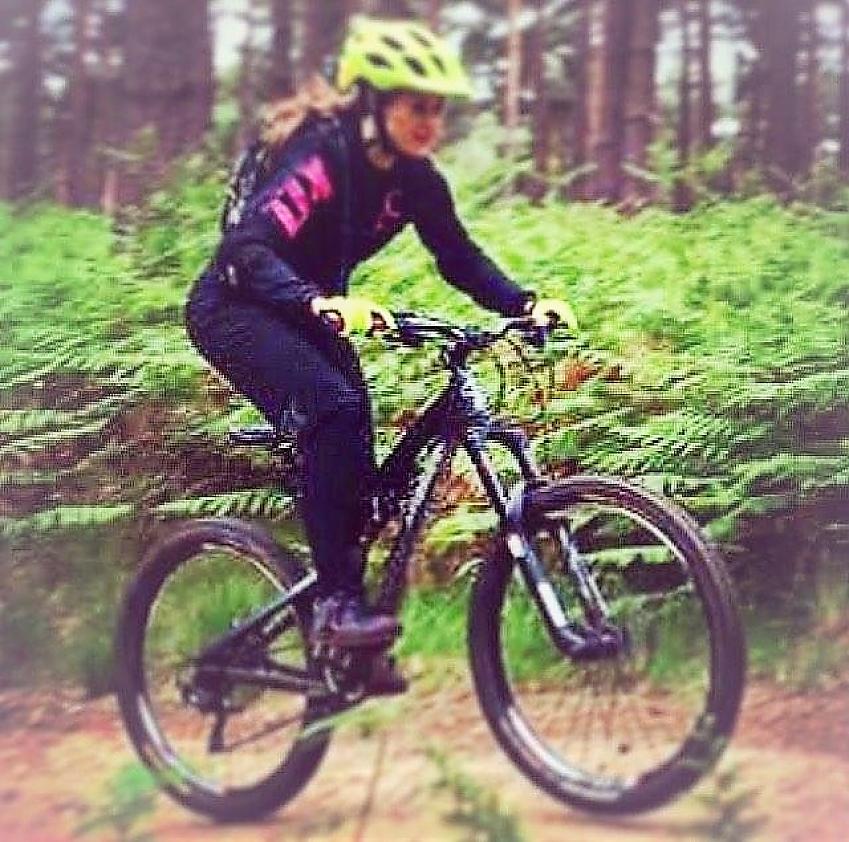 Above: Trudi Louise in action

I have never looked back and riding has enriched my life with some pretty amazing times, helped me through some rough patches in my life.

In addition to all the above benefits, cycling fits very well into busy family lives. As stated previously, women are often the care givers and make more short trips than men. In urban areas especially, cycling can enable these short trips to be made more quickly and easily by bike: it's often easier to move around congested town centres on two-wheels than four, and obviously there are fewer issues around parking and door-to-door access to destinations.

Benefits of riding a bike outweigh the risks

Sadly, for many women, the disproportionate barriers they face, as academic Alix Stredwick explained in an article commissioned by Cycling UK, to riding a bike mean they will never enjoy all the benefits it has to offer. Above all, concerns about safety mean that far fewer women cycle than men. But Cycling UK's briefing on Road Safety and Cycling says that: "The life years gained due to the health and fitness benefits of cycling in Britain outweigh the life-years lost through injuries by a factor of around 20:1."

Our current Space for Cycling campaign, as well as this summer's Women's Festival of Cycling and initiatives such as Belles on Bikes, aim to go some way to redress the gender imbalance in cycling by creating the conditions in which more women may feel able to take it up.

Has cycling improved your health? Let us know using the comment box below (you will need to log in).

Alix Stredwick View
Cycling UK continues to support the UK to cycle
This remains true during this difficult period with the ongoing threat of coronavirus Covid-19
Read our latest advice on cycling
Join Cycling UK to help us change lives and communities through cycling
Membership gives you peace of mind insurance, discounts in cycle shops, rides & routes
Join now