The Scotland Cycle Repair Scheme offers free bike repairs to people who can't otherwise afford it. Cycling UK's Jennifer Young spoke to some of the 250 bike shops taking part to get a snapshot of how the scheme is progressing

Since the Scotland Cycle Repair Scheme launched on 3 August 2020 there has been a huge response from people eager to get back on their bikes.

Steve Diamond of Diamond Cycles in Galashiels, Borders was pleased to note that most of the people signing up were those targeted by the scheme.

“I’ve been here for ten years and I’m seeing new customers with old bikes. They’re not existing cyclists, they are people with an old rusty bike in the shed who can start using it now thanks to the scheme.”

Steve outlined his reasons for taking part in the scheme: “I wanted to make sure the help went to the right people – and that’s people who wouldn’t normally come to me.”

The scheme, which is funded by the Scottish Government and delivered by Cycling UK, offers free repair and maintenance up to the value of £50.

Huge levels of interest meant that some bike shops ran out of funded places quickly, in Steve’s case on the morning the scheme opened. He said: “It just flew. We filled all 44 slots in the first three and a half hours.”

Once bike shops like Steve’s have spent the majority of their first allocation of funding, they can apply for a further grant to deliver more repairs to those who need them.

I’m seeing new customers with old bikes. They’re not existing cyclists, they are people with an old rusty bike in the shed who can start using it now thanks to the scheme

It was also a positive story a little further north in Kirkcaldy, Fife as reported by David Glover of Lang Toun Cycles, part of local charity Greener Kirkcaldy. He said:

“We’ve had a real mix of people come forward, some with bikes they are using already but who can’t afford to replace some worn out parts, and others who have an old bike sitting around unused.”

Most of the work required has been replacing cables, chains and brake pads, after blowing off the dust and cobwebs some of the older bikes have acquired over the years.

David said: “The scheme has been great for us as we are a brand new social enterprise bike workshop, so it’s really put us on peoples radars. And it’s great overall as the majority of the people coming to us wouldn’t be cycling without it.” 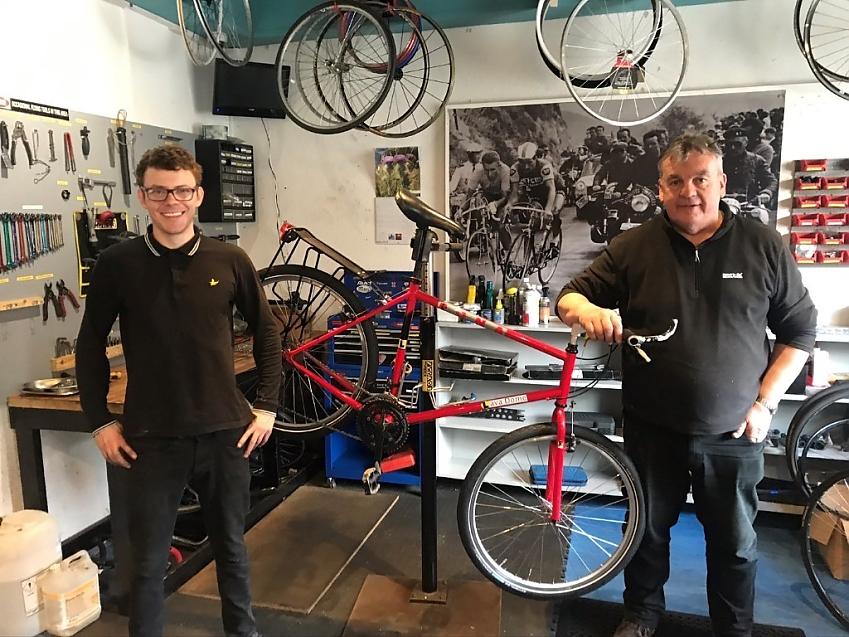 “We chat to all the customers and I would say that 70% of them wouldn’t have brought their bike to me without the scheme”.

Adam, whose shop has been operating for ten years, was also fully booked in a week and is now about halfway through servicing and repairing the bikes, most of which had been stored in a shed unused for years. Typically the bikes have perished inner tubes, bald tyres, seized chains and worn brake pads.

He appreciates the scheme for keeping things busy in his workshop and for helping a range of people to cycle: “It’s got a lot of people on bikes that wouldn’t have done so normally, and made it safer for some of those who were already cycling.”

Over on the west coast, Willie Cosh and his team at Q Bikes in Paisley, Renfrewshire have sped through the servicing and repair work to get 40 bikes back on the road in under a fortnight. Taking part in the scheme has topped a bumper year so far for the business, with an estimated 800 new customers coming through the doors since March.

He says that some of the bikes coming into the shop were in a poor state and could easily have found themselves on the scrapheap.

Luckily his team of three mechanics were able to get even these bikes back on the road thanks to their efforts and the scheme. He said: “Keeping bikes on the road is so much better than dumping them.”

Putting the 'big' in The Big Bike Revival View