There's no shortage of hi-tech gizmos on offer to track, plan or record your rides. Here's our pick (plus a bit of more old-school gadgetry) 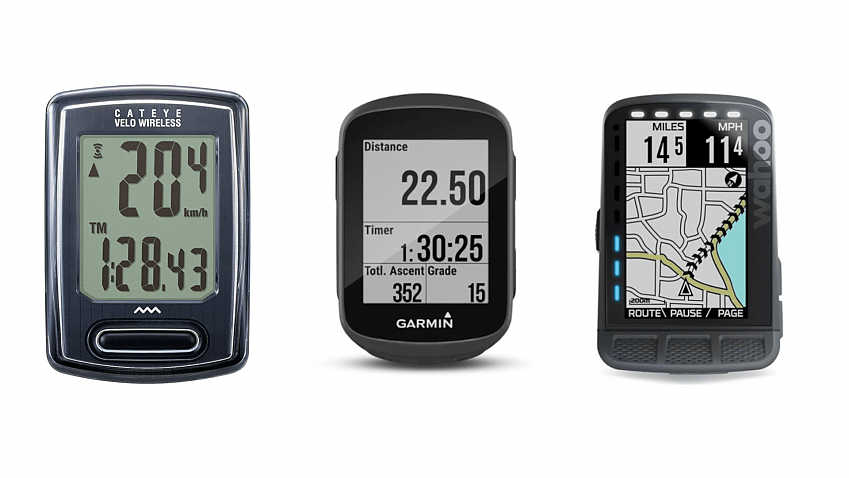 We all love to know how far and fast we've ridden, and you don't need to spend hundreds to keep tabs on the basic stats.

CatEye computers have been around for ages – I remember crashing my Raleigh Mustang as a kid because I was watching my fancy new speedometer instead of looking where I was going. This basic wireless model will tell you your current, average and maximum speed, as well as distance and time, using a sensor fitted to your fork. None of the fancy GPS bells and whistles, just clear and easy to read stats on your handlebars.

Adding GPS means quite a step up in price, but masses more data on your ride, including being able to target those all-important Strava segments. This device comes in at the lower end of Garmin’s range but scores highly on its crisp screen which is easy to read even in bright sunlight: it uses e-ink technology similar to a Kindle. There’s no base map, though, so although you can import and follow routes, all you will see is the line you have to follow, so best pack a map if you plan on taking detours.

The best part of £300 to spend on a bike computer is a whopping amount, so you’d hope it would be good, and it is – so long as you have a smartphone. Using the companion app, it’s very easy to set up from the start and to upload your favourite routes to follow. You can also upload routes direct from Strava, Komoot, RidewithGPS and more, with the mapping having no trouble either on or off-road. The connectivity is second to none, which is great when a planned ride goes awry and you need to make changes as you travel. It’s more than just a GPS guide though, it also has a whole bunch of features for those who like to record every aspect of their ride, not just the miles travelled. 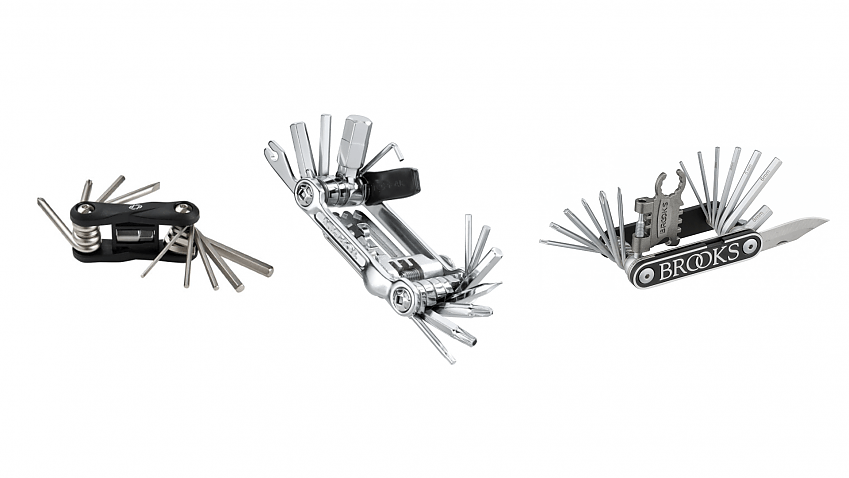 Gadgets don't have to be electronic, and every cyclist ought to have a mini toolkit in their bag or pocket. Be prepared with these.

With 10 tools for £6 (seven hex keys, plus flat, Phillips and Torx screwdrivers), this mini tool is a bargain and small enough (70mm long) to slip in a saddlebag and sort out the commonest trailside maintenance jobs.

Packing 23 tools (including a chain breaker and tyre levers) into 150g, this multitool has most situations covered – there’s even a bottle opener for rest stops. It is available in three colours (gold, silver and black) and comes with a neoprene pouch to stop it scratching other kit in your bag.

As the name suggests, this has 21 tools, including 7 allen keys, 4 spoke keys, 3 screwdrivers, and a partridge in a pear tree (OK we made up that last one). And as the brand name suggests, it’s a rather lovely bit of kit, with a quality feel (and weight – this isn’t minimalist lightweight touring kit) and a smart leather case. 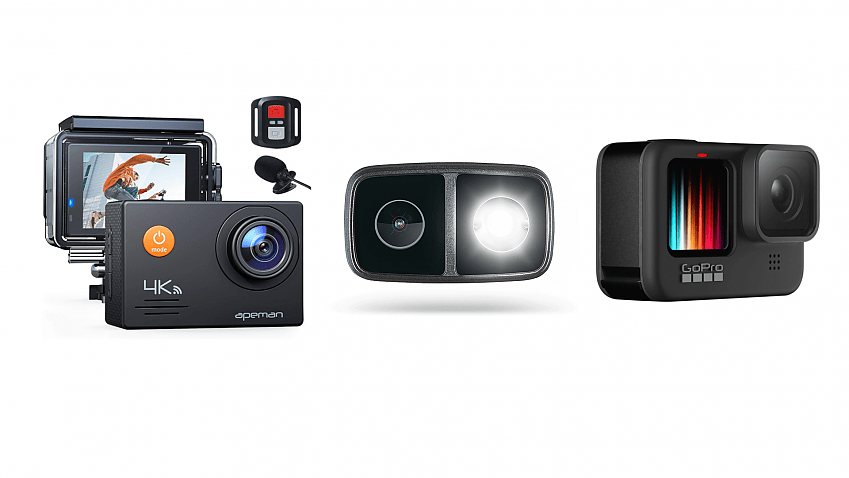 Whether you want to capture adrenaline-fuelled footage or record your daily commute in case of incident, cameras have come on in leaps and bounds..

Leaving aside the slightly odd name, Apeman cameras represent pretty great value for money, with 4K resolution at 30 frames per second. They’re also waterproof to 40 metres, which should mean they survive even the wettest British bike ride, and a range of mounts will fix it to your bike, chest or helmet. Sound quality is one downfall, which won’t matter if you’re adding some tunes over the top of your epic downhill edits but might be a concern if you are more concerned with recording a road-rage incident.

This is a clever bit of kit designed more along the lines of a dashcam than an action camera. Incorporating a 600 lumen headlight, it has “black box” style technology that will automatically lock and protect the footage from being overwritten if it detects a collision. It is waterproof and will record for up to eight hours continuously, looping the recording so you don’t run out of space, or 4-5 hours with the light on. The image quality is decent, too, with 60 fps 1080p resolution and image stabilisation.

GoPro is the go-to name in action cameras, and the latest model steps up the resolution to 5K, with a 20 megapixel sensor giving you more ability to zoom and crop in post-production without blockiness showing up. The Hero 9 also adds a screen on the front as well as the back, and adds even more clever image stabilisation technology, including “horizon levelling”, as well as improved battery life. However, for many people, the Hero 8 at £150 less might be the more sensible buy. 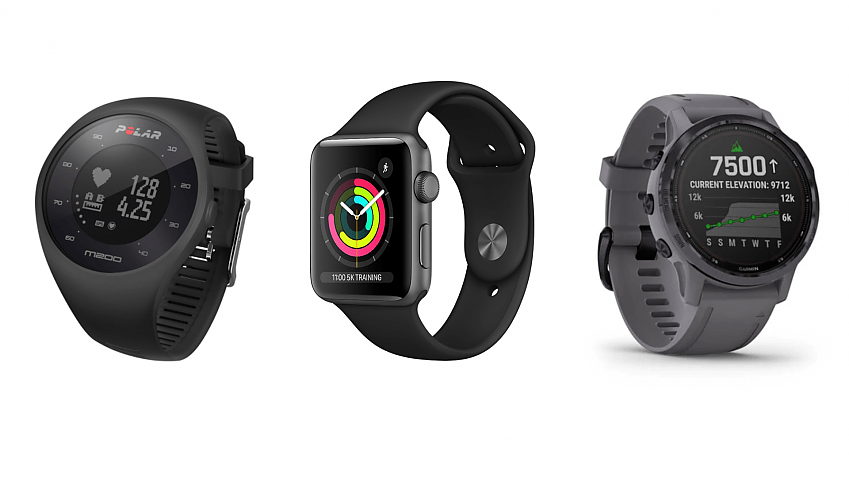 While there are cheaper fitness watches available, those that rely on counting steps are not much use if you want to track a bike ride, so you'll need one with GPS.

It’s marketed as a running watch, but this (relatively) inexpensive GPS device is also suited to cycling, and has a built-in heart-rate monitor (no chest strap needed). You can link it with fitness apps such as Strava and Endomondo to upload activities automatically, and get notifications on screen from compatible smartphones.

If you’re an iPhone user, the Apple Watch is a good smartwatch option. This isn’t the newest or fanciest model – it came out in 2017, a lifetime ago in Apple terms – but it has just about all the tracking and health features you are likely to need, including a built-in heart-rate sensor, as well as seamless integration with your phone for calls and texts. You can also use maps directly on the watch, but only if you have your phone with you – unlike more pricey models, the Series 3 isn’t internet enabled on its own.

Yes, you could buy a new bike for the price, but this is the ultimate in gadget one-upmanship. It looks like something out of Q’s laboratory, with a bright e-ink display showing all manner of graphs and stats, and there are functions for just about every sport you can think of. It will even use its array of sensors (including gyroscope and accelerometer) to tell you how smoothly you tackled a mountain-bike trail. Perhaps more usefully, it has built-in topo and cycling-specific route maps, space for 2,000 songs, and the solar charging glass will give you 10 days or more of battery life (daylight permitting).

Top of the cycling socks View