The winter months are ideal for a cycle tour in India, in January Pam and Steve Livingston set out from Hyderabad and spent 6 weeks cycling around central India.

Pam and I had cycled southern India unsupported three years ago, and loved it. We wanted to go back again to explore further north but were undecided where to start.

A friend of Pam’s daughter comes from Hyderabad and suggested that we go there first. She contacted her Mum and Dad - they contacted us - and we realised that we could be in for a typically enthusiastic Indian welcome.

We weren’t wrong. Manu and Neeru did all they could to help. They met us at the airport, they put us up for two days, they agreed to look after the bike bags and they overfed us. And Neeru wouldn’t let us set off until she’d performed a Puja, or blessing, asking Ganesh, the elephant god of good fortune, to look after us. I think she figured that a couple in their sixties who wanted to cycle 2,000km round India would need all the help that they could get.

Feeling blessed, we set off on the main road south for 100 km. It was a motorway in all but name - an outside lane where the slow vehicles went - an inside lane where the fast ones undertook, and the road edge which was used by us, and motorbikes often driving the wrong way towards us. "That’s India," we told ourselves, and kept our eyes open.

Fortunately, the next day we set off south east on a country road and relaxed as we found that it was quiet with only occasional motorbikes.

The ubiquitous Honda Hero 125cc can carry anything - three or four people, or twenty-four plastic chairs, or more than fifty plastic water pots. Cycle tourists must have been a very rare sight because motorcyclists slowed down alongside us continually, wanting to know where we were from, where we were going, how old we were, and most importantly, could they take their selfie with us? We usually obliged. It cost nothing and made us a lot of friends.

After five days we arrived at Hampi. This was once a major city, six hundred years ago - larger than London was at the time, apparently. Then it was overrun by Persian invaders from the north, ransacked, and left in ruins. Now it is a strange empty plain above the river, with sites of former palaces and temples and many strange boulders of all sizes, scattered across the landscape as if from a giant’s playroom.

One temple beside the river is still complete and is the site of an important festival, Sankranti, which is a New Year and Harvest celebration. It so happened that the festival started the day that we arrived. We had expected an empty area for quiet contemplation, but we found that thousands of people had arrived before us. Everybody was in a happy mood, and just about everyone, it seemed, wanted us to be in their selfie. We joined in and shared the goodwill and were invited by one large family to join their circle on the ground and share their picnic.

We were up at dawn the next day and so were crowds of others, making their holy devotions and immersing themselves in the river. Rivers have a religious significance all over India, the Ganges being the most famous, but here the River Tungabhadra is just as important. We stayed and cycled round the ruins that day. We left the next day and found that everyone else had gone too. Hampi was deserted.

For a long time, I’d wanted to go to Shravanabelagola, just north of Mysore, which was about four day’s ride away. It’s the site of a huge statue of a Jain deity, carved in 981AD, and standing about 58 feet tall.

We rode there through traditional Indian farming country. Here the bullock cart is still the main means of transport, loads of wood are carried on women’s heads and the village tap is still the place for people to meet.

We rode there through traditional Indian farming country. Here the bullock cart is still the main means of transport, loads of wood are carried on women’s heads and the village tap is still the place for people to meet. We often saw groups collecting water, early in the morning, chatting together before filling their colourful vessels, six plastic pots to a hand pulled trolley.

It was hot. Although we were riding in January, the temperature was climbing to 40 degrees by the afternoon. We developed the routine of getting up before dawn and drinking water and eating biscuits that we’d bought the day before, then setting off as the sun rose.

That gave us an hour of cool riding. We’d ride for about 40km until we came across a roadside tea house. These were usually simple places with just one little fire of burning sticks to heat a pot, but we could usually buy a dosa [a sort of pancake] served with curry sauce and coconut chutney.  And of course, a small cup of very sweet milky tea. Not the sort of thing that we’d drink in England – but so refreshing and sustaining in India.

We were always welcomed. Our bikes would be spotted and word would pass around quickly that there was something worth seeing at the local tea house. Everyone was always polite and friendly though, and to be quite honest, it was usually our bikes with their unusual derailleur gears and disc brakes that got most of the attention. Sometimes there’d be a dozen men around them [I expect that women had something better to do] pushing levers and pointing to what was moving. Of course, we’d have to reset the gears when we moved on, but it was all done with respect, and we didn’t mind. 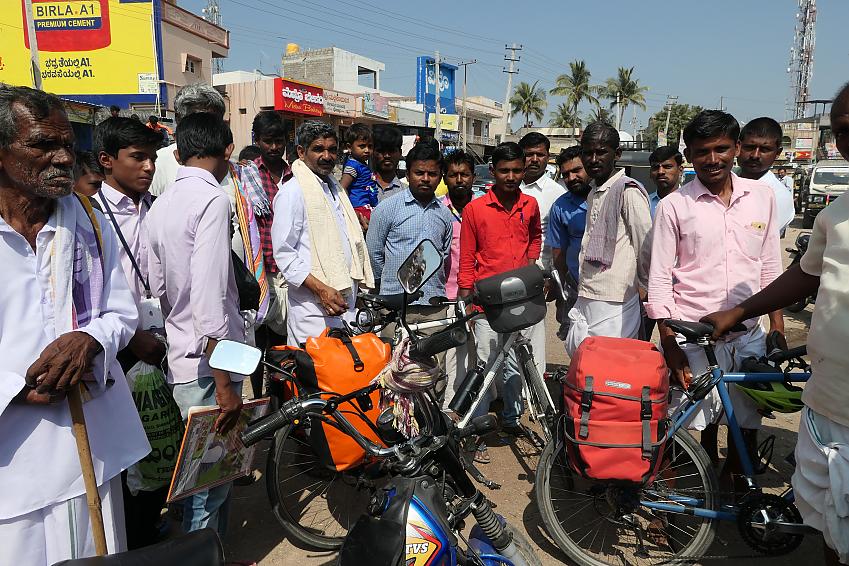 Shravanabelagola was something of a disappointment. The ‘once every twelve years’ festival had happened last year and vast quantities of milk, rice flour and turmeric had been poured over the tallest monolith statue in the world. We found that it was covered with bamboo scaffolding, and the statue was virtually invisible. We could only make out the shapes of dozens of workers inside the vast framework, wiping the holy statue gently with scrubbing bushes. I thought that it was going to take more than a year to get it clean enough for the next festival.

We turned north west now and headed for the coast, and Goa. Our way led through the Western Ghats, the range of hills which run along the west of India from Mumbai to the southern tip. We climbed up into forest, away from the farmland to an area where it was less populated and wilder. We had been worried about the condition of the roads, but it seemed that Karnataka, the state we were riding through, was spending a lot of money on resurfacing. Traffic was usually light and lorry drivers generally steered round us, giving us a wide berth.  Unfortunately, many trucks were overloaded and must have been difficult to handle. Although there were crash barriers, most of these had been smashed apart at the bends.  I couldn’t help but think of the meaningful signs we saw so frequently by the roadside – ‘Drive Carefully, Live Joyfully’. 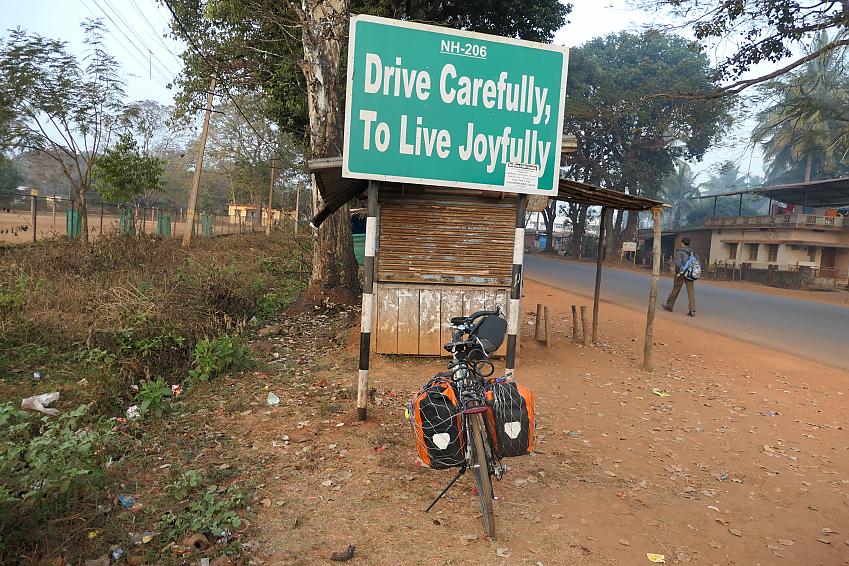 Fortunately, we enjoyed cruising down the hairpins of the long hill to the coast on fresh tarmac and didn’t end our trip by flying through a missing crash barrier. We’d been looking forward to arriving at Goa and planned to give ourselves a short holiday of sun, sea and sand.

What a surprise. I’m not sure what we’d been expecting, but we certainly weren’t ready for lines of restaurants blaring loud music and blackboards on the beach promising live Premier League football.  Still, if you’re going to be a cycle-tourist you must adapt, so we found a cheap room behind a restaurant and made for the beach.

We rode north up through Goa, staying at beach resorts, to the capital, Panaji, before heading back inland to climb up the Western Ghats again  One day, riding on a road which was unusually quiet, we stopped at a level crossing, at the same time as a monstrous locomotive was passing, pulling what seemed to be an endless train of carriages. We leaned on our bars and looked up at all the passengers moving slowly by until the last carriage left and revealed why our route had been empty.

There were major works on the other side and the road was missing. Our dilemma was spotted by the workers there. Shouting and laughing they dropped their tools, strode over to us and picked up our bikes and still laughing, carried them across the heaps and cavities of their works and placed them on the tarmac on the far side. That event required multiple selfies of course, but we were happy to oblige, both for their good humour and for the prospect of many more miles on an empty road.

Later, we’d just checked into a small hotel in a town called Ilkal when we heard the noise of a celebration below us. Outside on the street, in the cacophony of drums and amplified music we found a party of men and women dancing before a long line of colourful women who were carrying ceremonial pots on their heads. Their bright appearance was made even more radiant by the dozens of tiny mirrors which had been sewn onto their costumes. They were Indian, but not as I’d seen before.They were Lambada people, I learned, a tribal group in India, and this was their special day, 15 February, the birthday of an honoured leader who’d died about a hundred years ago. We could only watch, enthralled and slightly deafened, at yet another unexpected spectacle the like which makes India so amazing.

We arrived back in Hyderabad six weeks and 2170km after we first set out. Manu and Neeru were delighted and baked a cake in celebration. We could only thank them, and the elephant god Ganesh, for helping to make it possible. 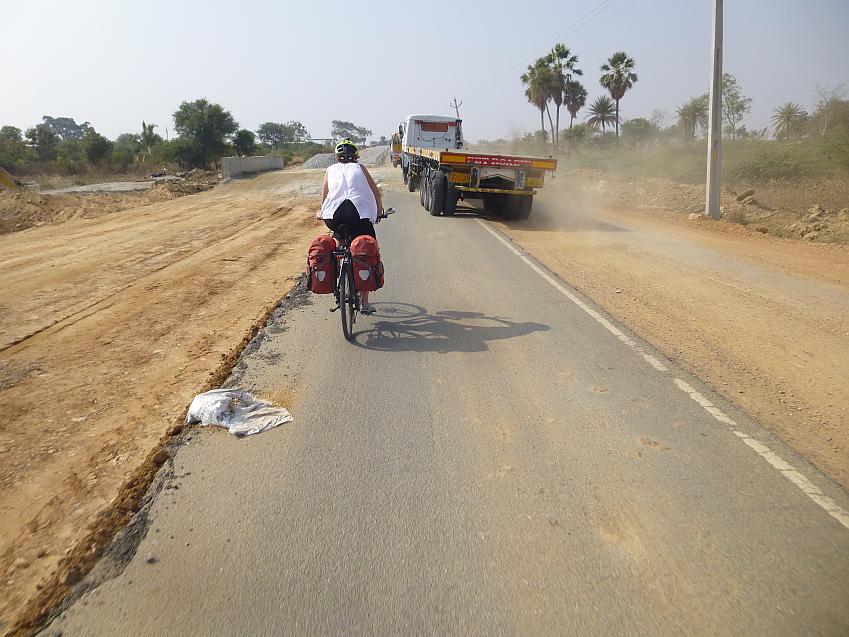 Route: We rode down the NH7 south for 100km to Mahbubnagar, then south west via Raichur to Hampi.  From here we used a combination of roads to Shravanabelagola before turning north west and riding to Honovar on the coast. We rode north up the coast through Goa to Panaji before riding back to Hyderabad via Badami.

Conditions: We were there in January and February.  The temperature at sunrise was about 20 degrees C, rising to 40 by mid afternoon.  We had no rain.  Road conditions were excellent, except for parts where roadmaking was in progress.

I'm glad I had... a Garmin Oregon GPS with India City Navigator.  This was incredibly useful in helping us to navigate through Indian towns.
Next time I would... try to learn useful phrases in Hindi.

A visa is necessary for India and can now be obtained on-line. It costs $75 plus an admin charge.

Most middle east airlines allow 32 kilos baggage, which allowed us to pack our bikes and almost everything else into soft bike bags. It’s useful if a friend can look after your bag, otherwise a hotel will do it though they may ask for a fee.

Restaurants are plentiful in India, and the food, contrary to popular belief, is good, and wholesome. If you can see it being cooked, it’s safe. We found hotels in every town. The price was generally £10 to £15 per night for a double room.

Great Rides: Karen Darke's journey of a lifetime along Australia's Murray River View
Cycling UK continues to support the UK to cycle
This remains true during this difficult period with the ongoing threat of coronavirus Covid-19
Read our latest advice on cycling