Great Rides: Japan in the spring

Great Rides: Japan in the spring

It’s more than 2,000 miles from one end of Japan to the other. Cycling UK member Frank Burns rode it in spring.

Three days from my journey’s end, I was caught on a wild, exposed stretch of highway by a horrendous storm. Wind and rain lashed me from every direction. Heavy trucks threatened to drive me off the road. Through the murk, and in the middle of nowhere, I spied a little brick building: a refuge!

Opening the door, I found myself in a small food store. The owner was busy restocking his shelves, the floor scattered with empty boxes. I stepped onto one of them as I rounded an aisle, eyes scanning the shelves. I slipped and fell hard, landing atop the sharp end of some gas canisters on the leg I’d recently broken in a cycling accident. The pain was excruciating.

As I lay on the floor, the store owner simply ignored me. Eventually I hauled myself onto a stool. An hour later, somewhat recovered and fairly confident I hadn’t fractured anything, I gingerly headed back out into the storm.

It was 20 miles to the next town. Luckily it had thermal baths (‘onsen’). Soaking luxuriously in one, the pain ebbed away. I decided there and then that, when I got home, I would dig out my own back garden and install an onsen of my own. It was bliss. 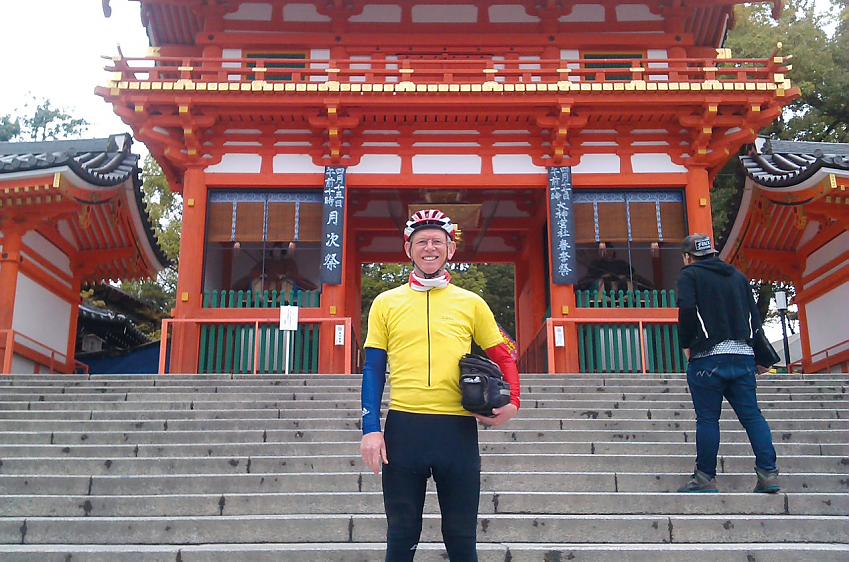 Frank at one of the 2000 shrines and temples in Kyoto

The trip was a Japanese end-to-end, from Cape Sata in the south to Cape Soya in the north. It’s more than two-and-half times the length of a UK end-to-end. It traverses a series of four islands that are 75% mountainous; you don’t look for the mountains, they will find you! Headwinds from Siberia can stop you in your tracks for days. And the climate difference between the sub-tropical south and the sub-arctic north is huge.

I planned my journey to coincide with Japan’s cherry blossom spring. Mother Nature has her own timetable, however, and threw an unexpected spell of cold weather at Kyushu. So my idea of cycling north with the blossom for weeks were held in abeyance – until the spring finally caught up with me as I travelled.

When it did, I basked for five days in the pink splendour, watching the Japanese pursuing uncharacteristic hedonism with their ‘hanami’ parties under the cherry blossom, liberally lubricated with sake.

My joy on these long trips is to allow serendipity to work its magic when deciding where to sleep each night. I was hosted by seven members of the Warmshowers network, all of them exceedingly kind and welcoming, ranging from retired doctors to a young research student in his bedsit. In the mix were a Canadian, an English couple, and two mixed Korean/Japanese couples.

Most other nights I pitched my tent in the gardens of shrines or temples. Sometimes I slept inside the temple buildings, or in empty cabins, bus shelters, or ferry terminals.

I was given the key to the annexe of a temple, then invited to a sake drinking party by the warden of a shrine.

One evening, I was given the key to the annexe of a temple, then invited to a sake drinking party by the warden of a shrine. I was taken to thermal baths and restaurants by complete strangers. I was even given a 1,000 yen note (about £4) by a man I met by the roadside. A retired teacher turned orange farmer kept giving me oranges while we chatted…

The sea of Okhotsk

To avoid 1,000 miles of continuous urban riding along the Pacific coast of Honshu (and the inevitable traffic lights every few minutes), I headed up to the Sea of Japan on the west, knowing full well that I would be confronted by extremes of weather.

For five days I had a ferocious headwind coming straight at me from Siberia. On the fifth day, about to throw in the towel, I had a reprieve thanks to the many sheltered road tunnels that cling for miles to the cliff face.

Once on Hokkaido, the most northerly island, I knew things could get even more extreme. In deepest winter they can get up to 16 metres of snow (50 feet!). It was on Hokkaido that the aforementioned rainstorm hit me. Later, a huge tailwind enabled me to cover two day’s worth of riding in one – 120 miles to reach the most northerly town, Wakkanai. 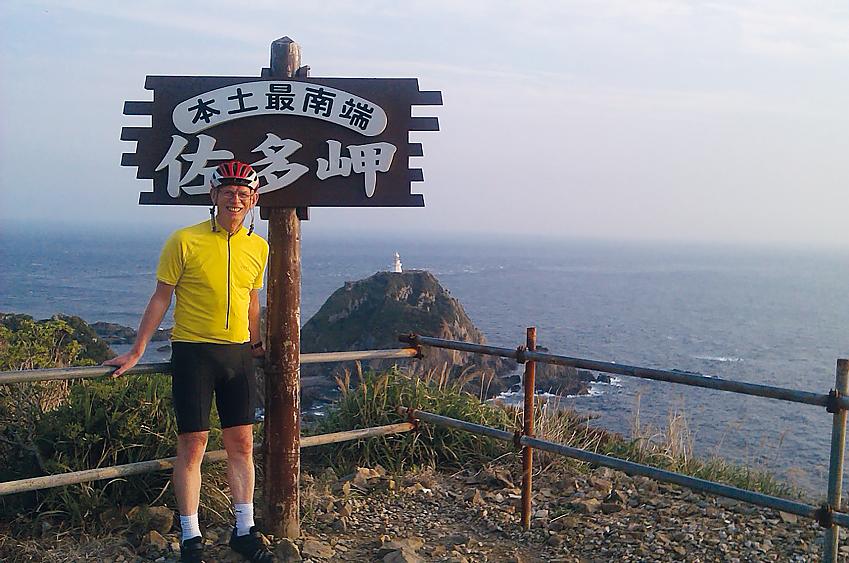 Before venturing out to Cape Soya, I first headed out to Rebun and Rishri, the Outer Hebrides of Japan. Rishri has a towering snow-clad volcano, a veritable twin of Mt Fuji. I spent my final day wheeling along its lower slopes, and my final night in a ‘five star’ bus shelter. Not only did it have weather-proof French doors, but even a dust-pan and brush for ‘mucking out’ in the morning!

Cape Soya is one of those destinations that gives the feeling of being on the edge of the world. The waters around it have been the scene of many wartime incidents, and the people betray a toughness characteristic of frontier people. Amongst the many monuments are those dedicated to the sinking of a US submarine in the last war and the shooting down of a Korean airliner in 1983.

I left Cape Soya with poignant memories of Hiroshima, of cherry blossom, of medieval castles, and of the heart-warming kindness of the people.

Route: From Cape Sata, the southerly tip of Kyushu, to Hokkaido’s Cape Soya.

Conditions: The south has a climate like the Canary Islands, but the whole of Japan (apart from Hokkaido) has unbearably hot humid summers. So spring and autumn are the best times to go.

Accommodation: I carried a small tent but never once saw a campsite, so pitched it in the gardens of temples and shrines or in small parks.

Navigation: Japanese maps at a cycling scale are hard to find and written in ‘Kanji’ (Japanese script).

I’m glad I had: Three buffs, a Petzl LED head torch, and my phone (which I used for blogging, taking photos, news, weather apps, books, etc).

Next time I would: Take a back-up phone, minus SIM card. Travel even lighter.

Do it yourself travel tips

I flew London-Tokyo direct with British Airways as my boxed bicycle could travel free of charge, so long as I kept the check-in luggage below 23kgs.

The rest of my kit was carry-on luggage.

Cycling UK Vice President Josie Dew has written two books about her experiences cycle touring in Japan: A Ride in the Neon Sun and The Sun in my Eyes. Both are good.

My life as a cycling student in Japan View