Deep in the Scottish Highlands, in a remote glen with far-reaching views in all directions and not a soul in sight, I stop pedalling and roll to a stop. I look down the long valley and up to the mountainous peaks in the distance, daunted by the journey that lies ahead. Only by looking back and seeing how far I’ve come am I able to reassure myself that I can do this. “This is epic,” I say out loud.

I’m cycling the Great North Trail, a new long-distance cycle route devised by Cycling UK, which stretches from the southern Peak District to the tip of Scotland, covering over 800 miles (1,300km) of trails and 14,000 metres of climbing. The vision, ultimately, is to join it with another starting at Land’s End, culminating in the first official off-road Land’s End to John o’ Groats (LEJOG) route.

It’s an ambitious project. Cycling UK’s Sam Jones told me how it came about: “The idea for an off-road LEJOG came as a eureka moment last September. We were sitting around a table with colleagues, trying to come up with an idea that would excite the wider public whilst also furthering Cycling UK’s ambition for connecting the National Trails. When we looked at the map, and saw where the National Trails were, and where our planned routes sat, the idea of an off-road LEJOG took shape. As soon as the seed was planted, all I knew was that I wanted it to happen and that I hopefully would ride it myself one day.”

Although England and Wales already have 16 National Trails, only two of these in England (the Pennine Bridleway and the South Downs Way) can currently be ridden from end to end by cyclists and horse riders. In 1968, Cycling UK (then CTC) campaigned and won the right to cycle on bridleways, while the Land Reform (Scotland) Act 2003 allowed riders there the same access as walkers. Together, these factors have made the Great North Trail project possible.

“Finalising the Great North Trail is the first step to giving people more opportunities to explore Britain’s countryside on a bike, whether it’s for a long-distance challenge or just for a day’s ride,” said Sophie Gordon, Cycling UK’s off-road campaigns officer. “Cycling UK’s vision is of a connected network of National Trails that can be enjoyed by everyone, whether they are walking, cycling, or riding a horse.”

This aspiration reflects the original vision of Sir Arthur Hobhouse, whose 1947 report proposed the creation of long-distance paths and bridleways connecting the new National Parks: “There should be continuous routes which will enable walkers and riders to travel the length and breadth of the National Parks, moving as little as possible on the motor roads,” he wrote. “This isn’t about racing, it’s not about endurance or pitching yourself against the elements, it’s about something more primeval; the opportunity to be close to, and at one with nature, to connect with and explore the countryside and to travel through landscapes that have barely changed in hundreds of years.” 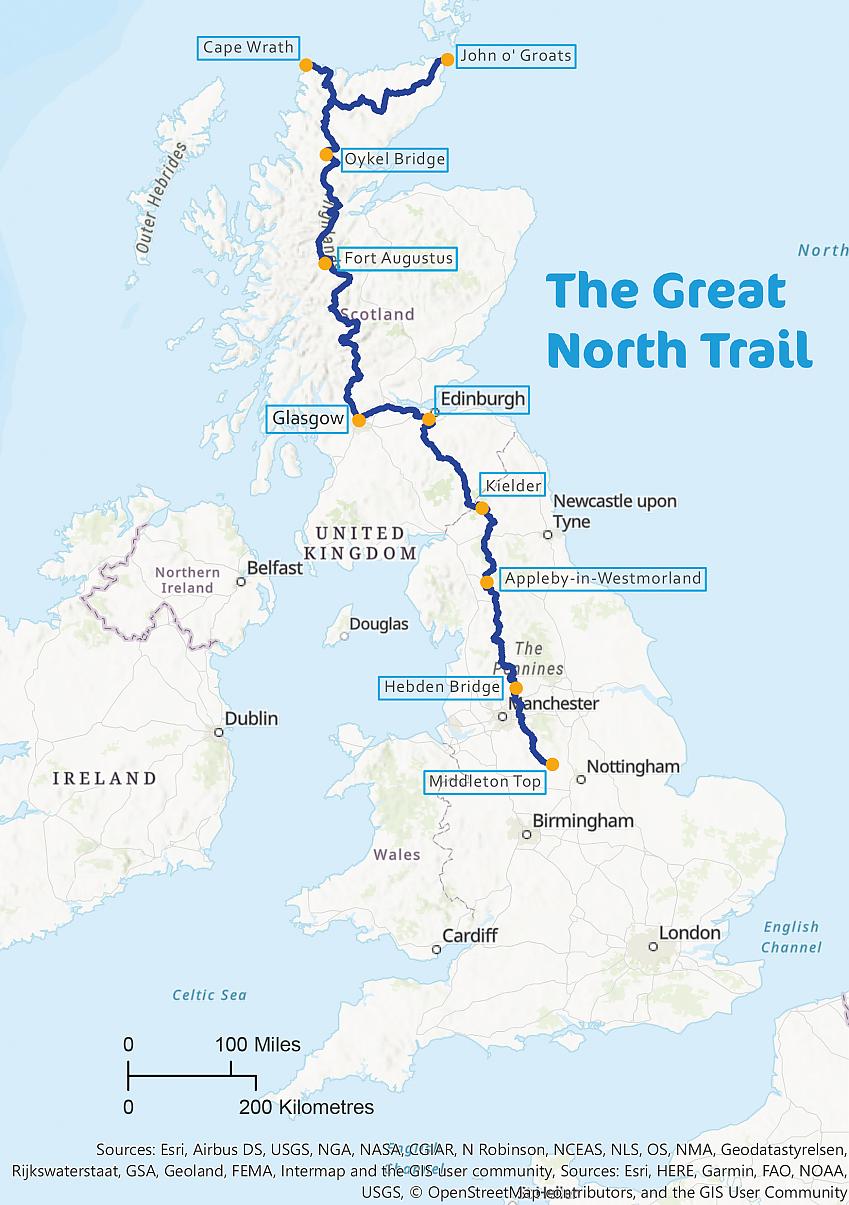 The Great North Trail is not designed to be the easiest, most direct, or fastest route, but one that provides stunning scenery, good riding, and adventures, whilst being suitable for walkers, cyclists, and in many places horse riders.

To test it, I set off from the Peak District one sunny morning this summer. The route kicks off along the well-surfaced and signposted High Peak Trail. This familyfriendly traffic-free route provides an easy introduction to an epic ride. By the time I’d reached the rougher, tougher and literally grittier Dark Peak, I had plenty of miles under my wheels and was looking forward to the wilder moorland trails.

The ancient roads and moorland trails through the northern Dark Peak were a stark contrast to the lush green, rolling fields I’d left behind, especially as I’d chosen to ride the harder alternative route via Mam Tor and Jacob’s Ladder. It was an interesting experience with a fullyloaded and rigid bike rather than the fullsuspension bike I’d usually ride on this terrain. As well as arm-pump, it added to the sense of adventure.

Next up: the South Pennines. It’s a place that has lots of great riding, with moorland crossings on packhorse trails combined with steep, technical, rocky trails down into the valleys. However, the tough hills, grassy terrain and numerous gates, coupled with a loaded bike and consecutive days of riding, began to take their toll. It was with great relief I finally rolled into town for my overnight stop.

After a pleasant evening refuelling, chatting with locals and trying some regional cuisine, I was reminded that it isn’t just the riding or terrain that makes epic rides special. It’s also the experiences and interactions with the people along the way, the different accents, habits, and local food – which I was eating in abundance to fuel my riding.

North along the Pennines

Entering the Yorkshire Dales felt like a geology field trip. If you’ve never seen limestone pavement, a dry valley, sinkhole, or scar, you cannot fail to be impressed. The limestone landscape also provides numerous waterfalls and caves, such as Gaping Gill. Fell Beck pours over a lip of rock here, falling 98 metres (322ft). It’s the highest unbroken waterfall in England. The stream resurges nearby in the enormous and eerily beautiful Ingleborough Cave.

Before long I was leaving the lush lower farmland and wooded dales behind and climbing over stark and barren moorland. Often called England’s last wilderness, the North Pennines has the widest diversity of rare habitats in Britain. ​

Haltwhistle in Northumberland marks a boundary: Hadrian’s Wall. Built to guard the frontier of the Roman Empire in AD122, it now sits 30km south of the Scottish border. There is a 277km Hadrian’s Wall (NCN72) Cycle Route, which runs from the east coast to the west, following the wall. My journey, however, continued north. Even though Haltwhistle claims to be at the geographical centre of Britain, I wasn’t even halfway along the Great North Trail.

North of the wall was like no-man’s land. Riding through this expansive forested area, I couldn’t believe how far I was travelling in England without seeing anyone, only startled deer. Then I arrived at a hive of activity deep within the forest: Kielder Water & Forest Park, the biggest man-made lake in Northern Europe and the largest planted forest in England.

This 250-square-mile location offers plenty of adventure, with wild camping, water sports, walks, and seven cycling trails for all abilities. It’s a wonderful place to explore further with the whole family. You can, like I did, include some of the red graded man-made trails into the Great North Trail route.

From Kielder, I descended to Scotland. The landscape remained sparsely populated but there was a more subtle change: different access laws. Despite cycling alone, I felt more welcome and relaxed.

Knowing you are able to ride on any track is liberating and exciting. There are so many to explore here: old drove roads, hillside access tracks, old military roads, and more. The Great North Trail runs through the Tweed Valley, an MTB mecca that attracts cyclists from all over the UK, thanks to its numerous top quality routes and facilities. I could easily have spent a few fun-filled days there. Instead, I continued over the rolling hills of the Pentlands, before a lovely serene, canal towpath led me into the bustling streets of Edinburgh.

The Central Belt has the highest population density in Scotland, with 3.5 million people living there. Yet it didn’t feel busy as I rode along the tranquil Union Canal, following the towpath straight into the heart of Scotland’s largest city, Glasgow.

Thanks to its enlightened access laws, there’s a choice of long distance off-road routes through Scotland’s countryside: the Cape Wrath Trail, with around 400km of riding from Fort William to the northwestern tip of Scotland; the Badger Trail, 320km from Inverness to Glasgow; the Great Glen Way, 125km between Fort William to Inverness; and the An Turas Mor trail, which runs from Glasgow to Cape Wrath. The latter is the route of the Great North Trail.

When I officially entered the Scottish Highlands at The Falls of Leny near Aberfoyle, it felt like I was nearly at journey’s end. I wasn’t. The Highlands are huge. I cycled through remote mountain ranges on old military roads and along access tracks leading to hydro power stations.

The tracks went on and on, into a true wilderness, with limited facilities and no sight of anyone for hours at a time. I’ve ridden in Scotland before but its remotest hills never fail to give me goose bumps.

After days of riding, I left the quiet hillside tracks. I was sad to leave the solitude behind but buoyed by the smell of sea in the air. Or was it fish and chips?

The Great North Trail took me to Cape Wrath. However, my journey wasn’t over. I wanted a picture at the other end point, John o’ Groats, followed by a visit to Duncansby Head, where a lighthouse stands on the cliffs.

Everyone needs some adventure in their life – and this route certainly delivers that. The only decision that really needs to be made is how much of it, or which part of it, will you sample? 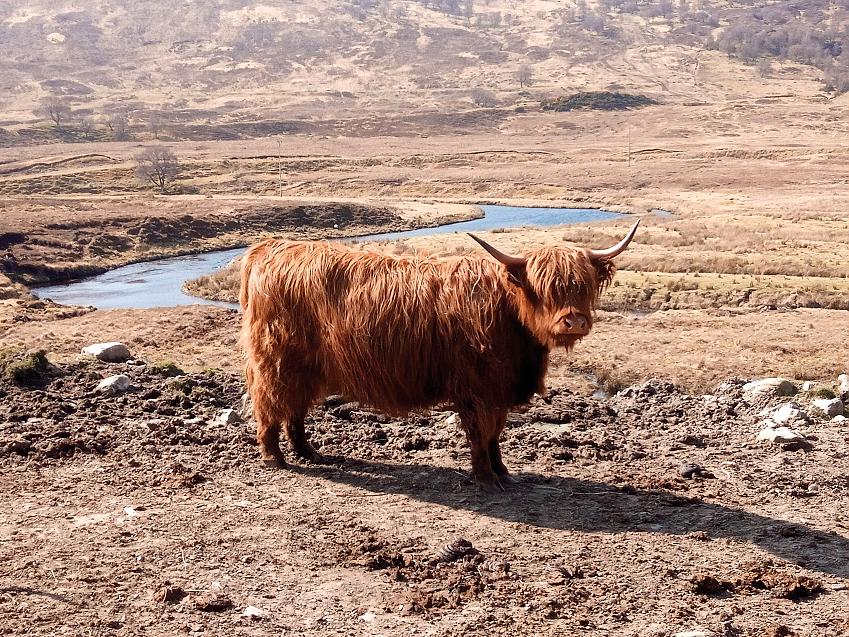 Max Darkins is the man behind the Rough Ride Guide series of mountain bike route guides.

What bike for marathon riding? 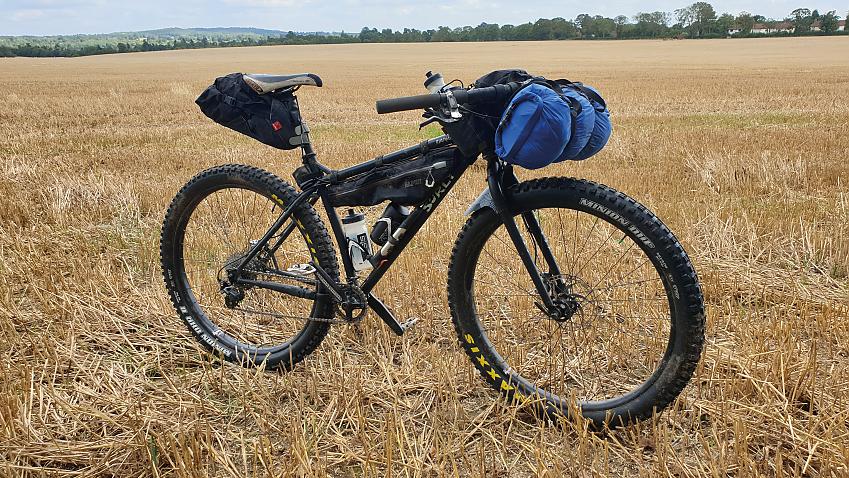 With a long and varied route like this, there will always be an element of compromise. The right bike will depend on you and your priorities e.g. comfort, efficiency, speed. I’d recommend a hardtail or shorttravel (100mm) full-suspension bike, preferably with 29in wheels and lightly treaded tyres 2.2in+ wide. However, much of the trail is suitable for a gravel bike or a rigid 29+ bike (29×3in tyres), which is what I rode.

Whatever bike you choose, a range of low gears is important, especially on a heavily loaded bike, as pushing will be worse than riding. Keep loads on your back to a minimum and spread luggage around the bike instead.

Invest in a frame bag, seat bag and bar bag. When packing, put lightweight gear and snacks on the handlebar, items that need to be accessed during the day (phone, charger, route map, tools, money, etc) in the frame bag or top tube bag, and items you shouldn’t need while riding in the seat pack.

You could use panniers, but be aware that they will likely make the handling and lifting of the bike cumbersome on certain sections of the trail.

The Great North Trail is a part of Cycling UK’s larger vision, with this route ultimately to be connected to another from the south west to the Peak District.

That will start at Land’s End and link up to create an off-road version of LEJOG. Other interlinking linear trails are also in the pipeline. For example, one is planned that will link Stonehenge with the Surrey Hills, the North Downs, the South Downs and the Ridgeway.

You’ll be able to ride from Dover to Cape Wrath or from London to Land’s End along some iconic trails. There will also be shorter circular (day) rides that branch off.

You can download a GPX file of the Great North Trail as a whole or smaller sections.

How do we know he is the first person to do this trip? He might be the first to record it and notify Cycling UK, but other than that it could already have been ridden dozens of times.