Tour leader course: Get paid to ride your bike

The art of navigation is pretty crucial if you want to be a tour leader. Photo: Cycling UK/Patrick Trainor
By PatrickTrainor
Tuesday, 11 July 2017

Tour leader course: Get paid to ride your bike

Have you ever considered how you could convert your passion into a means of making money? If the answer’s “yes” and your passion is cycling then Cycling UK’s Tour Leader course could be for you. We sent keen cyclist Patrick Trainor on one of our courses to find out more...

Group rides up and down the country tend to have one constant: a group leader. This person is loved by experienced and novice riders alike; someone who knows a route and doesn’t mind directing the group around it, making decisions so the group doesn’t have to.

If you’re this person or have led groups you’ll know just how much you have to think about when deciding a route. If you think you’re good enough to do this, and get paid for it, then you’ll need to prove you can do it by attending a recognised course and getting a professional qualification for it. This is exactly what Cycling UK’s Tour Leader course does.

The Tour Leader course is a recognised qualification which allows you to lead cycling groups on road worldwide with very few exceptions. Similar in stature to the Mountain Leader hill walking or Mountain Bike Leader qualifications, the course covers all the necessary skills needed to ensure the leader can safely and successfully take a group out on a road ride no matter the location.

Enrolment on the course is very straightforward, the only stipulations are that you have to be able to ride a bike, have a reasonable level of fitness and a relevant up to date first aid certificate. Experience of riding in different locations is a bonus but not necessary.

Most people undertaking the course have some experience of leading a group already, whether on a bike or, as on our course, hill walking or skiing. Again, this is not necessary as common sense and a willingness to learn are more important.

Most people undertaking the course have some experience of leading a group already whether on a bike or as on our course, hill walking or skiing. Again this is not necessary as common sense and a willingness to learn are more important

Pre-course information is kept to a straightforward minimum with a several page document outlining what topics and format the three day course will take. Having just the main topic areas gives you enough to think about what you will be doing without over complicating it.

Courses take place in several locations across England at various times of the year, apart from deepest winter, so weather will be a factor, but not a crucial element. The course I attended was in the beautiful Yorkshire Dales at Hawes.

Not being familiar with the area was a bonus for me as it made it more akin to a real-life guiding assignment where you may not know the area but have to take a group out. You begin to unconsciously monitor the surroundings as soon as you arrive; what is the terrain like, traffic levels, road layout, road condition and classification, weather and local amenities.

Starting at noon on the Friday made for a relaxed start at the town’s old railway station which is now a café and bike shop, as well as a visitor centre for the Yorkshire Dales. This was very handy for several of the participants as they had flown in from Switzerland specifically for the course and were able to rent bikes on site. Over a cuppa introductions were done and a brief outline of the course was given.

The first afternoon is the most classroom-intensive part of the course, with a short PowerPoint presentation to describe the course and cover legal and admin areas, but thankfully there wasn’t actually that much. Once the necessaries were covered it was out to the bikes and this was pretty much the classroom element over for the weekend.

The group took it in turns to lead the ride

First topic was looking at our own kit and making sure it was fit for purpose. Clothing and helmets were checked, with an emphasis on helmets – checking for damage and making sure they fit correctly as this will be a crucial part of any pre-ride check when taking groups out.

Then it was bikes and looking at the different types; there were mountain bikes, road bikes, a touring hybrid and several gravel bikes. I choose to use a gravel bike – a cyclo-cross bike with more relaxed geometry – but realistically any bike will be fine to use on this course as it is on the road.

The only suggestion I would make kit wise is to use flat or SPD type pedals as there is a lot of stop/start standing around when out on the road as you discuss various topics.

Saturday morning was an earlier start, but again a cuppa and a chat eased us into the day, and after a few minutes in the classroom to go over the day ahead it was outside once more. First topic was mechanical competency and how to do a simple check to make sure a bike is roadworthy.

We were introduced to the M check, which involves examining a bike starting at the rear hub area then moving to the saddle, down to the bottom bracket before moving up to the handlebars and finishing at the front hub. This sweeping check allows you to identify any problems quickly and easily. Our mechanical skills were then tested with various problems presented to us which we had to identify and fix on the spot.

The afternoon saw us hit the road as a group on a short 16km ride in the area. This may have only been a short distance, but when you have to recce the route and assess everything along the way it can be longer then you think.

Checking junctions, road surfaces, road width, traffic levels, town centre traffic and parking, trying to decide pedestrian intentions and weather conditions makes it more mentally demanding than physical. Then it was back to the classroom for more tea – there’s a theme here – before retracing the route on a map.

Seeing the route in print in front of you makes you appreciate the features on a map more, and being able to visualise them helps when planning other rides. This was then divided up into eight equal distant sections which we would each have to lead the group through the next day.

We all agreed on grid references where we would each be starting and finishing so we knew exactly where each would take over. Looking round you could see each person going over their section in their mind and assessing what was in it and how they would take the group through it.

Then the instructor threw in the curveball that we would be doing the route in the reverse direction from which we rode it today. This may not seem like much, but it can actually completely change the ride and you really have to think it through again.

Sunday started with a fun bike-handling-skills test. This involved various easy riding tasks as individuals and teams to show the differing levels of riding skills among the group in a light-hearted and non-competitive way.

This is a great way for the group leader to identify those who are confident and competent and those who may need more coaching and how this may affect them out on the road. We each also had a simple lead of the group around a large car park so we were all clear on which signals to use when out later. 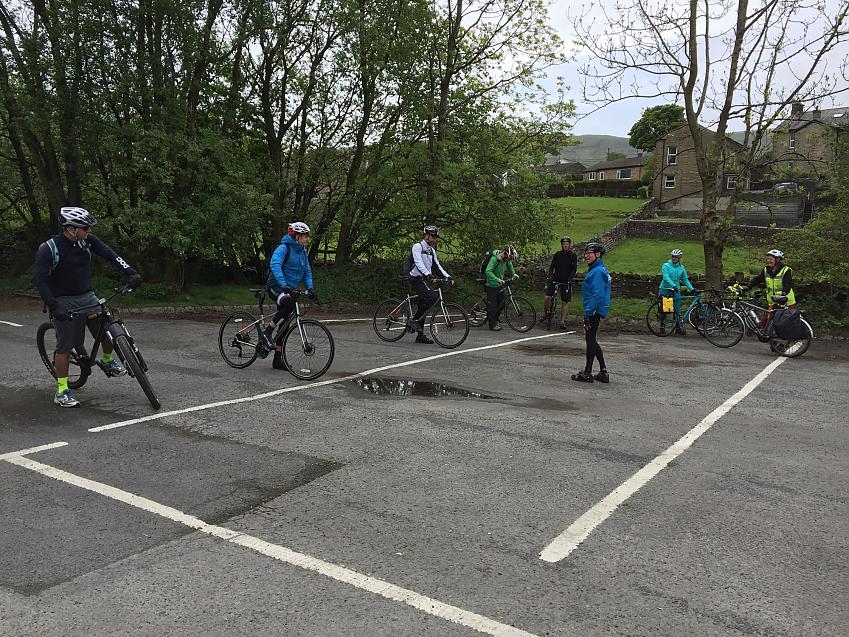 Then after more tea it was out on the assessment. Another curveball came from the instructor as we were told we would each have a different problem thrown into our section, such as mechanical, sickness, lost rider, puncture and so on, and we wouldn’t know what it was until it happened.

It was really interesting to see the different leadership styles being used. I think we all learned from each other different ways of dealing with things.

We may have only had short sections to lead, but again, in reverse direction, with a problem scenario thrown in and under scrutiny from the instructor they seemed much longer.

To compound things on the ride, one of the villages had their annual Morris dancing display taking place just as we arrived which blocked the road for a while. I don’t think we could have accounted for this the day before, but it just goes to show anything can happen on the day and it’s not all bad!

Finishing the route it was back to the classroom for the course debrief over another cuppa. We all commented on how different our leading styles were, but that we each learnt something from each other, as well as the instructor, which was invaluable.

We were all taking on this course with a commercial interest as we all want to use it to gain more work or already have work lined up which helps sharpen the mind during training. Happily we all passed the course and in the one-to-one with the course instructor, we received helpful feedback on any areas where we excelled or were weak, followed up with suggestions on how to strengthen them.

I felt this course was a bit like a bike fit: either you go and they don’t change anything and you’re happy knowing you are right but you’ve just spent a fair bit of cash, or they change everything which can cause doubt in your abilities but at least has set you on the right path. Happily I was the former, so it was good to know I have been doing things correctly.

Having the Tour Leader certificate has already got me paid work as a ride leader with private companies, making it well worthwhile. I had been offered ride leader work before but without the certificate it was rarely paid and only with expenses covered and experience gained. That has already changed and made me more confident in my own abilities as a group ride leader.

So if you are a group ride leader and think you are good enough to get paid for it, this course will prove it!

How to: take the lead on a club ride View