How to: take the lead on a club ride

How to: take the lead on a club ride

“What do we do now?” asked John, one of the participants on the course that November day. It was a valid question. We had been hurtling down a long descent following a trainee leader. When we turned around, the back half of the group was nowhere to be seen. “We don’t do anything,” I replied. “The leader must decide.”

I was delivering Cycling UK’s new Club Leader course, a one-day intensive course for ride leaders. We had designed various scenarios to see what decisions the trainee leaders arrived at.

Some scenarios were relatively common events, such as losing someone off the front of the group or a rider stopping because of a puncture. Others – a crashed cyclist, for example – were events that happen rarely.

In either case, though, what I was looking for was the trainee’s reaction. Resolving problems in a practice scenario is a great way to learn.

That day’s course was being delivered to a group of triathletes. Triathlon is booming nowadays, especially after the Olympics and the ongoing success of the famous Brownlee brothers.

Triathlon England – the sport’s governing body in England – is keen to develop its club network and lead more rides, targeting newcomers to cycling in particular. The organisation has asked Cycling UK to train its leaders all over the country. 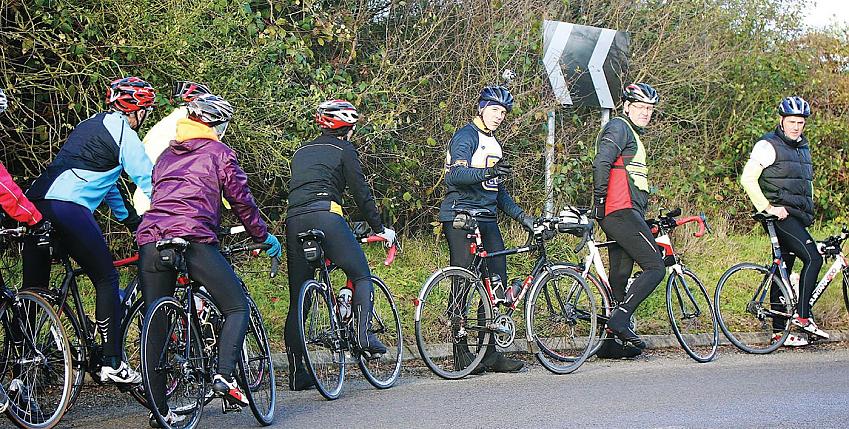 Steep bends may require singling out

The day-long course was broken up into different sessions. In the morning, we looked at why people want to lead rides and why cyclists come out on club rides.

We examined the basic principles of ride assessment and route planning. And we looked at group leadership techniques, such as where the leader ought to position themselves, and at what to do in hypothetical situations.

Trainees were paired off to lead rides together. Each pair got a map to look at the designated route to identify how they would lead the ride over their section. Then it was time for the fun bit: we went out for a ride. That’s where we ‘lost’ half of the group…

The Club Leader course caters to a different audience from Cycling UK’s other Ride Leader courses. In the latter, the leader may have to deal with inexperienced cyclists and badly set-up bikes.

Participants on a club ride are often already enthusiastic cyclists, so there’s less pressure on the leader to assess the abilities of the riders or the roadworthiness of their bikes. Those areas are still covered on the Club Leader course, but the focus is more on passing on group-riding techniques to the participants, and on keeping the group together without stopping and starting too often. 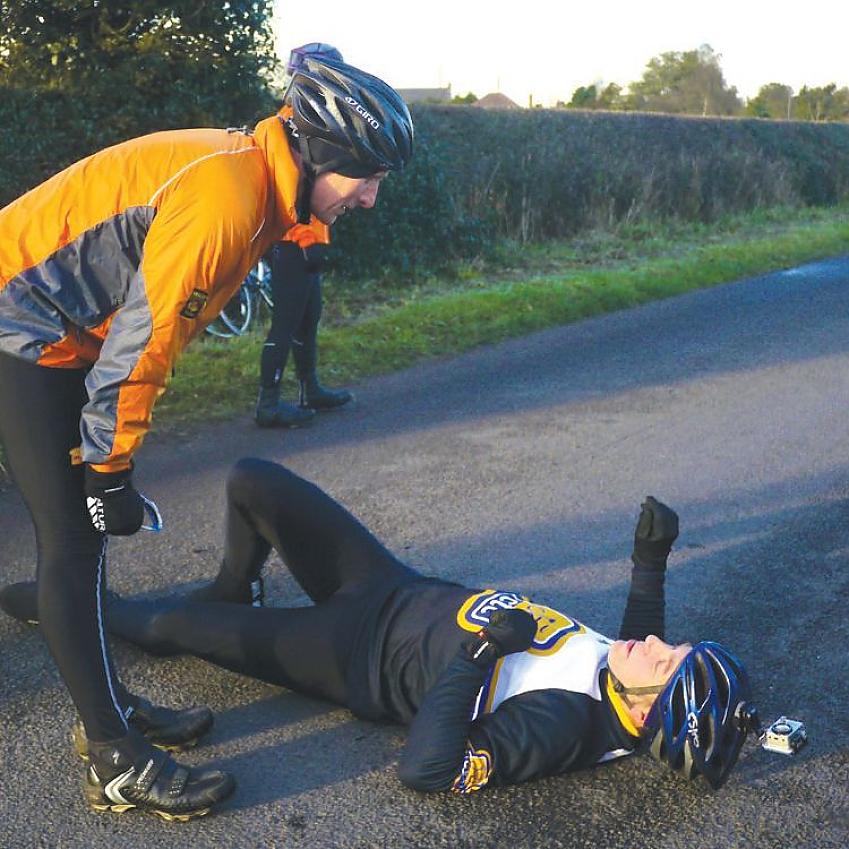 Dan fakes a crash to test the leader

The front leader looked back, but by then we had travelled a fair way downhill. I had been doing my best to keep the group moving, surreptitiously obscuring the front leader’s line of sight behind. It’s interesting how little it takes to keep a group of cyclists moving – I didn’t need to say anything.

Eventually we reached our pre-designated stopping point and the leader suggested we wait there for the others to catch up. (At the start of the course, I had stressed the need for re-grouping points for rides.) As this was a practice scenario, it wasn’t long before the back group arrived, including the ‘casualty’.

It was a club ride from hell, with hill breakaways, chains off, cyclists ‘knocked off by cars’, people getting lost

We had a discussion about the best ways to regroup in these kinds of situations. The leader identified the regrouping point. Another participant brought up what she called the ‘10 minute rule’. If we were still waiting after 10 minutes, she would send someone back to see what was wrong.

The review session after the ride continued the group discussion. There were two clear questions for the participants: What went well? What could you improve next time?

The aim was for the participants to develop their own strategies rather than being steered solely by the tutor. Lessons stick better when you’re reviewing your own rides and those of your peers rather than simply being told what to do. Focusing on the positive keeps participants upbeat and engaged.

By the end of the day’s course, each participant had led a short stretch of the ride and dealt with at least one scenario themselves. They had learned how to match up routes to riders, what the participants of their rides might want to achieve, and how to create a series of rides with a progressive theme to them. But above all, everyone had fun and developed their own knowledge and style of leadership.

Cycling UK’s Club Leader course is aimed at regular club riders with some experience of leading rides. It costs £135, or £122 for Cycling UK members.

It all went swimmingly

Two of the triathlete participants give their feedback.

We had a wide range of characters on our course, from professors to military personnel to business people. We also had decades of cycling experience across a wide spectrum: social, short and long distance, racers and triathletes.

All were here to learn the nuances of leading club rides, ranging from social rides to training rides.

After we had compared experiences (and horror stories!), the day progressed with the classroom basics of leading a good, safe and fun ride with lots of banter, counter opinions – and solid advice from the course tutors.

The practical session rolled around. Safety checked and wrapped up against the cold, we moved off in our groups, ready for a couple of short circuits of the local route we’d planned earlier with maps – part of the ‘good preparation’ ethos drummed into us.

The road section was great fun, both analysing how we all reacted to scenarios and looking at how differently people performed essentially the same leader responsibilities.

It was a club ride from hell, with hill breakaways, chains off, cyclists ‘knocked off by cars’, people getting lost, cyclists getting dropped all in the name of testing our common sense.

We learnt that you don’t always have to lead from the front; indeed sometimes it’s impossible. I learnt that the best led ride for me is one where it feels social and it’s not even really apparent who is leading, it all just flows. 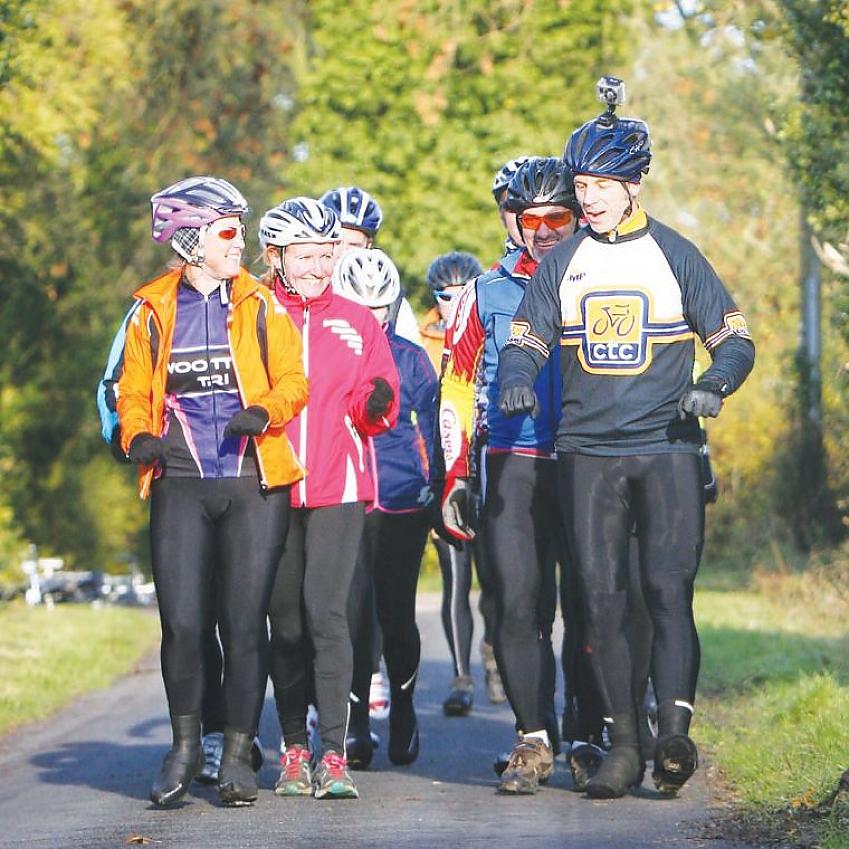 This course was extremely useful, even to experienced triathlon coaches. It really helped me appreciate the value of thorough preparation so that the cyclists I take out have an enjoyable, safe ride whatever the weather!

The course made me think of the value of route planning, building in a nutrition stop, and fully planning alternative routes if the unexpected arises. It also taught us the value of taking people of all abilities for rides, and the appropriate planning for each level.

This was a truly inclusive course with a genuine focus on getting people out on their bikes whatever their ability.

Tour leader course: Get paid to ride your bike View

How to: cycle in a group View