Neil, Amy and Alice Hammond took a series of trains from Inverness to the Massif Central in France, then headed south on a Pino tandem and a Dawes tourer

Touring with a child is straightforward when they’re small enough for a trailer. At the age of six, our daughter Alice had outgrown hers and wasn’t ready to tour on a solo bike. So we bought a Hase Pino, a semi-recumbent tandem. Its frame separates, and once dismantled it fits into one of the lightweight nylon bags that I had made for transporting our regular bikes on French trains.

Arriving into Euston, we walked along to St Pancreas and to Eurostar Dispatch. Their information page stated that any bike up to 2m long could be accommodated. The Pino is exactly 2m fully assembled, but looks very unusual for a bike. The staff at St Pancreas were completely unfazed, however, and cheerfully took the Pino for delivery to Paris.

We intercepted the bikes as they came off the train at Gare du Nord, then cycled across Paris. Our destination for the end of the day was Clermont Ferrand, which meant getting a train from Paris Bercy, an unremarkable station behind Gare de Lyon. The trains heading south from here have the distinct advantage over TGVs of spacious bicycle compartments, which can be booked in advance along with your ticket.

Shelter from the rain

We stayed in a hotel opposite the station in Clermont Ferrand. Next morning, we were ready to start our journey in sunny France. Except it wasn’t; it was raining and colder than Scotland.

We set off with the vague intention of getting to Le Mont-Dore – vague because I wasn’t sure how fast progress would be on a loaded Pino. South from Clermont Ferrand, everything is uphill. Not only was the terrain challenging but the light rain became heavier and the wind picked up. While Alice was stoic – she lives on the west coast of Scotland, after all – I deployed the fabric Pino fairing to offer her some protection. It worked a treat and likely saved the holiday.

After over four hours of cycling and 1,100 metres of climbing, we had covered just 50km and were wet and cold. All thoughts of camping vaporised. We found a pleasant hotel in Orcival and checked in.

This first day’s weather set the tone for the next three days as we headed through the Massif Central. Low cloud meant that although my legs told me we were going uphill, there were no views of the famous peaks or lush valleys to compensate for the effort. We managed a couple of nights in the tent, but the fourth day of our journey was torrential so we bailed out into a hotel.

The next morning, I peered out of the hotel window and was greeted by blue sky and sun. What a relief! With spirits lifted, we set off through lush green pastures towards the Col de Serre (1,355m). For a change I had drops of sweat dripping off my nose instead of rain on the steep climb up the Col.

With renewed enthusiasm, we decided to make an attempt on the Pas de Peyrol (1,588m) to get a view of Puy Mary and perhaps take a short walk to the summit. The road up had a reasonable incline for a while but then had a short but very steep 18-20% section leading up to the summit. I urged my young stoker to pedal as hard as she could and together we managed to keep going all the way to the top. Her reward was a round of applause from the assembled crowds and a large ice cream; mine was a cold beer. The Pino attracted a lot of attention. Everywhere we stopped, small groups would gather, take pictures and ask questions.

Just down from the summit, we passed a bothy created from an old ‘buron’, a cheese-making building. It turned out that we could camp there for the night, high up in the mountains. We had the whole place to ourselves. The next morning we awoke to sun on the tent and loitered over tea and breakfast, enjoying a moment of tranquillity and some breathtaking views across the Massif Central. We packed up the bikes and continued our journey, leaving the high peaks and heading towards Murat.

For the first time on the holiday, we sat in the shade to eat our lunch as the temperature had begun to creep upwards. In the early afternoon, we were grinding up the Port de Bouc (1,380m) with little or no shade. The recumbent position on the front of the Pino and the fact that we were heading south meant that Alice was very exposed to the sun. Once again the fairing saved the day, this time as a sun shield. 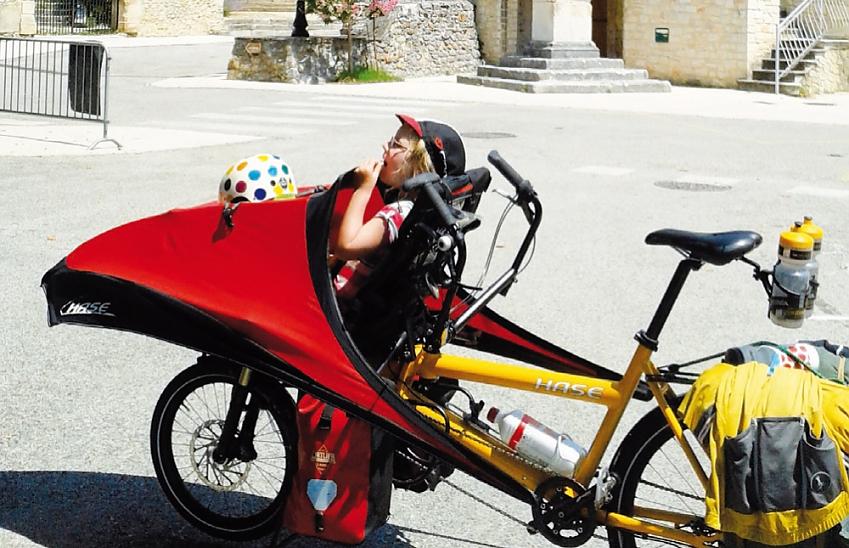 We carried on over the Prat de Bouc (1,380m), down the other side, and then up the Col de la Griffoul (1,350m) before a long and enjoyable descent. The Pino is very stable on fast downhills and its hydraulic disc brakes are impressive. Our day ended in Pierrefort.

Over the next few days, we continued southwards. The weather was very hot now, well into the thirties in the afternoons. We tried to pack up and leave the campsites early, but it didn’t always happen; play parks, local markets and tempting cafés often caused distraction and delay. All too frequently, we ended up cycling in the heat of the afternoon.

I was able to chat with Alice as we went along, something I couldn't do when she was behind me in the trailer."

The Pino was hard work in this terrain. On flat sections, which were scarce in the Massif Central, I could maintain a reasonable speed. On the climbs, I shifted rapidly down through the gears. It was slow going, and it was also a very alien riding position for me; I am used to drop bars. Plus, it’s heavy itself and we were transporting a lot of weight. Yet we made reasonable progress, and I was able to chat with Alice as we went along, something I couldn’t do when she was behind me in the Chariot trailer.

We had a day off after pitching up at a lovely ‘Camping à la Ferme’ in Soulages Bonneval. That night a wind sprang up, heralding a change in the weather and bringing a few spots of rain. Halfway up the road to Aubrac the next day, it became a howling headwind. We didn’t linger on the plateau. A backpacker assured us that a thunderstorm was coming.

We took the road towards St Geniez-d’Olt, a descent of epic proportions. We descended 900 metres and covered 25km in no time at all. We found a pleasant campsite by the river in Ste-Eulalie-d’Olt. The predicted thunderstorm arrived, treating us to an illuminating if rather sleepless night.

The next part of the journey was along gentler terrain beside the River Lot. After the rain, the temperature had fallen. It was pleasant following the Lot, until we ran out of quiet roads and ended up on a busy main road heading for Mende. We diverted onto a series of small roads to take us over the Col de la Loubière (1,181m) and into the Cévennes. We continued on over the Col des Tribes (1,130m) before a long descent to Villefort and then on to Bessèges.

We were back in the lowlands and in wine country, quite a contrast from the Massif Central. The temperature had shot back up into the mid-thirties. From here, we had two days to get to Avignon to catch the train home.

At Avignon Centre Ville station, I dismantled the bikes in the heat and, unable to find a trolley, lugged them up to the platform. There was plenty of room for luggage on the train and it was a quick and pleasant journey. Arriving directly into St Pancras without having to transit across Paris was a big bonus. Amy alighted swiftly and grabbed a trolley – relief all round.

This was first published in the October/November 2015 edition of Cycling UK's Cycle magazine.

Camping, although a couple of nights in hotels at the beginning and the end and when we were very wet.

I’m glad we had

A cover for the Pino. It was expensive and quite bulky to carry but saved Alice from the torrential rain and then worked well as sun shield.

Next time I would

Make a new slightly larger bag for the Pino and work out a way it could be wheeled in the bag. Take a pair of overtrousers for Alice.