You can’t miss Mont Ventoux. Drive or take the train down the Rhône Valley, and there it is, on your left, perhaps 40 miles away, rising out of the plains as if it were the only mountain in the world. From almost any part of Provence, just look up: with its bare limestone peak that looks like the surface of the moon, it’s impressive to any viewer. To a cyclist, it means even more. The most fabled of all the climbs in the Tour de France, races and even lives have been lost on it: the Giant of Provence.

I went, for the seventh time, in May. I met some other British cyclists in the baggage hall of Marseille airport. There was only one question: who was going to ride up Ventoux? We were already nervous at the prospect.

It has a particular place in the hearts of British cyclists, because it was here in 1967, only about half a mile from the top, that Tom Simpson died in the Tour de France. He fell off his bike from exhaustion, insisted on being put back on, and collapsed again a short while later. Three years later, Eddy Merckx was so overcome after his stage win there that he was given oxygen.

In 2013, Chris Froome won on Ventoux on the way to his first Tour de France win. Two years ago, Froome found himself without a bike after a crash and continued on foot… The Tour didn’t visit Mont Ventoux this year, but has done three times in the last decade.

A mountain to climb

I wasn’t planning on winning any races on my visit, and certainly not riding myself into trouble. The reason I keep going back is simple: it’s a great ride for the reasonably fit, and the whole area has some of the best cycling I’ll ever find.

The first time I rode up Mont Ventoux, in 2000, it was easier than I had imagined, at least for a while. It was the most northerly point of a week-long tour of Provence, so I stayed an extra night in a town at the bottom, and rode up with just one small pannier on my Roberts Roughstuff not-so-lightweight tourer.

About three-quarters of the way up, I was starting to think these professional cyclists were not as tough as they make out. It was almost easy. The road emerged from the trees and passed a café, the Chalet Reynard. I could see the tower at the top of the mountain, less than four miles away. I was feeling so good, I thought I could even pick the pace up for these last few miles. There was a rider struggling about 200 yards ahead. "I’ll have him," I thought. That was the last I saw of him.

As I came out of the trees, into the bare, windswept landscape that Ventoux is so well known for, the temperature went up 10°C, the gradient became harder, the wind picked up, and I learned an important lesson about cycling up a mountain: don’t even think about attacking it. By the time I got to the top, far from overtaking anyone, I could barely push the bike, let alone ride it. I’d stopped countless times in those last few miles, drunk all my water and eaten all my food.

There’s a memorial to Simpson near the top, and from that point I virtually crawled to the summit. I realise there are steeper climbs, and there are longer climbs, but there are few as tough as Ventoux. 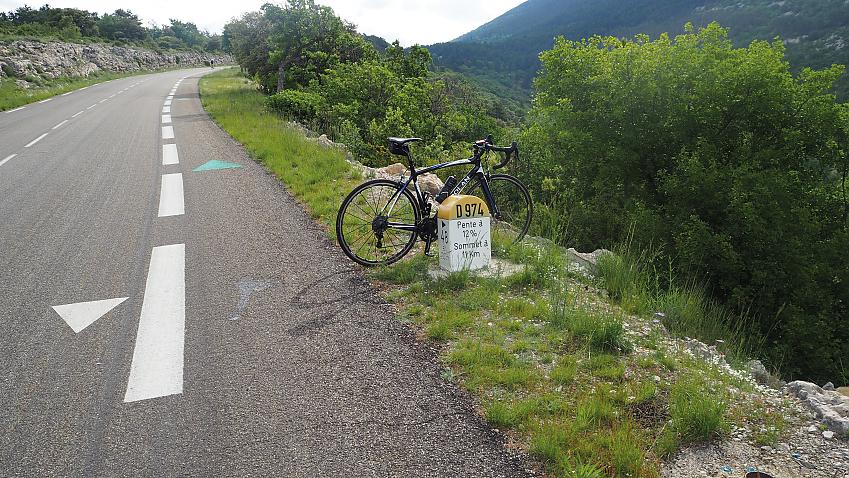 Last year, a group of three Dutch riders overtook me. I could sense they were going too fast, and a few minutes later, I heard the sound of retching a little way up the road. When I got to that point, the cyclists were gone, but there was a telltale pool of watery liquid in the road.

A little further up, one of them was slumped over a crash barrier, trying to force a gel into his mouth. His bike was discarded on the ground. I asked him if he was all right. He gave me a limp smile and the thumbs-up, so I carried on.

Craig Entwhistle, who runs bike-specific accommodation called Veloventoux in nearby Façon, said: ‘Once, I was driving up the mountain, and on one of the steepest sections I saw a man lying in the road, his bike by his side. I thought this was it: you hear of people dying trying to climb Ventoux, and after 15 years living here, I had finally seen it. I got out of the van and looked at him. He wasn’t moving. His arms were above his head; it didn’t look good. But suddenly, and this frightened the life out of me, he jumped off the ground and stood to attention. I jumped nearly as high. He had a look around, took it all in, and then tried to get back on his bike. He ignored me.

I told him to take it easy, that I’d put the bike in the van, we’d go down to the bottom, get a cup of coffee, and then he could decide what he wanted to do. “I’m going to get to the top even if it kills me!” he said in a Scottish accent as he climbed back on his bike, pushing me away. I thought he might be right – but he did eventually get there, I think. I didn’t hear otherwise."

The big challenge on Ventoux is to do all three ascents on the same day!

Rides in the region

Ventoux itself is the challenge that draws cyclists to the area, but if you do only that, you are missing out. You can’t get a decent view of the mountain when you are on it, and the whole area of northern Provence has endless quiet roads of tough but rewarding cycling.

A road clings to the side of the sensational 22km Gorge de la Nesque, south of Ventoux, where short tunnels mean trucks and large vehicles cannot use the road. I usually ride down the gorge rather than up it to give me time to appreciate the scenery.

Les Gorges de Trente-Pas, 25 miles north of Malaucène, is equally stunning, and at least the road runs along the valley bottom. The Dentelles de Montmirail, in the shadow of Ventoux, lives up to their name – the sharp peaks really do look like teeth.

While Ventoux and the surrounding area is a mecca for the ever-increasing number of Lycra-clad sportive riders, many from Britain, plenty do it in their own way. There are three main ascents, from the villages of Bédoin, Malaucène and Sault. The Tour de France always goes up from Bédoin, probably the hardest of the three, although Malaucène is tough enough to make little difference. You’ll see mountain bikers – there is also a fourth, lesser known off-road route to the top – and Ventoux has been climbed on a unicycle and on a Boris Bike.

On my first ascent of Ventoux, the perfect holiday for me was loading up my bike and heading for the hills, a different place to stay every night. And while I still love to do that, there is an easier option: a fixed-base tour. These days, I don’t take the Roberts (16kg, not including my lunch). I either rent or take my own carbon fibre road bike (Dolan L’Etape, 9kg, plus a banana if I am lucky).

That has some big advantages over point-to-point touring. You don’t have to carry all your gear with you and you don’t have to worry about that evening’s accommodation. Or if those black clouds do mean rain…

There is plenty of cycle-friendly accommodation near Ventoux, and enough loop rides to keep you busy for a week or more without going up the big one. The big challenge on Ventoux is to do all three ascents on the same day. If you do this, and you pay the 30 Euro fee, you are entitled to join the Club des Cinglés du Mont Ventoux – the madmen’s club. Almost 13,000 have done this, and British riders are the third largest group, after Dutch and French, with more than 2,000 riders.

Plus there’s a few of us who have done it without signing up to join the club. It took me 13 hours. Including an extra 11 miles to and from my accommodation, it was 100 miles, with 4,400 metres of climbing. Was it the hardest thing I have ever done on a bike? Not even close.

I was lucky enough to do the three ascents in perfect conditions, not too hot on the way up and not too cold on the way down. I didn’t have to look at a map, food and drink were plentiful, and after every ascent I had a long descent and a rest at the bottom before starting the next one.

Tough, yes, but for my hardest days on a bike, I think back to touring. That day on the Isle of Skye where I stopped in a bus shelter, took my socks off, rung them out, and put them back on. Or the time in the Pyrenees where I finished a long day exhausted, only to find the hotel I was looking for was just a restaurant, and closed anyway, and the accommodation was another 30 miles away, all of it uphill. Or the day in Shropshire where I had to ride 10 miles on a rim, having trashed the front tyre.

Unforgettable experiences, but doing a fixed-base tour somewhere like the Ventoux, you can keep the good parts and dispose of the bad. Some of them, anyway. 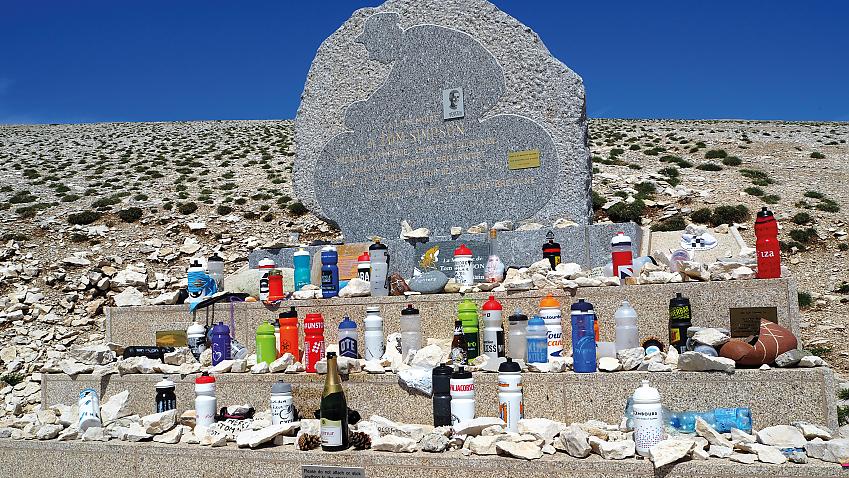 I flew to Marseille where I was picked up by Veloventoux. There are flights from all over the UK to Marseille, Avignon and Nîmes, then it’s a transfer to your hotel by taxi – or car hire.

In France, taking a bike on a train is more complicated than it should be. It is possible, via Eurostar and TGV to Avignon, followed by a local train to Orange, 23 miles from Malaucène.

The TGV takes only boxed or bagged bikes on this route. Another option is the European Bike Express to Orange. Driving from Calais will take more than eight hours. Cycling there and back will take at least a couple of weeks. Quality bike hire is available in Malaucène, Bédoin and Sault.

ROUTE: Bédoin is the toughest, starting at 4%, kicking up to a sixmile stretch at close to 10%, but easing off after Chalet Reynard for the final 3.75 miles. Malaucène has a two-mile section halfway of 11-12%, the steepest on the mountain, but also sections of 5% and 6%. Sault is less steep. Sault and Bédoin routes merge at Chalet Reynard.

ACCOMMODATION: Part of the reason I keep going back is Veloventoux (veloventoux.com), set up entirely for cyclists and run by an English family at Façon, six miles from Malaucène. BIKE: Dolan l’Etape with Campagnolo Potenza, smallest gear 34/32.

I’M GLAD I HAD: Arm warmers, rain jacket, gloves. Weather is a huge factor. Winds can blow cars off the road, and descending a cold mountain in wet gear can cause hypothermia.

NEXT TIME I WOULD… Take less water. There are free fountains in all the villages at the bottom, and a free tap at Chalet Reynard.

Great Rides: Lofoten Islands in Norway View
Cycling UK continues to support the UK to cycle
This remains true during this difficult period with the ongoing threat of coronavirus Covid-19
Read our latest advice on cycling
Join Cycling UK to help us change lives and communities through cycling
Membership gives you peace of mind insurance, discounts in cycle shops, rides & routes
Join now