Early Sunday morning in April: I’m in a nondescript village standing by the roadside with hundreds of locals drinking lager or espresso. There is mist overhead, no traffic, and an air of expectation.

The crowd isn’t the usual lycra-clad huddle who turn up for Sunday-morning races. They’re not ‘cyclists’ but ‘cycling fans’ and today is their Grand National, their Wimbledon final, and their Superbowl rolled into one.

For this is Belgium, more specifically the Flanders region, and this is the Ronde Van Vlaanderen, otherwise known as the Tour of Flanders.

If cycling is a religion in Belgium, the Ronde Van Vlaanderen (RVV) weekend is their cathedral. Along with another 16,000 sportive riders, I’m here to take communion.

The weekend offers the chance to indulge in the best of Belgium: beer, bikes and ’bergs. Sunday is a chance to watch the professional riders in the men’s and women’s races. On Saturday, however, it’s our turn…

We would get to ride in the wheel tracks of our cycling heroes, household names to every Flandrian, such as Eddy Merckx, Johan Museeuw and Tom Boonen; Belgian riders having won 69 of the 103 editions.

The race base in Oudenaarde is accessible for a weekend break by ferry or Eurotunnel from the south of England.

As we arrived to collect our numbers, the event village was lively. There was a pan-European cast of cyclists: French, Spanish, and Italians looking bronzed and fit. The Brits, in summer cycling kit, were easy to spot. Even with 16,000 riders, the logistics were smooth: ‘race’ number, maps, and souvenir T-shirt were swiftly collected, with enough time for free bike checks or last-minute kit purchases. I added a name tag to my frame and my signature to a large sign on wall – just like the pros! 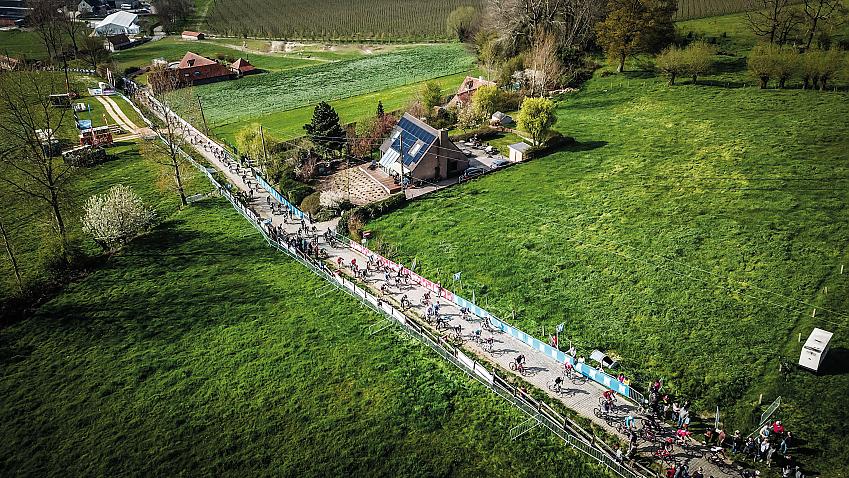 Narrow, cobbled farm tracks are the heart of the ride.

Half our group of ten UK riders opted for the full 229km route beginning in Antwerp, but the idea of an earlier start and 100km or so of flat riding before the first of the climbs didn’t appeal to me. It might be what the professional teams would face, but I’d really come to sample the famous climbs.

With a two-hour starting window for the 74km route, there was no need for the staggered start of some sportives. It was straight through the start arch and onto a canal cyclepath to join the route, a laissez faire attitude that was to continue for the whole ride.

The course meandered along quiet country lanes, with road junctions well marshalled by volunteers holding back traffic. Unlike the longer routes, the shorter option tends to be ridden by leisurely, chatting groups rather than by large pelotons of serious amateurs emulating the pros.

The steepness came as a shock. Riders stopping ahead forced me to put a foot down… A remount was impossible

After just 14km, the infamous cobbles began. At 500 metres long, the Kemmelberg lulls you into false security: it is a narrow, steep, cobbled track where the gradient reaches 22%. Having ridden the cobbles of Roubaix, I was confident of my bike handling but the steepness was a shock.

Riders stopping ahead forced me to put a foot down, and a remount was all but impossible due to the incline and slippery cobbles. So I did the cleat-clacking walk of shame up the hill. Lesson learned: create space around yourself.

The next section of cobbles was flat – the 1km long Maria Borrestraat – but still very different from anything in my native Surrey Hills. Then it was the Steenbeekdries and Taaienberg: 6.7% and 16% gradients, respectively, with big grout-free gaps between the stone setts.

These were the very cobbles that knocked Tom Boonen’s chain off in 2017, robbing him of the chance to make history with a record fourth win. No such problems for me! Over the asphalt-surfaced Kanarieberg, there was then a rolling 10km ride to the feed zone in Ronse, where a weird counterpoint of techno music and Neil Diamond was blasting out, Sweet Caroline mingling with a booming bass.

The hardest kilometres were to come. Not so much the 1.8km Kruisberg, the second longest cobbled climb on the RVV; it's ‘only' 9%, so not too steep. And we were encouraged up it by cheering, beer-drinking locals.

The Karnemelkbeekstraat – I couldn’t pronounce it either – is also not too bad as it's devoid of cobbles. The last two climbs were what I’d really come for: the Oude Kwaremont and the Paterberg. For the professionals, they’re invariably decisive because they're tackled three times. The 11% Kwaremont was my favourite: 2km long and surrounded by bannered barriers, beer tents, and flags of every nation. It was the real deal.

I bashed along at a steady pace and even managed a smile for the camera. As ever, line choice was crucial: not all cobbles are equal and the ruts can drag you off in a tangential direction. The Paterberg 6km later was the real killer: just 400m long but at 20% it felt like a wall. After a foolhardy sprint at the base of the climb, a combination of fading momentum and a crowd of walking cyclists forced me to dismount. I’m not sure my fitness would have got me over the top even if I had mastered the trackstands and weaving the serious amateurs were employing.

I rode the last 15km to the finish at a rather more modest pace than the pros would race it the next day, as they forlornly chased down the solo breakaway of men's winner Alberto Bettiol.

The final part of the route was adorned with Lion of Flanders flags all the way to the finish. Down the final straight, you’re counted down by the banners: 500m, 250m… I held my arms aloft in triumph and didn’t drop them again until I reached for a beer in the café bar in the market square in Oudenaarde, where pubs were decorated in cycling paraphernalia – and where I met a man who said he owned Eddy Merckx’s original Peugeot team car. Whatever you say, mate! 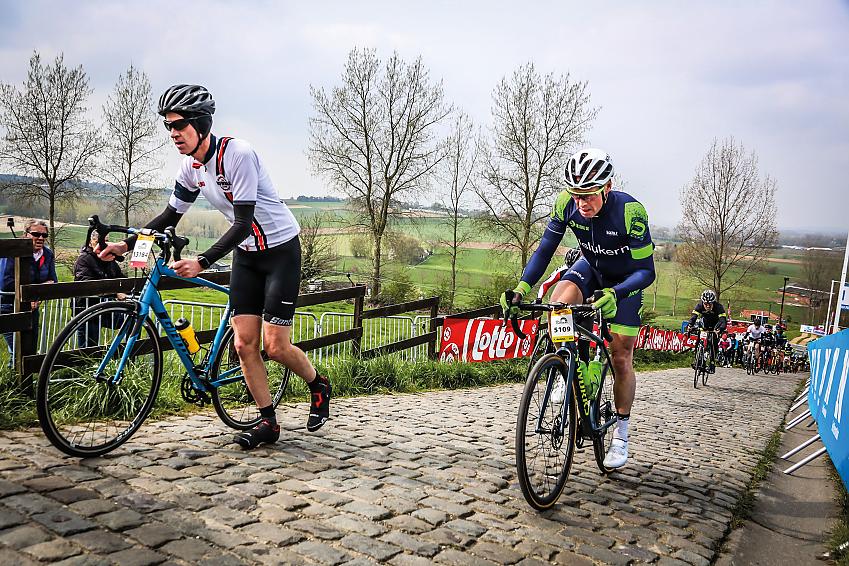 Next day, the crowd in the village doubled as those savvy enough to be following the race live on television in bars or houses decamped to the square.

The thwump-thwump-thwump of a TV helicopter signalled the approach of the race, followed by the klaxon of motorbike escorts.

From the race leader’s team car came undecipherable shouting. The crowd was clapping, cheering. And was that the peel of cowbells or the jangle of empty beer bottles rolling on cobbles? Mobile phones were held in the air to capture the action.

In a wave of clattering wheels and clicking gears, riders appeared and swooshed around the corner. Was that it? Not quite: that was the 157km women’s race, which preceded the men’s and would be won by Italy’s Marta Bastianelli.

Positions were re-primed for the men’s version. The breakaway riders raced through, followed by a peloton that, at this point, was still sizable. The race wouldn’t be decided until the repeated ascents of the Oude Kwaremont and Paterberg, which I’d walked the day before. With the peloton having passed, we settled in with beer and artisan sausages to watch the race on a big screen in the village.

Allez, Bettiol! After 48 hours in Belgium, I’d got the Flanders fix I'd come for. Farewell then, Ronde Van Vlaanderen. See you again!

Route: The 74km is circular route that emulates the final kilometres of the professional Ronde Van Vlaanderen road race. The rolling countryside features ten of the legendary cobbled climbs, such as the Koppenberg, Taaienberg, Oude Kwaremont and Paterberg.

Entry fee: 30 Euros Conditions: Cold and misty to start with, sunny and breeze-free in the afternoon.

Navigation: It’s waymarked. The routes are available online as gpx files and can be ridden outside of the sportive.

Glad I had: Mavic Ksyrium tubeless wheelset, padded mitts, and double-wrapped bar tape for the cobbles.

Next time I would: Spend more time in Oudenaarde – especially on the Saturday afternoon.

RVV is one of the Belgium cobbled classics that pepper March and April, such as E3, GentWevelgem, and Paris-Roubaix.

All offer amateurs an opportunity to see and ride the same routes as the pros and are easily accessible for a weekend getaway from the UK.

Race bikes or gravel bikes are best suited. RVV and Roubaix make up two of the five ‘monuments’ – the five hardest classic bike races. So if matching the pros is your game, then you might like to pick off the other three: the Italian Milan-San Remo in March; the Belgium Ardennes Liège-BastogneLiège in late April; and the Giro Il Lombardia in October.

Next year's RVV will take place on 4 April. For more details on both that and this year's event: werideflanders.com

Beginners tips for riding on cobbles

1. Bike: Use lower pressure, wider tyres than on road – 28mm at least.

2. Road position: Ride in a straight line on the crown of the road, or wherever the surface is smoothest.

4. Pedalling: Power down harder on the pedals than usual so your bike glides easier over the cobble surfaces.

5. Relax: Grip the handlebars firmly but don’t tense your arms or upper body.

Cycle Magazine, June/ July 2019 View
Cycling UK continues to support the UK to cycle
This remains true during this difficult period with the ongoing threat of coronavirus Covid-19
Read our latest advice on cycling