Last summer, Jo Gibson and three companions circumnavigated the Mont Blanc massif by mountain bike. There were ups and downs…

"We’re riding the Tour du Mont Blanc" I told the table of mountain bikers over lunch with our skills instructor. "It’s a 120-mile loop around the Mont Blanc massif, mainly used by walkers, covering three countries and ascending over 30,000ft. And it’ll be unsupported."

The response wasn’t the kudos I had hoped for. The instructor asked: "What emergency precautions have you got in place?"

Two months later, cloud cloaked the peaks above Chamonix, leaving all but the dirty tongue of the Glacier des Bossons to our imaginations. Dave, Richard, Darryl and I were ready to start our journey. Our packs were heavy, loaded with a library of maps, a battery pack, a well-stocked first aid kit, emergency bivvy bags and storm shelters, plus the essentials for five days of riding in the Alps. The suspension sank as I sat on my bike. I could feel the weight of the journey ahead. 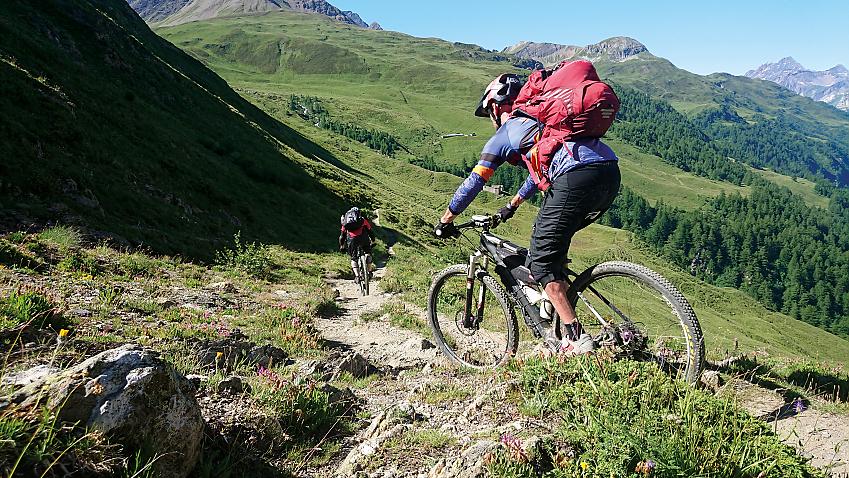 Five daily stages included up to 7,000ft of climbing each day

The Tour Du Mont Blanc (TMB) is one of the most popular long-distance walks in Europe. It can be traced back to the 1700s, when the fascination with all things Alpine was just beginning. Now around 10,000 people walk the valleys and cols each summer. Mountain bikers tackle it too, some following the route faithfully, others doing it with tour companies who have tweaked the route to give customers more downhill bang for their buck.

We based our route on internet research, Strava heatmaps, and the availability of refuge accommodation. Chopped into five daily stages of at most 32 miles, it seemed we would be done by lunchtime. Yet with up to 7,000ft of climbing each day, we had no idea how long we’d be riding.

We set off, climbing into the mist that shrouded the Col du Balme. Walkers were ghostly figures in the gloom below. I was grateful for the two ski lifts we used, which cut 2,000ft from what would have been an 8,000ft day. Shivering at the top, we followed the track that would take us across the col,
in search of the descent into Switzerland.

Rocky switchbacks straightened into a strip of singletrack. We avoided rocks and hikers, while flexing fingers chilled by the damp mountain air. Then we entered a swathe of trees, negotiating steep zigzags into the Vallée du Trient. Our cold fingers were forgotten. It was technical, natural riding that went on and on. Every so often we paused, smiling, at the side of the trail, waiting for disc rotors and thighs to cool. This was what we were here for.

But what goes down has to go up. On the Alp Bovine (2,091m), Darryl was soon fed up. ‘I’m braking uphill. Uphill, I tell you!’ Braced against the bike, using it like a Zimmer frame to aid his ascent, he was climbing inch by inch. We were all struggling. The Korean walking party we encountered were fascinated. They took photos. ‘How old are you?’ one man asked Darryl, staring into his flushed face. 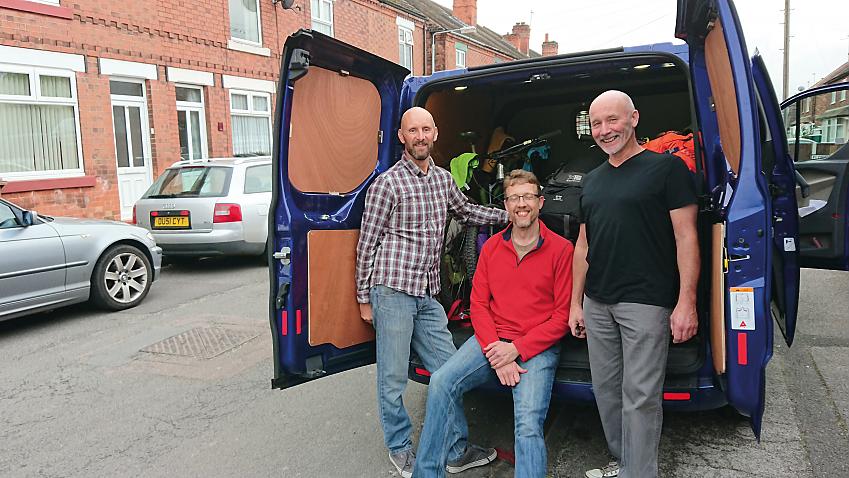 Ready to set off to Chanoix

The climb drove home the ups and downs of the Alps. For every thrilling descent, there would be a corresponding, tortuous ascent. Was it ridiculous dragging a bike up such steep terrain? The pitying looks of the walkers suggested it was. "Not long to go," they said. I carried on with small deliberate steps, bike balanced on my shoulders.

We reached the foggy summit along with the Korean party. No way were we getting tangled with them on the way down! Without drawing breath, we scrambled onto the bikes and, yodelling into the gloom, disappeared down the miles of Swiss mountain path below.

On day two, in the sleepy hamlet of Champex d’en Haut, the sun rose with us. It turned the lake to polished glass and lit up the velvet green mountain sides of Val Ferret. From the valley floor, we began an upwards meander through a pastoral Switzerland. We passed wooden houses and hay barns, tracing the banks of the Prayon and stopping to gawp at the great glacial amphitheatre at La Fouly.

Over lunch in the Hotel du Col de Fenêtre garden, a gentle breeze carried the ding of cow bells, a murmur of conversation from the Swiss couple at the next table, and the scent of the dapper old man’s cigar.

An hour later, we were slogging across a moonscape mountain side towards the summit of the Grand Col Ferret (2,537m). Below us, on the balcony of the Alpage de la Peule, a rainbow of t-shirts fluttered above the Swiss Val Ferret. Walkers scurried on the flagstones, tending their belongings and settling in for the evening. I longed to do the same, only our beds were in the next valley, over the Swiss/Italian border. We kept pushing.

"We can go down this road all the way to Courmayeur," Dave said over breakfast, tracing the day’s route on the map. ‘It cuts out all of the climbing this morning, then we just have the afternoon.’

Silence. While we had over 7,000ft of climbing ahead, we were all mountain bikers and were uncomfortable taking the road option.

‘What about taking a ski lift at Courmayeur, then?’ Dave asked. It was a good compromise. We agreed to attempt the morning’s climb. 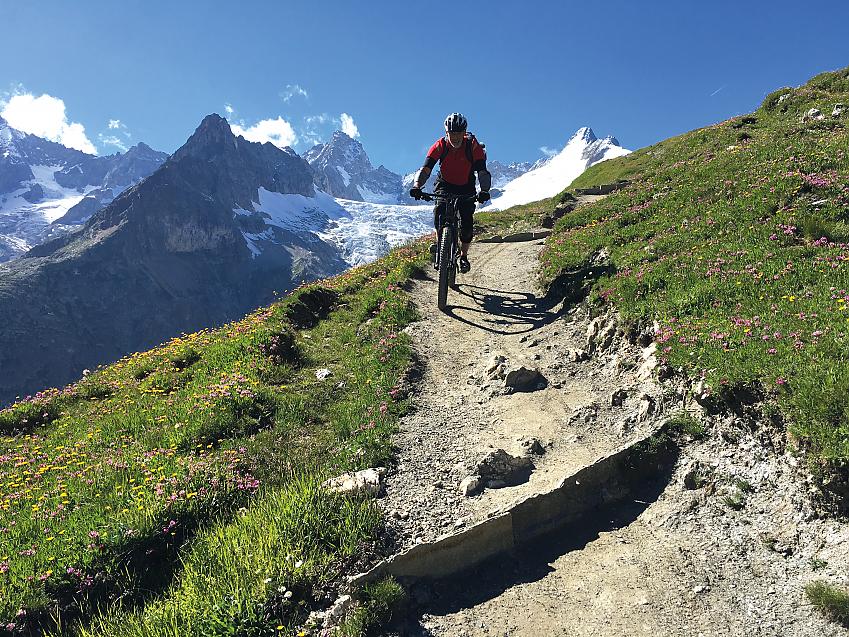 It was steep singletrack. Greenery, heavy with dew, brushed our legs as we hugged the sides of the trail to let sympathetic walkers pass. Then we reached a long traverse across Alpine meadows and the tables turned. The walkers stepped politely aside as the trail swept us along, letting us pump the hard undulations for speed. Under a blue sky, with views of the Grandes Jorasses range across the valley, this was Alpine riding at its finest.

The Mont de la Saxe was covered with hikers and tourists when we arrived, many stretched out on the grass beneath the blazing sun. We snapped photos of Courmayeur below, then began our descent. It was a sketchy toboggan run of sharp rock, loose gravel, and steep switchbacks booby-trapped with a slate drainage barrier on each apex. It was exhilarating.

Down in Courmayeur, at the Piazza Abbé Henry, where the tourists tilt their cameras at the white-washed church, we scanned the skyline. Nothing moved save the odd cloud chugging through the valley. There would be
no help up the mountain; the ski lifts were still. Our hearts sank. It was already past midday.

"We could take the road round," Dave offered, as we forked up olives, walnuts and tomatoes at a bar. There was that silence again. The guidebook suggested the 5,000ft ascent would take five hours. It was already 2pm. This would be tight.

We halted, panting beneath a rare stretch of shade on the steep dirt track. Darryl examined the sole of one of his clipless shoes. ‘Heel’s gone,’ he muttered. I said a prayer to the manufacturer of my rubber-soled flat shoes.

It was a hard slog in the hot sun. We walked through two ski lift stations, passed three refuges – grabbing ice cream and Coca-Cola as we went – and continued up above the tree line. My head was down when I heard Richard announce "That’s it, I’m sure it is –
the mountain, Mont Blanc!"

I looked across the valley to what Richard was capturing on his mobile phone. There was one peak bigger than the rest, a wisp of cloud flying from the summit and a huge glacier sliding from its shoulders. I took my own photograph and plodded on. 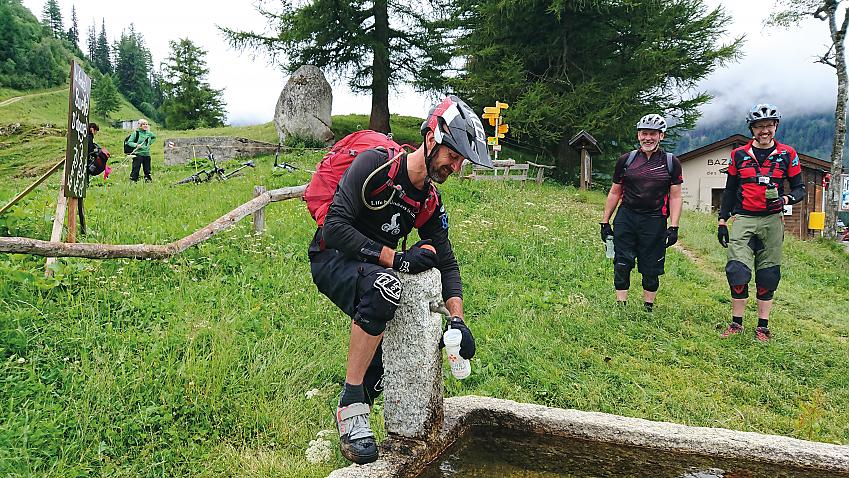 Filling water bottles along the route

The valley was grey when we reached Rifugio Elisabetta, stumbling into the second sitting of dinner that Richard had secured for us in a valiant energy-gel-fuelled final push up the last of the climb. Inside, it felt more like a Himalayan teahouse. At least 50 walkers sat side by side at long tables, different languages mingling, cutlery and crockery clattering.

Only Richard slept well that night. Rifugio Elisabetta lays its guests out like corpses on communal bunk beds, stacked three high. Some of the bunks, naturally, had snorers. At 5am, I got up after failing to rest. Darryl and Dave stared at me with hollow eyes over breakfast. Our fourth day, at 32 miles, would be our longest. I felt like the walking dead.

We had already agreed that we would take a detour from the TMB proper to avoid the famously unrideable Col du Bonhomme. This would involve some road miles, which we made our peace with; there would still be some tough ascents before the end of the day.

Dave seemed unfazed by the blazing heat and the miles we had to ride. As we pedalled from double-track onto the road to make the summit of the Cormet de Roselend, he latched onto the rear wheel of a passing road rider. As I pedalled steadily upwards, glancing back to Darryl, who was struggling from the day before, I could see Dave in the distance, huge red backpack bouncing as he gave chase. I shook my head, muttering ‘What’s the point?’

An hour later, we were seated beneath sun shades on the edge of the lake (Lac de Roselend), listening to cow bells, the heavy thrum of motorbike exhausts, and chatter. All about us were groups of roadies and motorcyclists. I felt like we belonged, and
the journey felt like a holiday again.

When we reached Chalet Refuge Nant Borrant, we took a moment on the steps, bikes abandoned beside us. Walkers were drinking and chatting. A neat, olive-skinned man weighed up Dave and Darryl’s bikes.

"You’re riding the TMB? On those?" He was talking about the modest amount of suspension travel on their cross-country
bikes; Dave was on a hardtail.

"Yes, we are," Dave said. The stranger nodded his approval.

On our final day in the shadow of the Mont Blanc massif, mountain civilisation was rarely far away. Stone and wooden buildings clustered on knuckles and plateaus, with carefully tended gardens and fields alongside. The Aiguille de Bionnassay loomed above us, its snow brilliant in the hot sun. Beneath, meadows of flowers bent gently in the breeze. Our accumulated tiredness couldn’t take anything away from the spectacular scenery.

We approached Chamonix on an undulating track beside the tumbling L’Arve, the mountain looming large above its lesser cousins. Chamonix was a different place to the one we left. Instead of fog, it was drenched in sunlight and vibrant with life. We got off our bikes to walk the Rue du Dr Paccard, mingling among the rich mix of its international population.

We’d done it – and we’d done it ourselves. To celebrate our success, we went in search of crêpes and beer.

From May to September, the accommodation in the area is plentiful but it’s best to book ahead. The nearest airport is Geneva. Car or train are also options. The biking routes are waymarked and the maps are adequate, but plotting the route on a GPS device is sensible. A good level of stamina is required for long days, and a reasonable level of technical ability to enjoy the descents. Riders get by on any bike, but a trail bike with a dropper seatpost would be my recommendation. Be prepared for mountain weather.

Route: We rode in the clockwise direction favoured by bikers.

Conditions: Fog followed by four days of bright sunshine. The route is a mixture of singletrack, double-track and quiet road. Many of the climbs require you to push or carry the bike.

I’m glad I had: Evoc backpack. Five Ten Freeriders for all the walking. Foil bivvy bags and emergency shelters.

Next time I would: Set off two weeks later, when the ski lift in Courmayeur runs. Take ear plugs.