Separable, full-size bikes can avoid air and rail transport restrictions if they fit in a suitcase. Richard Hallett tests a Ritchey Break-Away and a Surly Travellers Check.

As anyone who has recently tried it will know, travelling with a cycle on public transport can be hugely inconvenient. This is partly because a bicycle that’s not being ridden can be awkward and vulnerable, but more important are the regulations imposed by many rail carriers and airlines – and their costs. These can usually be minimised and even avoided entirely by opting for a folding bike. For those riders who prefer the performance of a full-sized machine, the cycles reviewed here use couplings that allow the frame to be split into two parts so the bike can be stowed in a smaller case than otherwise possible.

Couplings allow the frame to be split into two parts so the bike can be stowed in a smaller case.

Either bike on test, packed in a suitable case, can be carried on Eurostar and the TGV network. While UK rail operators limit the number of cycles allowed on a train, compact fully-folding bikes are counted as luggage, as are bikes partially dismantled and packed in a bag or case smaller than 90×70×30cm.

Airlines also impose restrictions on the size of items that can be carried without incurring excess baggage charges. The limit may be expressed simply as a single total figure, say 300cm, which is then the sum of length, width and depth, or as specific, individual measurements. A bike packed in a standard bike box invariably exceeds such restrictions; bike cases suitable for either of the bikes on test do not. They also hide the fact that a cycle is being carried, which can attract an excess charge even when the cycle is packed smaller than the permitted dimensions.

For obvious reasons, airlines state a maximum weight for checked baggage. Where this is high enough (20kg+), a separable cycle in a case may travel without incurring excess baggage fees – bearing in mind that a hard case will likely weigh over 7kg by itself. Also, your other belongings may be limited to what will fit in your hand luggage, depending on what else you can fit in the case with the bike.

If you ignore the delicate mechanism for splitting the frame – it’s easy to miss – this might be just another high-end 7kg carbonfibre road bike. Indeed, that’s exactly how it rides, which is hardly surprising given the classy component specification of: Shimano Dura-Ace 9000 mechanical 11-speed groupset; Ritchey’s own-brand SuperLogic stem, handlebar and finishing kit; and the US manufacturer’s WCS Apex Carbon 38mm wheels. These employ a wide, 38mm deep, ‘aero’ cross-section carbon clincher rim able to take tubeless tyres, although for this test the bike rolled on 25mm Ritchey WCS RaceSlick rubber.

The ride sensation is of directness and immense stiffness, the fork, beefy carbon stem and front wheel setup passing every road imperfection straight though to the hands even with the front tyre at a supple 85psi. The back end is slightly softer, perhaps thanks to curved seat stays and a slender 27.2mm seat post, but there’s no hint that the frame incorporates a split coupling as unobtrusive as Ritchey’s BreakAway system. 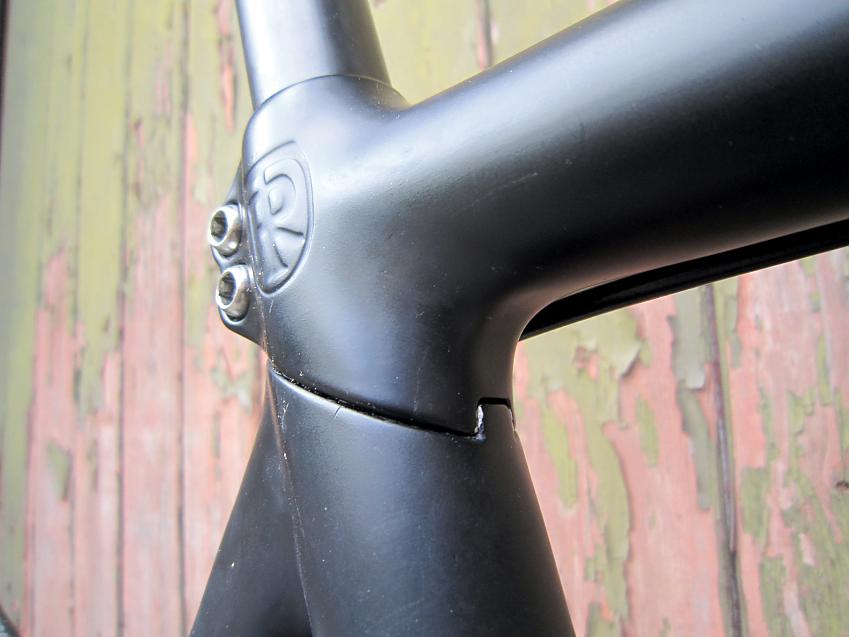 While the seat tube extends into the top tube lug, the backbone of the joint is the seatpost

Ritchey supplies Break-Away framesets only, complete with travel case (80×70×33cm). The Carbon frame is a development of the design pioneered on the original steel Break-Away, which employed a separate seatpost clamp on the seat and top tubes. The Carbon design uses a single (twin-bolt) clamp. The seat tube fits inside the top tube lug, which then clamps both the seat tube and seat post at the same time to make a rigid junction. The other frame split is at the down tube, just in front of the bottom bracket. Here, conical flanges on the open ends are pressed together by the angled inner faces of the ring clamp as it is tightened around them. Despite the lack of interlocking teeth or grooves in the  mating faces, the result is satisfyingly rigid – enough so, in fact, for the design to work perfectly well for company founder Tom Ritchey’s own travel tandem.

The result is satisfyingly rigid – enough so, in fact, for the design to work perfectly well for company founder Tom Ritchey’s own travel tandem

Assembly and break-down are straightforward. As the seat and top tubes slide together, they help locate the ends of the down tube. The hinged clamp is easily slipped into place and is tightened using a regular 4mm Allen key. The three control cables have threaded connectors and are quickly joined or parted.

The cycle fits neatly inside Ritchey’s carrying case, which is supplied complete with protective sleeves. It has small wheels on one corner and doesn’t look like a cycle case once zipped up. It’s worth noting that the frameset is good enough to stand comparison with regular carbon-fibre competition without taking its portability into account. There’s a small weight penalty of perhaps 500g, but for anyone in the market for such a machine and even thinking of travelling abroad for sportives and training camps, it’s an appealing option. 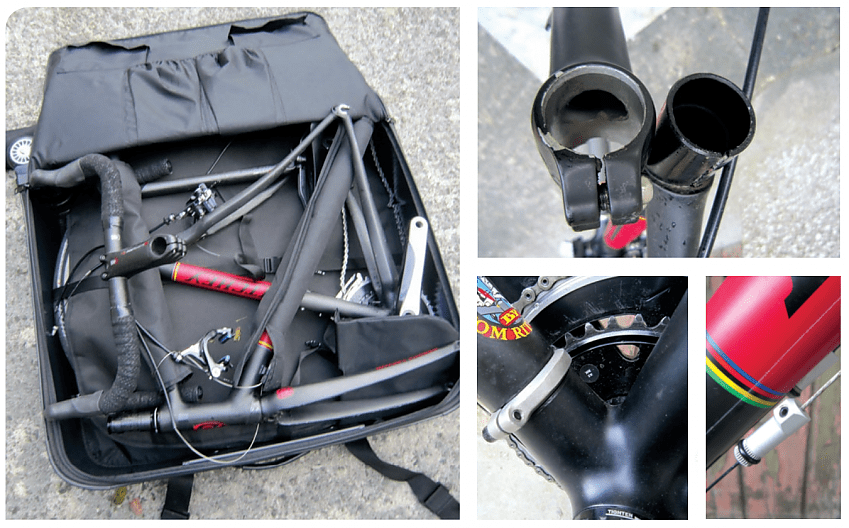 A development of Surly’s Cross-Check, the Travellers Check is sold as a frameset only and is available to special order. It splits using the proven S&S coupling system, which is practically the industry standard for suitcase bikes. The couplings, in stainless steel when used on steel frames, are installed by the frame builder. They can also be retro-fitted to an existing frame, given certain provisos.

Once installed, the frame is, if anything, stronger than it would be without them since the toothed interface provides greater bending and torsional strength and stiffness than a thin-wall tube itself. A pair of couplings weighs around 250g (they are made to fit tubes of various diameters).

Splitting the frame is easy enough; the coupling nuts are loosened using the special C-spanner supplied with the frame, and then unscrewed to allow the ends to be parted. Disassembled, it would fit in the Ritchey’s case – or even a slightly smaller 26×26×10in (66×66×25.4cm) S&S case. 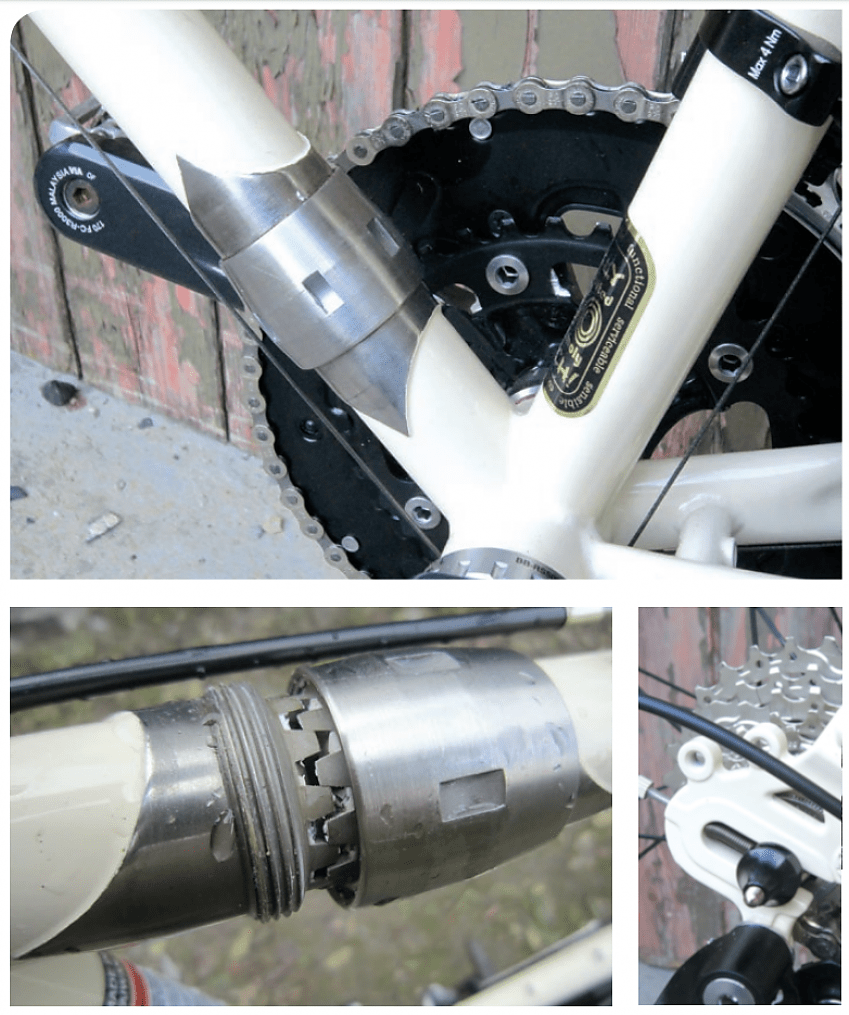 Clockwise from L: Separated joints need to be kept clean. No loss of strength/stiffness at joint. Dropouts allow singlespeed/hub gear use

For assembly, the teeth on both couplings must be correctly aligned before tightening the nuts, and some practice may be needed before it becomes a straightforward procedure. The nuts should be checked for tightness before each ride and owners are advised to ensure that the accurately-machined mating surfaces are not contaminated by grit or other unwanted material. The new Travellers Check owner will need to buy a suitable case to go with the frame and, ideally, cable connectors (the test bike was supplied without them).

The Travellers Check is a hefty machine that should outlast a world tour. It’s equipped with sturdy wheels fitted with tyres presumably chosen for all-roads grip rather than speed. The frame is built for comfort, with a shallow seat angle that hampers hard pedalling. Long-slot rear dropouts and heavily-indented chain stays mean there’s some rear-end flex when pushing strongly on the pedals. There’s none from the couplings, which are visually prominent but otherwise easily ignored.

The test bike’s 9-speed Sora components proved competent, as may be expected of a Shimano group set at any price point, as did the selection of Genetic-branded finishing components. Some early squeal from the Genetic cantilever brakes vanished within a few miles to leave effective, if slightly wooden, braking.

Is this machine the obvious home for a pair of S&S couplings? If you are planning an overseas tour and want to keep shipping costs to a minimum, then here’s an answer right off the shelf – provided it’s ordered in good time. 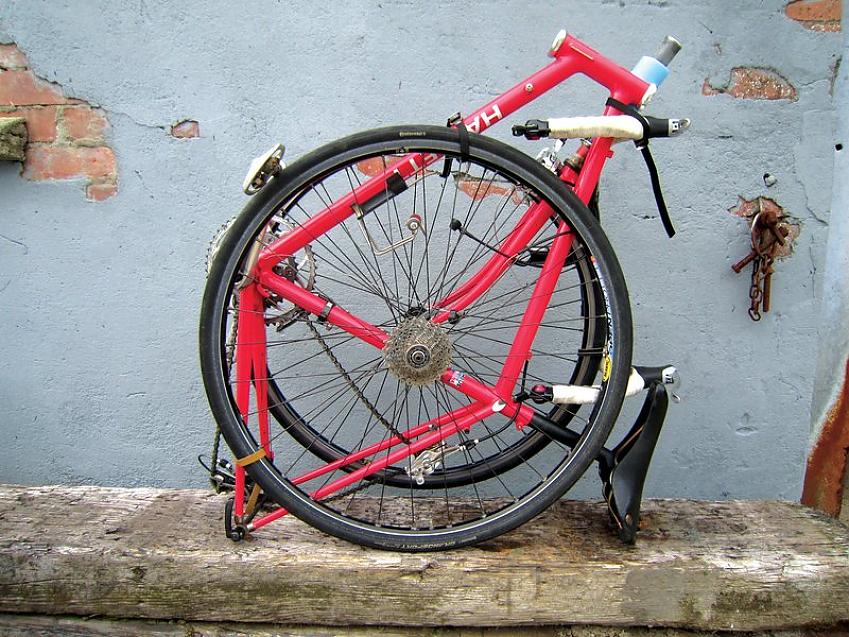 Rinko is the system used by Japanese cyclists to prepare their machines for travel, particularly on a rail system that requires cycles to be carried in a bag and to fall within strict luggage dimensions. The idea is to partly disassemble the cycle and strap the resulting component parts side by side to reduce its profile. It can then be placed in a suitably-sized soft bag ready for transport. Many Rinko enthusiasts find the system also works well for air travel even though the size of the packed bike exceeds many airlines’ standard maximum dimensions. A favourite trick is to tape the bag tight against the cycle inside, reducing its overall size to an acceptable level while enhancing the bag’s protective effect.

The idea is to partly disassemble the cycle and strap the parts side by side.

While Rinko bikes have traditionally used a quill handlebar stem and threaded headset, requiring a special arrangement for tightening, the threadless headsets seen on most of today’s cycles need nothing more than a suitable Allen key or two and make the job easy. I broke down a fairly standard contemporary road bike Rinko-style to see how easy it was. The only significant issue for many touring cyclists will be the rear mudguard, which on Rinko bikes is usually made separable at the rear brake bridge, with the detached part wrapped around the rear wheel for packing. Alternatively, and depending on time available, it could be detached in its entirety and secured in the same way.

A quick search online will produce plenty of words and pictures on the subject. Start by unhooking all control cables. Down tube shift levers work well on a Rinko bike, as does SRAM’s eTap, by making it easier to place the handlebars freely, unimpeded by gear cables. I simply removed the bolt-on down tube gear cable stops to free the cables. Slotted rear brake cable stops also help with this, but beware of tangles. Remove the rear wheel (and excess mudguard if fitted) and place the cycle on the ground resting on the rear dropouts and rear of the saddle. Secure the chain using a strap; it may be wise to unscrew the rear mech to protect the hanger. To protect the rear stays from crushing, I installed a dummy rear wheel axle using the wheel’s skewer, but this is optional. 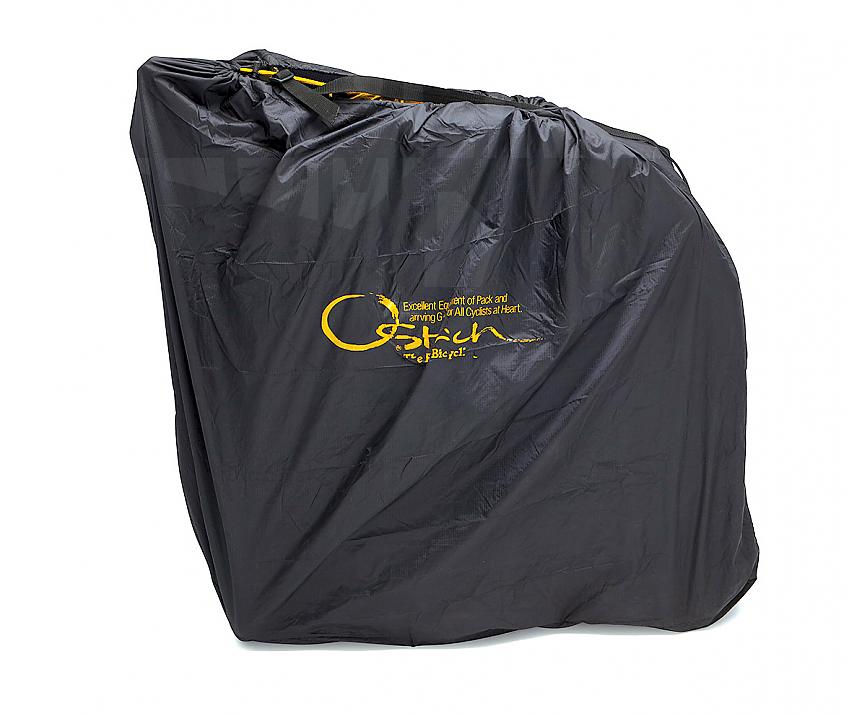 Remove the front fork complete with wheel (and mudguard if fitted). It’s a good idea to clean the steerer tube, bearings, and cups of grease; if the cycle is Rinko’d a lot, these parts can be used ‘dry’. It’s also a good idea to keep the transmission as clean as possible. Put the headset parts back on the fork and secure them using the top cap. Lay the rear wheel on the ground, cassette side down, and place the frame over it drive-side up. Protective sleeves can be placed on the frame. Now place the fork and front wheel on the frame, with the steerer against the head tube, position the handlebars somewhere convenient, and use several straps to pull the whole lot tightly together. It creates a surprisingly sturdy package, which you can then place inside a lightweight bag small enough when folded to be carried on the bike.

Some Rinko users fit special quick-detach pedals or remove standard ones, but even if left in place they only stick out a bit and help locate the wheels. My 56cm cycle, packed Rinko-style, measured roughly 80×80×30cm, or 190cm/75" in total, which – bagged as luggage – allows carriage on Eurostar and TGV trains, and should pass muster on UK trains (where 90×70×30cm is specified).

Rinko parts and accessories, including bags, sleeves, and components, are available from Compass Cycles: compasscycle.com/product-tag/rinko/. 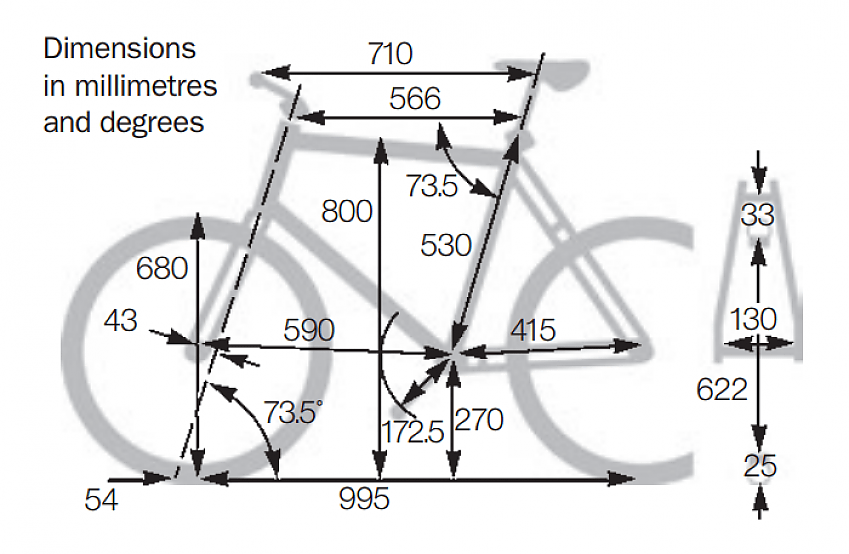 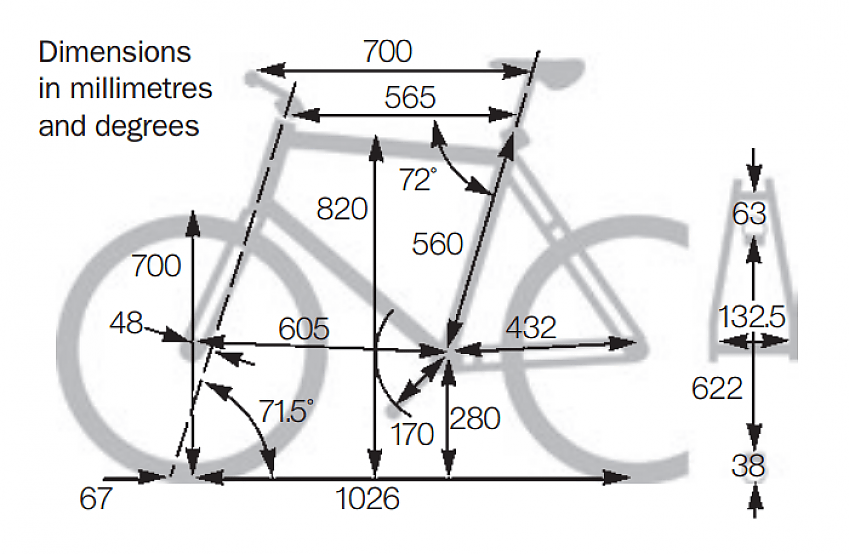 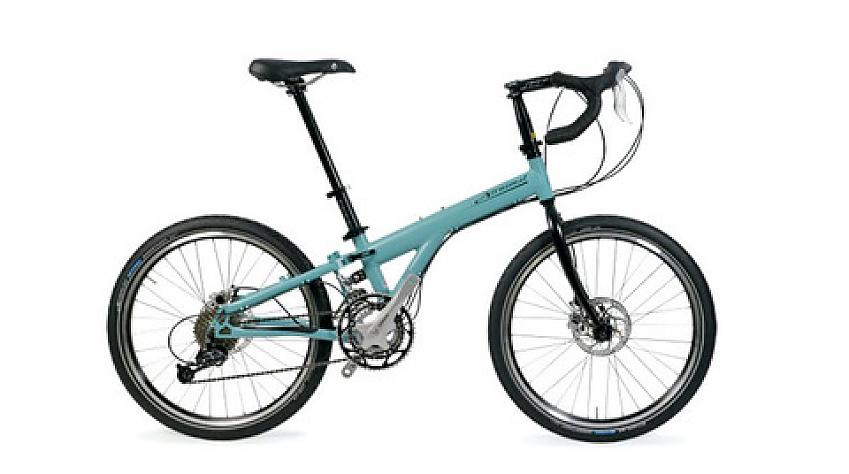 1. Airnimal Joey Explore Drop £1,699
24 in-wheel road bike with a ‘first fold’ that’s small enough for a car boot and that dismantles to fit into an airline case or bespoke suitcase/trailer in about 15 minutes. Reviewed Dec 13/ Jan 14. 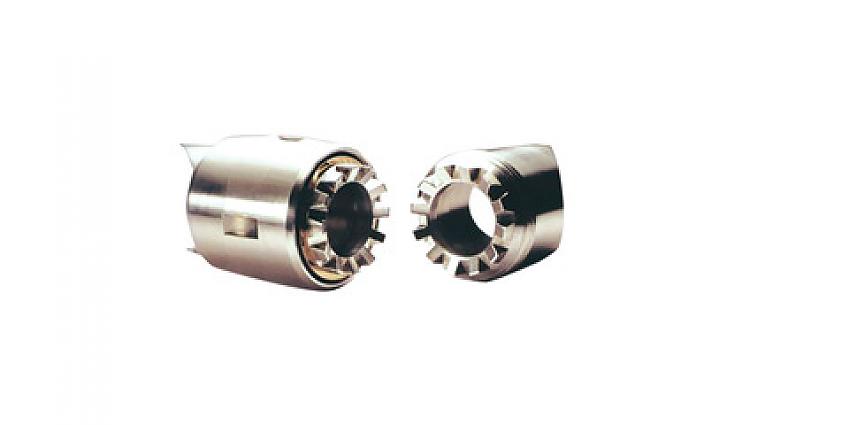 2. S&S Couplings £600 APPROX
Available as an option on a new steel or titanium frame or as a modification from some custom frame builders. Additional cost is around £600.

A guide to taking your bike on an aeroplane View