This 38km loop takes you east from Helston, climbing up through the town before dropping into Helston’s nominated harbour at Gweek, and then on a tour of the beautiful wood shaded creeks and tiny cottage hamlets of the Helford River as it broadens towards the sea.

You’ve got the option to cross the river itself at Helford on a tiny foot ferry before looping south to join the West Kernow Way long-distance bike route back to Gweek. As the ferry is seasonal, the core route stays on dry land, heading north to the beautiful village of Mawnan Smith and then returning west across rolling hills and wooded valleys through Constantine towards Trenear. You’ll then glide down quiet ridgeline lanes back into Helston.

While there are lots of gravel diversions if you want them, the core route is entirely on road so will suit any bike. We have to warn you there are lots of steep climbs and descents to test your legs and your brakes.

With so much ancient and modern history, wildlife and stunning picture-perfect pockets of Cornwall’s woodland, creek, boating and farming life to enjoy, it’s absolutely worth the effort.

If you want to include the ferry and return on the other side of the river, be aware that it only runs in summer and not every day, so make sure you check before you set off.

This is one of three routes starting from the Cycling UK EXPERIENCE hub in Helston.

Have a look at the other routes: Mullion coves and Porthleven and The Loe. 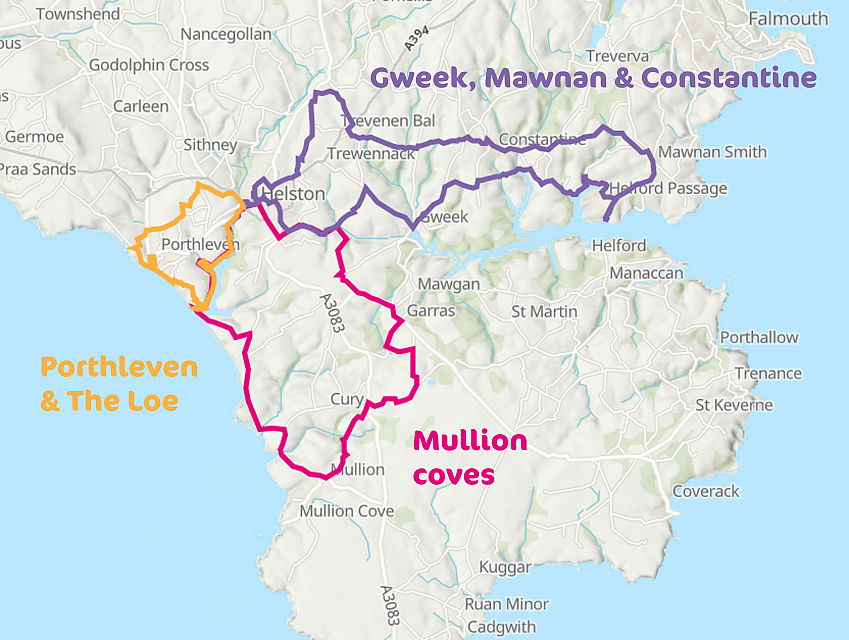 Spot the seals at Gweek

Crossing the road from Coronation Park, use the back road next to the car park to loop round and up onto the main street. While it’s tempting to go for glory up the broad climb, it’s probably wiser to drop a gear (or several) and warm your legs up gently as there’s no shortage of work for them to do during this ride.

The road carries on climbing steadily past the tiny cinema and the grand looking Godolphin Club, then turns right up a small lane just after the thatched cottage with a blue plaque showing it was the home of World Champion boxer Robert Fitzsimons.

Head on past the playground and then turn north to the cycle path alongside the ring road. Cross the ring road at the sign for the recycling centre following the back road and turning left down the hill past the Flambards theme park. Turn right down the lovely stream valley towards Mellangoose, climbing up the far side before a ridgeline descent along Gweek Lane, enjoying the panoramic views of the journey ahead past ancient earthworks, and then dropping into Gweek itself. 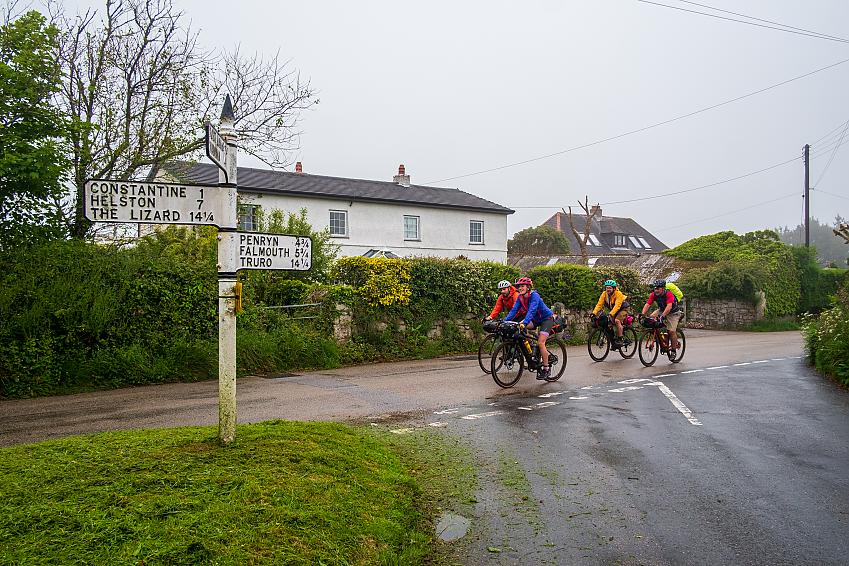 This wonderfully unspoilt working village became Helston’s local harbour after the Loe Bar sandbank cut it off from the sea, and the creek next to the quay is still busy with modern boats and the remains of old hulks gradually returning to nature. The pretty white buildings include a shop, post office and pub, and the National Seal Sanctuary is just on the edge of the village too, so there are plenty of reasons to stop to explore.

At some point though, you’re going to have to winch up the long climb to the earthworks at Carwythenack Chase and then peel off for the power dive and steep heave through another of the seemingly countless enchanting wooded stream valleys that make the area such a pixie hotspot.

You’ll join the dots between more of these magical spots as you head east below Constantine but be warned that the hills - both down and up - are even steeper, so be ready to work your gears like a pinball player or just get off and push.

Gorgeous spots like the slipway and luxurious houses of Porth Navas and the shaded contouring lanes up to Trenarth bridge where old boats are left to dissolve slowly back into the creek are simply breathtaking, if you’ve got any breath left after the climbs.

If you’re riding the route between April and October you’ve got a choice here, as you can take advantage of the foot ferry to the beautiful thatched and whitewashed village of Helford on the south bank of the river. From there, you can join the route of the West Kernow Way long-distance adventure on a richly historical rollercoaster back into Gweek.

Even if you don’t fancy the ferry, or it’s out of season, Passage Cove with its small beach and the traditional Ferryboat Inn serving refreshments is a lovely spot to stop. It’s a really steep hill down to the river though, so be prepared to work hard or walk on the way back up.

From here, it’s a refreshingly flat couple of kilometres past the National Trust garden at Glendurgan into the village of Mawnan Smith. With the gorgeous thatched Red Lion pub at its centre as well as a café and shops, this is a great halfway spot. As the name suggests, it used to be a centre for horse repairs too, with four different blacksmiths having forges here in the 19th century. 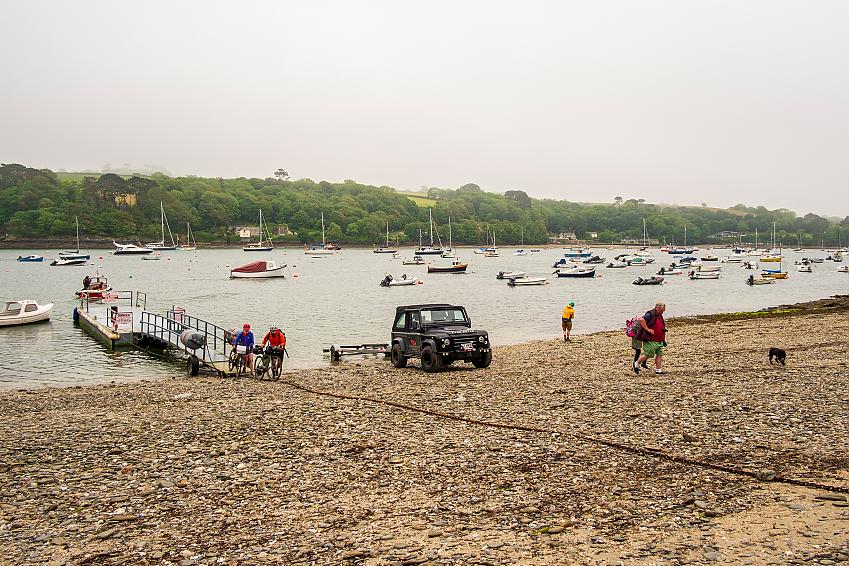 From Mawnan, you head north-west on tiny twisting, high-banked roads, under a tunnel of trees past farms and tiny hamlets. Crossing a stream through an ancient wood with old mini scoops and mill ponds you’ll then climb east through open fields and rolling valleys to the village of Constantine, which is your last chance for a pub stop or supply stop from the well-stocked shop.

Then it’s west through Brill with its high hedges, past old stone ivy-wrapped farms, dipping through vivid green stream valleys on gravel-centred roads past Merther Uny and its ancient crosses and remains of an old chapel.

A steeper down-and-up through Treloquithack swoops you past more old cottages, some with rusted outhouses, some renovated and pristine. This whole section is bursting with bridleways, ranging from gravel farm tracks and broken roads to sweet singletrack chasing streams through pixie woods past ancient earthworks, so this part of the route can easily be transferred off-road if you’ve got the right tyres.

On the road, the hedges drop a little in height to let you fully appreciate the lush rolling farmland as you pass the stone farms and mills that used to reap its riches but are now mostly residential. The carpet of tiny fields has barely changed at all since Celtic times and the charm of this often forgotten corner of Kernow is only momentarily disturbed as you sneak across the main road to Helston.

A century or so ago, this landscape would have been very different, as you’re now climbing gradually through Helston’s old mining heart, looping round past the works and pristine old school house at Wendron. Then it’s a roll down south on a deep floral hedged, barely handlebar-width lane with the chimneys of old ruined pumping houses looking starkly out of place in this otherwise green and pleasant land that stretches away to the sea on the horizon.

Rolling to the end of Rowe’s Lane, you briefly join a bike path alongside the main road, peeling off into town at the roundabout. After crossing another two roundabouts, you then divert around the one way system. This turns you down past the lovely building of the community college, St Michael’s church and then into the heart of Georgian Helston where grand houses and tiny cottages squeeze side by side.

Then it’s one last rise up past the old cannon guarding the fascinating free Museum of Cornish Life in the old market hall/drill house, and around the distinctive rounded rump of the ornate granite Guildhall where the Flora Day dance starts every year.