How Linda learned to love cycling in 2020

Linda gets ready to set off for a ride

How Linda learned to love cycling in 2020

This time last year Linda Clark didn’t own a bike and hadn’t ridden since she was a child. After a year unlike any other, she is now a cycling convert. Support from Cycling UK’s Big Bike Revival enabled her to broaden her horizons and think about new cycling goals

From riding not much further than the end of the road and back when she started, Linda Clark from Leighton Buzzard is now clocking up 15-mile rides and itching to explore further.

Linda says: “Five or six years ago, I wouldn’t have got on a bike at all. I was seriously overweight at about 24 stone, and over the last five years I have lost more than half that weight now, at around 11 stone.

“I have bad knees and I was advised by my doctor to take up cycling or swimming. I chose cycling because you can just go and do it from your front door, it’s so accessible and the freedom it gives you is incredible.

“Finding cycling has been brilliant, because it is something that I can do easily and by myself. It really has been life changing.”

Although Linda discovered cycling later in life, she says she is now out on her bike as often as possible.

“I am a convert to cycling. My family all think I’ve gone mad,” she says. “I haven’t ridden since I was a kid, I am 57 now and I am really enjoying it.” 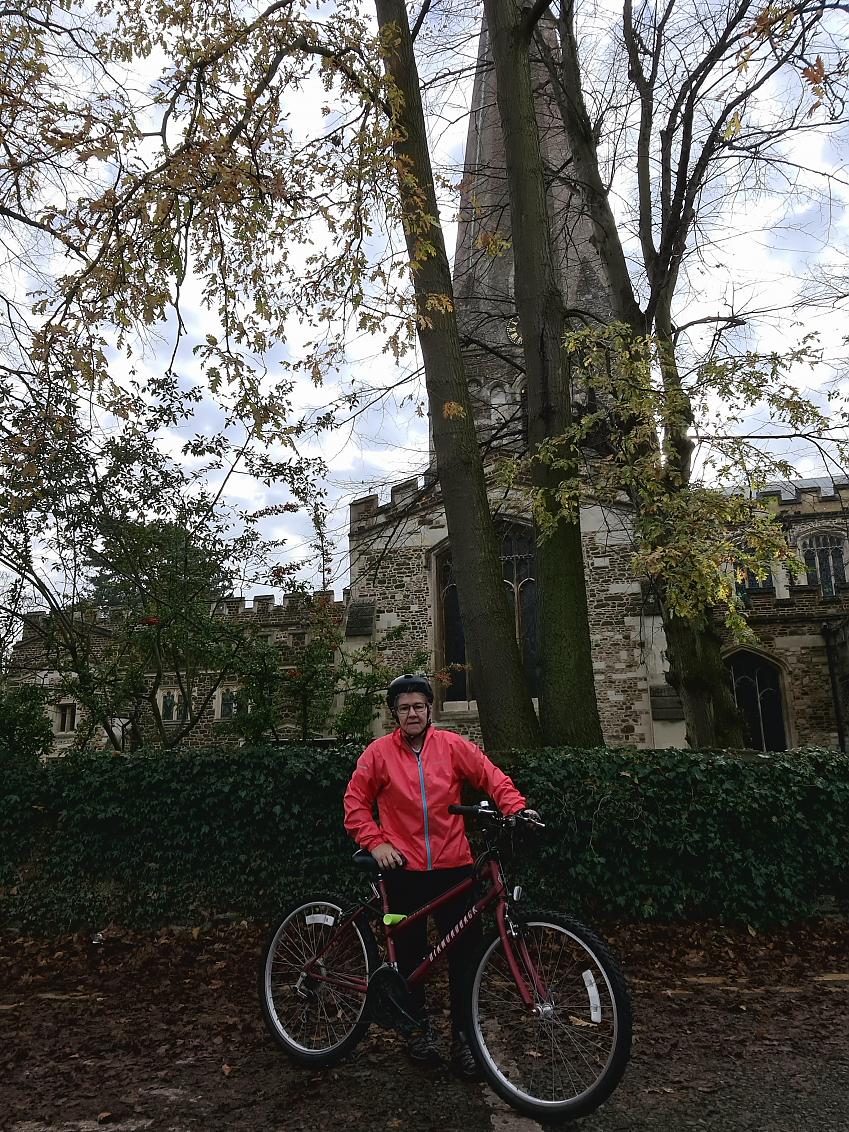 Linda Clark with her second-hand mountain bike. A Dr Bike session to check it was road worthy gave her the confidence to ride further

A visit to a Dr Bike session held by Leighton BuzzCycles and funded by Cycling UK helped Linda to feel more confident as a cyclist.

She says: “I started cycling at the beginning of last year when I bought a second-hand mountain bike. There wasn’t anything that particularly needed fixing, it was more to do with confidence that I can ride the bike further and reassurance that mechanically everything was OK.

“The Dr Bike mechanic adjusted my saddle height, and checked the brakes, tyres and chain. He also gave me some advice about things I could do to look after my bike which was helpful.”

Her visit also helped Linda to find out about a local cycling group, and although group riding activities are currently suspended, Linda now knows she’ll get a warm welcome when they eventually resume.

“At the moment, I cycle by myself and it can be quite lonely. I also tend to cycle on a loop around the area I live because I am worried about something going wrong like a puncture a long way from home, but the drawback of riding in a loop is it can get a bit boring.

“As a new cyclist, going along to a group can be quite intimidating if you don’t already know someone. You wonder are they all going to turn up on road bikes with drop handlebars in snazzy kit or am I going to get left behind? Already knowing someone from a club makes you feel less daunted about going along.

“I got my bike a week before lockdown started so the timing was fortunate. To begin with I just rode for about 15-20 minutes around the block but I have progressed and now I can ride for a couple of hours and do about 15 miles.

I have lived here for 30 years and when I go out on a bike, I find places I didn’t even know existed

“I have definitely got fitter and faster in the nine months since I started. I am limited now by my bike – I’ve been getting a bit of a hankering for a road bike – and by the routes. I am looking forward to riding with people when it is possible this year because I do want to go faster and discover some new routes.”

Even though her current route may be repetitive, Linda says it has still helped her to get to know her local area well. “I have found so many new places too,” she says. “I have lived here for 30 years and when I go out on a bike, I find places I didn't even know existed. I cycle into town with my rucksack to do a little bit of shopping as well.”

Linda also has another cycling ambition for the new year. “There is a canal route between Leighton Buzzard and Milton Keynes and I have ridden parts of it, but I was meaning to ride all the way in the summer, but haven’t done it yet, so that is something I’d like to do later in 2021,” she said.

Completing the full journey and back would be a source of great satisfaction for Linda, and it’s amazing what a confidence boost getting your bike fully checked over by a mechanic courtesy of The Big Bike Revival can give.

“The Dr Bike scheme was fantastic,” Linda adds. “It has given me relief that my bike was set up just for me and safe to push myself a bit further.”

Melanie’s incredible weight loss all down to the bike View