This Valentine's Day, Cycling UK spoke to three cycling couples who not only found love through cycling, but whose relationships have been strengthened by their volunteering, adventuring and ride leading

Romance blooms in the New Forest - Debbie and Davin

When keen cyclist and Cycling UK member Debbie Lord decided to go along to the New Forest Rally, she wasn’t expecting to find love.

“I’d been to the York Rally a few times, and after reading about the New Forest Rally, which I’d never been to, I decided to try it, just to see what it was like,” said Debbie.

On the second day of the rally a gentleman, whose tent was pitched nearby came over to say hello.

Could you tell him I remember him, and does he still want to go out on his tandem?

“He just kept passing the tent every now and again and we’d chat and then in the end he said, ‘why don't you come out on my tandem’. That was his chat up line,” Debbie said with a chuckle.

Their love story nearly hit a pothole when Debbie left the Rally without seeing Davin to say goodbye and to accept his offer of a tandem date.

Luckily thanks to the network of cycling groups in the UK, it wasn’t too hard for them to find each other.

“I got in touch a few days later. I knew he was with the Portsmouth CTC, I'd said do you have a member called Davin who cycles with you and goes to the New Forest Rally?” Said Debbie. She asked the group, “could you tell him I remember him, and does he still want to go out on his tandem?”

“He got in touch and we met up at Goodwood racecourse, at the café and we went out on his tandem.”

Davin, an old hand at tandem riding, took Debbie out for her first ride as a stoker.

“It was scary at first, and I was really nervous, but I did quite enjoy going out on it.” 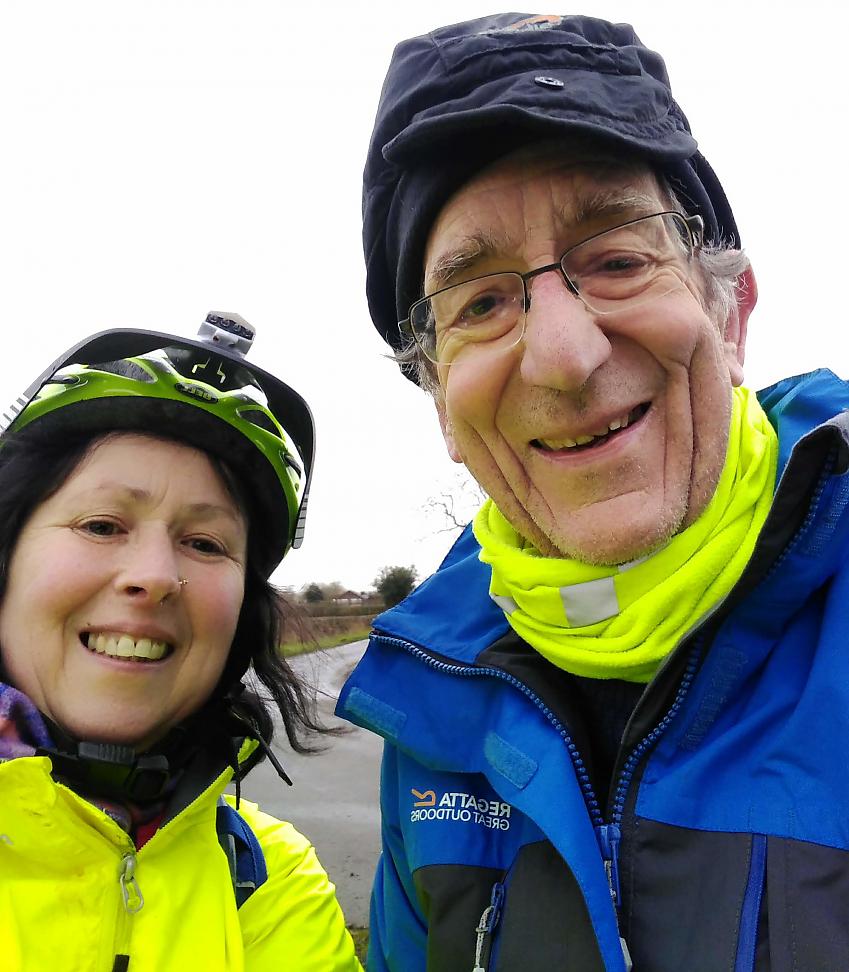 After a few more tandem rides together and lots of cycle trips from Portsmouth, where Davin lived, to Bognor Regis, where Debbie lived, the couple moved up to Cheshire together: “We've been together for about six years now."

Debbie and Davin don’t just share a love of cycling, they are both also actively involved in improving cycling for people in their communities.

“I belong to Good Neighbours, they deliver shopping and prescriptions for people who are vulnerable,” said Debbie. “I do mainly the shopping and I do it on my bicycle.

“I have a trailer if it’s a lot of shopping, if it’s just a small shop I just bring my panniers and rucksac.” 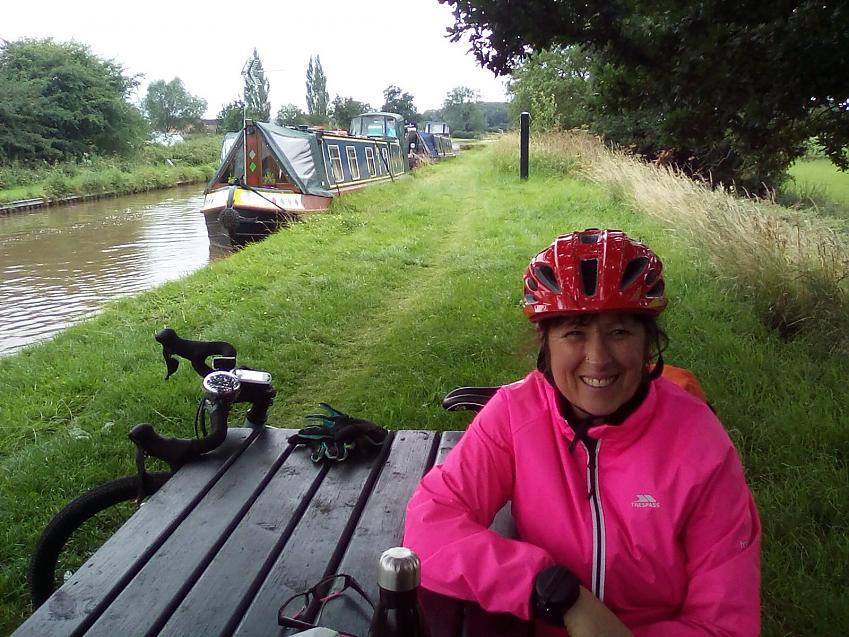 Debbie relaxing by the river

Both Debbie and Davin also volunteer at one of the Big Bike Revival delivery partners, Community Recycle Cycles, based in Crewe.

Davin, a skilled engineer, can often be found working in his shed at home fixing up bikes that have been donated to Recycle Cycles.

When possible to go out on long rides again, the pair plan to take a leisurely cycle ride from Cheshire to the south coast to visit family and friends. 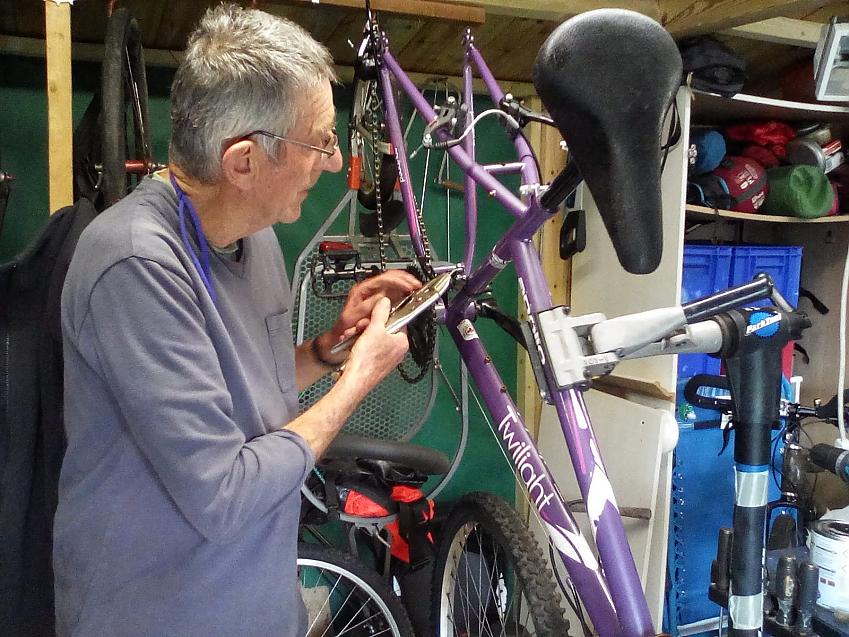 Joined at the frame - Laura and Stevie

While volunteering at a beer festival, Laura, a veterinary surgeon from Derby, met Cycling UK member, Stevie. While she poured the pints and he supped, he spun her a tale of cycling from Lands’ End to John o’ Groats (LEJOG) and back. It turned out, it wasn’t just the real ale talking, and five years later the pair are married, and on their Dawes Galaxy tandem they have embraced their passion for long-distance riding.

Laura had always been a keen cyclist, commuting on her bike and riding for fun, but it wasn’t until she met Stevie that she participated in longer event rides and for the couple, cycling is more than just a pastime.

“Cycling means that we do so many things together,” said Laura. “Instead of Stevie going off and playing golf and me going shopping, we spend a huge amount of our spare time together, because we share the same passion, and we enjoy the same thing.

We support each other and help each other through.... If it is particularly challenging or tough, if you’re there with your partner, with your best friend it makes it all the easier

“And by doing the more challenging events, we support each other and help each other through as well, which makes a big difference. If it is particularly challenging or tough, if you’re there with your partner, with your best friend it makes it all the easier.”

One of the couple’s very first long-distance rides together was the Ride London 100, which they did under their own two wheels.

“He took me out to start to train me to do that,” said Laura. “We started off doing shorter loops to begin with, just on my hybrid bike at the time, and then gradually built up to longer and longer loops and then did the ride in 2015.” 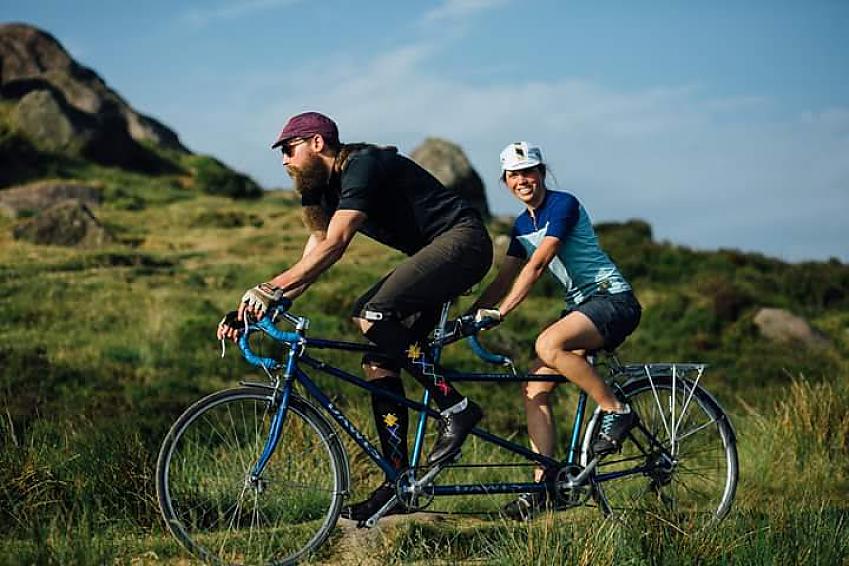 Laura and Stevie on their Dawes Galaxy twin

But Stevie soon got Laura onto a tandem.

“The first time we cycled together on the tandem, it was a fairly short ride to near his mother's house for a meal on Mother’s Day,” said Laura. “It was quite an experience if you’re not used to not being in control and seeing where you’re going, it felt like a bit of a rollercoaster.

“We went down the smallest hill ever and I was absolutely terrified.”

Laura soon got used to relinquishing control on the bike and in 2020, the pair completed LEJOG together.

“It was amazing,” said Laura. “It was an absolutely fantastic experience. Being joined by the frame for the best part of two weeks was quite intense and we had some long days, but it was amazing to see the whole length of the country at the speed of a bicycle.” 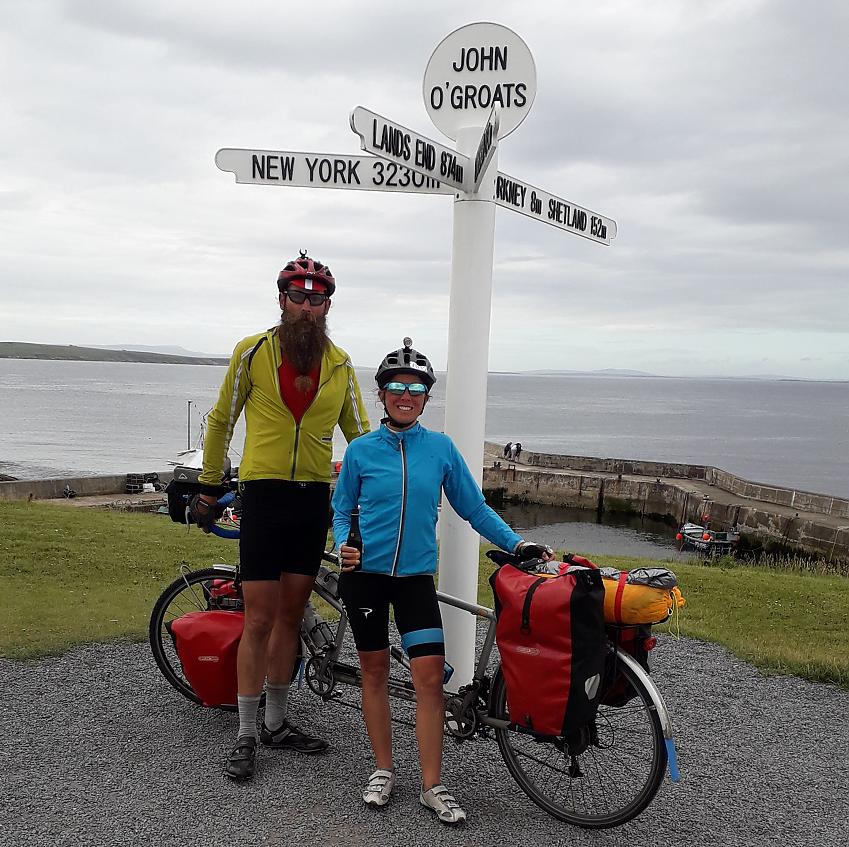 Now experienced long-distance riders they’re planning their most challenging ride ever. Inspired by the achievements of Cat Dixon and Raz Marsden, they plan to break the round the world by tandem record.

“We saw what they did and how they just got back in before lockdown, and we just thought it was amazing,” said Laura. “We looked at the stats and logistics of it and as much as their achievement is absolutely epic, we looked at what we'd done doing the LEJOG and thought, I think we can do a bit faster.”

Aiming to promote cycling as something that everyone can do, they’ll be setting off in June 2022, and Cycling UK will be watching. 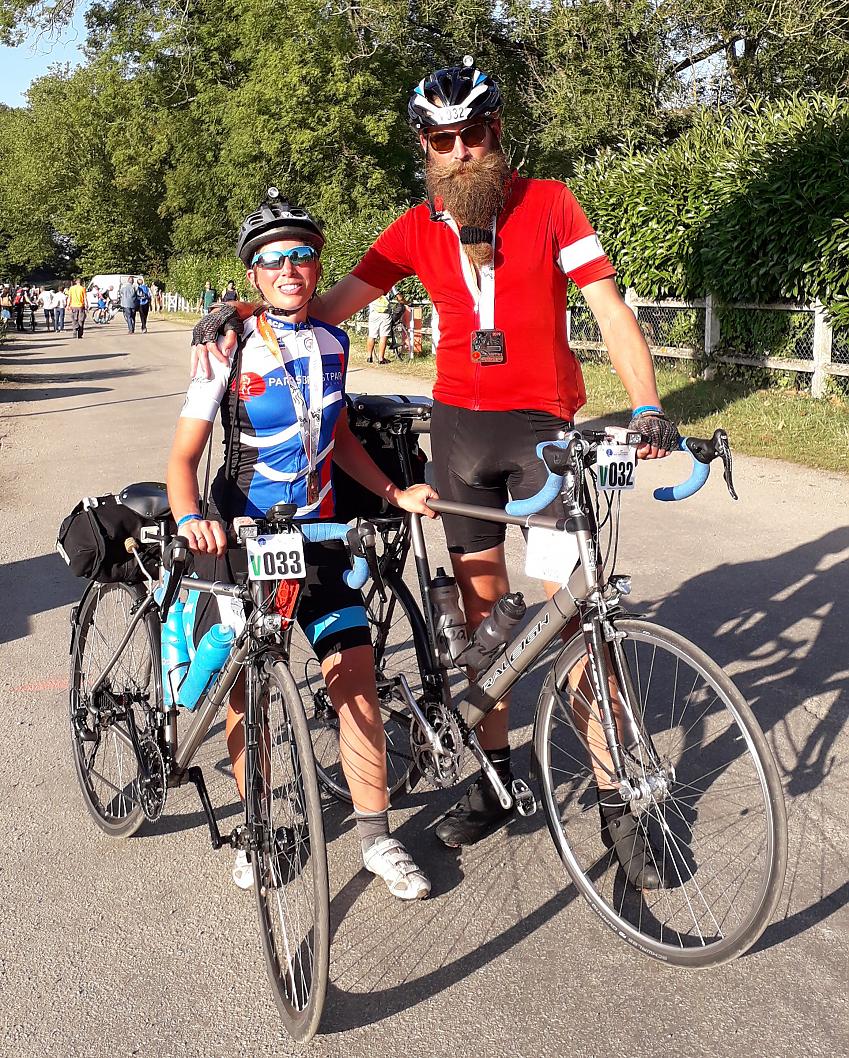 Laura and Stevie at the end of Paris-Brest-Paris, 2019. Laura on a Spa Audax titanium and Stevie on his hand-built Raleigh dynatec titanium

Danielle Pieton and Jon Rawson spent four years in the same cycling group in Cornwall before they ever even met. Once they did, it quickly became a love connection and before long, they were leaving rainy Blighty for the peaceful cycling paradise of France just south of the Loire River.

“We both belong to the One and All cycling club in Cornwall, but we were in different groups,” said Danielle. “I was in a slower group than Jon. It’s a big club with over 120 riders in four different groups and the groups really go out quite separately.

“We had mutual friends who saw an opportunity to get us together, and they persuaded me to push myself and work a bit harder and go up to the next group.”

Once Danielle found herself in Jon’s riding group, they met like countless other cycling enthusiasts have for eons, at a café stop. 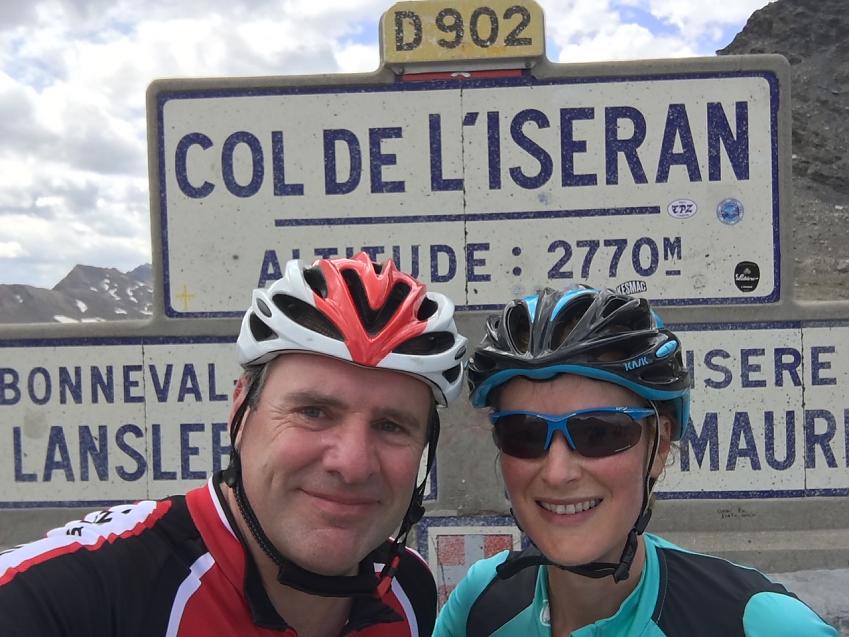 “Jon turned up with the one of our mutual friends, sat down with us and that was pretty much it.”

Their love of the sport drew them together, and since meeting they have taken part in challenge after challenge, including The London 100, the Bernard Hinault sportive, and several climbs including Mont Ventoux, Col de l'Iseran, Cormet de Roseland, and Sa Calobra.

Achieving something big is brilliant in itself, but when you can do that with the person that you're with and have that joint sense that we're both succeededing, it's lovely, it's a really nice feeling

“There's nothing like a challenging ride to draw a couple together,” said Danielle. “I think achieving something big is brilliant in itself, but when you can do that with the person that you're with and have that joint sense that we're both succeededing, it's lovely, it's a really nice feeling.”

At the start of 2020, Danielle was working as a special education teacher and manager, and Jon, an engineering director. They started talking about how they could spend more time together doing the thing they loved.

“We both thought, grab life as it comes,” said Danielle. “So we decided to take a massive leap.”

The pair moved to France and bought a B&B and gîte, called La Jariette based right on the Velo Francette cycle route, where they plan to offer cycle tours for their guests, as soon as the pandemic is behind us. 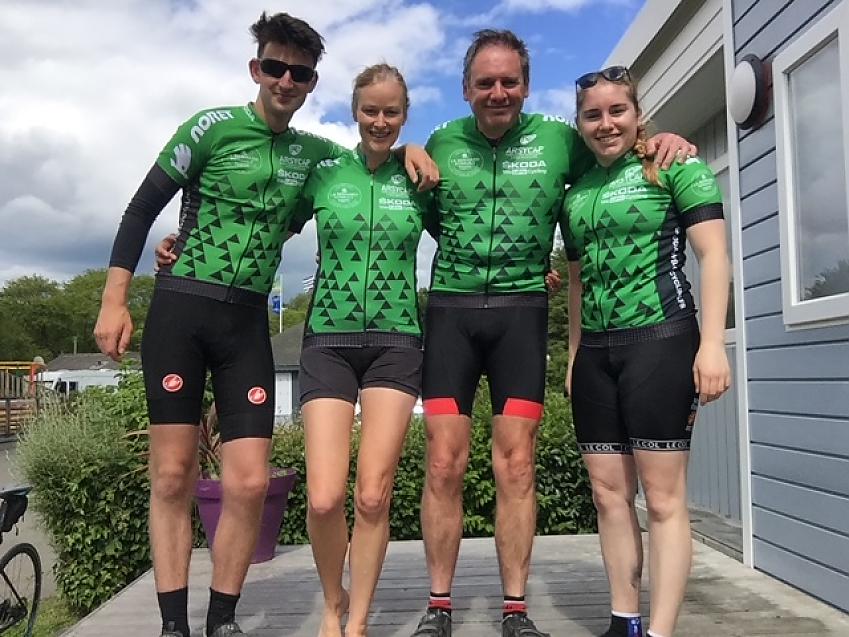