TV and radio presenter Angellica Bell is using her nomination as one of 2019’s ‘100 Women in Cycling’ to encourage more women to start cycling.

The Celebrity MasterChef winner received her latest accolade at the London Bike Show (Friday, 29 March), when she was nominated by former MTB champion, and founder of women’s cycle clothing company Anna’s Legs, Anna Glowinski, for her role in encouraging more women to cycle.

“Cycling is something that everyone should be able to enjoy. I don’t want other people to miss out on the opportunity to have fun riding a bike. That’s why I got involved with Cycling UK,” said Angellica.

“I didn’t learn how to ride a bike until a few years ago, so I’ve only just discovered in my adulthood so many things I now love about cycling.

“I’m so thrilled to have been nominated as one of the ‘100 Women in Cycling’. That’s something I never would have expected to happen!” 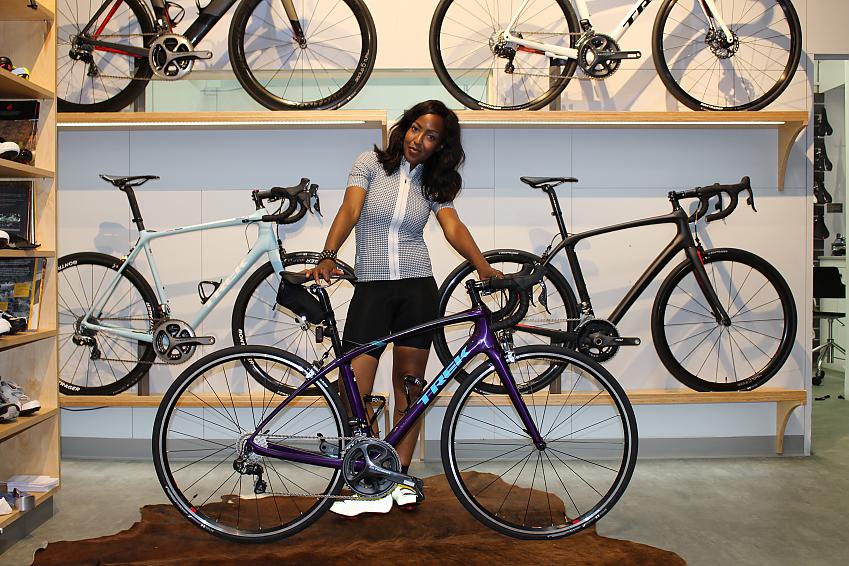 If you’re already a cyclist, encourage someone else to try it. Show people that no matter who you are, where you are or how old you are, everyone can enjoy cycling.

Results from Cycling UK’s recent supporter survey of 1,823 women showed that 75% were encouraged to start riding by a partner, a friend or a colleague and over half had successfully encouraged someone else to start cycling.

“If you’re already a cyclist, encourage someone else to try it. Show people that no matter who you are, where you are or how old you are, everyone can enjoy cycling,” said Angellica.

Paul Tuohy, Cycling UK Chief Executive said, “Cycling UK wants people to nominate their ‘unsung heroes’; women who work tirelessly to encourage and support others to cycle and improve access to cycling for everyone.

“Our ‘100 Women in Cycling’ roll call is a chance to celebrate those women and for us all to realise that we have the power to help others build cycling into their everyday lives.”

Nominations are now open for 2019’s ‘100 Women in Cycling’, with the final list due to be published when the Women’s Festival of Cycling begins on 01 July.

The festival is a month-long celebration of women’s cycling with female-friendly rides taking place around the country.

“Every woman on last year’s list was an equally worthy nominee, and this year we want to celebrate even more inspiring role models who deserve recognition,” said Paul. “Simply go online, let us know who they are and why they should be included.”

Nominate someone you think should be celebrated as one of Cycling UK's ‘100 Women in Cycling’.

Breaking the mould: Cycling UK names its 100 Women in Cycling for 2018 View
Cycling UK continues to support the UK to cycle
This remains true during this difficult period with the ongoing threat of coronavirus Covid-19
Read our latest advice on cycling