As part of Volunteer's Week this year, we're recognising the wonderful people who've been carrying out random acts of kindness throughout the country, supporting their communities, and bringing joy to others.

Head of Volunteering Alex Cuppleditch says: "We know our volunteer network is made up of outstanding individuals, but it's taken a pandemic to really highlight who some of those hidden heroes amongst us are"

We asked our members, volunteers and beneficiaries to send in a clip of themselves thanking someone for showing kindness.

The result was Lockdown Love, a short film demonstrating how positive actions can really make a difference to peoples lives.

Cycling UK would like to thank everyone who made the video possible, by taking the time to thank others for their kindness during the crisis.

Read on to find out more about the people behind the inspiring stories from Cycling UK supporters all around the UK.

As well as helping to supply and fix bikes for refugees and asylum seekers, Adrian has been getting on his own bike and using his panniers to deliver food parcels to people in need across Reading:

“Using the bike has been an ideal way to get the food out, and it’s safer than using a car because the only surface that has any contact with the parcels is the inside of the panniers, which are easy to disinfect between trips, minimising the risk of spreading infection.”

Volunteers in Oxfordshire from the Broken Spoke Bike Co-op have not been deterred. They may not have an actual workshop at the moment, but they've soldiered on, delivering their monthly 'Beryl's night maintenance sessions' (currently being organised via Zoom).

The sessions are particularly aimed at women, and the trans community,  encouraging them to participate in the wider cycling circle.

iSpysolation, played on bikes, is 2020's answer to Scrabble, and is the latest lockdown craze sweeping the Devon area.

Volunteers from South Devon CTC have come up with the rules of the game, and administer the awarding of points for places visited by bike from list released weekly.

Players have even taken part from as far afield as Cumbria and Scotland, enjoying the chance to do something different during their daily exercise jaunts.

South Devon has also created an Instagram yearbook during the pandemic, as a way of remembering happier times, and posting regular updates to members on its public Facebook page.

Further up the coast, Lyn Brayshaw, Chair of the Southampton Cycling Campaign - lead volunteer for one of our Community Cycle Clubs (Southampton Cargo Bikes) - has also being going the extra mile.

Cycling UK's Ruth Magennis (Cycling Development Officer for Southampton) says: "Lyn has been working tirelessly to make bags from old Let's Ride bibs for NHS workers to store their scrubs in hygienically, and has organised for them to be distributed to the hospital through volunteers on bicycles."

As Chair of the local cycling campaign, she has also spearheaded a local campaign to support new cyclists, by putting up local routes on their website and coordinating with volunteers who can ride with people new to cycling at a safe distance, giving them confidence.

Meanwhile, Chris Tompkins from Southampton CTC has also been a busy bee.

So far, he's organised a Zoom social meeting with members twice a week, so that they can see each other and share their experiences of solo rides or lockdown difficulties. The Zoom meetings also include information on bikes, recipes for cakes, route planning, and so on whilst enjoying a tea, coffee or beer together.

Chris has also coordinated members to look after the more vulnerable adult members or the group, and checked in to monitor their progress. This included taking medication and a thermometer to a member who wasn't well.

Well done Lyn and Chris for keeping spirits up in Southampton.

Chris Smith of Two Mills CTC on the Wirral, has also been communicating with group members on a regular basis throughout the crisis, whilst Janet Gregory - Secretary of Two Mills - has been assisting at Eastham Community Cycle Hub, who are providing bikes for key workers and their families.

Over at Chester & North Wales CTC, member Ian Taylor has been riding twice a week to water an orchard on the Chester Greenway. The orchard was planted by the group in memory of fellow rider Charlie Evans, who sadly passed away on a ride a year ago.

Blaen Roberts - last year's Young Achiever winner at the Cycling UK Volunteer Celebration - has encouraged youngsters to put down their knives, and instead, pick up their bikes, to deliver food and medical supplies on an electric-assist cargo bike, in partnership with Croxteth Family Matters and the Big Help Project. Not only that, but he's also helped set up a community radio station, to keep young people in the area entertained during ​lockdown - featuring an interview with mountain bike legend Olly Wilkins recently. 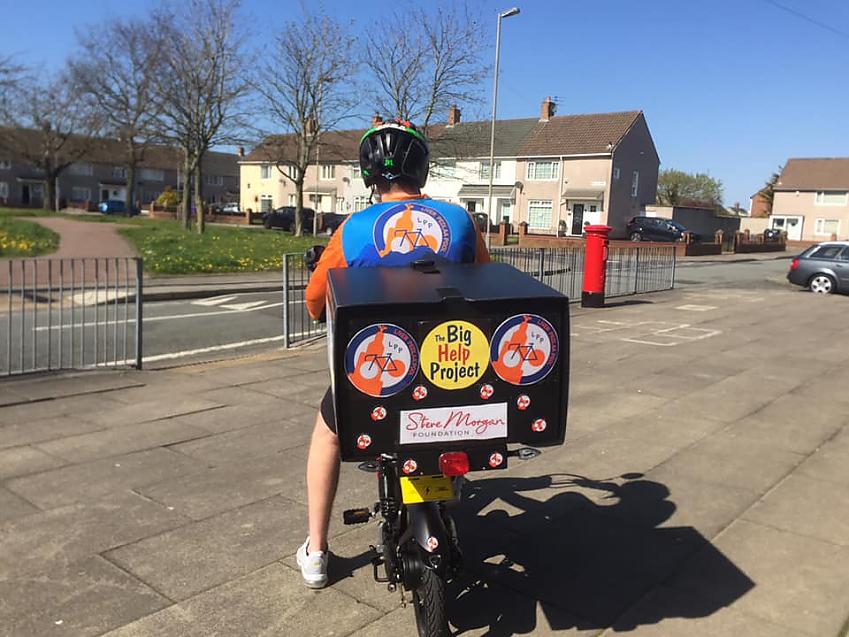 Blaen on his cargo bike. Photo by Blaen Roberts

Not far away on the Lancashire coast, Secretary of Cycling UK group Fylde Bicycle Belles Karen Hope says: "Throughout lockdown, the Belles have been busy out and about volunteering across the Fylde area. We have had members who have jumped on their bikes to travel several miles in order to dog walk for people in self-isolation, or supported local community care initiatives by shopping or collecting prescriptions, all whilst putting pedal to the metal."

They have baked cakes for prison officers at HMP Wymott, the unsung heroes who have also lost colleagues due to coronavirus​. Paramedics at local ambulance stations have also had their spirits kept high thanks to weekly cake deliveries.

Initially, this proved quite a logistical challenge as fabric had to be sourced, collected, cut, sewn and delivered to co-ordinators.

So with panniers and rucksacks loaded, the logistics girls affectionately known as ‘scrubbers logistics’, would deliver and collect all items to be sewn, or items that had already been sewn.

The belles also emptied linen cupboards and button boxes to provide much needed supplies of bedding, which was turned into caps, headbands and bags.

In total, 80+ scrubs have been donated locally to much needed key workers, and the team are well on their way to producing 100+ items. 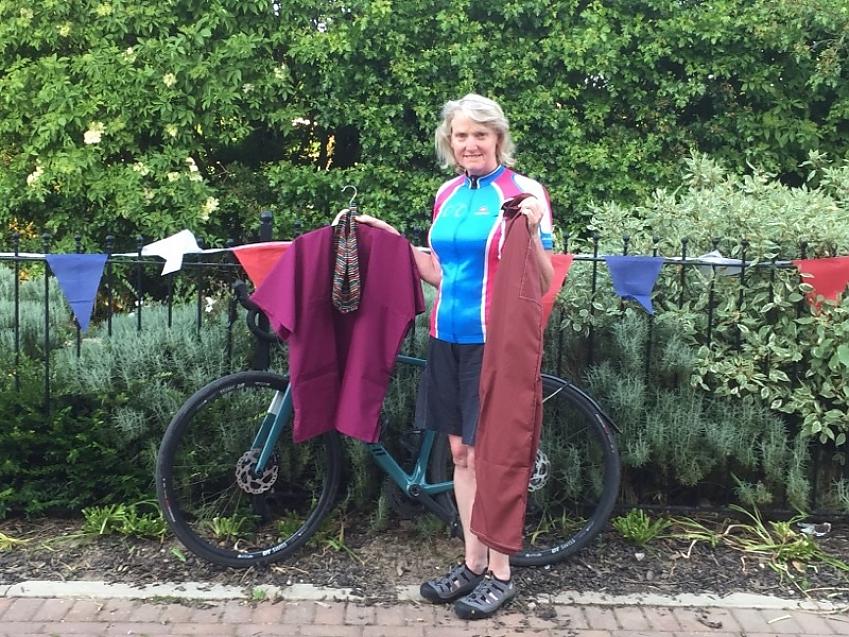 Karen Hope with some of the scrubs she and her group have sewn and delivered. Photo: Karen Hope

As well as sewing scrubs, scrub caps, headbands and bags, the Belles have also sewn and delivered over 300 masks for use in the community, and knitted 'ear savers' to help ease pressure from the mask elastic.

The fabric for the scrubs came from donations from Belles members, family, neighbours and friends. One Belle who was self-isolating decided she couldn’t cope not having a haircut, so she shaved her hair and all donations were used to purchase fabric!

Another Belle used pedal power to deliver jigsaws. When one Belle had finished a jigsaw, it would be collected and redistributed to people in the local community.

Together, they've brought joy to many people self-isolating on a weekly basis, and as lockdown continues, pedal power and volunteering will continue to provide support to our local communities and hospitals.

A big shout-out also goes to the volunteers from CERA Cycloan in Stockport: Andrew Millest and Andy Shaw, who have stepped up to the plate in such an amazing and outstanding way.

Both Andy and Andrew have been volunteering front of house; serving customers, organising and logging all jobs to be completed, making and following up parts orders, managing stock levels, and doing quick jobs in the workshop.

Andy has been volunteering four-and-a-half hour days, five days a week whilst Andrew has volunteered the same hours three days a week - both ensuring CERA Cycloan can continue to operate successfully.

These two guys are simply outstanding, caring and generous people who are greatly appreciated by all at CERA Cycloan.

Ellen Holmes, Cycling UK's cycling development officer for Greater Manchester, says: "These two guys are simply outstanding, caring and generous people who are greatly appreciated by all at CERA Cycloan. The work and time that these volunteers have been carrying out over the past few months - repairing, refurbishing and donating bikes to keyworkers, and NHS staff at Stockport hospital - is thanks to them, facilitated by funds from Transport for Greater Manchester."

Meanwhile, in Birmingham, volunteers from Cycling UK's Cannon Hill CCC have also been fixing up bikes and helping with food deliveries. 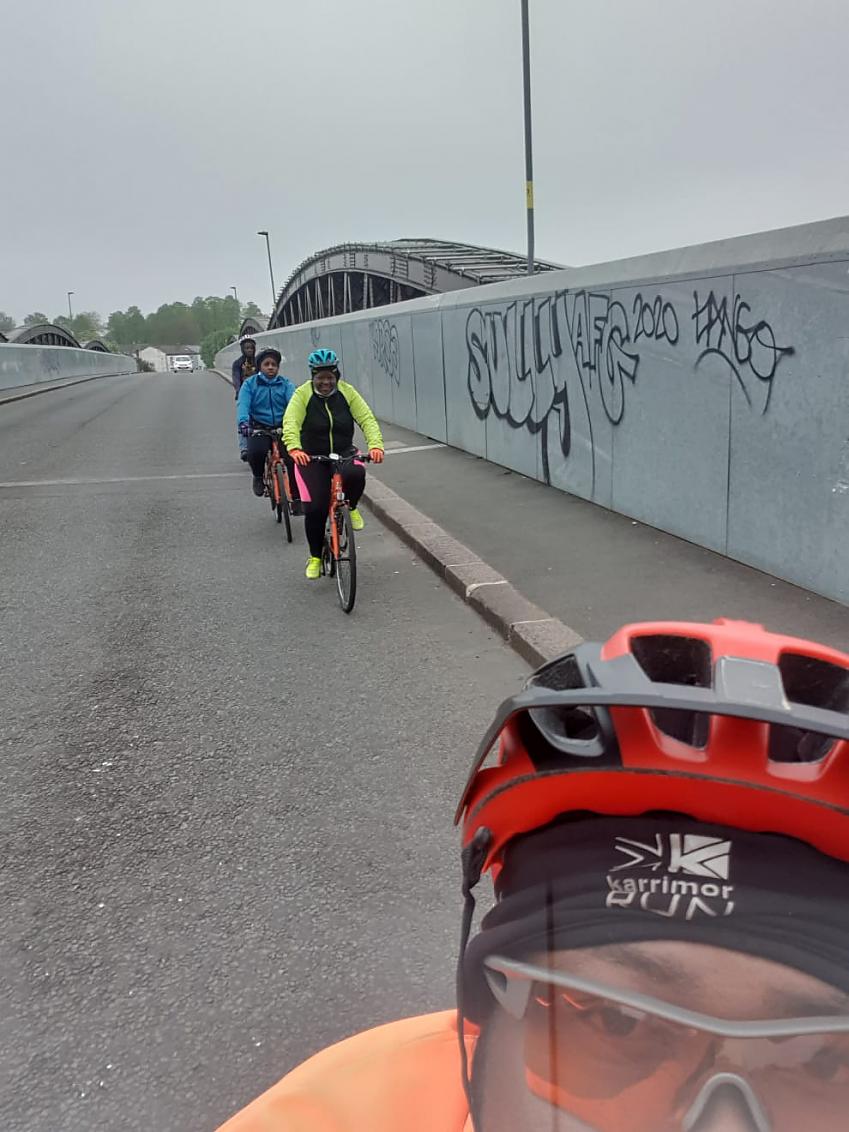 Many of our Community Cycling Clubs in Birmingham have been keeping in touch with each other via WhatsApp and Zoom, with members also helping with food deliveries and also going out for rides as a household or in pairs. 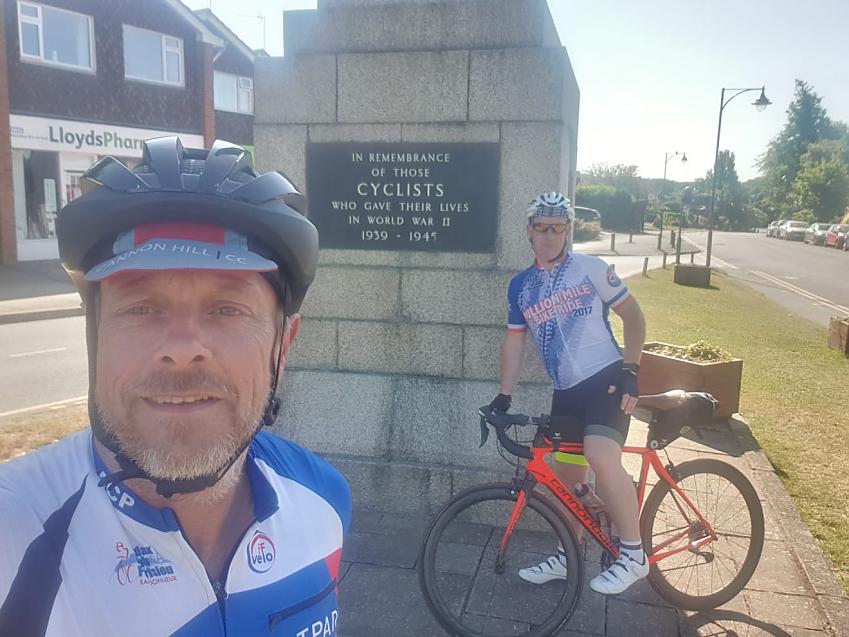 Sye James (aka Singing Sye of Lye) of Cycling UK group Stourbug in the West Midlands is fantastic at supporting new riders and encouraging them with whatever their goal is. During lockdown, he has continued to spread the joy from his bike: every morning he has cycled out to different spots to sing some songs to cheer people up and reinforce the stay home message by posting it on his Facebook page.

Paula Lloyd was given access to a bike a few years ago through our WheelNess project.

Along with the help of other volunteers at Inverness Foodstuff, she's been using her bike to supply between 200 to 400 meals each day to homeless people, those who are struggling financially, and to Inverness Women’s Aid, among others.

WheelNess also lent a trike to Councillor Emma Roddick, who is transporting groceries, prescription medicines and creative boxes to families who are self-isolating, or in need of help.

Lots of great work is going on over the border, none more so than by campaigner and Cycling UK legend Roy Spilsbury.

He says: "As well as campaigning at local and Welsh government levels, I'm attending a weekly Zoom coffee meet organised by my Cycling UK chum John Mather. My Facebook page Cycling Is Such Fun provides a glimpse of this, plus I'm keeping up my website Cycling North Wales." 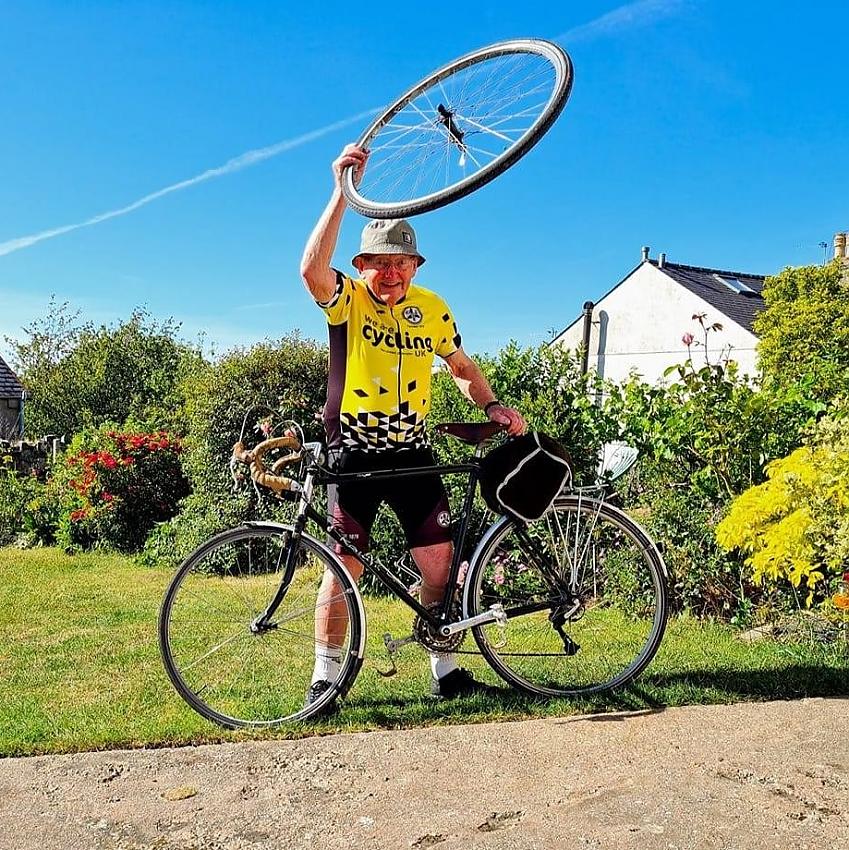 Let's hear it for the volunteers

"Many thanks to everyone who's been helping out and maintaining morale during this very unusual summer of cycling.

"Whether that's been delivering food, fixing or donating bikes, donating funds to enable us keep the wheels of NHS and key workers turning, writing cheery newsletters, creating games for cyclists, carrying out microvolunteering tasks such as letter writing, or simply continuing to cycle with each other in small groups, every action - whether large or small - is enabling more people to see the benefits of cycling to society at this time of national crisis.

"A big 'Going the Extra Mile' bicycle bell ring of appreciation to them all, especially during this year's Volunteers' Week!"

Who are your local heroes?

If so, nominate that 'someone' today who deserves that loud ding of gratitude.

We'll also be giving them a special pat on the back next week during Bike Week's Be A Hero day on Thursday 11 June.

Lockdown love: How a retired police officer is using her bike to help others View

Velocheer: Issue 10 of Cycling UK's newsletter for all our volunteers View

How to maintain morale in your cycling group during lockdown View
You too can champion cycling in the UK
Give your support today to help Cycling UK’s charitable work tomorrow. We double every pound you give through other sources to help change lives and communities through cycling.
Volunteer now
Cycling UK continues to support the UK to cycle
This remains true during this difficult period with the ongoing threat of coronavirus Covid-19
Read our latest advice on cycling