Cycling UK continues to support the UK to cycle
This remains true during this difficult period with the ongoing threat of coronavirus Covid-19
Read our latest advice on cycling
Women throughout the country took part in the Women's Festival of Cycling. Photo of South Herts CTC by Teresa Clarke

Cycling UK's second annual Women's Festival of Cycling is drawing to a close for another year but what a month it's been, with rides, events, workshops and talks up and down the country, all aimed at encouraging more women to give cycling a try. We round up some of the highlights of a fantastic four weeks of cycling and look ahead to what's coming up.

The hot weather may not be everyone's cup of tea but for most cyclists the month of July has been a wonderful time to get some fresh air and enjoy long days and evenings in the saddle with friends old and new, revelling in the warmer temperatures, lack of mud, and the chance to ride without loads of layers covering the extremities - and, of course, savour a cup of tea and a cake or two!

The Women's Festival of Cycling organised by Cycling UK provided nearly 60 different women-only rides throughout the UK put on by around 50 separate individual organisers. There were many 'female-friendly' ones too, which were open to men as well but were especially welcoming to women. Ranging from large rides for dozens of women to those with just a handful, there was a wide variety of activities to take part in both on and off-road, supported with cheerful Women's Festival of Cycling bunting and goodie bags supplied by Cycling UK.

Here are just a few of the highlights:

Several rides used a historical angle to tie in with the them of 'Cycle Liberation' #cyclelib as we celebrated 100 years since the first women in the UK were given the vote in 1914 - many of them were also enthusiastic cyclists as well as tenacious campaigners for female rights. For example: Cycling UK Lincolnshire's women's group held a ride with a 1940s theme as part of a local weekend event, while in Horsham, West Sussex, a group visited by bike some of the places in the town that were frequented by the poet Percy Bysshe Shelley and his grandfather. Ride leader Thea Bredie Turnbull said: "This is exactly what the Women’s Festival of Cycling is for, getting more women out on bikes! All participants said they enjoyed the ride a lot and five women asked for more health rides." In fact, inspired by the event, two of them - a mother and daughter duo who had borrowed bikes for the ride - then took part in a 16-mile ride to a local cafe."

"This is exactly what the Women’s Festival of Cycling is for, getting more women out on bikes!

Meanwhile, in Southampton there was a cycling tour of the places associated with the famous (and not so famous) women who called the city home and contributed to its rich history whilst elsewhere, a group of mountain bikers visited some of the houses in the Surrey Hills in which many of the Suffragettes, including mother and daughters Emmeline, Sylvia and Christabel Pankhurst, took refuge in early in the last century before watching a plaque being unveiled at the Dutch House in Holmwood, home to the Pethick-Lawrences who played an epoch-making role in not only female liberation but also many other areas of social justice.

This followed the ride organised as part of the launch event for the festival in Manchester in late June in which a large and diverse group, which included many of our 100 Women in Cycling 2018, were led around some of the places the Pankhursts lived and worked in in the city'.

The Suffragette connection was further explored during a talk at Colliers Wood Library in South London on Rose Lamartine Yates, our earliest female board member and a well-known figure in the women's suffrage movement - the talk was also part of the Women's Festival of Cycling.

Scotland saw a large turnout for the Belles Big Bike Ride in Falkirk. The ride consisted of a 40-mile loop and participants were invited to bring a picture of a woman who had inspired them, whether their mum or a Suffragette. The event was about inspiring and encouraging other women to ride and have a great day out together in the beautiful Forth Valley. All 50 places were filled, with 16 volunteer ride leaders turning out to support them. Tayside Belles on Bikes also registered a ride for the festival. 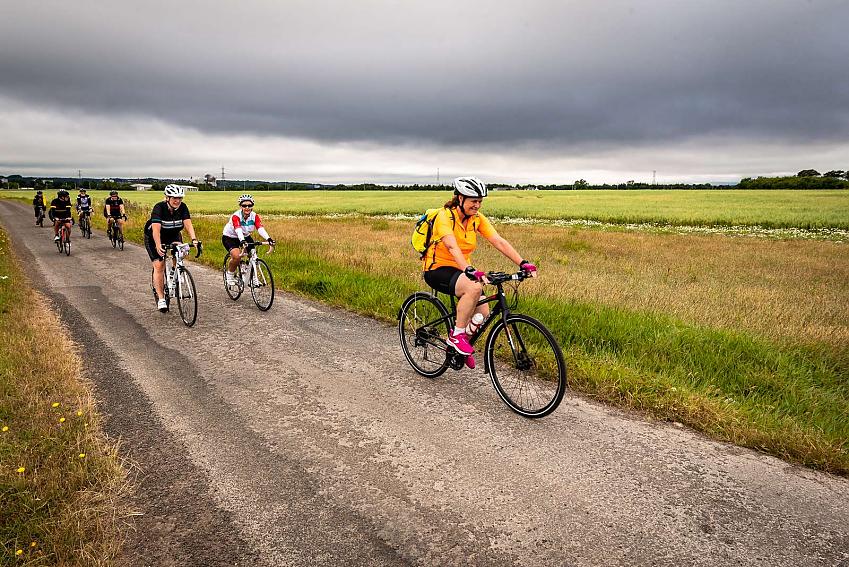 Big skies on the Belles Big Ride in Falkirk. Photo by Andy Catlin

Also in Scotland is the Heels to Wheels Cycle Festival in Kilmarnock on Saturday 4 August. The festival aims to inspire more women into the saddle, with lots of bike rides and activities including Dr Bike, electric bike trials, inspirational speakers, a Bling your Bike competition, coffee and cake plus a variety of rides of different distances. There'll be a women-only ride from Prestwick to the festival in the morning, led by Cycle Ayrshire.

There were golden cornfields, trout lakes - and quite a lot of chat!

At the other end of the UK, Liskeard Ladies, a group that is part of CTC Cornwall, enjoyed a ride down gentle country lanes with "golden cornfields, trout lakes and quite a lot of chat". Organiser Ann added: "Eight of our Liskeard Ladies met together for this special Women’s Festival of Cycling summer ride and were delighted to welcome a new member, Laura, to try out one of our rides. We were also very pleased to have Gail on her e-bike, putting us all to shame as she pedalled effortlessly past us up the hills."

In the south of England, bike shop Biketart's organised their first Women's Festival of Cycling ride around the local woods and lanes. Vicky from Biketart said: "It was a really good turn out and we were thrilled. A couple of people couldn't come on the day but it's the first event we've done for women so I'm encouraged that we got as many as we did". There were also rides by other groups in Farnborough, Harlow, Seahaven, Guildford, Godalming, Portsmouth, Southampton, Westcliff on Sea, Southend, Bicester, Ampthill, Reading and Southwold.

The ladies swapped phone numbers and plan to cycle together in the evenings.

Monica Mehers of Bicester Social Cycling said: "Three of the riders had never ventured out of Bicester. They were also very surprised at the quiet through roads there were. On our return, the ladies swapped phone numbers and plan to cycle together in the evenings. They also plan to join the Wednesday evening healthy cycle that we run."

The region with the highest number of rides was the West Midlands, where most of our Community Cycle Clubs put on rides aimed at encouraging new women from a diverse range of backgrounds to join in. They included: Ashiana, Handsworth Beat the Street, Run Birmingham, Balsall Heath, Saheli Ward End, B10, Share Calthorpe, Sara Park and Joyful Bellas and Fellas CCCs, as well as Coventry CTC Member Group and Warwickshire Ladies cycling group.

Next week on Monday 30 July, there's a Women's Festival of Cycling Evening in Lichfield put on by Happy Healthy Cycling - it includes:

Further north, a women-only Transpenine Trail cycle ride took place in Penistone, with other rides in Nottingham, Sheffield, Liverpool and the Wirral. Cycling UK's Lincolnshire's Women's Group  held no fewer than three rides during the month including a slow 100km one. Cafe Adventure in the in the Peak District led an off-road ride in the beautiful Hope Valley while Wensleydale Bike Club in the Yorkshire Dales put on some free mtb skills sessions suitable for all 'ages and aspirations' every Sunday throughout July.

The Women's Festival of Cycling for 2018's grand finale will be the Wirral Celebration Rides on Saturday 4 August - there'll be a choice of 35, 15 and 5-mile circular routes starting from Wallasey and led by female ride leaders.

So why the need for a festival especially for women?

Women continue to be underrepresented in cycling, despite the activity's growing popularity. The reasons for this are many and complex, and include cultural, social, psychologicial and physical barriers, but the above quotes show that, with a bit of extra encouragement and support from their peers, many are willing to give it a go and may indeed turn into long-term cyclists. While we would hope that women feel able to join in any mixed group rides where possible - and in fact, we have a wide range of 'female friendly' options also available -  women-only rides feel like 'safe spaces' in which the less confident are able to ride at their own pace while others also enjoy their convivial atmosphere. The festival highlights the fact that women can cycle too - with the Tour de France in full swing, it's easy to form the impression that it's an extremely difficulty activity solely done by the archetypal MAMIL (Middle-Aged Man in Lycra) - whether they are wearing cycle-specific clothing or any other kind of attire.

Cycling UK hopes that once the festival is over for another year, many of those that have been out on these rides, as well as many other women of all abilities and backgrounds, will continue to cycle for the sake of their health, both mental and physical, their sense of freedom and adventure, but, just as importantly, because it's fun! Here's to another successful event in 2019. We'll be adding to and improving our current offer for women, adding further resources and increasing their visibility in cycling. If you'd like some help putting on or organising rides for women, please get in touch with us.

Many many thanks to all those who organised, promoted and supported these rides - we hope you enjoyed being part of the Women's Festival of Cycling 2018 and look forward to seeing you again in 2019! 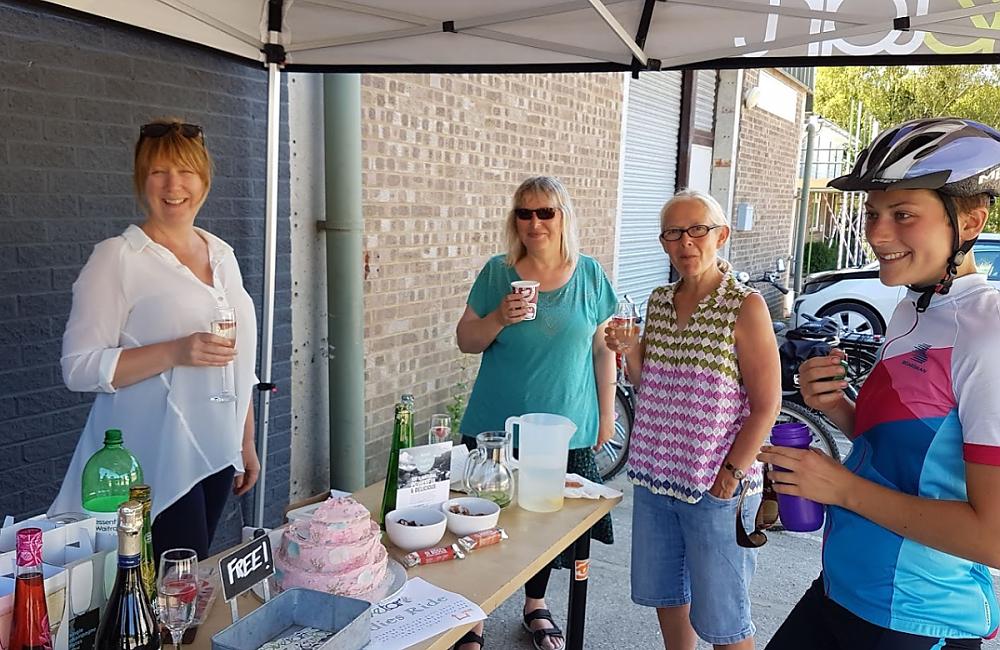 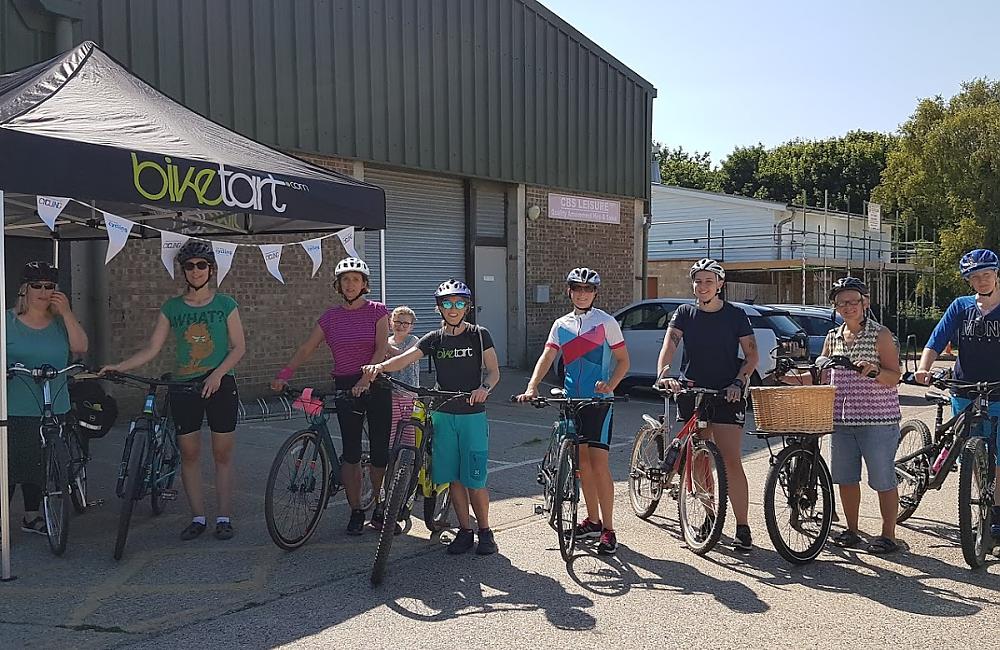 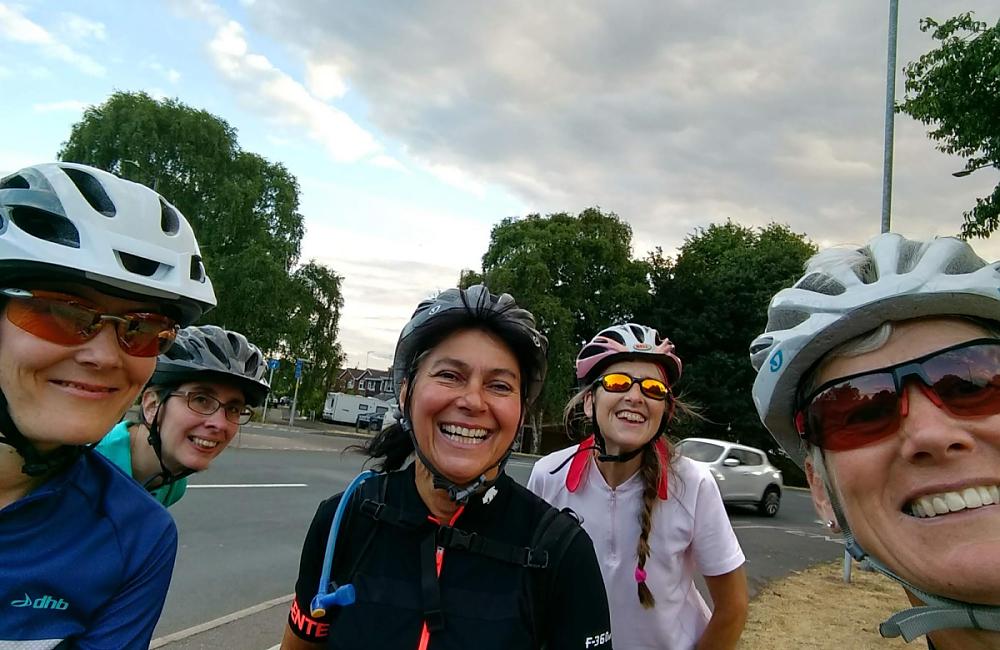 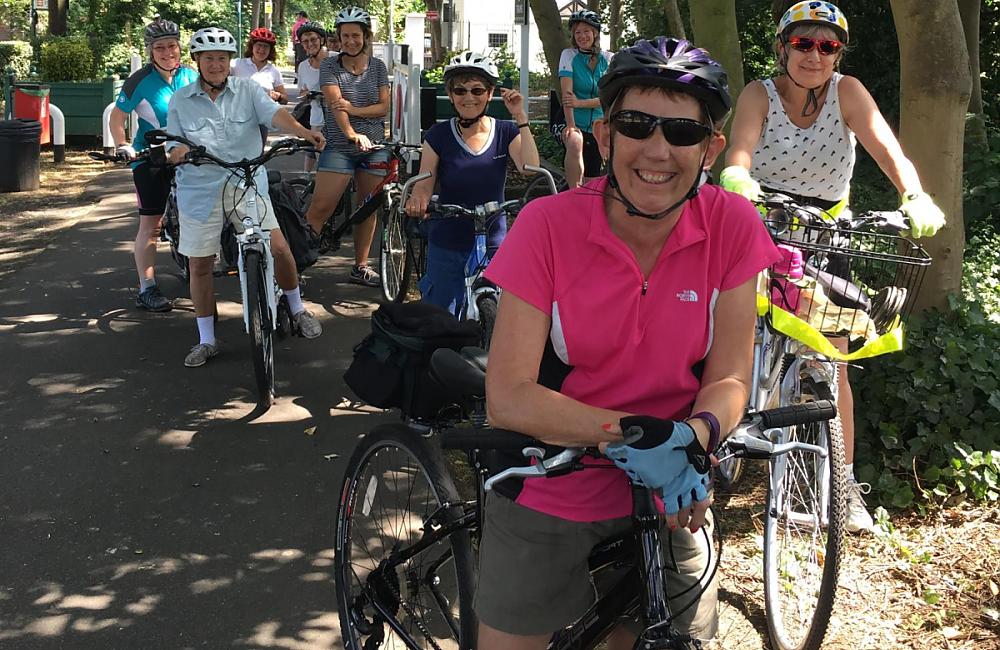 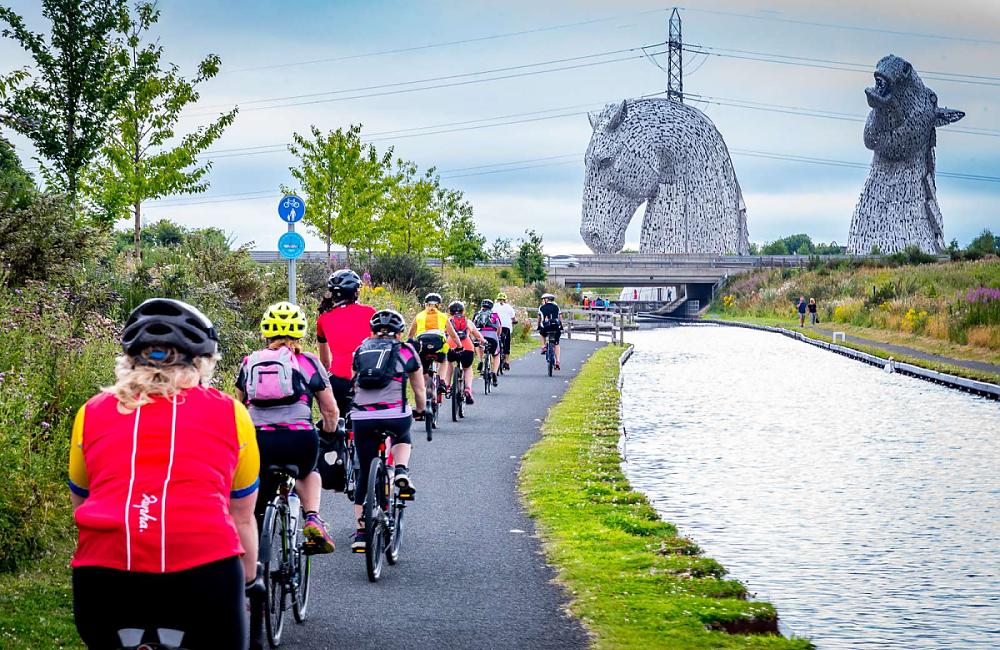 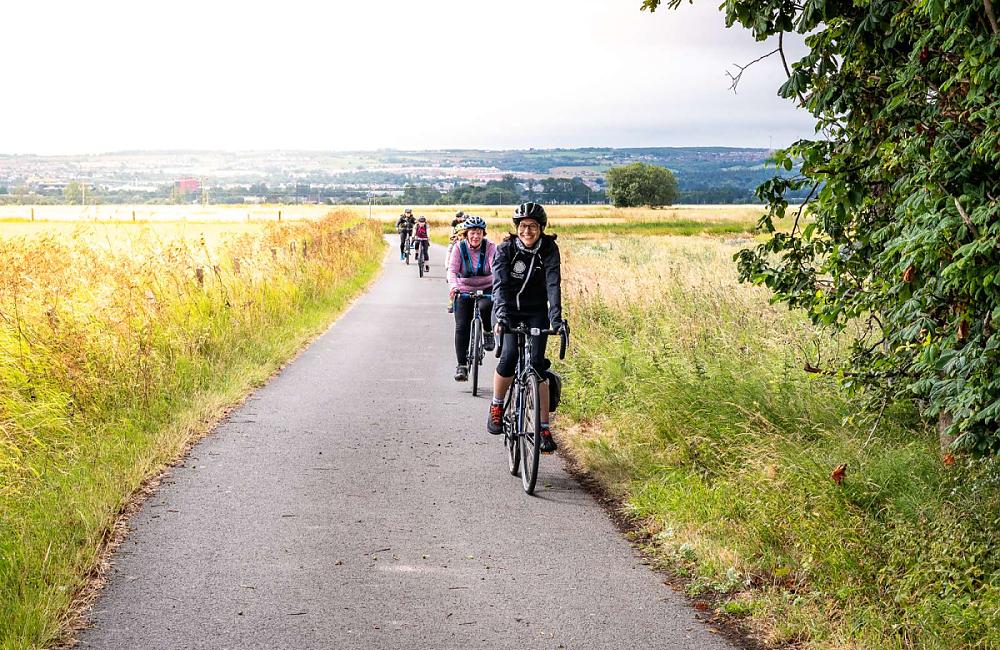 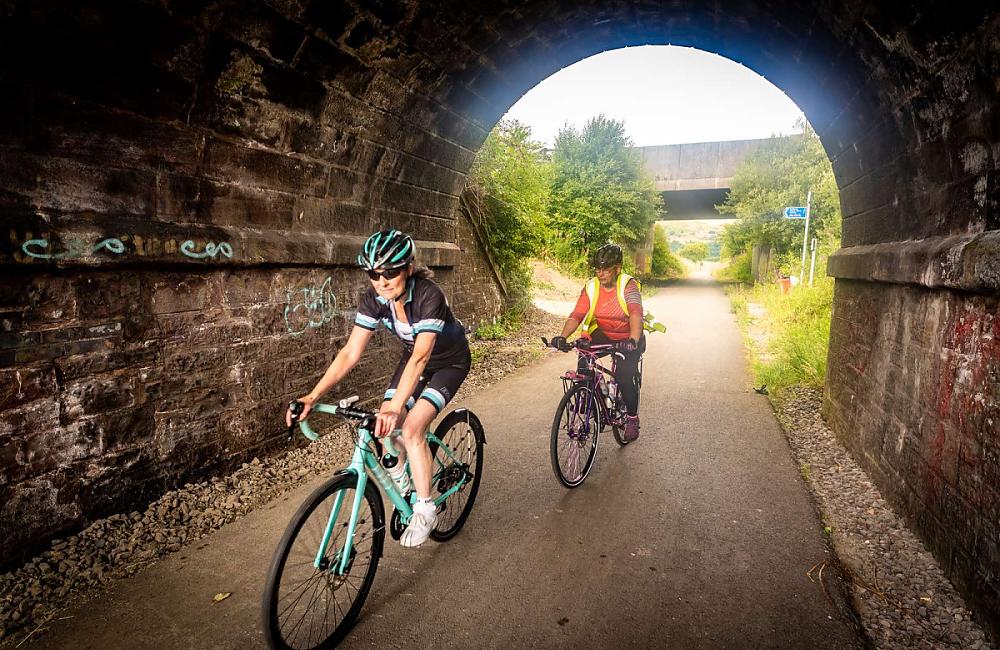 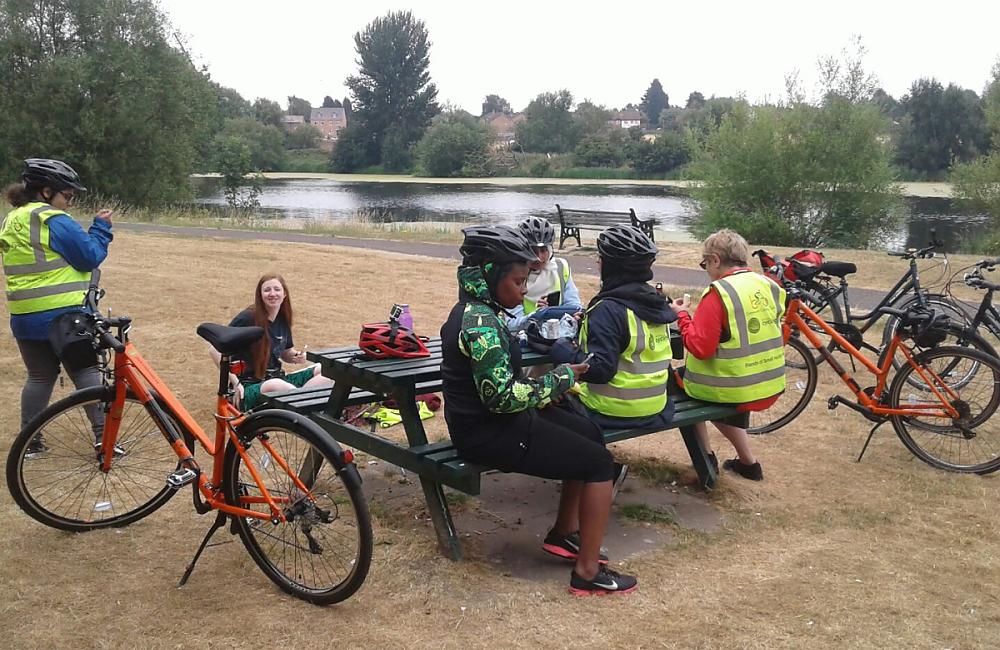 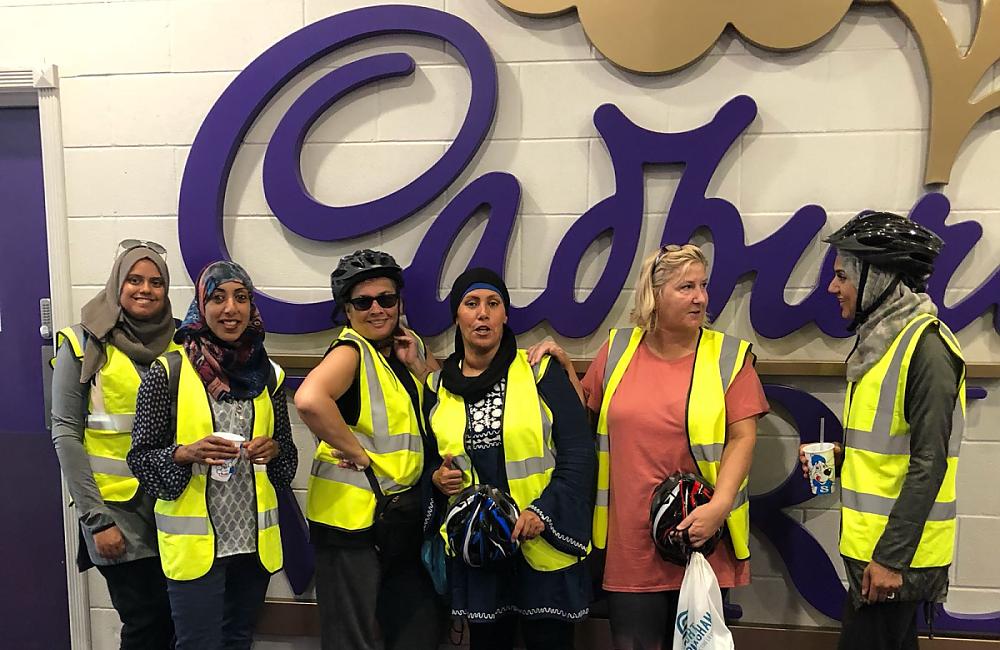 Wirral women's cycling celebration View
You too can champion cycling in the UK
Give your support today to help Cycling UK’s charitable work tomorrow. We double every pound you give through other sources to help change lives and communities through cycling.
Volunteer now