A very sunny Shelley Ride for the Women's Festival of Cycling
By Victoria Heywood
Tuesday, 31 July 2018

Shelley Bike Rides, a historical cycle ride to learn more about Horsham’s own Percy Bysshe Shelley was part of the Women’s Festival of Cycling.

The group was led by Cycling UK member Thea Bredie Turnbull and local MP Jeremy Quin helped by greeting the group and discussing the joys of local cycling and where improvements could be made in the town.

It was then time to find Shelley history. The Heritage Sundial made a good starting point for the group, setting the scene and showing an image of Shelley and a cat, plus the full text of his earliest surviving poem, ‘To a Cat in Distress.’ It also features a quote from Shelley’s ‘Adonais’, an elegy for John Keats: “The One remains, the many change and pass.” 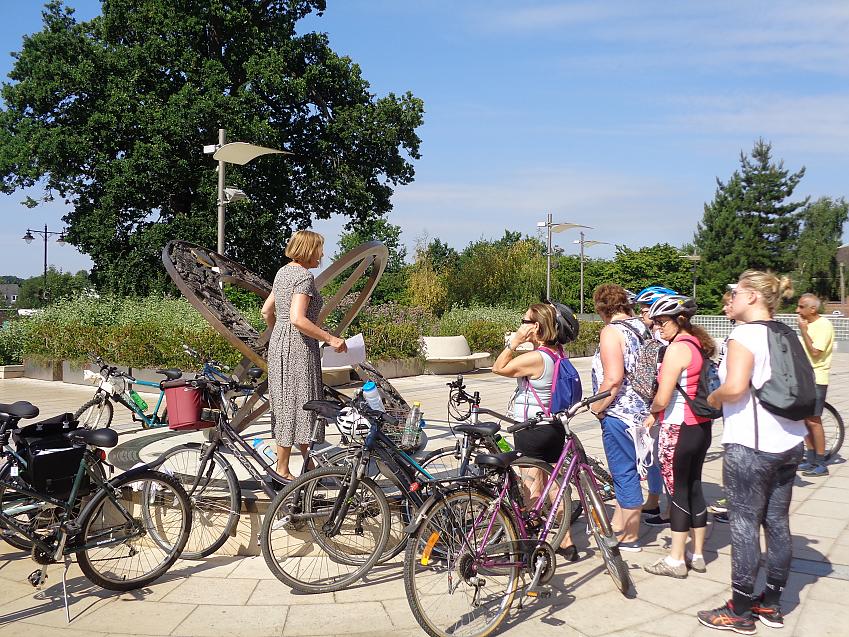 Gathering at the Heritage Sundial

Thea explained, “We then walked to the path alongside the Forum and cycled to the Causeway, the only street Shelley would probably recognise if he could see the town as it is now. We stopped briefly in the shadow of a beautiful old tree in the Causeway, and mentioned some of the local buildings with a Shelley connection, including the museum, St. Mary’s Church, the former town hall and the former King’s Head Coaching Inn.

“We had a short cycle ride to Arun House, where Brian and Jill Slyfield kindly invited us into their garden, to see the front of the house where Shelley’s grandfather Sir Bysshe Shelley lived his final years. The poet used to visit his allegedly eccentric grandfather with his father. Brian greeted the riders and showed them a copy of a painting of Sir Bysshe - the original is in Penshurst Place in Kent.

“We then set off for the Riverside Walk section of the ride, heading towards Warnham Nature Reserve. Shelley loved the natural world and was very knowledgeable about plants and animals, and fascinated by water, he could observe it for hours. We had two short riverside stops, sharing poetry, as well as a rather cheeky letter he wrote at just 10 years of age, mentioning the then-famous Horsham gingerbread.” 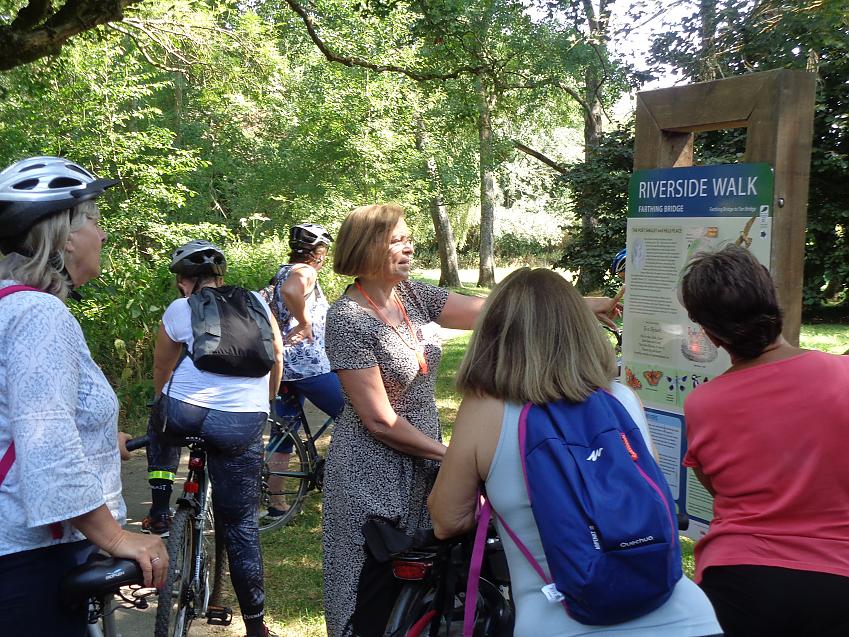 Learning about Shelley's love of nature

The group had been given special permission to cycle across Rookwood Golf Course, before gathering in the café at Warnham Nature Reserve for much-needed drinks and aforementioned gingerbread.

It was a great opportunity to ride the streets of Horsham, really opens up the possibilities around here, and it was good to have the confidence from someone leading you.

Horsham local Jenny Gammon, a novice cyclist, took the ride on with her daughter Bryony and loved it.

She said, “My daughter found out about it. I wasn’t going to go as I don’t have a bike, but Horsham Council lent me one, and I thought it looked really interesting so I gave it a go. It was a great opportunity to ride the streets of Horsham, really opens up the possibilities around here, and it was good to have the confidence from someone leading you.

“The whole thing was really well organised, and it was fascinating to hear more about Shelley.

“It really got me thinking about riding a bike again in Horsham.”

Jenny was so impressed, she and Bryony joined a ride the following week for a 16-mile round trip out to the cycle-friendly café the Milk Churn.

The next Shelley Bike Ride is open to all; it will be on Saturday 4 August 2018, to celebrate Shelley’s birthday on 4 August 1792. Find out more about rides in Horsham and sign up online via the registration form.

Celebrating the start of the Women's Festival of Cycling in Manchester! View