Breathing raggedly, sweat in my eyes, I hurriedly snap a shot of my companions as they roll past in a blur of colour and laughter.

Then, camera stuffed back in its case, I jump on the bike and give chase. My plan to lead a long ride along the North proving harder than I thought. My fellow riders - journalists from Singletrack, Cycling Weekly, MBUK, and the Guardian, as well as Cycling UK’s own MTB star and head of volunteering, Alex Cuppleditch – are all super fit.

Fortunately, they’re not too far head. I eventually catch and pass them, looking for another opportune spot for photography. We’re 20 miles in, still in the Surrey Hills, and I’m already running on fumes. But it’s important to document this ride: we’re on the inaugural ride of Cycling UK’s North Downs Way ‘Riders’ Route’. It’s the last weekend of September and the 40th anniversary of the North Downs Way's official creation. 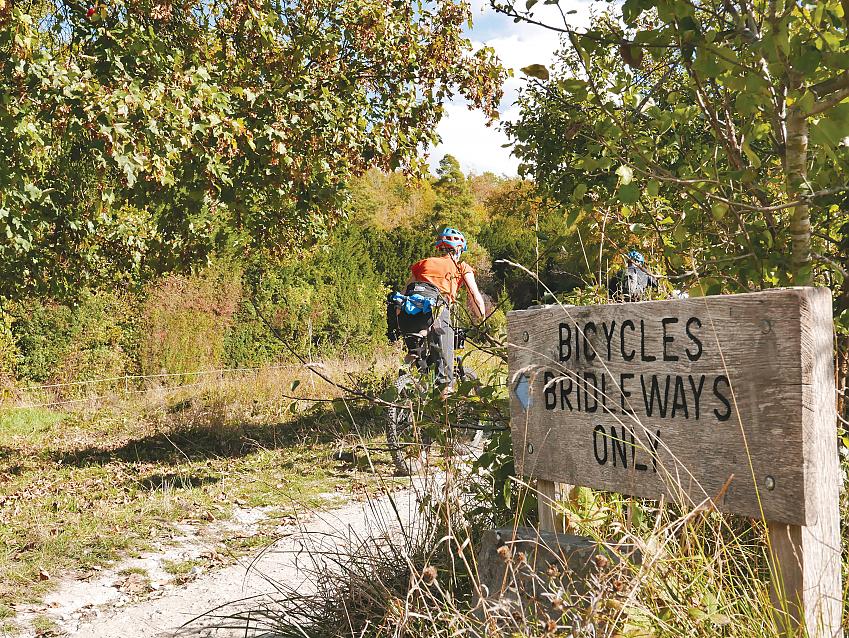 Stretches of bridleway frequently link up with footpaths – effectively dead ends for cyclists.

The biggest difference between the two is that while you can cycle on both, it’s only the South Downs Way that has a route that allows you to legally ride the whole length. On the North Downs Way, there are stretches of bridleway you are allowed to ride along, but these frequently link up with footpaths – effectively dead ends, unless you want to dismount and push.

"I get lots and lots of calls from cyclists – some from as far away as Australia – asking about a legal route on the North Downs Way," says Pete. "Until recently, I had to point out it wasn’t a straightforward exercise, requiring the stitching together of several routes, then filling in the blanks between them. That’s not satisfactory for anyone, least of all me. Now I can point them towards the pilot route tested by Cycling UK, which we’re currently looking into adopting as an alternative, rideable North Downs Way route."

Despite the deviations that our Riders’ Route makes from the walking route, it’s still the North Downs Way. After all, it’s called a ‘way’, not a ‘road’ or ‘path’, and the lines the National Trails take today are fairly arbitrary. Since 1949, when they were introduced into the public consciousness, lines have been inscribed on maps to represent one definitive route for a set trail. But these trails would have been used for hundreds, if not thousands, of years. It’s only natural that they would have changed considerably over time – and even from season to season. In some ways, by limiting them to one line, we’re preventing their evolution.

Nature writer and long-distance walker Robert MacFarlane, in his book ‘The Old Ways’, describes how one of England’s oldest trails, the Icknield Way, which runs from Norfolk to Wiltshire, was probably never a single path but rather "a skein of parallel tracks, sometimes a mile from outer mark to outer mark, following a line of communication made easy by the trends of the landscape."

That’s very much the spirit of the Riders’ Route, developed by Cycling UK’s off-road policy advisor Kieran Foster. Working with Pete Morris and the British Horse Society, Kieran has put together an alternative route that is shaped by the landscape it goes through. In this case, the shaping comes largely through legal constraints due to English rights of way legislation rather than topography.

"The political and legal aspects of upgrading rights of way [i.e. changing the status of a footpath to a bridleway] means the best we can hope for in the short-to-medium term is an alternative route," says Kieran. "Cycling UK has been saying for some time that not all footpaths are suitable for cycle use, but that many are." 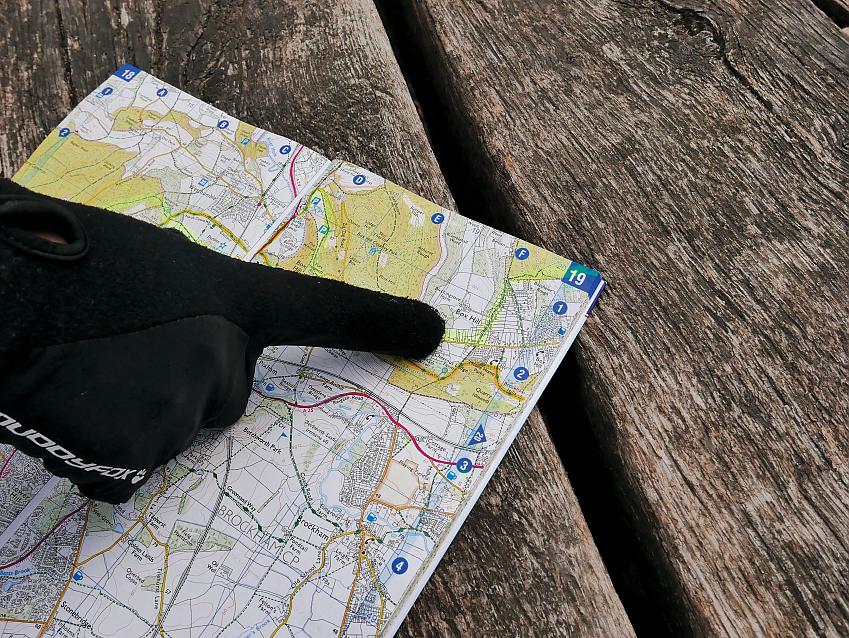 That’s not lost on Pete Morris, who is keen to see safe routes for all the North Downs Way’s users but sometimes struggles to make this possible. "Where we want to create safer routes for cyclists and horseriders, rights of way legislation can make this difficult," he says.

This is most noticeable around Sevenoaks in Kent. The official North Downs Way route continues east from Titsey – as foothpath, for large stretches. With no suitable bridleways to link up with, and busy roads the only alternative, our route diverges from the National Trail. In its current guise, it heads south and then east before rejoining the trail at Trottiscliffe.

"The North Downs Way to Canterbury was a popular pilgrim route, and it’s understood historically that many pilgrims would have travelled on horseback," says Kieran. "Obviously many of the routes they would have used are now driven on, but there’s some irony that horses, and therefore bikes, can’t access much of what we now call the North Downs Way."

There’s another stretch of the Pilgrims’ Way on the North Downs Way that goes through Eastwell Estate in Kent. It’s wide, with plenty of space, and has clear lines of vision, but currently it’s a footpath. On a bike, you have to join a fast stretch of the A251 for about half a mile – although that is one of the areas where there’s hope for a resolution. 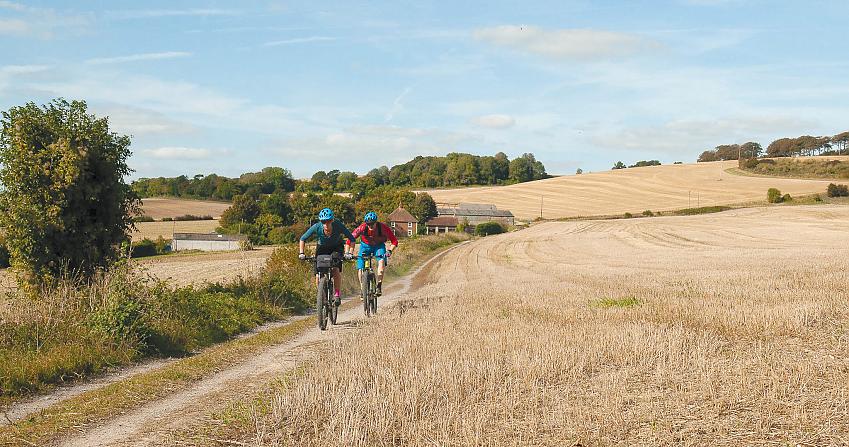 Cycling UK’s existing rideable version of the North Downs Way – our Riders’ Route B-line – runs for 220km between Farnham and Dover. While only 53km of that route is on road, we want to reduce that further. There are several areas where we’re working with landowners and the North Downs Way to open up access to cyclists and horseriders. That would give us our Riders’ Route A-line, with the on-road distance cut to 40km. That might not seem a big reduction but those 13 kilometres include most of the busiest road sections.

What bike for the North Downs Way?

From a rider’s perspective, the North Downs Way is a route of two halves. In the Surrey Hills, where the trails run like veins along the wooded crest, and big climbs and technical descents abound, journalists Hannah Dobson (Singletrack) and Max Darkins (MBUK) were in their element on their mountain bikes. Those on drop-bar bikes were left behind, having to pick their way hesitantly down the steep, root-filled slopes.

In Kent, by contrast, with dusty undulating tracks and stretches of quiet lanes, the gravel bike was king. The ISEN All Season bikes provided by Cycling UK member and frame builder Caren Hartley for Michelle Arthurs-Brennan (Cycling Weekly) and Laura Laker (freelancer and frequent Guardian Bike Blog contributor) fairly flew along, as did the gravel bikes used by Cycling UK CEO Paul Tuohy and Director Matt Mallinder. Interestingly, though, it was only the gravel bikes that punctured on this trip…

Honourable mention at this point must go to local Cycling UK member Peter Cornish. Peter, one of our volunteer photographers, who lent his services on the Saturday and gave a professional touch to the picture composition that I will never be able to manage. Like all our volunteers, his was an essential role, and I cannot thank him enough for the time he spent not just on the day but also in preparation – not least because he helped save my tired legs after Friday’s manic leapfrogging.

As the Riders’ Route stands, and judging by the reaction from everyone, I can say it’s a cracker, with something for all off-road cyclists. Do it in a group with a collection of different bikes and you’ll have an endless scope for discussion on which bike is best. I’ll accept Hannah’s expert suggestion that my Surly ECR running 29+ tyres ‘might’ be the best overall choice for the ride! 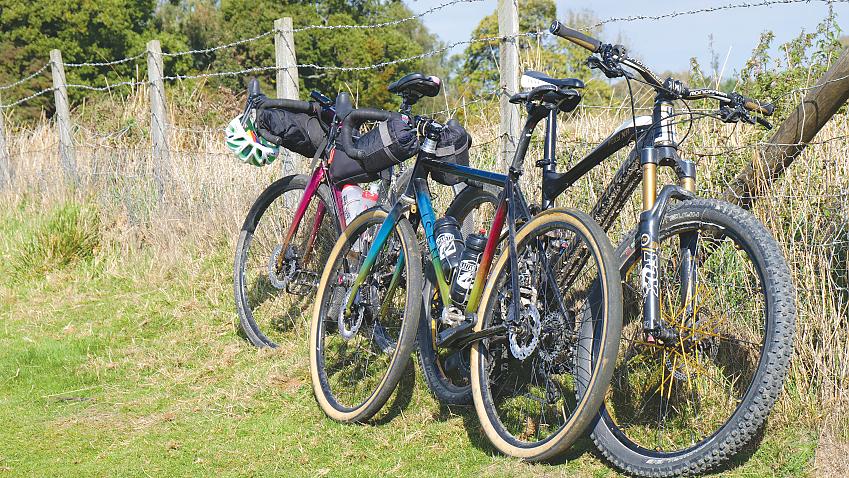 Access issues intrude onto most off-road rides that use rights of way. Any regular offroad rider will be able to describe bridleways that are a shoulder’s width wide and footpaths a peloton could roll along. There’s no rhyme or reason for these decisions – it’s just because this is the way it has always been. Cycling UK aims to change this and help ensure that cyclists in England and Wales can enjoy more than just 20% of our current rights of way.

It’s a long and slow process to increase access – not just in Kent and Surrey but across England and Wales.

That’s why we invited these four journalists to experience the route we created, partly to spotlight the issues but also to demonstrate that Cycling UK is out there, working with landowners and other stakeholders like the National Trails and the British Horse Society to make things better.

One convert to our cause appeared to be Laura Laker: "Challenges like these need solving up and down the country. It’s hard not to believe in the cause, as it’s certainly one fit to capture the imagination."

It’s a long and slow process to increase access – not just in Kent and Surrey but across England and Wales. Our North Downs Way Riders’ Route is just the first step in Cycling UK’s grander vision to see a new National Trail that would allow you to cycle off-road from Land’s End to John o’ Groats. We want to link the North and South Downs Ways to the Ridgeway and make it possible to ride from Dover to the northernmost tip of Scotland, barely touching the road.

We’re confident there’s an appetite for it. As Kieran Foster notes: "Our Rides of Way report (a survey of 10,000 cyclists published in 2017) and our discussions with the National Trails Team both show that there is clear demand for more cycleable routes."

The North Downs Way’s Pete Morris is on board: "It’s exciting to be a part of this bigger nationwide project, helping to develop best practice that will allow many more people to get the best out of the national trails."

As someone working at the heart of it all at Cycling UK, I couldn’t agree more. 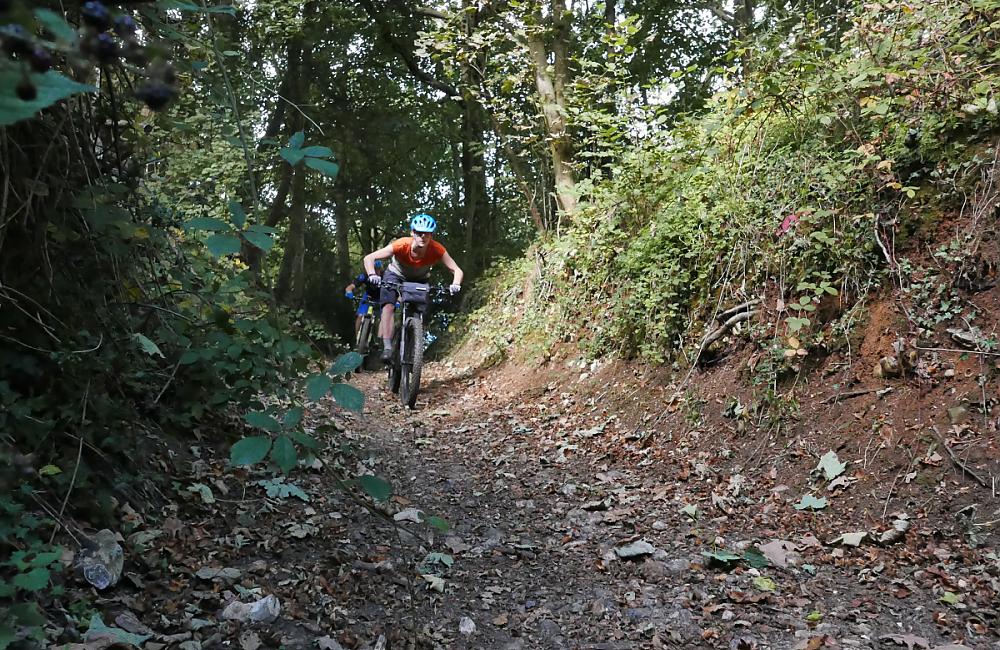 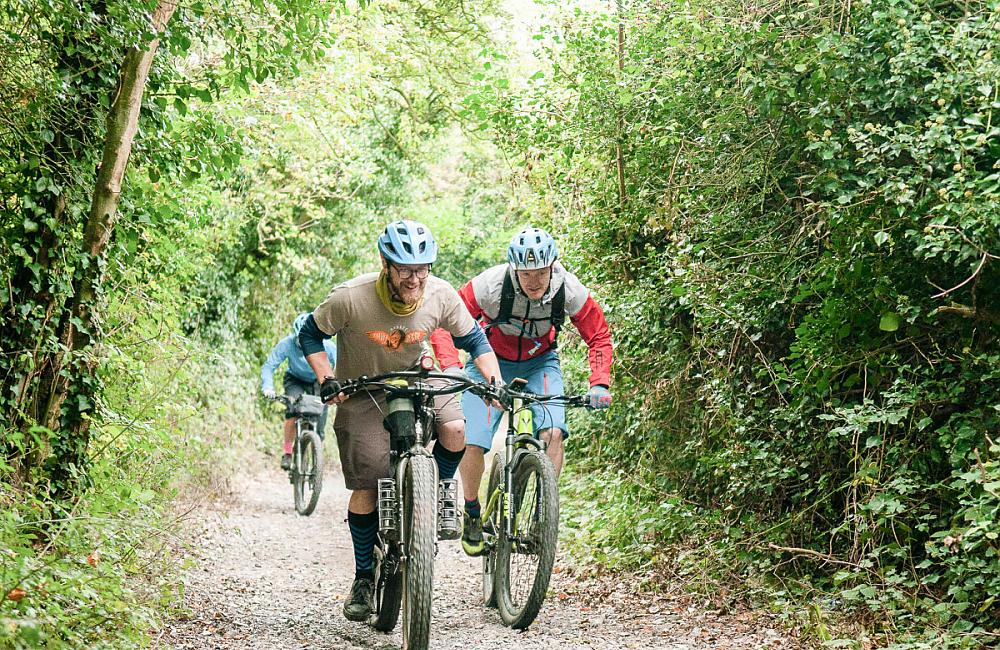 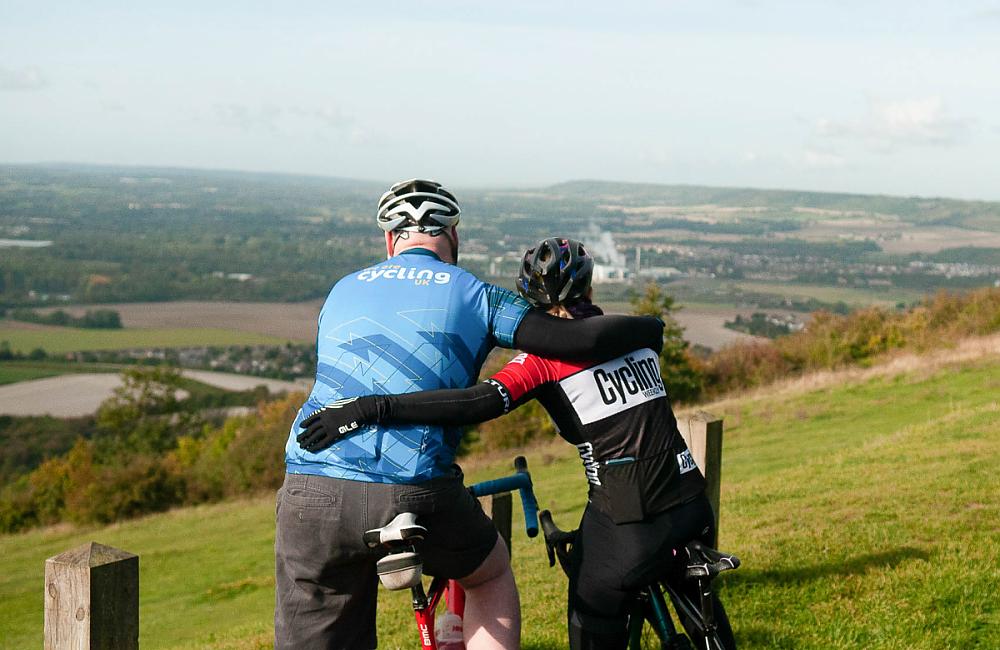 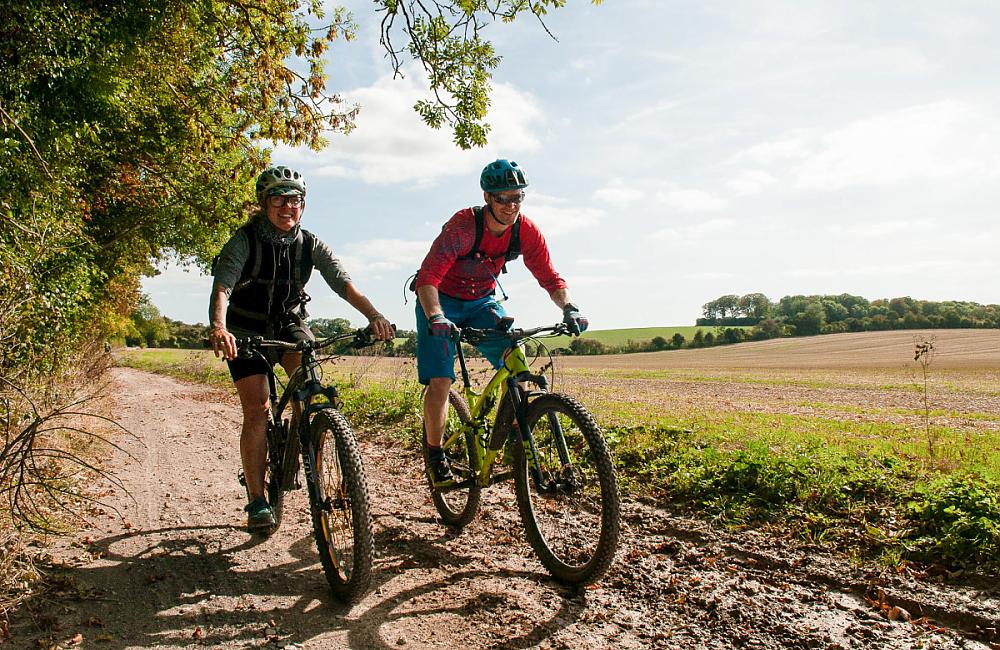 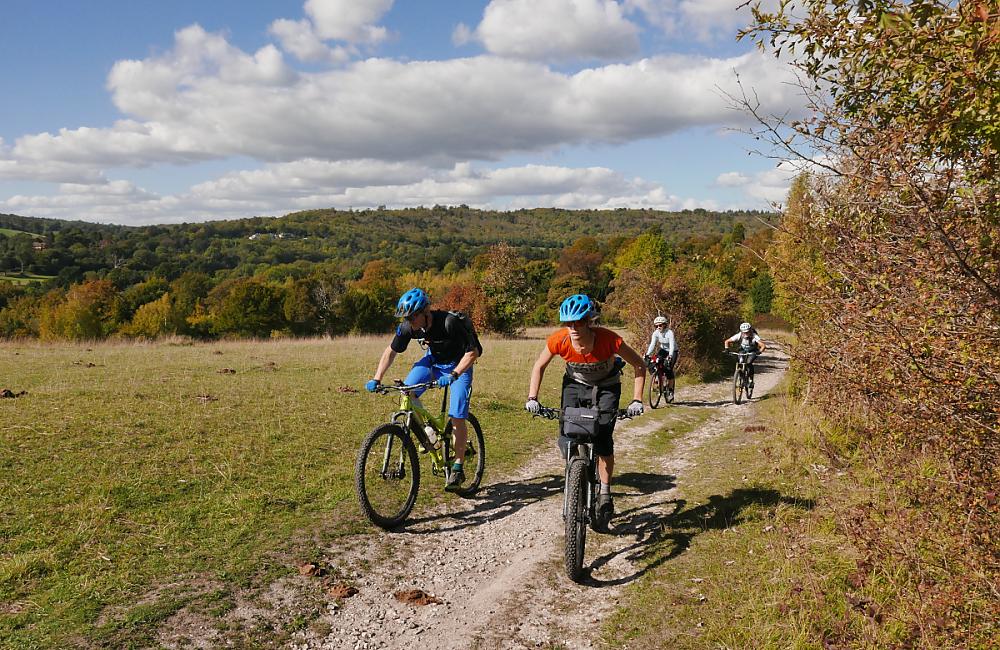 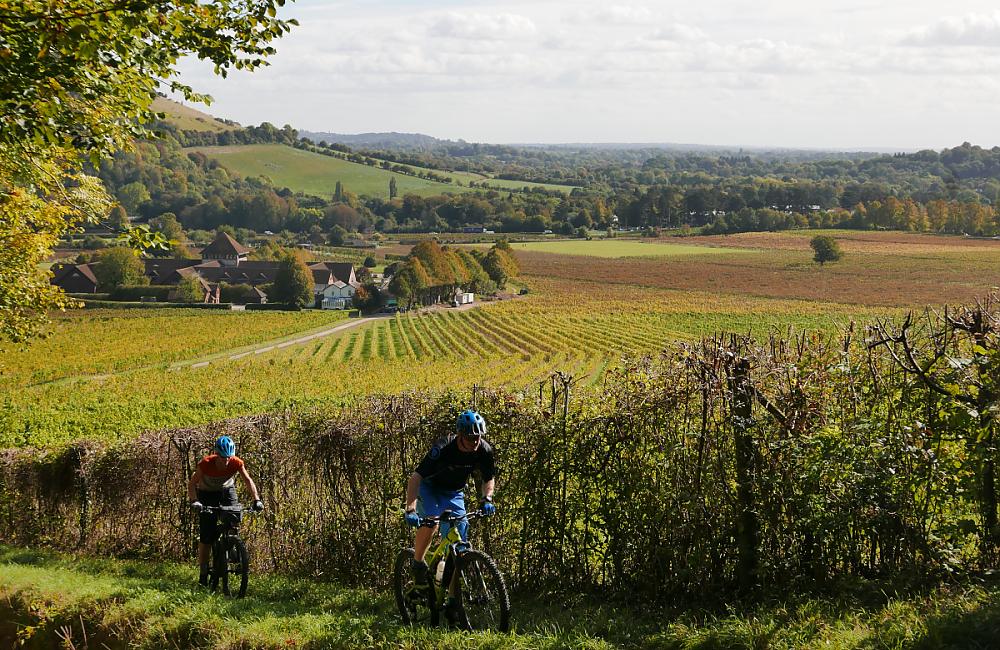 Off-road and Mountain Biking     Great Rides     Beyond the Green Belt 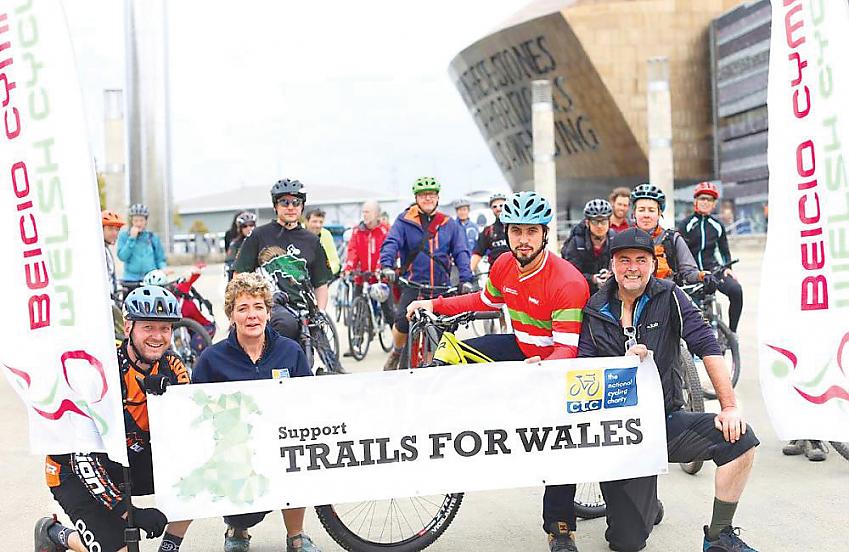 The big opportunities to improve cycle access through legislative change are in England and Wales. Our Trails for Wales and Get on my Land campaigns (the latter in England) have argued for increased access to our rights of way. Cycling and horseriding are prohibited from almost 80% of the network.

There's still a body of work to be done, but thanks to Cycling UK the Agriculture Bill is making the case that public access is a public good, and so landowners could be compensated for maintaining and opening up rights of way. This means there’s hope for positive change in the future.

Until we have legislative change, Cycling UK is working with landowners to create new linked routes and loops using existing rights of way, like in the Surrey Hills.

As part of our Beyond the Green Belt vision, Cycling UK is also working to make our national trails accessible with riders’ routes, like we’ve done with North Downs Way.

We’ve plans afoot for a similar route on the Ridgeway, and also have grander plans for an entirely new trail: an off-road Land’s End to John O’ Groats.

There are 16 National Trails in England and Wales, 29 Great Trails in Scotland, and the Ulster Way in Northern Ireland. While you can cycle on all of these, you’re only allowed to cycle segments and not the whole thing – unless you’re in Scotland or on the South Downs Way or Pennine Bridleway in England. The following five routes are a sample of what’s available.

South Downs Way: 100 miles
Winchester to Eastbourne. The first long distance rideable National Trail that also features water stops and workstands en route. When wet, its mud on the western half is infamous!

Pennine Bridleway: 205 miles
Middleton Top to near Kirkby Stephen. Designed specifically to allow cyclists and horse riders, this is a challenging trail that will take you from the Peak District to the Yorkshire Dales National Park.

North Downs Way: 150 miles
Farnham to Dover via Canterbury. Not an official trail yet, but Cycling UK’s Riders' Route is a tale of two halves, with Surrey perfect MTB territory and Kent great fun on a gravel bike.