The High Atlas Mountains of Morocco are ideal for adventure cycling. Keir Gallagher and Lewis Fox-James saw what they could in a week.

Just as I was getting the camp stove fired up for dinner, I heard the shout above the thundering water: “Keir!”

“I’ve dropped the soap in the river!”

Three days into a week-long circuit in the High Atlas Mountains, and with over 5,000m of climbing already under our belts, this was our first chance to freshen up since Marrakesh. Lewis, my companion on this springtime excursion, had had first dibs. With the soap now bobbing down the Asif Tifnout river towards the Sahara, I waved goodbye to a proper wash.

Leafy trees waved in a dry Saharan wind, which swept over the oranges and reds of the arid landscape beyond

Our tent was nestled between steep valley walls and well hidden among lush greenery. The river, buoyed by meltwater from North Africa’s highest peaks and surrounded, like every watercourse in the region, by irrigation channels, had spread life around it. Leafy trees waved in a dry Saharan wind, which swept over the oranges and reds of the arid landscape beyond the river’s touch.

We were already settled into the touring life. We’d been welcomed to Marrakesh by Pikala  Bikes, a brilliant bike project we’d found on Warm Showers, the online network of cyclists offering places for other cyclists to stay.

Pikala was set up by Dutch national Cantal Baker, who was cycling through the city when inspiration struck. She realised that by being on a bike, with kids joyfully shouting ‘pikala’ (slang for bicycle) as she passed, she’d ceased to be just another tourist and had become part of the city around her. This same transformation from ‘observer’ to ‘participant’ is what makes cycle touring so special, in my view.

Like so many cities, Marrakesh has seen the bike largely muscled out by motor vehicles – primarily coughing mopeds in Morocco. Pikala Bikes is fighting back, promoting cycling by: training local women and men as mechanics and cycle  tour guides; recycling old bikes; teaching their homegrown version of Bikeability; and lobbying for investment. Do visit them if you’re nearby.

We unboxed and prepared our bikes in Pikala’s workshop, then were given a glimpse of Marrakesh’s pulsing heart: the medina. On our bikes, we were led through a maze of alleyways, mosques, hammams, and shopfronts, dodging kids playing football, avoiding battered mopeds, and losing all sense of direction. Eventually we reached the shared house where Cantal, her partner, and other Pikala staff and volunteers stay. 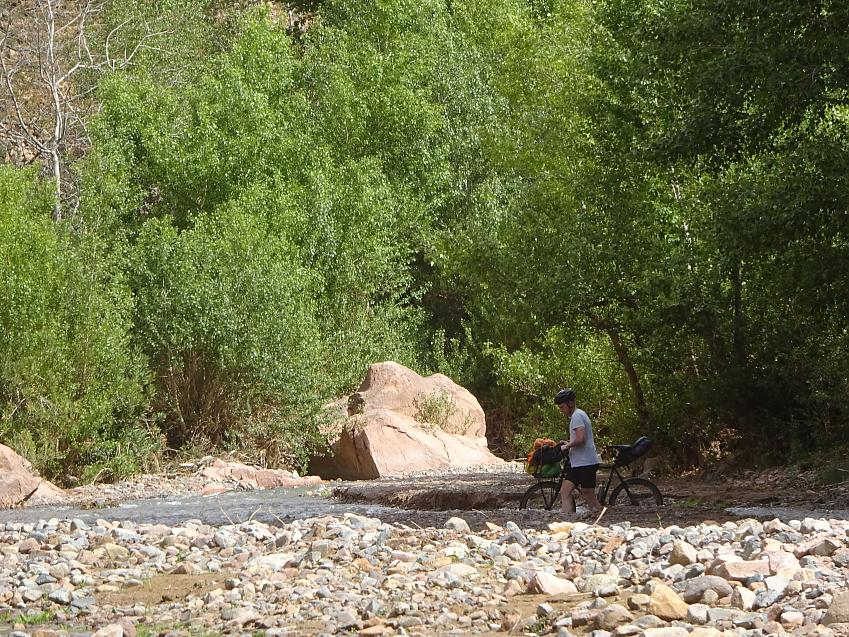 Marrakesh was captivating. Nonetheless we were keen to hit the road, so next morning, less than 24 hours since leaving home, we were riding southwards towards the Atlas Mountains.

We were both buzzing with the unique excitement that accompanies  the first morning of a tour. After the planning and prepping, suddenly it’s all real: luggage on the bike, legs spinning, and little idea of what lies ahead. Freedom.

The noises and smells of the city faded quickly. We were among olive groves and cherry blossom, seeing camels at the roadside and foothills rising around us. Taking the road towards the Tizi-nTest pass, we pitched our first wild camp near the small town of Ijoukak. After that, we turned  eastwards, left the tarmac behind, and entered the Atlas Mountains proper.

Over the next 30km, a single dirt road led us relentlessly up 1,600m to the pass above. As we climbed through thinning air on the steep, rough road, the world slowly changed around us. Chilly air displaced balmy sunshine. The greenery lining the river below grew distant, giving way to reds, oranges and greys of sandy rock. Trees were replaced by struggling, stunted shrubs.

And it wasn’t just the landscape that changed as we climbed. It felt like we were travelling back in time. Motor vehicles vanished, loaded combi vans replaced by smiling women hauling harvested crops on their backs. Cement buildings in the villages lower down gave way to clusters of adobe houses blending into their surroundings.

Eventually the buildings petered out. We completed the final 500m of climbing undisturbed. Vast cloudscapes lay to our west. Views to the east let us survey the landscape of peaks and valleys we were about to delve into. 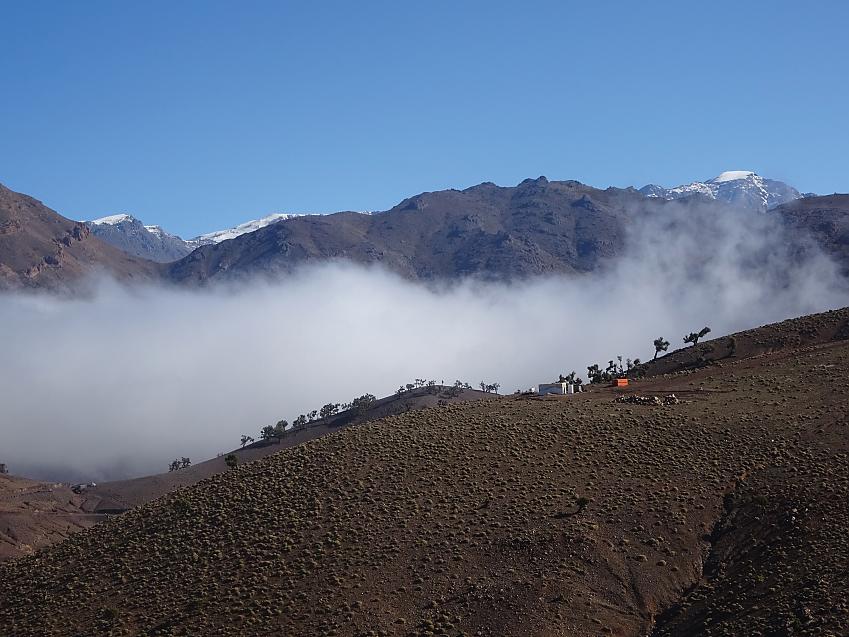 Shepherd's bothies were the only sign of human life

We’d entered a dreamworld of cycle touring that words can’t do justice to. Over the next week we’d keep turning corners to find stunning roads  stretching out into the distance, winding upwards along valley walls. Snow-capped peaks towered in the background. Red poppies fluttered in the foreground.

While the scenery stunned, the people smiled. Throughout Morocco, but especially in the more  isolated stretches of the mountains, we were greeted by friendly faces.

Young men atop passing combi vans; elderly gents on donkeys, faces half hidden beneath woolly hats regardless of the heat; shepherds herding their scraggly goats; all waved and smiled.

Children would swamp the road and practise their French in giggling voices, running alongside the bikes, asking for sweets. They seemed to be enjoying their independence from a young age. We found village stores manned only by eight-yearolds, who would squint at translated words on our phones before a spark of recognition would light their eyes, and they’d run to gather oats, honey, peanuts, or tinned mackerel from the shelves.

We fell into an easy routine: a mid-morning stop for sugary, minty tea; then another couple of hours of cycling before a hearty tajine for lunch – slowcooked meat buried under vegetables, bubbling with spices and accompanied by large flatbreads to soak up the juices. Then we’d ride till evening and find a secluded spot to camp, the setting sun giving way to incredible starscapes.

After four days valley-hopping eastwards, we changed tack and set our sights on Aït Benhaddou, a fortified village on the ancient Sahara-Marrakesh caravan route. It’s been used as a film set for  everything from Gladiator to Game of Thrones.

The turn southwards dropped us lower down  into a different environment. Touching the edge of the Sahara, we entered genuine desert for the first time. Following a collection of rough 4×4 tracks,  we were immersed in desperately dry terrain, horizon to horizon of relentless sun, bouncing back up at us from white sand, without a  sliver of shade in sight.

After just half an hour, we were already overheating, lips cracking and eyes squinting. Having crossed less than 10km of this brutal world, we welcomed a return to tarmac and rolled to Aït Benhaddou, in awe of the 4,500km of desert stretching to the Red Sea.

Taxi for Gallagher and Fox-James!

Eventually, after seven dry days and not so much as a puncture, our luck ran out. Crossing the Atlas once again, we found ourselves caught in a hailstorm that set in to heavy rain. Rivers of thick red mud poured onto the tarmac. Drenched, we cautiously descended through a thick mist, eventually reaching an isolated village with the rain still hammering down. Our elation on arrival  was short-lived. Lewis’ rear derailleur, bent on the flight over, caught in a spoke and ripped in two.

Soaked and freezing, we were invited indoors for mint tea. The village sheik kindly offered to help us solve our dilemma, but we both knew we had no real option. We threw the bikes on the roof of a taxi and headed for Marrakesh. Next time… 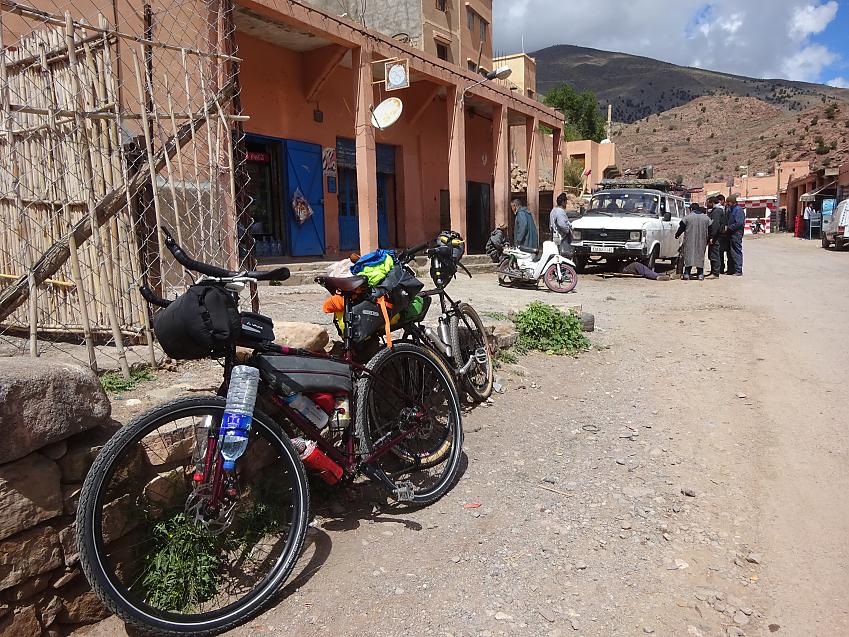 Learn to fix your bike better on a Cycling UK maintenance course.

Do it yourself Getting to Morocco 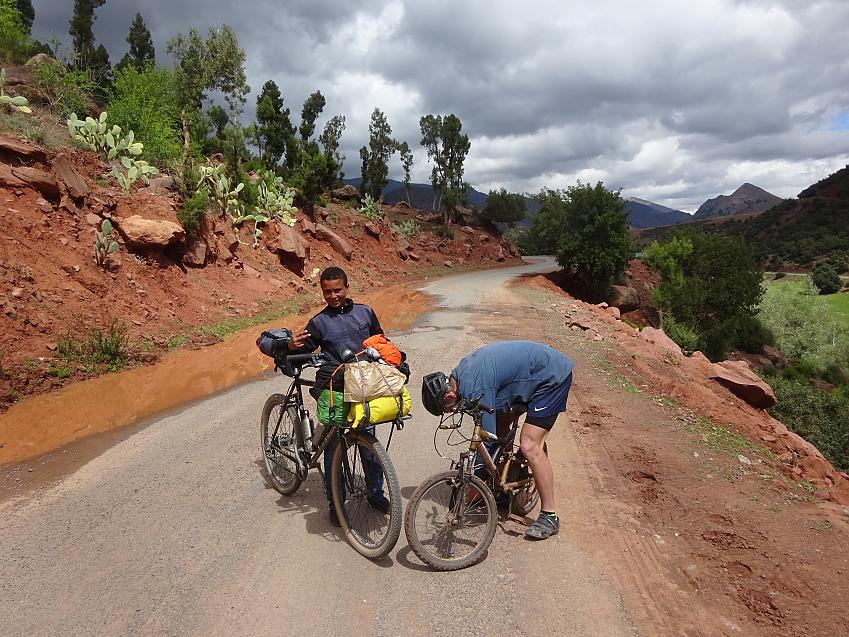