Ecuador Leaving one continent for another on New Year’s Day was a first for me, but a tradition I’d be keen to keep. Myself and my partner Maria Clayfield (100 Women in Cycling 2018) were on our way to Ecuador in search of some warmer weather, a change of pace and some of the best mountain biking planet earth has to offer. Oh and Alpaca, we definitely wanted more Alpaca in our lives.

Our plan was to jump straight in to the wilds of Ecuador using a concoction of two established routes, Los Tres Volcanes and the Trans Ecuador Mountain Bike Route (TEMBR), these routes were initially established by Cass Gilbert. Cass had put us in-touch with possibly the most inspiring family I’ve ever come across, the Dammers. This ranching family of organic farmers and adventurers would be our intermittent hosts and co-creators of the beautifully knitted together routes that meander their way along the spine of the Ecuadorian Andes.

Our plan was to ride out from the Dammer’s farm and make our way to Pintag, the start of Los Tres Volcanes, some 30km south. Los Tres Volcanes is a 415km route that takes roughly five days to ride. As the name suggests the route takes in three volcanoes, Cotopaxi, 5,897m, Quilatoa (a crater-lake formed in the caldera of a now extinct volcano), and finally, Chimborazo, the tallest peak in Ecuador and furthest point from the centre of the Earth, owing to its location on the equatorial bulge, despite being only the 39th highest peak in the Andes at 6,263m. 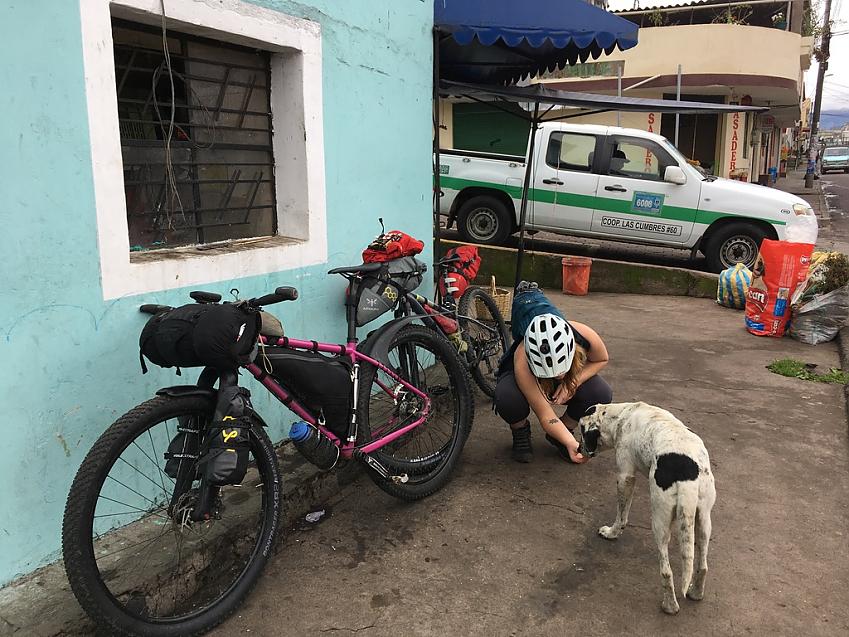 At the starting town for Los Tres Volcanes, Pintag

The Trans Ecuador Mountain Bike Route (or TEMBR) is as described and runs from the Colombian border town of Tulcan in the north, all the way to the town of Vilcabamba, the nearest big town to the Peruvian border in the south. The routes work brilliantly together as they intersect at various points along the central portion of TEMBR.

We climbed mercilessly en route to Cotopaxi national park, we had given ourselves time to acclimatise to the altitude, but as you begin turning your pedals it takes time to accept this new feeling of uncharacteristically laboured cycling. It soon becomes apparent that expectations of distance and height gain have to be adjusted in order to not break morale.

When we entered the national park, we were left open mouthed, the landscape is at a distance, stark, but on closer inspection littered with plant life.

When we entered the national park, we were left open mouthed, the landscape is at a distance, stark, but on closer inspection littered with plant life, some rare, such as the deep red of the Lycopodium Crassum and a huge variety of beautiful wild flowers. These are surrounded with thick, tyre grabbing paramo grasses as well as dusty lunar-like double track with the surrounding area littered with lichen covered boulders of different shapes and sizes.

Our first night was spent at the Tambopaxi lodge, a bountiful refuge nestled just under the towering majesty of Cotopaxi at 3720m. We’d arrived in the midst of a savage thunderstorm, cresting a ridge the air felt charged and it was not the place to be at all, it definitely put a spring in our step as we had a few kilometres remaining when the lightning began in the distance, and the best and safest option was to keep moving and get to shelter. The original plan was to camp in the surrounding area, but when we arrived the rain was still pummelling the now sodden earth and the lightning was still lighting up the surrounding sky so we took the safest and more comfortable option of a dorm room.

After adjusting to our surroundings and acclimatising to our gain in altitude we pressed on, still following the Los Tres Volcanes route through the Cotopaxi national park and out onto the paramo where we encountered beautiful singletrack that wound its way through the green desert, passing through seemingly uninhabited farmsteads, chickens and pigs in fine fettle the only giveaway that there were people close by. Feeling like we were the only two people on the planet at this point we set up our tent outside a small building in the middle of the paramo, a place for Chagras (cowboys) to bed down for the night whilst retrieving cattle in the high mountains.

We continued on the Los Tres Volcanes route until just past a town called Toacazo where we branched off to take in the well-known town of Isinlivi, a quaint town that has lots of visits from backpackers walking the Quilotoa Loop. The next day we made our way to our second volcano, Quilotoa, where we planned to spend a couple of nights to give us time to walk into the crater, canoe in the lake and just generally get a feel for the place. And eat, lots of eating.

After eating as much food as we could and taking in the stunning crater lake we pushed on aiming for a small town called Salinas De Guaranda that we had heard a lot about. It’s a fairly unassuming town, looking run down compared to some we had passed up the road. Famous for its cheeses, Salinas De Guaranda was once very poor, but a visit from an Italian missionary named Father Antonio Polo in the 1970s kickstarted a co-operative revolution, meaning many businesses popped up producing local cheeses, chocolate, textiles and other co-operatives, all producing under the brand Salinerito. We spent another couple of days here refuelling, eating lots of cheese, washing clothes and just generally getting prepped for the final Volcano of the route, which also happened to be the biggest. 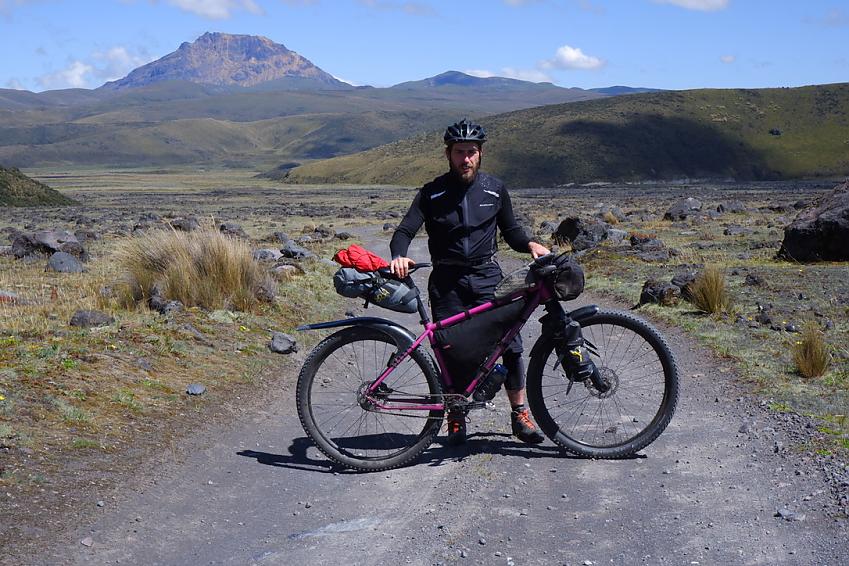 During our time in Salinas De Guaranda the wind had been progressively whipping up and by the time we set off, it was at full force. We were riding up for the next 30km with an altitude gain of nearly 1500m, starting at 3500m to just under 5000 metres at Refugio Carrel. This was a difficult day, possibly made more difficult by the huge wheel of cheese that I had stuffed into my frame bag (totally worth it by the way!).

We opted to sleep in the refugio that night as the wind was still whipping up and the tent had already sustained a pummelling on a ridgeline a couple of nights before we made it to Salinas. However, as there were climbers coming and going every couple of hours for summit bids over 1000m above our heads, it wasn’t quite the restful evening we’d had planned. The landscape surrounding the rufugio is incredible and can only be described as Martian-like, with the surrounding area having a reddish hue. Just before we went to sleep I’d popped out to give the bikes one final security check and in my head-lamp caught the eyes of a Lobo de Paramo (or Culpeo fox) we got stuck staring at each other for what felt like an eternity and then just like that she was gone into the frigid darkness of the night. I tip-toed back up the stairs to bed wondering if the whole thing had even really happened.

With nowhere higher, we only had one way to go in the morning and that was down, a lot of down. And it wasn’t just on a boring track it was lots and lots of down on really nice single and double track, all on the martian-like gravel, we passed so many villages and small settlements it was hard to take them all in, just stunning scenery for mile upon mile, it was heaven.

Before we knew it we’d arrived at the bustling town of Guamote, a well-presented town that had a strong feeling of history to it. The town is shaped by the early twentieth century railway track that runs through it, lined by timber framed balconies suspended off the side of tired looking adobe buildings. The once crucial arterial link is now a living reminder of a busier era, the line is still active albeit for short, overpriced touristic duties. We’d heard rumours of a community run guest house/art project called Inti Sisa which we felt compelled to visit. The space was beautiful and we were greeted with welcoming smiles, it was so nice we decided to stay a couple of nights.

Mid-afternoon the following day we were joined by two more bikepackers, two American guys called Alex and Adam. We’d met them earlier in the trip just before we were leaving Salinas. They were following the tale end of the TEMBR the same as us. Between the four of us we decided to end our riding here and get a truck taxi (Camionetas) to the nearby city of Cuenca. This was our originally intended finishing spot as it had great connections for the journey north back to the capital city of Quito. It felt right to end the first leg of our trip here and spend a couple of nights in a new city with new friends surrounded by convenience.

We’d kicked off our three month trip with a bang, feeling like we’d begun to scratch the surface of what Ecuador and her people had to offer. We’d been met with kindness, smiling faces and alpaca, almost everywhere we’d journeyed and couldn’t wait to start the next phase. But that’s another story…

Conditions: Surprisingly dry for the rainy season, cold in the evenings. Sunny and very, very windy!

Maps/guides: GPX taken from bikepacking.com, back up GPS plus mapping on smartphone.

I’m glad I had… A sturdy tent that was built for high winds.

Next time I would… Take a bigger tent that had more room for kit.

Further info: Water is abundant, but will need purifying. We took a mixture of Chlorine tablets and an MSR hand pump filter

Do it yourself: How to travel there. How to book a place etc… In non-Covid times it’s easy to get to Ecuador flying into Quito from all major UK airports (with a connection in mainland Europe). Lots of accommodation options, with good infrastructure for tourism.