Alix Stredwick, founder of CarryMe Bikes CIC, reviews a cargo bike that folds down for storage

Cargo bikes are awesome for carrying loads but can be awkward to store. To overcome this, Tern teamed up with Xtracycle to create a folding ‘longtail’ cargo bike that can fit in your hallway, a lift, a large car boot – and probably the train.

If you’re familiar with the way the Brompton’s front end folds back on itself, you’ll get the hang of it easily. They say it can fold in ten seconds. It does. A well-placed magnet and an easy-to-use strap keep the top tube and front wheel in place.

My mum (age 70) described the folding mechanism as making ‘the satisfying clunk of an expensive car’. Her slightly arthritic fingers also had no problem pulling back the chunky, user-friendly levers for the hinges. 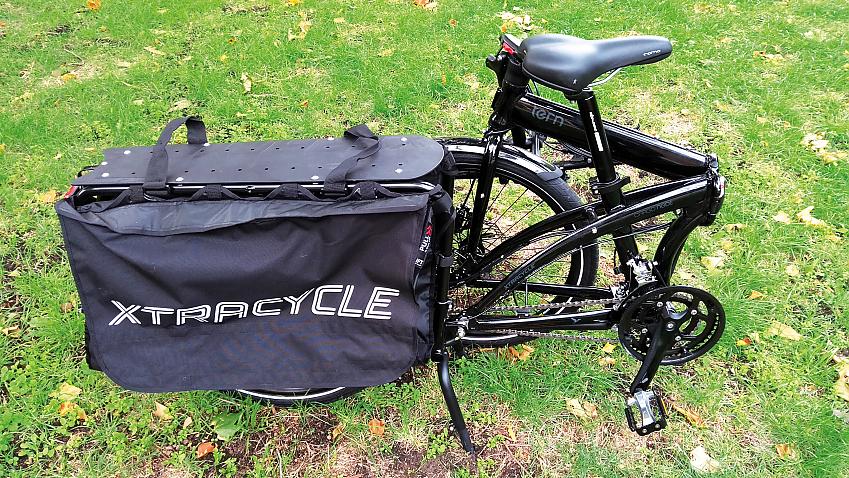 Above: It’s no Brompton, but the Cargo Node should fit in a hallway or big car boot and even pass as a solo bike on trains

The Cargo Node’s maiden voyage was to transport as many child seats as possible for the Hackney Family Cycling Library, which it did with aplomb. The two Xtracycle oversized pannier bags held five child seats using their handy straps, although I still needed to use bungees. With 160kg capacity (including rider), heavier loads than this won’t be a problem.

As a shortish woman (just over the 5ft 2in min height), I found the handling of the bike fully-loaded pretty easy. It’s not step-through but the top tube is quite low. A stand-out feature is the Andros ‘no-tool’ adjustable handlebar stem that creates a convenient range of reach. However, at its shortest reach the wonderful Valo 2 dynamo light won’t shine directly onto the road.

Recently the Cargo Node has been officially approved for child-carrying, but unfortunately I didn’t get to try the compatible Xtracycle passenger rails, seat pads and footrests. A friend who bought one praises the ride as ‘more like an ordinary bike than any other child-carrying bike I have tried’, whilst pointing out that it would be even better if it balanced on its sturdy Xtracycle Kickback™ bipod kickstand stand when folded.

Overall, this is an extremely user-friendly cargo bike, with a price that reflects its quality specification.

20in-wheel longtail that can stand vertically on its rack, creating a tiny footprint. At 15kg, claims to be ‘the lightest longtail cargo bike’. bikefriday.com