How groups in Manchester linked up for the Big Bike Revival

A ride from Cycle Logic
By Victoria Heywood
Thursday, 11 January 2018

How groups in Manchester linked up for the Big Bike Revival

Four heads are better than one, as Chainlink, Tuf*C, Cycle Logic and Longford Park proved when their leaders joined forces for the Big Bike Revival in 2017.

Cycle Logic is a bike shop, Tuf*C is a community urban fitness club, Longford Park is a cycling group, and Chainlink runs mental health drop-in sessions, yet all four of these quite different organisations have one key thing in common; the Big Bike Revival. They participated as a team, forming a local network to great success.

The people behind each of these Manchester-based groups all understand how being involved with cycling has the potential to change lives for the better; from giving people new skills or a new focus in life, to getting them out and about and meeting different people. By pooling their resources and helping out at each other events, they were all able to reach new audiences throughout the Big Bike Revival in May and June last year.

Sean McAdam of Cycle Logic Community, the non-for-profit off-shoot of the shop, explained: “We partnered up because we saw that collectively we could offer much more. For example, here we have an extensive workshop with access to three full-trained mechanics plus a trainee mechanic, so we could offer support to the Dr Bike sessions, the cycle maintenance and puncture parties, either on-site or we could send out our team with mobile racks.

“We could also use the shop as a start and end point for group rides, as its been here since the 1950s and locally everyone knows where it is.

“The puncture parties were a great one, being so hands-on and fun, but also so helpful. It’s of course the number one thing that can go wrong for cyclists. We’d definitely want to carry those on next year.” 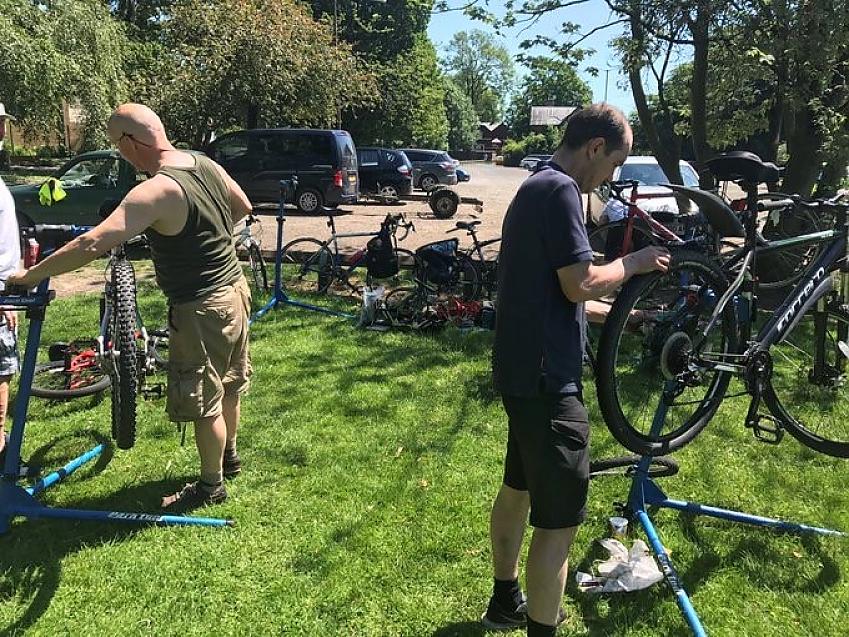 Fixing bikes in the sunshine

Andy Hilton a director at Tuf*C, which encourages young adults in the local community to make better choices, connecting with them through sports and activities. Tuf*C was able to provide the most volunteers for the network’s events.

Andy said: “There was no loss of identity; if anything, the partnership made us stronger. I’m mindful that groups like ours are competing for the same resources and audiences. Basically, it can become a competition, which is to the detriment of other groups.

“Once funding has been decided, we’re better pooling our resources, having the capacity to do more work, having a wider community appeal and being better value for money. Having the shop facilities of CycleLogic was great; to have this huge indoor space for activities when the weather was awful.

“It’s just great to have people on the same wavelength, and be really effective with your delivery and your resources.”

It's a sensible and logical thing to say, Come and join us!

Mark Nesbitt, of the Friends of Longford Park Community Cycle Club, used his connections with local cyclists to drum up numbers for all the network’s Big Bike Revival events. Longford Park’s day out had over 300 participants.

Mark said: “The way I see it is we all want to get to the same place. We have different attitudes and backgrounds but we are all heading in the right direction. I suppose the key thing for me, running a Community Cycle Club, is I’m aware there are people who have different expertise, experience and knowledge. It’s sensible and logical to say, ‘Come and join us!’”