If adopted, proposed changes will finally bring the Highway Code in line with national Bikeability training, which can only be a good thing.

When it comes to cycling, we all know that there are an awful lot of common misconceptions out there, not just amongst people who don’t cycle, but from regular cyclists, too.

No, people who cycle don’t break more rules than drivers, or cause havoc on the roads. No, you don’t need to spend thousands of pounds on a bike to commute to work. And no, all cyclists don’t hate drivers (most people who cycle also drive).

But of all the common misconceptions, especially when it comes to sharing the road, the question of cyclists’ road positioning is one of the most frequent. I couldn’t count the number of people I’ve spoken to, including regular cyclists and drivers whom I’d otherwise consider safe and competent, who believe, with no malicious intent, that cyclists should ride tucked in close to the kerb – and certainly shouldn’t position themselves in a way which may obstruct a car from overtaking.

Of course, nothing could be further from the truth: it’s well established as part of national Bikeability training that there are a range of circumstances when cyclists may choose ride in ‘primary’ position, in the centre of their lane, and many cyclists find this feels safer. And, even when riding in ‘secondary’ position, at the side of the road, cyclists shouldn’t be ‘tucked away’ anywhere, but should be at least an arm’s length out from the kerb. 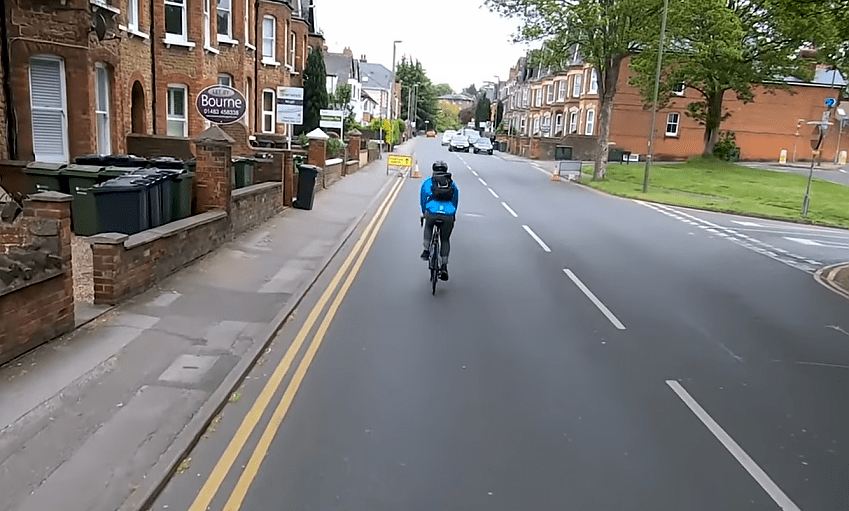 An example of using 'primary' position, with the cyclist taking the centre of the lane.

Primary position is commonly used when you’re travelling at a similar speed to other traffic, or when there’s not enough space for drivers to overtake safely, such as on a narrow country lane with blind bends. It can be – in the right circumstances – an effective way to deter dangerous close passes. By riding out in the middle of your lane, you not only increase your visibility, but ensure that drivers can only overtake when they can safely pass into the opposite (or next) lane – just as they should be doing anyway, especially if the new proposed guidance on overtaking cyclists is also adopted.

The problem is, although the use of ‘primary’ and ‘secondary’ positions is embedded in national Bikeability lessons for cyclists and adopted by many cyclists, it’s never been mentioned in the Highway Code or the driver theory test. It’s therefore little wonder so few people are aware of it, given that Bikeability is currently taught to a minority of school children across the country, usually in year 6 (age 10-11), a full 7 years before they can legally drive.

On the roads, that can – and does - lead to conflict, as some drivers misunderstand why cyclists have positioned themselves in the middle of their lane, at times imagining they’re doing it just to annoy other road users, or thinking they must be ‘bad’ cyclists who don’t know the rules of the road.

This creates a vicious cycle in which many cyclists feel uncomfortable ‘taking the lane’, even if that feels safer, because they’re worried about then having to deal with aggressive drivers, or suffering ‘punishment passes’, where a driver deliberately overtakes in a dangerous manner as revenge for a cyclist slowing them down.

Such aggression is relatively uncommon, but still happens too frequently, and studies show that women in particular are subject to more abusive behaviour whilst cycling than men - likely to be a factor in fewer women being regular cyclists. Improving drivers' understanding of road positioning isn’t going to end that tomorrow, but it may help reduce misunderstanding and conflict, and that’s vital to getting more people – and more people of different backgrounds – cycling.

That’s why we’re delighted that, after years of lobbying by Cycling UK and thanks to the support of our membership, the Department for Transport is now looking to change that, with two new rules being considered in the Highway Code Review – proposed rules 72 and 213. These rules, one aimed at drivers and one at cyclists, explain that cyclists can ride in the centre of their lane when travelling at a similar speed to flowing traffic, or where it’s not safe for a driver to overtake you (see the consultation proposals for full details).

The inclusion of these new rules won’t resolve these problems straight away and, as with all the proposed changes to the Highway Code – they must be followed by an effective and far reaching publicity campaign to inform and educate drivers about the changes.

Equally, let’s not pretend that this will make the 70% of non-cyclists who think the roads are too dangerous to cycle on suddenly change their minds – we absolutely need comprehensive, high quality, protected space for cycling to make that happen.

However, a Highway Code which recognises the importance – and added safety – of primary position is nonetheless a real step forward, and we need to make sure that step is taken. It will inform drivers, give cyclists the confidence to ride where they feel safest (whether that’s primary or secondary) and, hopefully, reduce conflict on the roads.

The Department for Transport want to make these changes – they’ve included them in their own proposals – but they still need to show they have the support of the public. Over 7000 of our amazing supporters and members have written to the Government to support these changes – please add your voice too and help get better rules on road positioning into the Highway Code.

Why the Highway Code should protect riding two abreast View