Was the Senedd 2021 election good for cycling?

Was the Senedd 2021 election good for cycling?

We campaigned, we voted and now we begin the campaign again to make our vision of a Wales where everyone can cycle a reality. With the recent announcement of Julie James as Minister for Climate Change and Lee Waters as Deputy Minister it does look more likely to happen

We had a great campaign for cycling in the run up to the Senedd election in Wales – our first bilingual manifesto, lots of supporter engagement, and an excellent active travel hustings, where politicians from all parties said the thing we all most wanted to hear – that cycling should be for everybody!

This was the first election day for a few years where I haven't been up all night, either at the count or glued to the television, keen to get an early indication of how people have voted and to debate with friends and colleagues about what it might mean.

So, with the count not starting until the morning after, it wasn’t until the end of Friday that we knew that there would be no major changes in the Senedd. With Welsh Labour gaining 30 of the 60 seats, this is as close to a majority as we are ever likely to get with the voting system as it is, and chances are that we won’t see any formal coalition.

For any of you not familiar with Welsh politics around active travel, you may cynically think that the candidates were just saying what they thought we wanted to hear - but I don’t think that’s so.

It was evident during our Active Travel hustings, where two very able and high-profile candidates Lee Waters (Welsh Labour) and Helen Mary Jones (Plaid Cymru) contesting the same marginal seat, didn't disagree on what is needed to make Wales an active travel nation.

Likewise, both Mia Rees (Welsh Conservatives) and David Wilkins (Welsh Liberal Democrats) spoke of their party’s commitment to normalising walking and cycling and supporting people to change their travel behaviour to a more active kind.

With over 100 questions submitted on the night, we missed the one that could have seen some real disagreement – that of road building, but I’ve no doubt that over the course of the next Senedd term this is something we will see resurface.

This genuine cross-party support for active travel means that there probably won’t be much disagreement about the need to build infrastructure, invest in liveable neighbourhoods, support people to become more active in their daily lives, develop a sustainable transport system and introduce a Clean Air Act.

The problem in Wales, is that whilst we have the right intent and some leading legislation, we’re not that good at actually delivering. We seem to struggle with cross-departmental working more than we do with cross-party working at times

What are we waiting for?

So what’s left to campaign for then? The problem in Wales, is that whilst we have the right intent and some leading legislation, we’re not that good at actually delivering. We seem to struggle with cross-departmental working more than we do with cross-party working at times.

As we’ve pointed out previously, the Active Travel Act came into force in 2013 and we still have local authorities who are struggling to create a vision of an active network let alone build one. We have an impressive building programme with 21st Century Schools, but active travel hasn’t been considered as part of their development. Revenue funding is scarce and largely comes from the transport budget, despite cycling being part of the solution to the nation’s health and wellbeing, we’re still waiting for access reforms.

There is no doubt that the appointment of Lee Waters as Deputy Minister for the Economy and Transport has been a game changer for active travel over the last few years and we have started to see improvements in delivery.

We have seen record levels of investment, a new Transport Strategy, plans for the role of a default 20mph across Wales, and the appointment of an independent Chair of the Active Travel Board.

The key question that I and I’m sure most others involved in active travel are waiting to find out is: who will be responsible for active travel? Will it be Lee Waters again? Other key questions include; where will active travel sit? Will it be accorded a high enough priority to see delivery at the scale and pace essential to effect change in time to address the climate crisis?

Will Welsh Government step up and deliver on the promise of Llwybr Newydd: the Wales Transport Strategy. When will the access reforms be implemented? Will they be sufficient to see the countryside open up to many more people? 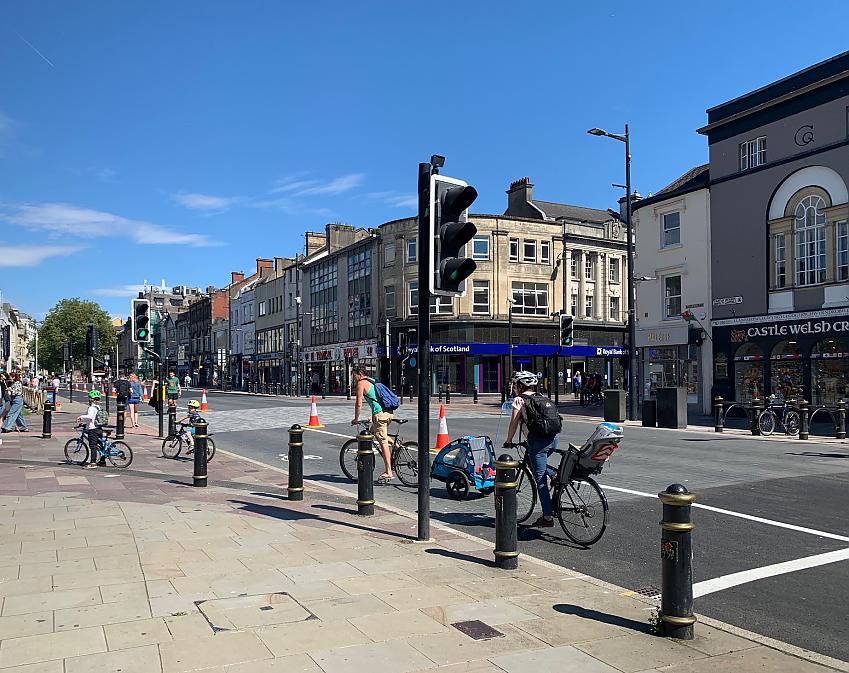 We'll be in touch

Whilst waiting for the answer to these questions, we’Il be in touch with all Members of the Senedd, offering our congratulations and support for the work that we hope that they will do in office and in their constituencies to ensure that investment in cycling is sufficient, that the money is well spent and that it helps break down barriers so that everyone can cycle.

Even though the election is over, our manifesto message holds true: We have a vision for cycling in Wales, a Wales where more everyday journeys are active travel journeys, where our countryside is more accessible, our air cleaner and our health and wellbeing are prioritised.

I’m looking forward to working with the MSs and our partner organisations to make Wales a country where everyone who wants to cycle, can do so. If you want to get involved and help make this happen we'd love to hear from you.

Climate Change is a priority for Welsh Government

Well, it didn’t take long for the re-elected First Minister, Mark Drakeford to announce his cabinet and give a clear indication of the priorities for the new Welsh Government over the next five years.

There is a definite sense of excitement at the appointment of Julie James as Climate Change Minister and probably even more so at Lee Waters as Deputy Minister.

Bringing the environment, transport, planning and housing together under their leadership bodes well for cycling and the other issues that are so critical to the future of Wales.

I’m looking forward to hearing more about how they and the rest of the Cabinet intend to progress over the coming weeks, but in the meantime I’m just going to enjoy the fact that it’s great to end the week with such hopeful news.

Bike Week in Cardiff and beyond View

Choosing the right path to make Wales a cycling nation View
Cycling UK continues to support the UK to cycle
This remains true during this difficult period with the ongoing threat of coronavirus Covid-19
Read our latest advice on cycling
Join Cycling UK to help us change lives and communities through cycling
Membership gives you peace of mind insurance, discounts in cycle shops, rides & routes
Join now