Exploring further afield with the help of an e-mountain bike. Photo by Joolze Dymond
By Sophie Gordon
Friday, 12 July 2019

It’s becoming a familiar experience: you’re sweating your way up a hill, wishing you had a lower gear. Suddenly a someone wearing a shirt and jeans breezes past you with no trouble at all, and even has enough breath left to say a cheery hello.

But while you pat yourself on the back for ‘doing it properly’ and insist that you’ll have earned your cake when you get to the top, at the back of your mind you can’t help thinking it does look quite fun.

It's also pretty useful in the (admittedly not very likely) situation that you're cycling off-road while carrying a hefty supply of camera equipment.

That's exactly the situation that video producer Rob and myself found ourselves in. Our mission was to get some great footage and photos of the first section of Cycling UK's off-road Land's End to John o' Groats route, which will be available in the near future.

The challenge was that several places we were filming were a couple of miles from a road – often up a hill – with a significant weight of kit to carry. The solution: e-MTBs.

We did initially wonder if it would be worth the hassle of remembering to charge the batteries each evening, or whether it would have been easier just to use normal mountain bikes. Having never ridden an e-bike before, I was also a little nervous of how easy they would be to control on uneven trails.

Any doubts vanished when we reached the first hill. The track heading up from Edinburgh into the Pentland Hills is by no means an alpine climb, but there were a couple of steep parts that I would usually have had to push my bike up. When it comes to mountain biking, I’m firmly in the ‘enthusiastic but inexperienced’ category, so some of the rocky inclines looked a bit daunting at first glance. However, it’s amazing how just a little extra boost can help you roll over obstacles you might otherwise not manage.

Our videographer Rob demonstrated this perfectly. Despite not owning a mountain bike himself, by the end of the day he was powering up the hills with a tripod strapped to his rucksack for good measure.

Discovering the e-MTB or ‘sport’ mode was a revelation, as it matches the extra power to the speed of your pedal strokes. So as your cadence increases going up a hill, it delivers an extra boost just when you need it.

Near Todmorden in West Yorkshire we had arranged to meet up with Liam and his wife Heather, who had kindly volunteered to help us out with a few shots. Heather also happened to be riding an e-MTB, which she bought a few years ago so she could keep riding with Liam and their friends without worrying about slowing them down. The constant smile on her face as she rode told me the investment was worth it. 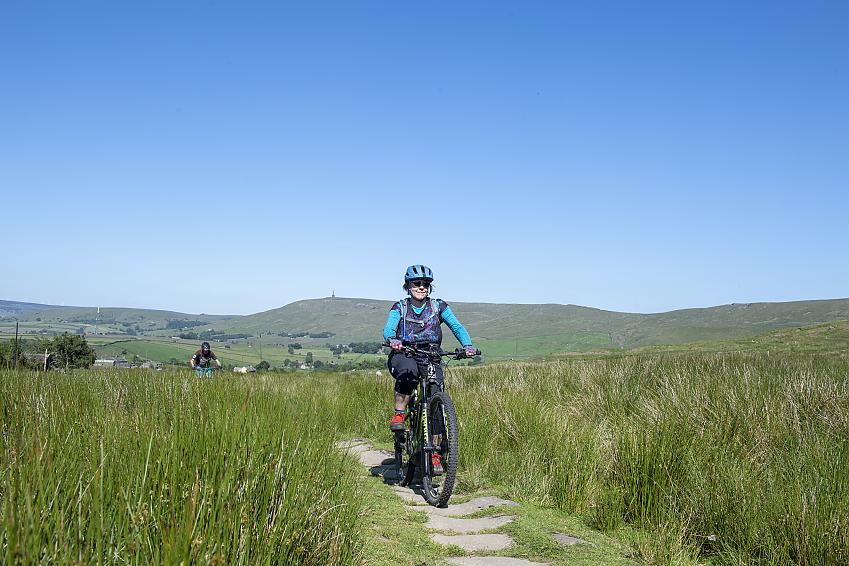 Heather's e-bike helps her enjoy rides with other people. Photo by Joolze Dymond

It wasn’t all easy going though. If e-bikes are enthusiastic going uphill, the weight of them means they are also enthusiastic going down. I discovered this to my detriment when I hit a large bump, the bike tilted sideways and it kept tilting until I was underneath it. Good job I wasn’t carrying an expensive camera at the time…

E-bikes are also much heavier to push up very steep sections, which made us question the wisdom of our decision, although discovering the walk-assist mode did make it slightly easier!

The bikes take four hours to fully recharge, which was fine for our trip as we just charged them up in the accommodation each evening. On the other hand, for a trip involving camping it would require a bit more planning regarding where to charge them along the route (and possibly some leisurely pub lunches). It's difficult to comment on the battery life as we weren't riding continuously or measuring our mileage.

Overall, I think it would be hard to give an e-bike a go and not be won over. It took a bit of getting used to at first, but the feeling of satisfaction from tackling a hill or rocky section that I didn’t expect to be able to conquer was fantastic.

That’s the thing about electric bikes: at the end of the day they’re just really good fun. They let you go further and explore more with people of different levels of fitness and ability.

Personally, I don’t know if I would go for an electric mountain bike, as I find the lighter handling of a normal mountain bike easier to manage, particularly on the descents. However, it’s something you could definitely get used to, and it really made me see the benefits of considering some kind of e-cargo bike in the future.

As for Rob, he’s a total convert to the joys of e-mountain biking – at least I think that’s what he said as he whizzed off into the distance. 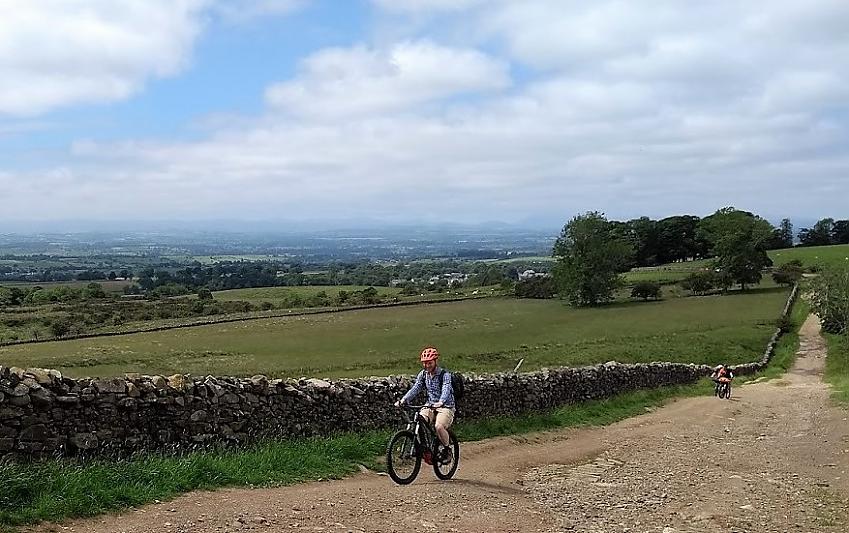