How do you get ready for a long-distance ride like the historic Paris-Brest-Paris? Cycling UK Development Officer, Esmond Sage takes us through the ups and downs of his preparations for the biggest challenge of his cycling life.

Inaugurated in 1891, Paris-Brest-Paris (PBP) is one of the world’s oldest cycle races. That’s ‘race’ in the broadest sense of the term. Most participants are not interested in winning or even making a fast time. Most just aspire to complete this 1,200 km ride within four days, racing only against the non-stop 90-hour countdown and the limits of their own endurance.

My introduction to longer distance cycling came in February 2018 with a 100km  Audax, followed later in the year with my first 200km and 400km rides. Deciding to take on PBP was another challenge entirely, requiring significant preparation, which I’d say falls into four main categories:

To tell the truth I feel a little undertrained! Although the Super Randonneur series that every PBP participant must do gave me a good idea of what I was going in for and helped build strategies for enduring.

To become a Super Randonneur, you must complete a 200, 300, 400 and 600km ride in a single twelve-month season. You come to learn your own regular distance markers where you begin to flag or rebound, and mentally prepare accordingly.

80km tends to be when my legs first begin to question what’s being demanded of them, but they tend to affirm the mission at around 120km. Whatever the distance ridden, the last 80km is always hard, as I urge my body not to give up just because we’re nearly there.

The 300km ride was particularly educational, on a sodden weekend in North Yorkshire. Late in the evening I found myself in a local supermarket, shivering and in despair. Luckily an old hand, Leslie, patiently ushered me through a litany of my schoolboy errors (front light out of charge, no waterproof gloves) ensuring that I finished the course with quarter of an hour to spare. Audax can have a knack for teaching you lessons the hard way, and you come out all the better for it.

What I eat and drink during a ride has perhaps been the biggest learning curve. I was one of those teenage boys everyone justly hates for his ability to eat inhuman quantities of food and remain stick thin.

I’m still mostly that way, and on a lot of earlier rides this led to me eating endless portions of chips, fish, pasta, soup, flapjack, and whatever else was being laid on. I greedily congratulated myself that all my eyes landed on could enter my stomach because it was an audax, so calories were calories, right?

I’ve heard some people quip that audaxes are like eating contests, but it’s not as simple as that. My fuelling strategy was leaving me bloated and gassy, often staggering to the roadside to bring all those unwise calories back up. I quickly realised I had to stop eating anything I liked and pay closer attention to the needs of my own body.

I’m now all about small quantities consumed with care. Dried apricots are my current favourite fuel, which string together smaller light meals often picked up quickly in supermarkets and service stations.

During PBP, many towns and villages rally the riders who pass through with impromptu buffets and barbecues, so hopefully I’ll also get to enjoy some local gastronomy! 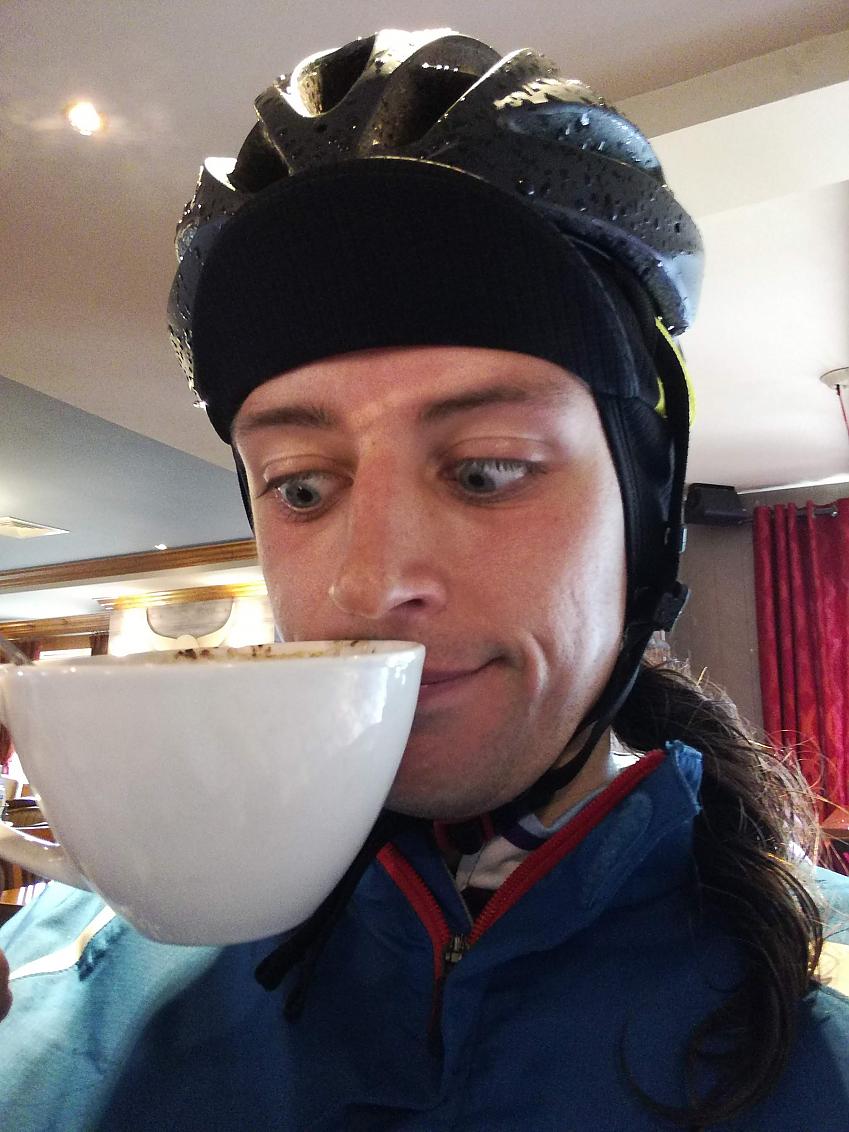 Caffeine can play an essential role on a long distance ride!

Because of its resourcefulness, cycling can appeal to both the technophile and luddite. I lean towards the latter, with a general scepticism as to whether the claims made by any new (and expensive) gear can materially improve my ride as I experience it.

It’s all about less gear that can do more. I ride a Genesis Croix de Fer as an all-rounder bike that will get me round town and country. I’ve fitted it up with an Altura handlebar bag I got second-hand for a fiver at Edinburgh’s Bike Station, and a Carradice saddlebag.

For a long time, my tyres were Schwalbe Marathon Plus, as the most reliable option for contending with Edinburgh’s sometimes dreadful road surfaces. However they were a pain to take on and off, and drew incredulous scoffing from fellow riders who told me that I would not be finishing so near the end if I were riding on quicker tyres.

So, because I really really don’t like punctures, and because I was beginning to weary of finishing audaxes close to time and under stress, I’ve converted to tubeless Hutchison All Seasons. The weight comparison as I did the switch was a bit of a revelation, as was the new speed I was riding at. Not so much marginal gains as substantial. 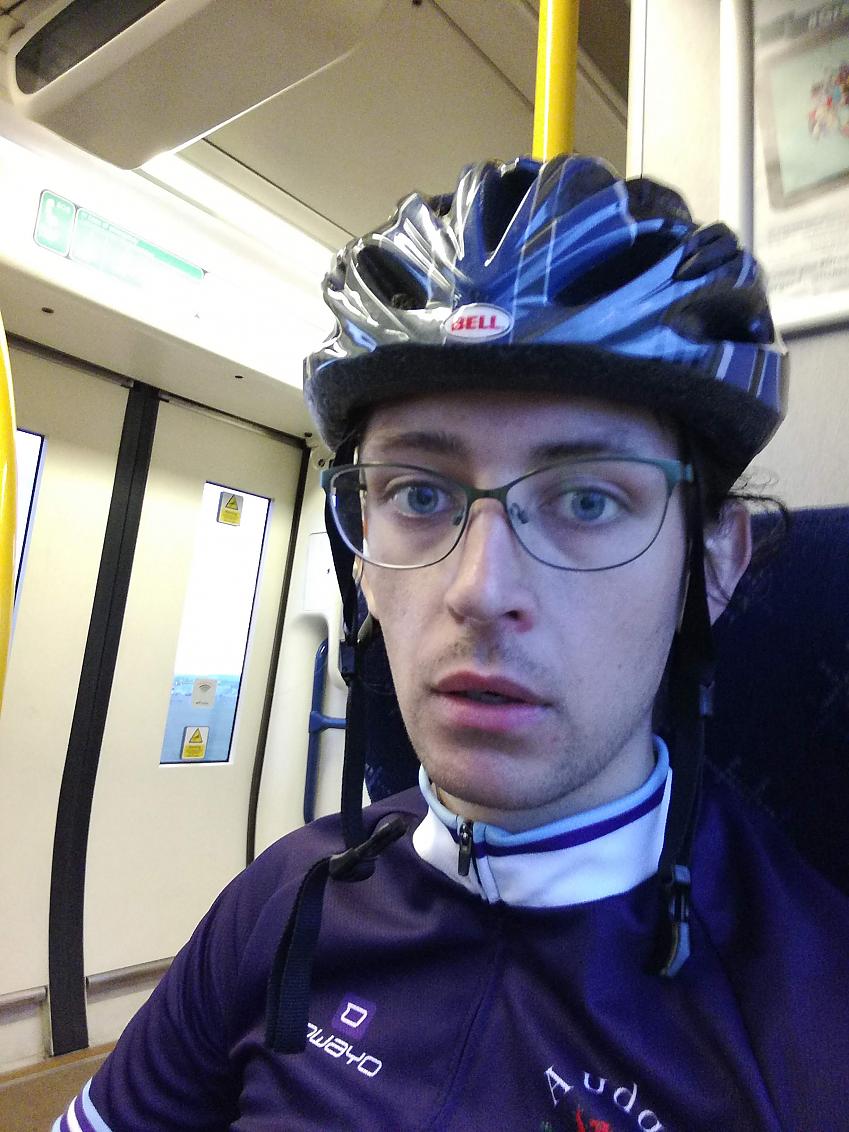 A long Audax can really take it out of you! On the train home to Edinburgh

Rather than fight the despair, bewilderment and disillusionment that can be the darker side of doing anything hard, I try to go along with and vent off some of the madness. It’s a bit like those earthquake-proof buildings, with foundations designed to absorb rather than resist seismic activity.

When things start feeling mad, I go with it. I talk to myself, I talk to trees, I talk to birds, I belatedly shout after the springing deer. I’ll sing over and over and over whatever tune has decided to lodge in my brain (I’ve gone the length of Lincolnshire humming Tom Paine’s Bones, which by the end was more exhausting than the riding).

Or, if I’m luckier, I’ll make a friend whose pace matches mine. We’ll talk a lot or very little, but either way it makes a huge difference to have another person there, who knows the effort and is doing it with you.

As mentioned above, having a fellow rider, particularly at night, has saved my ride, or even my physical health, let alone mental. PBP will involve many hours of riding in the dark on insufficient sleep (why am I doing this again?) and the universal advice is to be sure you have a buddy then, not just for mental wellbeing but physical safety.

We’ve got an article about the Paris-Brest-Paris audax event in an upcoming issue of Cycle magazine.

We’d like to hear from any Cycling UK members who complete the 2019 PBP.

Just tell us about you ride in about 100 words, including your name and a photo of you with your bike.

Send your story to publicity@cyclinguk.org