Esmond Sage is a Cycling UK Cycling Development Officer based in Scotland, he's currently recovering from riding Paris-Brest-Paris for the first time. He explains what is was like to ride 1,200 km in less than 90 hours.

I’m lying in a hotel bed somewhere in the tenth arrondissement of Paris. Sunlight (is it morning? afternoon?) finds a crack where the curtains have been left open.

I can just about watch French daytime television and am staring at a replay of the Pétanque Masters 2019. From standing, the players contort their bodies like blooming orchids and lob their boules into play, landing in thuds and cracks. It’s very therapeutic, the noises could almost be the sound of my back being massaged. I brush some pastry crumbs from the bedsheets and search online for anti-inflammatory foods: berries, almonds, dark chocolate, carrot.

Slowly rising from my bed, I mentally add celery to the shopping list – after all, Hubert Opperman swore by 12 lbs of the stuff when he clocked the fastest time in 1931’s Paris-Brest-Paris.

Paris-Brest-Paris… oh yes, that. I hobble down the stairs from the third floor (oh how I wish there was a lift) and the warmth of the city sun reminds me of my little victory that can never be taken away. I cautiously stride around the block and try to arrange my memory of the last four days into a coherent narrative of events, one thing following another, but all I can summon is a sequence of vivid images cast adrift from chronology and place 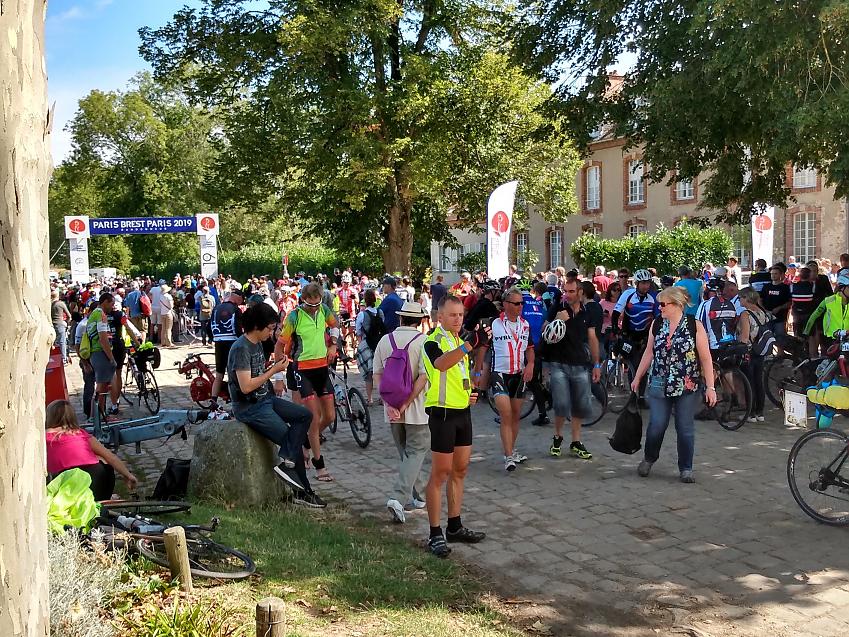 It is Sunday evening and I’m crowded in with the I-group. My frame number is I264, which will become etched on my lips throughout the ride as ‘ee-deux-cent-soixante-quatre, merci’. The letter designates the time we leave, and therefore, the time by which we must get back.

As the days progress, I will examine the frame badges of each bike I pass, hoping to see an I (or perhaps adjacent H or J) for reassurance. These will become less frequent and this I, that is to say, I, will slide down the alphabet.

I’ve spent the last day riding around town getting last-minute supplies and getting my first injuries in. Foreign country; different side of the road; cleats. Relearning how to anticipate stops. A thrice-bashed left knee looks inauspiciously gory but fortunately it’s only skin-deep grazing.

I cycle in front, and I cycle behind. I cycle through the night, the first night, before riders have had a proper chance to break up, and all the way ahead in the vast hedgeless expanse of fields I can watch a breadcrumb trail of red lights warn of one ascent, then another. It’s a cruel fact of light and angle that they can never reassure me of descents. Behind me, I’ve grown an equally long tail of white lights. I imagine Attenborough whispering to me about migrating fireflies. 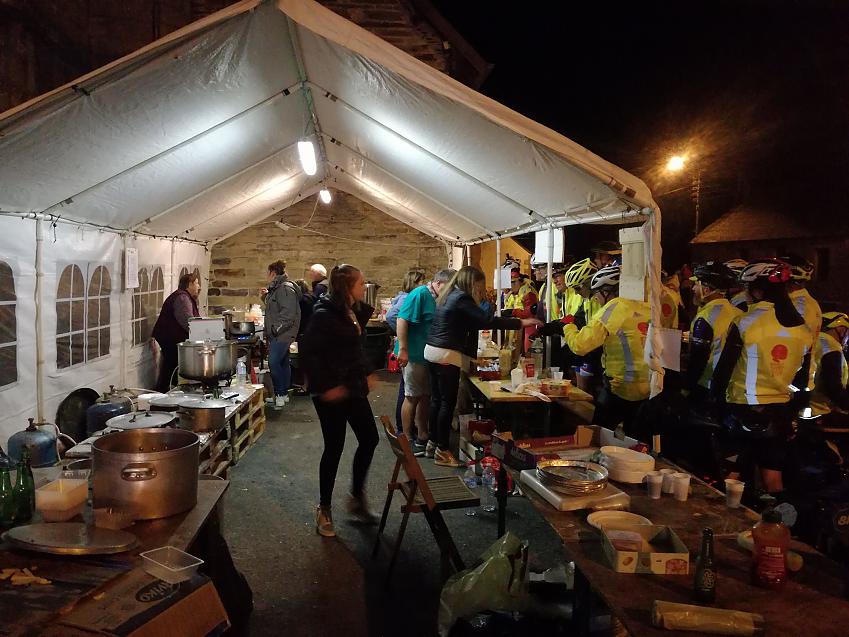 Riding through the night

The night riding is always dramatic. If I had the time in the bank to cycle more slowly through I would. A clear sky reveals Orion rising from his summer slumber to begin the autumn hunting season, and the north star hovers ever to my front-left, giving me the thumbs up and winking (cycle touring idea: heavens-navigation only). Twice, a barn owl slips and dives over my path, and I watch the orange-orange half moon rise. We’re talking Red Leicester shades of cheese.

Things are quite different on the second night. A thick cold fog swamps the hills of Brittany. I cannot see clearly past my handlebars, can make out only the faintest distinction between left lane, right lane, verge, and I push on. I’m freezing, because I naively thought the nights might be warmer in the French summer (they mostly are) and I’ve only got shorts. But this might as well be November.

It’s worse for others – I climb past groups of riders, presumably getting drowsy from the night cold, settling down for naps. In any other event I’d stop and shout ‘What are you doing?’ and pull them from the wet grass and feed them chocolate bars and rub their torsos and get them riding into warmth, but this is a timed test of self-reliance and one’s own decision making. I can only keep cycling and pray into the darkness lit grey by my headlight.

It’s commonly agreed among randonneurs that PBP is not actually a route you would necessarily ride for leisure. This is broadly affirmed in the day riding. The first and last legs outside of Brittany are muscular displays of French agro-industry, wheat field after field after field. The Breton countryside has more charm – I would definitely tour here again, except that it’s very familiar. It’s the rolling pastural countryside that I might find in Devon, or Yorkshire, or the Peaks.

Most of the towns are picturesque and a few are outstanding, such as the fortified grandeur of Fougères, but you can never linger in one place too long.

In the second half of the ride I begin to tire of the mass-produced dinners at control point cafeterias and stop more at local restaurants, which makes for better eating and more chances to take in local life. Because what makes PBP truly special of course is the response from the locals. 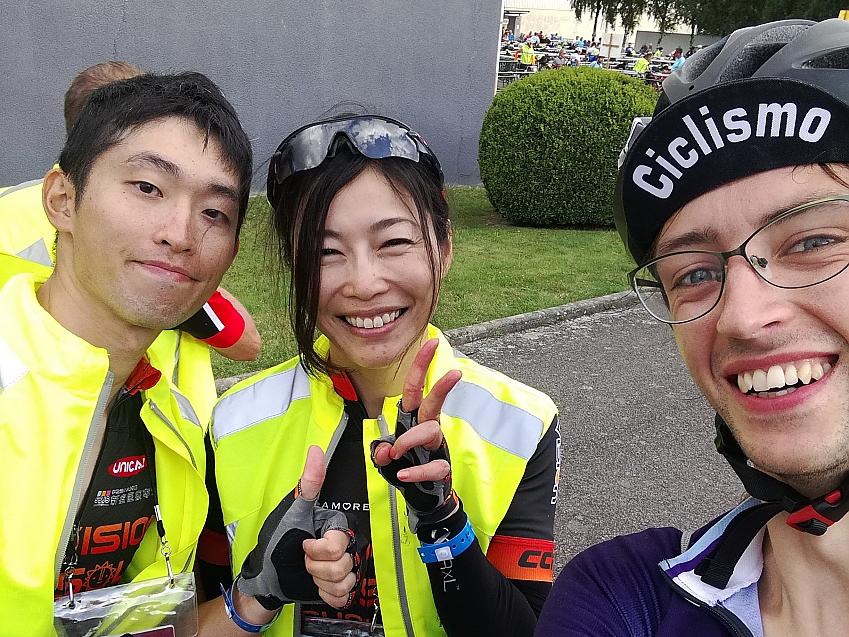 “Bravo!” “Bonne route!” “Bon courage!” These, and applause, are the main sounds from the roadside, and you are never too far from them. By the end they’ve become hallucinations.

Many have laid on spreads of water, coffee, cake, fruit. A few are preparing crêpes. Grandma has come round, the neighbours are there. A day is being made of it, and each cyclist is cheered on and, in the same way you put out a bird feeder, they all hope you’ll stop. The kindest ones aren’t even there, they know cyclists will pass in all hours of the night and have left a table of drinks and sweets lit up by fairy lights from an extension cord.

Despite my growing fatigue, I in fact become fussier as the ride progresses, more sensitive to the visual cues that suggest ideal refreshment. On the last hot evening of riding, with depleting bidons, I nevertheless pass by several eager stalls until I see one with a mint green box – a cooler. The reward for my patience is lemon cordial and a cold apple puree pouch. I scrunch the child-food into my mouth and whoop and cackle my way to the next control.

I received the best hospitality on the last night of riding. It was coming up to about 11pm and I have the runs and occasionally crave the civilisation that comes with a toilet. Most villages have 24-hour WCs, so with some certainty I ask a spectator “où est la toilette?” There is none, she replies, but she is stood outside her house, so invites me to come in. I effuse a thousand merci beaucoups and dash in.

I come back out to find a dining table being filled with bags of raisins, trail mix, and bananas. Though I’m cycling hard to build some buffer time, this is a special act of hospitality that I’ll regret passing up, so I settle down to a quick bowl of trail mix.

Her husband comes in and prepares coffee. It turns out he is the village mayor, and we have a good chat about how the ride has gone so far and what I can expect down the road. The woman has gone out cyclist-catching and has come back with a German in her net. He can speak English, I can speak French, and they can speak a bit of both, and we have a multilingual hotchpotch conversation approaching midnight. 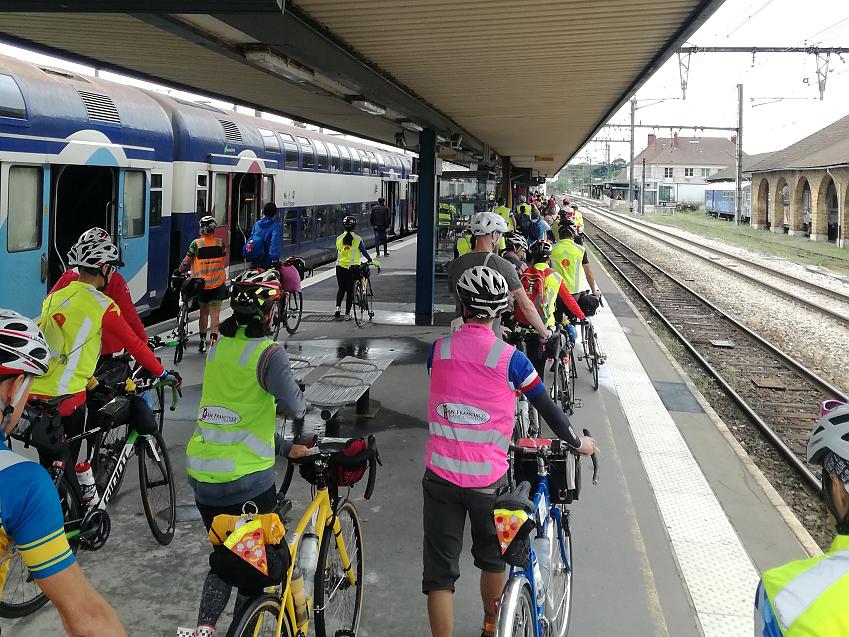 I’m at the penultimate control, Dreux. I have cycled nearly 1200km and there are 35 more to go. For most randonneurs this is the leisurely warm-down. My deadline for Rambouillet is noon and it is coming up for 10. With the complacency of being nearly there and the muddled thinking of fatigue, I sleepily tell myself I can catch a quick nap and average a pace of 18km/h to get there ‘in time’.

It’s perhaps just after 10 when I hit the road, and in time with the easterly sun it dawns on me the risk I’ve taken. A last-minute road closure means the familiar roadside arrows are now diverging from my route sheet, so I lose any sense of my progress.

My Achilles’ heels are burning (they’re still grumbling under their breath as I write this a week later) but I have no choice but to hug my handlebar bag and time trial my way to the finish. I get there with 20 minutes to spare, and just like that, it’s finished. Over the line, stamp the card, 1,200 kilometres done.

I think of all the strangers who have eagerly supported me to do this wonderful, stupid thing and begin weeping.

I lie under the shade of a tree, the heavy medal cooling my chest. I think of all the strangers who have eagerly supported me to do this wonderful, stupid thing and begin weeping. Once the tear ducts have exhausted themselves, my capillaries come forward in the queue and deliver my biggest ever nose bleed.

Fortunately, la Protection Civile is around the corner and give me all the first aid, plus reassure me that my swollen ankles will get back to normal with rest. I don’t need to be told that twice, so I get round the site and bid adieu to the various randonneurs I’ve made friends with along the way, an international exchange of emails and ‘hit me up if you’re ever in town’.

I get on the train to Paris and steel myself for a second ultra-endurance event – French daytime television.

Congratulations Esmond. Excellent article. We spoke briefly at one of the controls on the way back after you saw my Clarion jersey. I had a great ride too and am still recovering!