My night sort-of-bikepacking with a four-year-old

Louis inspects his accommodation for the evening

My night sort-of-bikepacking with a four-year-old

When Cycling UK's partnerships & philanthropy advisor, Felix Hilton decided to take his four-year-old son bikepacking, he looked forward to an adventure with bikes, bonfire and bangers. Although it didn't exactly go to plan, with a little compromise they enjoyed a memorable night under the stars

Bikepacking with a four-year-old, easy.

When I first put this forward as an interesting idea for our #12nightsoutin1year challenge it’s fair to say that I probably hadn’t fully thought through exactly what it would entail. In fact I very much hadn’t. Delusions of grandeur comes to mind, a ‘how hard could it be’ attitude and an ‘if others can do it, why can’t I’ approach.

Hindsight is a glorious thing, albeit incredibly annoying simultaneously, and there was a lot of it entwined in this adventure. However, to be clear, whilst I’m currently painting this as a potential disaster, the end result was far from it.

Travel light; cover about six miles on the bikes but maybe push for a few more; picturesque camping spot; balmy weather; a bonfire with the mandatory marshmallows; a good sleep, bacon butties and a leisurely ride back home for lunch.

This was the picture in my head, and that which I painted for Louis. His excitement was beyond control: we assembled a tent in the living room, role playing as the adventurer and he undertook with unprecedented concentration the task of considering exactly which toys would be most useful on this trip. Quietly to one side however, a lingering sense of self-doubt began to rear its ugly head.

We live in central London, not particularly famed for its beautiful camp sites and, realistically for a four-year-old, not within cycling distance of one either. Not an issue - we could take the train out of London with the gear and then ride from there, I thought.

And so, to the kit. Much to the detriment of my cycling pursuits, the last time I went bikepacking I had considerably less grey hair, far fewer commitments and, most importantly, no children.

The kit can attest to this – the coffin sized tent, the absurdly small sleeping mat, the feather light sleeping bag offering little more warmth than a sheet. Relics from times when sleep was aided by the contents of a hipflask. Not to worry, I had a slightly larger two-person tent and new sleeping mats could be acquired along with a suitable child’s sleeping bag.

As the deliberation over location continued it soon ceased to be an issue at all. The list of what we would be taking had begun to extend past a single page on my notebook into an impressive spreadsheet. This was starting to look more like an arctic expedition than a single night under the stars.

No matter the fine tuning, it was becoming increasingly apparent that the amount of stuff required to make this even a slight success ruled out the bikepacking approach I had envisaged. My kingdom for a cargo bike, or even a trailer - I had neither and the current industry supply issues made sure of the fact that I wouldn’t be getting either as well. It was screamingly obvious that the biking would need to be separated from the packing.

And so it was, the camping would take place on a Saturday night, and we would have a ride the following day. Did this matter to Louis? Not one iota. Happily, I had managed to find a Scout centre close to where we live that had a field in which we could pitch a tent for the princely sum of £5, and we even got the use of a barbecue to boot. Who could argue with that?

To keep in line with the idea of travelling sustainably we opted for the bus and then a short walk up a hill to the campsite. although it felt like an eternity with all the kit (four-year-olds can carry surprisingly little).

It was cool but far from cold and Louis’ concern about the size of the tent was swiftly forgotten once we got the fire lit. There were lots of firsts for Louis on this trip, and I can safely say that the smile never left his face for the whole evening. The enthusiasm as the sausages began to cook was only outdone by the realisation that I didn’t care how much ketchup he put in the bap – no rules tonight, just fun.

There was hunting in the trees for monsters by torchlight, staring at a quite phenomenal full moon, heated discussion as to who was best at getting the jumbo marshmallows the gooiest. Screaming when a bat swooshed past followed by pondering on whether it could have been Batman, and to top it all, the beautiful “coo” of an owl with some hot chocolate. 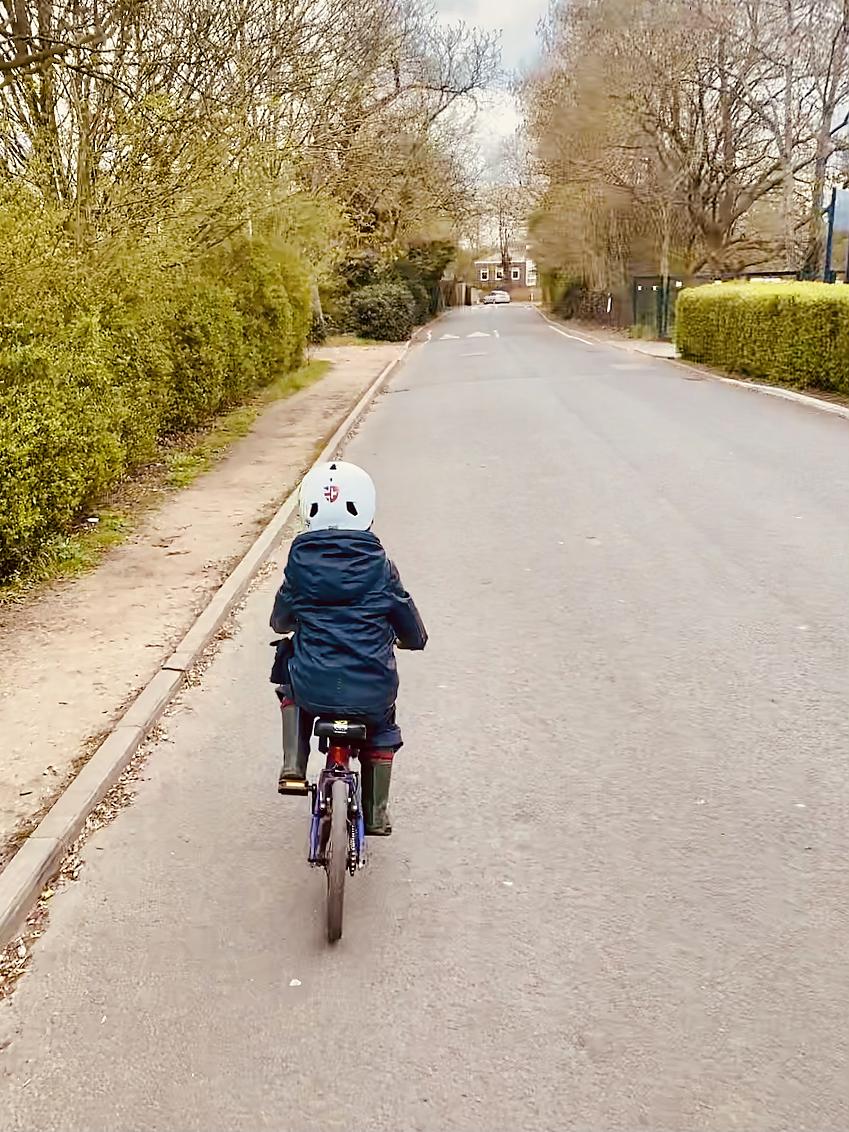 Louis enjoying a cycle ride the next day

Bedtime drew close and the rigmarole of getting changed and into sleeping bags was embarked upon, quite a feat in the enclosed space of our tent. Bedtime stories by torchlight rounded off a fantastic evening.

At 3am: "Daddy, I’m cold", ah yes, perhaps the cheap child’s sleeping bag wasn’t quite suited to early autumn camping. No matter: coats, and countless layers were packed on with the wise instruction of my other half. We slept through until 7.30, which is a good hour and a half longer than he does at home - the revelation.

Breakfast of bacon baps, much like dinner, was eaten with great gusto, and soon we were packed up and back home for a quick dumping of bags and grabbing of bikes. Louis loves his bike, it’s regularly turned into aeroplanes, spacecraft, and bat mobiles. He’s also done amazingly well at getting confident enough to ride on road and fantastic at listening to instructions. We ride to a local park and do loops, only stopping for a juice and a quick feed of the ducks with the leftover baps, eventually returning home triumphant and filled with pride. "Are we adventurers now?" he asks. "Most definitely" I answer.

So did we go bikepacking? No, not really, but I realise in hindsight that this wasn’t the important thing. What mattered was that I had given Louis his first experience of camping and showed him how fun it could be. We’d spent a night under the stars topped off with a lovely bike ride.  The key thing for me? Louis loved every bit of it and, whilst it would have been nice to write how we had bravely ventured out on our bikes laden with kit, we didn’t.

But I now have a boy who is constantly nagging me to go and do it again. A great success to my mind and, perhaps, the very early beginnings of a future bikepacker.

Bikepacking with a toddler View

Guide to what to wear when winter bikepacking View

Bikepacking with your family View