My cycling e-piphany: cycling to work on an electric bike

My cycling e-piphany: cycling to work on an electric bike

Cycling UK's Cherry Allan cycles 13 miles a day along tow paths, bridleways and the road. She'd never thought about, let alone tried an e-bike until recently, and is now hooked.

My e-bike experience came as a surprise. Not so long ago, I wasn’t seeking out e-bikes or even browsing for them idly on the web.

Of course, I’d heard people enthusing about them, some going as far as to say that they could be part of the solution to get more of us cycling more often. But, at the back of my mind - to be frank with you - every time I thought ‘e-bike’, the word ‘cheating’ popped up too.

And then a Gtech City arrived in the office for a review, and I got on it. And it was time for the word ‘wow!’

I am rather older than the UK’s average grandma (a staggering figure you will have to look up for yourself, if you must, as I decline to provide a link).

A grandma is what I am, though. Just. For seven months, to be exact.

My commute to work is 6.5 miles each way, which I cycle completely for eight months of the year. For the other, less clement four, I go halves with a train.

I think it’s fair to say that this classifies me as a regular cyclist, thus giving me the physical fitness of a woman ten years my junior, according to some of my very favourite research.[i] I am therefore as old as the average UK grandma + X – 10.

That said, spring chickens and I don’t have all that much in common any more.

I’m not saying that I resent cycling 13 miles each day. I appreciate the exercise, but there are sections of my route that, after a decade-plus of riding them, have become a chore. And they’re even more of a chore when you’re being baked at great temperatures day after day.

Principally, I don’t find myself smiling along: a lumpy, heavily rutted off-road ‘false flat’ that seems endless when all I want to do is get home; a longish on-road climb up to the office, frustrated by parked cars and irritating, often barging, oncoming traffic; and what would be a pleasant stretch through a park but for the series of rising, uncomfortable bumps in each direction.

I need say no more than this: on an e-bike, these three sections are now a playful joy.

I pedal and, with the quiet whirr of a kindly banshee, the bike takes all the strain, effort and the tedium.

I pedal and, with the quiet whirr of a kindly banshee, the bike takes all the strain, effort and the tedium.

Sometimes, when I’m rocking up at home or the office, I am under the dreamy impression that someone’s given me a lift in a car. And I’m there at least five minutes earlier than I’ve ever been on any of my other bikes.

Yes: I still have to pedal. Not quite so hard, admittedly, but I’m never going to complain about that.

And, thanks to the idea of e-assistance hereafter, I won’t be ditching most of the hours of outdoor exercise I currently do any time soon. I’ve been seriously thinking of resorting to the train for a few extra months each year (or, eventually, all of the time), but I can’t see myself doing that now.

Also, my experience has convinced me that e-bikes really are a practical, not to mention straightforward, alternative to the car for commuting or local travel. Many such journeys are within an e-bike’s battery range, and if that’s not a useful way of upping your physical activity levels, then I don’t know what is.

Yes, in fact for me it feels more like cycling than ever.

On my other bikes (which I still love, don’t get me wrong), I’m slow and my decision making is affected by it.

There are often circumstances when I simply can’t keep up with the traffic, and am more hesitant about manoeuvring than is perhaps good for me.

More pace to my riding, along with the confidence that it won’t ebb away, means that I feel and, I am pretty sure, actually am, a more efficient, in-the-flow cyclist. ‘Taking the lane’ is no longer beyond me.

Indeed, I’m probably less at risk on an e-bike given that, according to research, slower cyclists experience higher rates of ‘near misses’.

Another comfort is that, despite some alarming findings from a 2014 study that implied otherwise, subsequent evidence suggests that, in The Netherlands, “… e-bike and classic bike users are equally likely to be involved in a crash and the severity of crashes are also about equal”.

Try before you buy

Quite obviously, I wouldn’t be this enlightened unless I’d tried an e-bike for myself.

Before that, I was a sceptic. I’d convinced myself – and it wasn’t hard – that these machines weren’t for me.

But they are for me, and I’ve reached this conclusion after trying what is, essentially, a very basic model.

So, trying before buying, which is a commonly on offer with this kind of bike (as it is with the Gtech in particular), makes the best sense.

The bike I tested 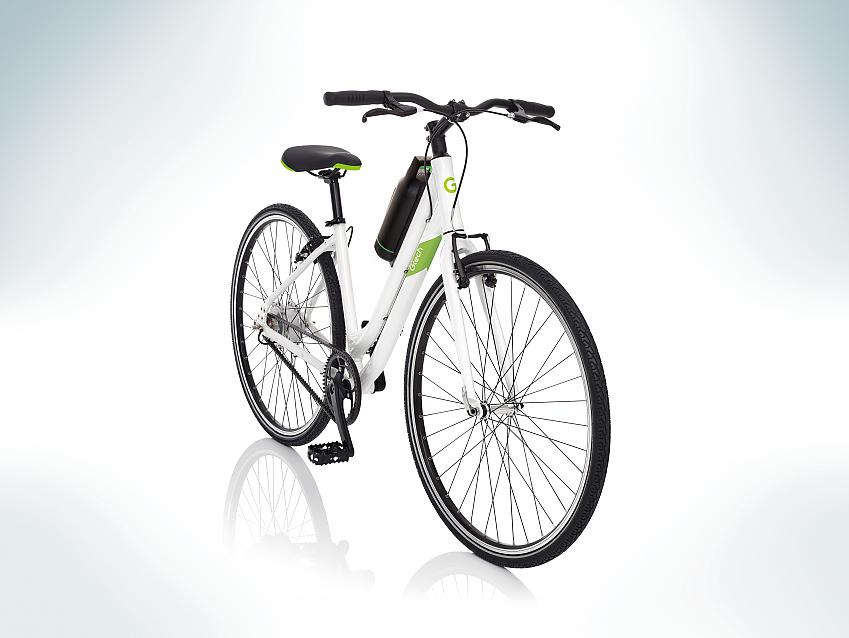 It was a Gtech City.

As mentioned, it’s a basic e-bike. I’d say that its simplicity is one of its strengths, because it makes it such a breeze to understand and ride.

It usually retails at just under £1k. Not only is this a relatively good price for an e-bike, it also puts it nicely within the range of the Cycle to Work Scheme and its tax benefits.

The City is a step-through hybrid, and comes in just one frame size: 17 inch. That proved OK for me (I’m 5 foot), but I usually need something smaller. Other, more sophisticated - and, mostly, far more expensive e-bikes - come in a range of sizes, some even XS.

Gtech also offers a Sports model, with a 20 inch cross bar frame and sports saddle. (The City has a wide ‘comfort saddle’; I’d prefer the sports, but that’s just me).

The battery, which looks not unlike an oversized water bottle, is easy to unclip from the frame and it isn’t too much of a challenge to carry about if you don’t want to leave it unattended on the bike.

It takes around three hours to charge from flat; you don’t have to run it down before recharging it; and Gtech reckons it costs less than 4p (based on an energy tariff of 15.8p per KW) each time. The charger isn’t particularly bulky either, but I kept it at home rather than taking it everywhere with me.

Altogether, Gtech says the battery will cope with 1,000 charge cycles before there’s any noticeable difference in run-time and, if you need a replacement or spare, you can buy them separately (at £299, these aren’t a snip, though).

Its advertised range is 30 miles on ‘eco’ and less than that on ‘max’. Being me, I kept it on ‘max’, which was enough for one and a half entirely reliable commutes (= approx. 19.5 miles).

This meant that I had to charge the battery up every evening. Inevitably, I forgot once, and a very trying and unexpected work-out most of the way home resulted.

The bike is ‘aviation grade aluminium’ and isn’t seriously heavy (and nor is the battery), but heavy enough to notice when the electrical assistance to which you’ve become so luxuriously accustomed peters out.

In theory, though, that should never happen if you’re well organised, apprise yourself of the bike’s limits, and keep a close check on the clear LED display on the battery so that you know how many of its 99 units you have left.

What’s more, you don’t have to panic if you can’t remember turning the battery off. It won’t be draining down without you because it decently switches itself off when not needed.

But – and this is really crucial – when you’re out riding, the units clock down more and more quickly as the charge depletes so, just because the display tells you that your outward journey consumed 48 units, it doesn’t mean to say your return will do likewise on the same charge. It won’t. If your muscles aren’t forced out of semi-retirement long before you reach your destination, it’ll be nothing short of a miracle.

Also, while you shouldn’t have power issues on predictable and familiar journeys, different terrain might make different demands, whatever the mileage. I advise caution in these circumstances.

There’s no reason to be at all scared about operating the bike, even on first pedal: the motor kicks in smoothly and politely, and without a lurch.

If I had one issue with the motor, however, it was this: when I was scooting on the bike, i.e. with one foot on the left pedal, and the other toeing along the ground (typically when there wasn’t enough room to overtake walkers instantly and with a wide berth), if I didn’t keep the left pedal completely still, the power took me from a trickle to a slight surge forward.

The cure lay in refining my bike handling technique, but I did become even more wary than I already was around pedestrians in shared spaces. This is rather ironic – the bike made me way more assured when overtaking buses!

For the City’s finer technical details, have a look at Gtech’s website, but I will say here that the components and manufacturing both struck me as good quality.

I was particularly impressed by the tyres. I meet with all sorts of sharp objects on my route – broken glass outside pubs, thorns, gravel etc. – but I haven’t had a single puncture in weeks of riding.

The clean, quiet carbon belt drive was a bonus too.

For me, then, the bike’s fittings had no major downsides, except that I kept wishing mudguards came as standard. Ordering them separately and fixing them on is always a bind as far as I’m concerned.

Yes, I like disc brakes, and this bike doesn’t have them. The Tektro ‘V’ brakes it does have are excellent, though, so it didn’t bother me.

And, yes, I missed gears. Yet, within days, their absence didn’t matter all that much to me either. I can’t say it didn’t matter at all, because there were times when my instinct was to change up. But, conversely, I didn’t need them for hills.

Hills?? Remind me, someone!

The future of mobility: electric cars and vans... or bikes? View

Guide to electric bikes View
Cycling UK continues to support the UK to cycle
This remains true during this difficult period with the ongoing threat of coronavirus Covid-19
Read our latest advice on cycling
Join Cycling UK to help us change lives and communities through cycling
Membership gives you peace of mind insurance, discounts in cycle shops, rides & routes
Join now