To mark Father's Day Paralympian Karen Darke pays tribute to her dad Mike Darke, who had a stroke but was determined to get back on a bike. Last week, aged 79 Mike set off on his own challenge to cycle 79 miles to help his daughter's fundraising project for The Spinal Injuries Association Quest79.

The thing I love most about my dad? It has to be his stubborn determination.

I wanted to cycle Alpe d’Huez too. My dad and brother had sweated their way up it the previous day, and rather than put me off, their stories fuelled me with excitement to do the same.

“I could borrow your bike and go up in the morning” I suggested hopefully.

“It won’t fit you, and I want to get on the road early tomorrow” he shut my ideas down, but I had stubborn determination in my paternal genes. I was already scheming a 4am start, to be back in time for breakfast baguettes and jam. I was seventeen, eager, physical, headstrong, and desperately wanted to be like my dad and tackle the slopes and switchbacks of one of the Alps most notorious climbs.

Every summer we went on a family holiday and thanks to my dad, we’d find ourselves ‘accidentally’ camping in the Alps at the same time as the Tour de France was due through. That year we had caught a stage of the Women’s Tour too. I felt inspired, though I wasn’t really a cyclist back then. A bike was my dad’s thing.

My childhood memories are filled with cycling; Dad rushing out after work to do the local Aussie Pursuit or join the Calder Valley chain gang.

At weekends he left early to meet the club for long Sunday rides in the Yorkshire Dales, and returned with stories of random cafes in rustic sounding villages like Barnoldswick, of how many bacon rolls and slabs of cake had been consumed.

In the winter he would often return like an injured Spartan, sodden and near-hypothermic after hours of pedalling in puddles and rain, and he would stagger, stiff and bent as if still sat on his bike, into a hot bath.

If it was December and the ride involved pubs, he might arrive cold and dripping on the doorstep, drunk with blood trickling from his side. ”I just stopped on this track because I needed a wee” he would explain, “and the gravel threw me off”, a few pints in the system never the reason for crashing.

He gave it up for a while, whilst we were very young. Lycra and cleats were traded for bells and breeches; bike riding was replaced by clog dancing, deemed a more family-friendly activity. Looking back, I’m not convinced that wandering the damp streets of Yorkshire villages and sitting in pubs watching bearded men drink a string of pints whilst nasal singing was a childhood dream, but at least we were out experiencing life, not deserted in front of a telly.

My dad never abandoned the saddle though. He would regularly ride thirty miles of suburban clutter to his job in Leeds, and another thirty home again. “Work hard, play hard” was his mantra, an ethos he demonstrated well, and transmitted to my brother and I.

He would talk about his teenage bike tours, hostelling through Derbyshire and stuffing tyres with grass because he couldn’t afford new tubes, and newspapers down his shirt because there were no such things as windstopper jerseys. He reminisced of his racing days, of meagre prize money that wasn’t allowed and of being banned from UCI amateur racing for once accepting a £5 prize.

His bedtime stories were never from books, but fictitious tales of ‘Bill and Ted’, two characters that went cycling with nothing to eat by a stale loaf of bread, and who stayed in haunted Youth Hostels; the ghosts always turned out to be something like an old tin can rattling on the wall, and clearly Bill and Fred were my dad and a mate.

As we became teenagers, my brother Simon became a cyclist too. Together they rode Lands End to John O’Groats, supported by a camper van full of smelly men, fusty lycra, and breakfast fry-up fumes. They went to the pursuits and chain gangs together, and Morris Dancing was no more.

At weekends, my mum and I would cheer them both on in races, a father-son MTB team riding for Orange, my brother smashing it whilst my dad laughed and crashed his way round, bumps and blood the norm for him. My brother made the Yorkshire Junior Road Squad, and then rode for British Cycling at the World Champs in downhill. There was no pressure or obsession; it was always for the fun, for the stories, for the love of it.

In 1993, my dad didn’t get to ride much. He was too busy commuting to a Spinal Injuries Hospital in Wakefield, supporting me through recovery from becoming paralysed in a rock-climbing accident. As I adapted to my new life, the ingredients I’d grown up with - his passion and grit for cycling - began to work their magic and it seems obvious looking back, that hand-cycling would become my sport.

Years later, 2010, and I was on my first foray with the British Paracycling Team. It was a training camp based at Lake Garda, Italy, and on day 2, one of those dreaded phonecalls came from my mum. “Your dad’s in hospital. A stroke. They think that’s why he crashed his bike last month…”

Difficult times always, weirdly, bring good times too. We gained rare family time together, and though my dad was told he’d never walk unaided again, and certainly never have the balance to ride a bike, we saw the daily progress, and were thankful for all that he could do. Perhaps me being on a handbike spurred him on to see there was a future, no matter what his physical abilities may be. Out of hospital, a bike on a turbo became his daily physio. “Ten minutes spinning a day” he told me in his slurred voice, and sure enough, the zimmer rapidly got ditched. He saw every day as a bonus, and has lived that way ever since.

Last week, my dad aged 79 years old, cycled 79 miles from his home in Yorkshire to Blackpool.

Last week, my dad aged 79 years old, cycled 79 miles from his home in Yorkshire to Blackpool, to help me raise £79K for the Spinal Injuries Association.

Despite buying an electric bike last year. He still refuses to use it. “Maybe when I’m 80” he says. Cycling is his therapy, and sanity, the bike a fount of life. He will ride forever, and somewhere beyond his living days.

Thanks Dad, for the genes (and Mum, for being the hub of our cycling family!).

Karen Darke MBE is a Paralympic Champion in hand-cycling, she won Gold at the Rio 2016 Paralympic Games and also goes on intrepid cycling adventures. Karen is a member of the Adventure Syndicate, which is affiliated to Cycling UK. 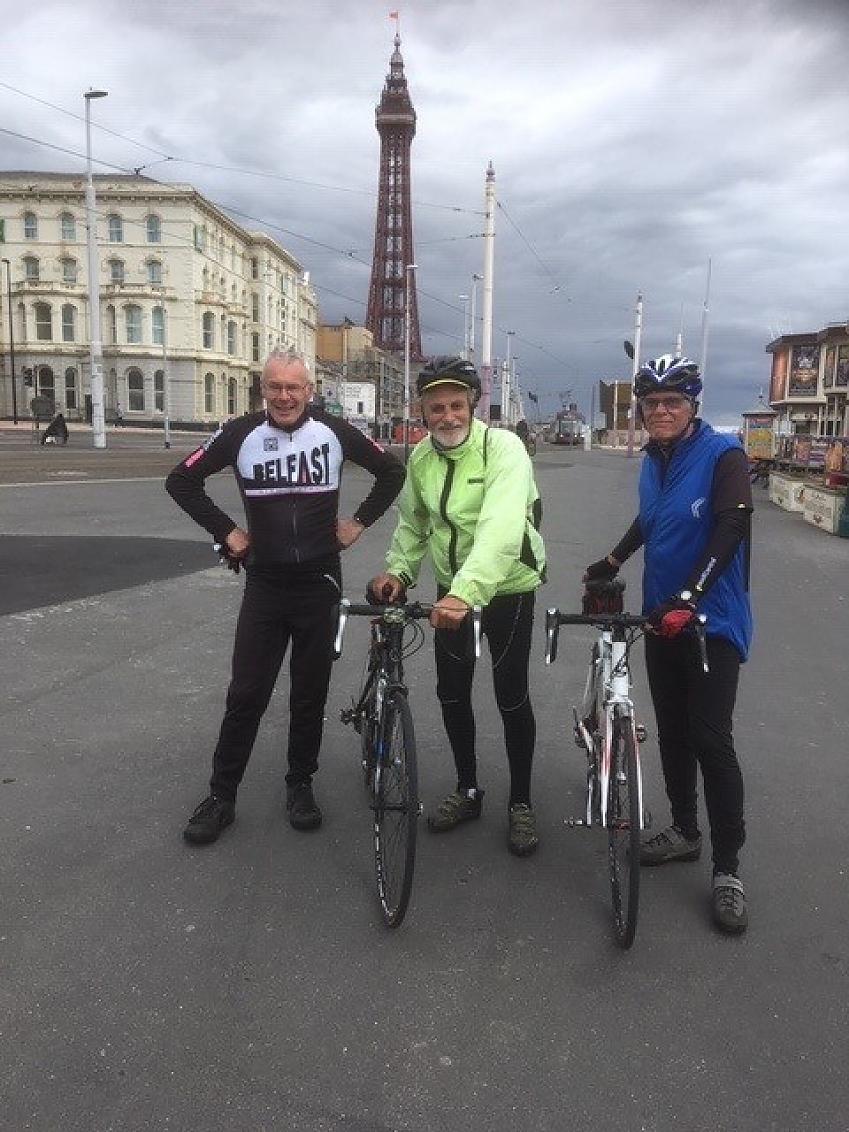 In the Rio Paralympics, 2016, Karen won the 79th medal for Britain. It was a Gold medal and 79 also happens to be the atomic number of gold. Karen then set up ‘Quest 79’  to raise £79K to support the Spinal Injuries Association.

Anyone can take part in Quest 79.