Has the pandemic kickstarted a new era for cycling?

Has the pandemic kickstarted a new era for cycling?

Since March when lockdown restrictions began, cycling’s star has risen in the political, popular and news agenda.

It hasn’t been because of gold medals, yellow jerseys or popular sporting events where our athletes have covered themselves in glory - although I like you have missed those Olympic and Tour de France moments.

Instead, it’s been because of the activities of the everyday member of public – the regular and irregular cyclist, the family which ventured out on the empty roads for the first time and the thousands of key workers who took to two wheels rather than run the risk of passing on the virus to others on public transport.

This pandemic has opened the eyes to decision makers and the wider public that cycling doesn’t just give a break from the worries of the world, but it also presents a part of the solution to them.

From being the best way to practise social distancing for short journeys, to its benefits for our physical, not to mention mental wellbeing, to its part to play in addressing our concerns about air quality and the environment, getting more people cycling is a miracle pill.

Today’s announcement by the Prime Minister shows this government isn’t just willing to stock the right medicine for England, but also willing to prescribe it.

The government’s new plan is a truly comprehensive and far reaching set of measures announced to improve cycling and walking in England. It places cycling at the heart of our towns and cities and aims to make it safer and accessible for everyone – not just the regular cyclist but the would be one too.

The government’s new plan is a truly comprehensive and far reaching set of measures announced to improve cycling and walking in England.

Given the breakthrough in the nation’s attitudes, you’d be forgiven for thinking today’s announcement – this smorgasbord of positive change – was crafted in recent weeks.

The impetus that has brought it all together is new, but the work behind these changes has been years in the making. The cliché of devils in the detail plays false here, as the future we’re looking at is more celestial than infernal.

Two years ago, the government held its Cycling and Walking Safety Review. Cycling UK replied in depth and at length (if you’ve time you can read our 165 page response).

What we’ve seen today is many of those recommendations finally translated into policy which will make cycling safer, particularly in the consultation on the Highway Code.

Together with Living Streets and traffic engineer Phil Jones, Cycling UK has worked closely with the Department for Transport to shape the recommendations contained in the consultation, that if agreed upon will make cycling safer.

There are 10 recommendations which stand out. Many of them will be familiar to our supporters, such as the proposals we’ve been leading on around close passing and car dooring, but there are many others like the creation of a hierarchy of responsibility to bringing us in line with best practice at junctions, that are new and if passed will make a difference to the way people cycling are treated on the roads. You can support our call for these to become a reality via our new Highway Code campaign.

Of course, at the end of the day, the number one thing which will keep people safe, and more importantly give the would-be cyclist the confidence to head out on the roads, is protected space.

For too long, there has been an inconsistency in the very design of our cycle networks and cycle lanes. That era is coming to an end as there are now national design standards for cycling infrastructure. This means schemes which consist mainly of paint, which make pedestrians and cyclists share the same space, or which do not make meaningful change to the status quo on the road, will not be funded. The challenge is now for local authorities to think big and show the same leadership as the Prime Minister.

These standards will be overseen by a new inspectorate, Active Travel England, which will be responsible for the cycling budget and help make sure schemes meet the new standards.

We can’t expect dramatic change overnight – the likes of Amsterdam and Copenhagen were not built in a day – but this vision looks ahead at the next decade and has the support of the active travel organisations like Cycling UK, Bicycle Association, British Cycling, Sustrans, Living Streets and the Ramblers more to deliver it.

We can’t expect dramatic change overnight – the likes of Amsterdam and Copenhagen were not built in a day.

However, while local authorities begin the building we need for a happier and healthier future, there are measures in place like the Highway Code which will make a more difference to the way the nation of England actually begins to perceive cycling.

Everyone – from all school children to adults – will be able to access cycle training.

There will be an increase in cycle parking at train and bus stations, allowing for a greater integration between transport modes.

Residents will have the power to call for an end to rat runs through their local streets.

Local authorities will have the powers necessary to crack down on traffic offences, like parking in cycle lanes.

We’re also promised measures which will increase the public’s access to e-bikes, which rumours suggest will be akin to the government’s plug in grant scheme for electric cars. 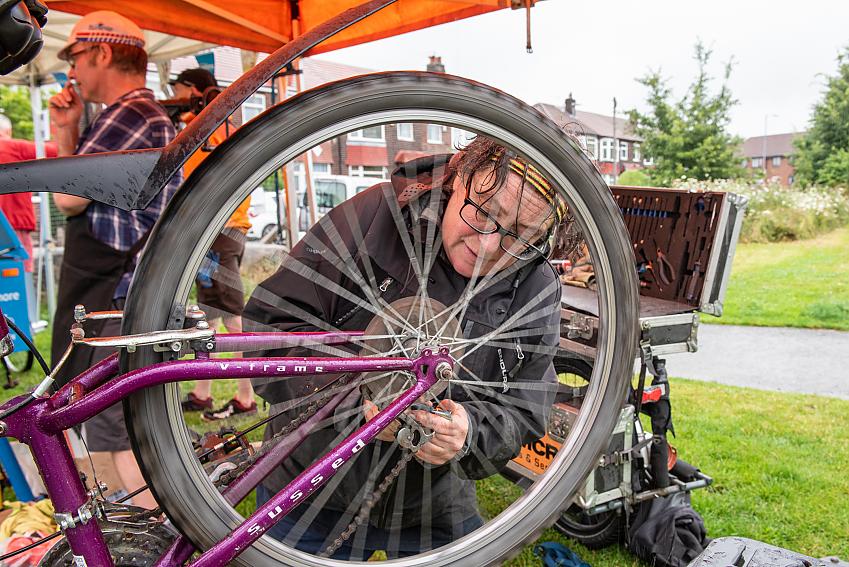 Cycling UK's Big Bike Revival will be running throughout England, and estimates it will benefit 100,000 people.

All of which doesn’t even begin to mention the extra funding for the Big Bike Revival which Cycling UK delivers, that will allow us to set up thousands of Dr Bike pop up events around England. We estimate that more than 100,000 people will benefit from our work – and those bikes we can’t fix right away will be referred straight on to the Government’s £50 voucher scheme in a bike “triage”.There is a lot to celebrate today, as we have seen the culmination of many years of hard work result in this remarkable shift in the government’s attitude towards cycling.

One thing however has not change. Funding. The Prime Minister has set out an impressive shopping list, for sure the £2bn for this year will kick start this, but there is no new money in today’s announcement. It is the same £2bn announced in May and February before it.

If we are to truly shift gears so that everyone can feel the transformative benefits of cycling, we need proper ‘long term’ investment to the tune of £6bn to £8bn over the next five years.

For me the game is afoot - we have a vision – and a Prime Minister who has previous for putting his money where his mouth is when he was Mayor of London. So it’s now time to ‘double down’. This autumn there will be a strategic spending review, and that will be the time for the Chancellor to invest in the future and make the Prime Minister’s vision of a golden age of cycling come true.

Can we keep the bike boom on track? View

How Cycling UK's pop-up Dr Bike sessions are the first line in bringing bikes back to life View
Cycling UK continues to support the UK to cycle
This remains true during this difficult period with the ongoing threat of coronavirus Covid-19
Read our latest advice on cycling
Join Cycling UK to help us change lives and communities through cycling
Membership gives you peace of mind insurance, discounts in cycle shops, rides & routes
Join now