Too Close For Comfort

Why we're campaigning on close passes

Close passes are not only really intimidating, but also dangerous: police attribute "passing too close to the cyclist" as a contributory factor in a staggering 25% of serious collisions between cyclists and large vehicles. At the same time, we know that 62% of people in the UK consider cycling on the roads ‘too dangerous’. If we want safer roads for cyclists as well as more people cycling, putting an end to close passing is absolutely key, and Cycling UK’s Too Close For Comfort campaign does just that.

Too Close For Comfort was inspired by the pioneering work of West Midlands Police, who used plain clothes officers on bikes to identify dangerous passes. The offending drivers were offered education on how to pass cyclists safely and – in the most serious cases – prosecuted for careless driving. The operation was a huge success, and the number of collisions involving the death or serious injury of cyclist dropped by 20% in the first year.

By delivering 'close pass' mats used for driver education to police, the Too Close For Comfort campaign has encouraged and empowered forces from Scotland to Surrey, Wales to West Yorkshire and Belfast to Brighton to run similar ‘close pass’ operations, and we now see police forces throughout the UK running regular operations and engagement sessions addressing this serious issue, when only a few years ago it wasn’t even on the many police forces' radar.

Building on this success, we’ve now developed a virtual reality ‘changing perspectives’ film which allows a driver to experience a close pass from a cyclist’s perspective, and includes a demonstration of a safe overtake. This hugely impactful tool has, thanks to many donations to our crowdfunded campaign, already been distributed to police forces nationwide, who will deliver it to drivers in live operations and during educational events,

Despite Too Close For Comfort's great successes, and police continuing to run the operations and education, all cyclists know that there's still work to be done!

We're still working to ensure this virtual reality film is experienced by as many drivers as possible, alongside employers, police departments and local authorities to create a generation of drivers who understand why they should never pass cyclists too close for comfort.

Keep your eyes open for developments, and why not support our campaigning work by joining Cycling UK or show off to your friends with a lovely Too Close For Comfort mug, designed exclusively in support of the campaign by cartoonist Dave Walker. 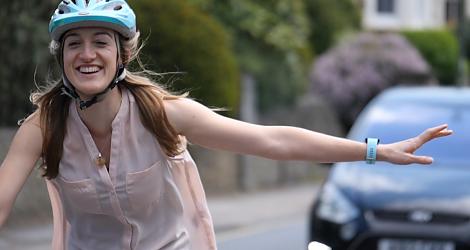