Flo (age 10) enjoyed using the cycle lane on Upper Shoreham Road, saying: "I can just cycle to school without having to worry about the traffic." Photo: Shoreham-By-Cycle
By Duncan Dollimore
Friday, 23 July 2021

In February, Cycling UK applied to the High Court for a judicial review of West Sussex County Council’s (WSCC) decision to remove a cycle lane along the A270 Upper Shoreham Road in Shoreham.

The timeline of events leading to court action is set out in the sidebar of our press release, with the grounds and our reasons for doing so summarised in this frequently asked questions document.

In a nutshell, Cycling UK believes that WSCC failed to have regard to or comply with statutory guidance, acted irrationally given that its own information did not support the reasons given for the removal of the lane, and breached the public sector equality duty, with information available to it that the lane was especially beneficial to children accessing local secondary schools.

Losing the battle and winning the war

Litigation can, however, sometimes be a bit like campaigning: you’re never certain of the outcome; sometimes you take a step backwards before you move forwards, and occasionally you lose the battle before you win the war.

The first stage in any judicial review case involves a Judge deciding whether to grant permission to allow the case to proceed to a full hearing, and on 26 May the High Court refused Cycling UK’s application for permission.

Although undoubtedly a setback, we appealed that decision to the Court of Appeal after considering legal advice. We can’t be certain when that will be considered, but the best guestimate is some time around September or October.

But Cycling UK isn’t the only litigant taking councils to court to challenge the removal of active travel infrastructure.

I’ll revert back to matters Kensington later, because there’s another judicial review that hasn’t hit the news. As this one’s less well known, so I’ll have to give some background.

Cars squeezing through a keyhole

In August 2020, Keyhole Bridge in Poole was closed to motor traffic under an experimental traffic order (ETRO). Pictures tells a thousand stories, so there’s some below which show just how narrow this bridge is, and what it’s like for pedestrians and others to ‘share’ that bridge with cars. 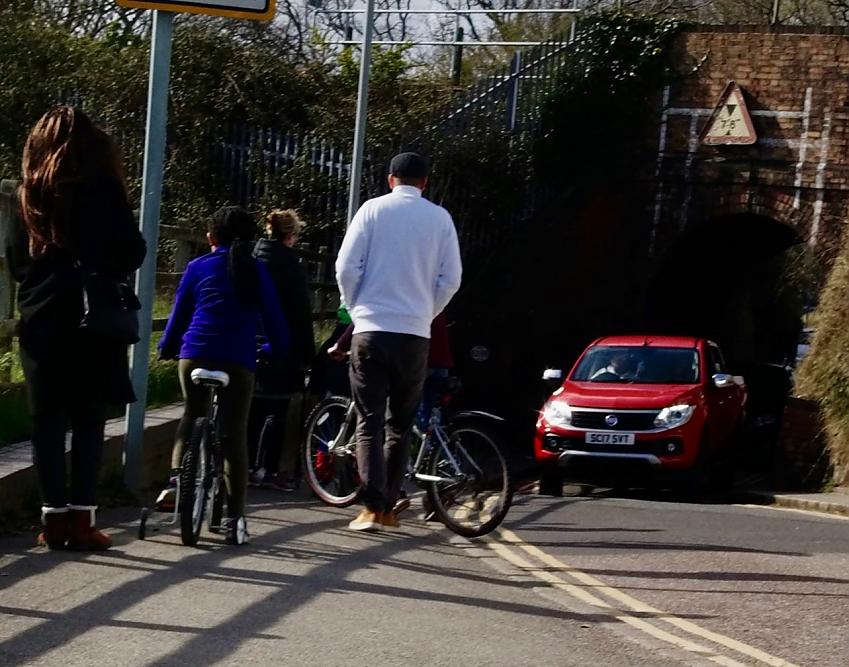 On Google maps you can see Keyhole Bridge between the two boating lakes, on Whitecliff Road as the road goes under the railway line adjacent to Poole Radio Yacht Club.

Whitecliff Road is an unclassified road with two-way traffic and a 30 mph speed limit. It’s 2.7 metres wide with no pavement, just a narrow ledge with a maximum 46cm width on one side, and limited visibility, particularly for pedestrians.

There are no traffic controls apart from advisory signs, so people wanting to pass through end up congregating on the pavement either side of the bridge trying to wait for a break in the traffic.

For those walking and cycling, the bridge provides access to three parks and a route to and from amenities including a hospital, college and a school, but many didn’t feel safe to use it because Poole Park had become a rat run, with 500 cars an hour passing through at peak times.

Removing modal filters before they've had a chance to bed in

Last August, Bournemouth Christchurch and Poole Council (BCP) did the right thing, and made an ETRO, installing a modal filter – better described as big square planter box – to block motor traffic passing through the bridge, whilst allowing people walking, in wheelchairs or cycling, to pass through without worrying about their safety.

It was hardly an inconvenience to people driving, because it added 0.25 miles to their journey when they could no longer cut through the park to avoid the gyratory system.

Yet in January, Transport Portfolio holder Mike Greene decided to remove the planter, despite officer advice, the equalities impact assessment, and public opinion all favouring the filter remaining in place.

The closure of this bridge to motor traffic made it safer for people who weren’t driving, and five months’ consultation showed 67% people in favour of retaining the filter, including the majority of residents.

But in March the planter was taken out, and people are once again queueing to take turns to drive though a narrow bridge built in the 1880s - when it was designed for carriages not cars.

The local campaigners doing their bit

So, credit is due to the Keyhole Bridge Group,, who issued judicial review proceedings last month against BCP. I won’t attempt to fully outline the legal grounds, but they include arguments that BCP breached the consultation requirements, failed to take into account material considerations, and acted irrationally.

Meanwhile, BetterSteets4KC are having to deal with what can only be described as bullying tactics by RKBC.

I’m not going to try and recount fully the story about what happened in Kensington, because it’s set out in detail on BetterStreets4KC’s website.

For those who don’t know the background, however, the short summary is that RKBC removed the protected cycle lane from the High Street in December 2020, before it was fully installed and after just seven weeks.

BetterStreets4KC then instructed the Environmental Law Foundation (who are also assisting the Keyhole Bridge Group) to send a pre-action protocol letter threatening legal action, so RKBC agreed in January to review its decision to remove the lane. They then reviewed that decision in March, reached exactly the same conclusion, and BetterStreets4KC have now gone to court.

Of course, one thing that the judicial review challenges in West Sussex, Poole and Kensington all have in common is that they are all about measures to enable more active travel, which has environmental benefits. Indeed, air pollution is mentioned in the paperwork in all three cases.

That’s relevant because under the Aarhus Convention, claimants in judicial review cases which involve environmental issues are normally entitled to a cost protection order, limiting their liability to pay the defendant’s costs if they lose.

I know BetterStreets4KC are contesting RKBC’s application, but I’d suggest that the stance RKBC are taking towards costs, in seeking to hold individuals rather than the campaign group personally liable for costs, speaks volumes about their approach to the consideration of any view different to their own.

The security for costs question and costs protection is likely to be considered when the High Court considers BetterStreets4KC’s permission application, which has not yet been determined.

In view of this, BetterStreets4KC have just launched a fundraising call to action.

And that takes me back to West Sussex and Cycling UK’s judicial review.

We’re obviously disappointed that we lost in the High Court and have had to take the case to the Court of Appeal. However, the issues involved in this case and in both Poole and Kensington are too important for us just to roll over. Allowing these councils to remove cycle lanes and other active travel infrastructure without regard to guidance, legal obligations or due process could threaten cycle provision in other places.

But, as will be clear form this article, litigation is costly, uncertain, and carries risks, so we can’t fight cases like this without your support.

We’ve funded this litigation through our Cyclists’ Defence Fund (CDF), which exists to help fight significant legal cases involving cyclists and cycling, especially those which could set important precedents for the future and could affect the safety of all cyclists.

We can only carry on doing this however with your support for CDF, so please contribute if you want us to keep fighting not just for people who already cycle, but those who can’t or won’t - but might, if councils like WSCC, RKBC and BCP didn’t make irrational decisions.