Yes, they can and should, says Cycling UK. Today (20 November) is the Transport Planning Society’s Transport Planning Day, and they’re using it to reward recent housing developments designed to help residents think walking, cycling and public transport rather than driving. Cycling UK’s Cherry Allan looks into the motives behind it, and the shortlisted entries.

Some extremely organised and possibly rather irritating person once said, "if we fail to plan, we plan to fail."

So true. Who wants to end up with no sprouts in the house on Christmas Day? (If you’re saying ‘Yuk, yes I do!’, feel free to substitute a festive vegetable more to your liking).

Regardless of our propensity to succeed or fail on the sprout front, planning our everyday lives is at least a fairly easy concept to grasp.

Today (20 November) is Transport Planning Day, a good day to muse on the impact that this particular beast – and it is a beast – has on almost every one of us.

Firstly, I think we need a professional definition of ‘transport planning’. The Transport Planning Society (TPS) says that it is  “… all about creating connections between people and places, without which everyday life cannot function.”

That’s so beautifully put. So simple. But, as the Society stresses, it’s not a simple thing to do at all, partly because “Transport is almost entirely generated by where people and places are located.” Again, a very simple statement; self-evident, even. Where’s the complication for active travel, then?

Well, guess what’s most likely to happen if a council votes in favour of a new housing estate miles away from the nearest town and railway station, allows for no high street, few services and amenities, and invites developers to go wild with garage and car parking space?

What if its transport planners cater for all the extra traffic by constructing major roads and plonking nasty junctions at every exit? What if they’re remiss about footpaths, cycle-friendly routes and cut-throughs, and decide that buses need only call every other Friday?

The built environment will be saying “drive, it’s your only choice; your everyday life can’t function if you don’t”, that’s what will happen.

It’ll be saying don’t cycle to the shops; don’t walk to the bus stop – you’ll be lucky to find one anyway; don’t meet your recommended physical activity guidelines; forget any ideas about passing on a clean and liveable planet to future generations. 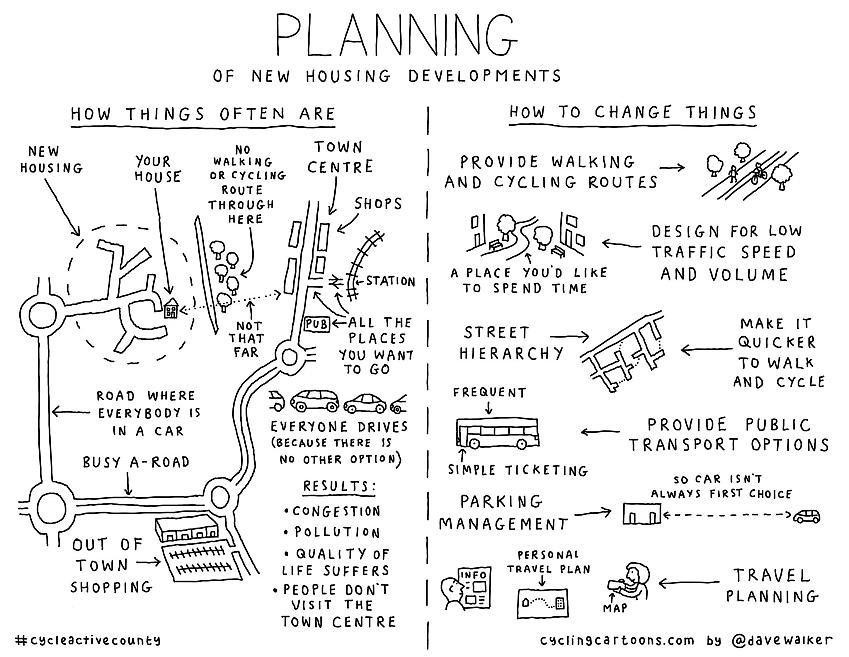 The alarming thing is that this seems to be exactly what some transport planners want new settlements to say. They’ve planned for car traffic, but seriously failed walking and cycling.

Equally alarming is the fact that all too often their colleagues across the way in departments dealing with how, where and why land is put to use, and developers themselves, don’t, won’t or can’t raise an eyebrow. Either that, or their eyebrows, if they’ve been brave enough to raise them, have got them nowhere against the transport planning might or, indeed, national and local planning policies and frameworks that shape all decisions on development.

This is yet more alarming when you consider the huge pressure on local authorities to meet their current housing targets, and the fact that you don’t have to go far to find a local community fearing for their quality of life because a development project nearby will generate so much more motorised traffic.

Indeed, Cycling UK’s own research, to be published soon (with case studies), proves that the alarming catalogue above is the norm rather than the exception.

Planning is a beast, as I say. But is it incorrigible? No. Although we may not see it as often as we’d like, it does have a sunny side and Transport Planning Day is all about winkling it out and capitalising on it.

The TPS has thus partnered with Transport for New Homes (TfNH) on an award for recent housing developments that “buck the trend for out-of-town car-dominated estates, places where real attention has been paid to sustainable transport and quality of life.”

The way we combine new homes with transport will determine how we travel and therefore the way we live for decades to come. Cutting back on car use and instead being able to walk, cycle or use public transport on a daily basis is all part of the lower carbon and healthier lifestyle that many people aspire to.

The shortlist, nominated by professionals, housing developers and the public, boasts five new developments of over 500 homes, and here I’ve picked out a few prizewinning aspects of each that TfNH has highlighted and which resonate especially with Cycling UK:

It is unlikely, of course, that all of these sites enjoy unqualified critical acclaim, either from those who support their approach or from those who do not - Poundbury, which first arrived on Dorchester’s scene in 1993, is a case in point here. Also, it’s one thing to read about a development’s ethos and aspirations, and another to experience what it’s like to live there.

That said, between them these sites all exhibit principles that Cycling UK wants to see in all new housing developments all over the UK, eg:

All this amounts to emphasising active, sustainable travel to prospective purchasers and facilitating it once they’ve moved in.

It also amounts to wise decisions on investment in infrastructure and messaging, something we’d also like to see repeated ubiquitously and championed by all our politicians, including our new MPs – so watch out for our imminent General Election campaign.

With that, we’ll be creating healthy environments to scale with human being and lifelong connections between people and places, without which everyday life cannot function. Planning, indeed, to succeed.

It’s Road Safety Week and the organisers Brake are urging everyone – including professionals – to step up for safe streets and celebrate best practice from a road safety perspective.

From racer to illustrator: meet the Cycling Cartoonist View